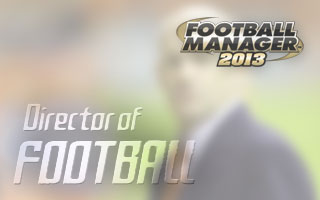 FM 2013 is a remarkable iteration in the Football Manager series - not only do you get a 'Classic' version of the game (catering for the nostalgic fan) but you also get the most in-depth football management simulation. The game is somehow more intuitive and easier to play than last year despite being more complex and rewarding. When that happens, you know the developers have got it right.

Personally, the most fun part of Football Manager (after getting your tactics spot on to beat Man City 7-0, that is) is football transfers. I'm not talking about buying your favourite footballers - FM is more than that and if you want to support your favourite footballer you could vote for them on FootballTop.com or stalk them on Facebook - but about building a team that plays according to your vision, and also building for the long term. In this regard, Football Manager 2013 has introduced the Director of Football, who, while not being perfect, is a great asset in FM 13 if used correctly.

The Director of Football post in FM 13 means you can hire someone (or they may already be at your club) to handle most of the transfers - getting rid of players you don't want, negotiating loan deals for promising young players, working on recruiting transfer targets.

However, it's not smooth sailing - so let's look at the whole process - from hiring a DoF to giving assignments and how to maximise the value you get from him.

Hiring a Director of Football

By far the most important role the DoF will play is in finding and buying quality players for your youth team. Therefore you're looking for someone with good scouting stats (determination, judging ability and potential, widespread scouting knowledge, adaptability) as well as someone who can read your tactics to buy suitable players (tactical knowledge) and finally, someone who is good at negotiating transfers (determination, motivating, reputation).

Also, while we're not talking about scouting specifically here, the Chief Scout role is another excellent addition to the back room staff, acting as a buffer between the scouting team and the manager and automating several tasks - filtering and collating scout reports, assigning scouts to different regions, selecting which scout to use when you ask for a player to be scouted and, of course, creating a pool of scouted players for you and your DoF to work from.

You can instruct your DoF to automatically recruit players for the youth team - when this is active at the start of the season, your DoF will use your club's scouting network (and also their own knowledge) to highlight the best young prospects and bid for them. You get notifications as these deals are in process, which allows you to keep an eye on which players the DoF is negotiating for / with.

Since the DoF primary strength lies in spotting talent, not signing it, you'll find that sometimes the DoF will withdraw from negotiations because either the selling club or the player are asking for too much money. This is where you need to step in and manage - evaluate if the targeted player has the qualities you'll need in a few years' time at your club, and decide if you can spend extra to secure their services.

You can also use your scouting network to find potential recruits and assign them to the 'transfer targets' list - which essentially instructs your DoF to make a bid for the player. As all clubs want to sell their players at a profit, your DoF will fail here more often even if you have sufficient transfer funds - and again this is where you need to step in, evaluate what the selling club or player is asking for and make a decision.

Set any player you've scouted and would like to add to your squad to the transfer targets list and the DoF will work towards speaking with the other club, negotiating a transfer fee and then negotiating a contract with the player.

In an ideal world this should relieve you of all transfer duties but depending on your DoF's stats, he may frequently break off negotiations if the asking fee is too much or if the player's demands are too high.

Usually the DoF is right - there's no point in grossly over-paying for a single player or setting impossibly high wages (your wage structure may not support it either) - but if you feel that the player is a 'must-have' (avoid going after your 'favourite' players) then you could take over negotiations yourself and try to sign the player.

And if you've asked the DoF to scout and recruit players for the first team, he will be working away in the background reviewing where the team needs reinforcements (maybe in coordination with your management staff) and find players to bring in the transfer windows.

Players fall surplus to requirements, it's a fact of football management - here the DoF is useful in automating the task (provided you set the right rules). Setting the player at 'any price' is usually not a good idea at any point - set the player to be sold at value and you will, more often than not, get at least the market price for the player.

The greatest value you can out of this is automation - no need to repeatedly offer the same player to clubs when the DoF can handle everything (including selecting the right incoming bids).

But if you (or your predecessor) had signed players that are complete duds, or players on very high wages - then there's very little that the DoF can do about them, and you may need to sell the player cheaply or use them in the squad until their contract runs out (or a bid comes in).

Sending players out on loan

You can add your players to a 'development list', which instructs the DoF to find suitable clubs for the players where they can play in the first team. You also have the option of offering players on loan directly and set the squad status requirement as 'first team' or 'key player' (the only useful settings in that list).

When you have a handful of young players going out on loan each year, it can be time-consuming to manually work through each loan bid - the DoF takes care of this for you.

However, I did find myself looking through the loan bids for the brightest prospects to ensure that they were going to the right club where they would get a good mixture of playing time and competition difficulty - it's no good sending a good youth player on loan to a Blue Square Premier club if he's going to score 40 goals and be bored out of his mind.

Firing your Director of Football

In real-life football, the DoF sometimes has more power than the manager. Luckily the developers of FM 13 have more sense and have given the power to hire and fire DoFs to the manager - meaning that if your current DoF isn't working out for you and you think you can replace him with someone who has more knowledge / better negotiating skills / higher reputation, you can do so.

All in all, the DoF is just one of the many ways that FM 13 is more realistic, more engaging and also easier to use. If you have any additional comments to add about the DoF aspect of the game, do share them in the comments section below.

This article was contributed by Soccerlens.com.

Discussion: How to use the Director of Football in FM13