Search
FM Scout is the only community you can talk Football Manager in real time. Here are 10 reasons to join!
Home › Articles › Opinion › Mark's Your Man ↓ 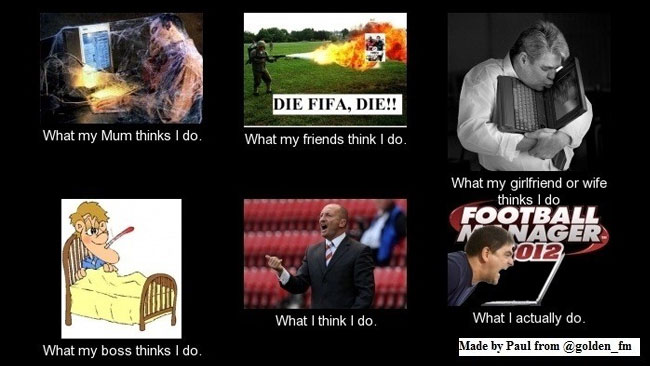 So to all those reading this article / report, it is focused around the Football Manager addiction, my experiences recently, your experiences and views, and a look at the future.

Using our social reach, we asked a few questions and received numerous replies. You'll read some of them along the way.

After FM 2012 I felt jaded, I’m pretty sure a lot of you guys have felt the same regarding specific genres, or even Football Manager. Over the last four versions of FM I have spent over 3,614 hours / 150 days / 21 weeks / 5 months of gameplay in 4 years (from FM09-FM12). On top of this, I put 24 hours into gameplay whilst helping with the closed beta of FM12 on behalf of FM Scout (at the time of writing this). Seems like a hell of a lot, right?

I have played football management simulators since 2004, and have seen the changes from commentary only to a good looking 3-D engine for what it’s worth. Over the years, FM has allowed me to gain intimate knowledge of football across the world: along with watching it, the crossover of reality and the game transformed me into a football boffin in a way.

In a way it affected my education in college, less so at university due to spending a lot of that time playing in recovery from my Tibula & Fibula break. But, to me, FM itself seems to have hit a sticky patch, not that I blame them. I mean, it’s not exactly a genre that can go on forever in terms of innovation. The game itself is probably not progressing enough innovation-wise every year to warrant another buy every season (Much like the FIFA games, and Call of Duty games).

So, I decided to take a sabbatical and, for the first time in 8 years, I chose not to buy or even play FM13.


I don’t regret doing the sabbatical; in fact I’d recommend it to those who feel FM is taking up too much of their down time. Perhaps it’s like being an addict in a weird way, I mean we all joke about FM and how addicting it is. But it actually can become a (weird but) mild addiction, and going cold turkey I would have to say helps.

Now I do intend to play FM 14, although not as much due to participating in the final year of my undergraduate degree. Hopefully I can gain the itch to play again in a lesser form, although I know a few friends who have lost the itch, even those who were more enthusiastic than me in the first place.