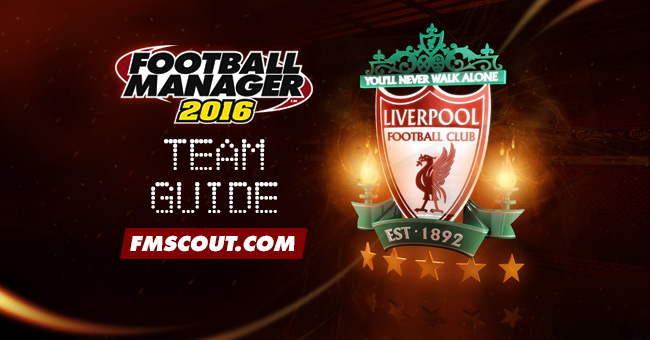 Liverpool in the past used to be the best team in England. Now, they seem to be contenders for a Champions League spot, but they often fall into the Europa League having only qualified for the Champions League once since the 2008/09 season.

Last summer, Liverpool spent heavily, as they aimed to get back into the UEFA Champions League. Players like Benteke, Milner and Ings were added for depth and strength. They spent a total of £77m on new signings, but are still to await the results of Ings' tribunal. 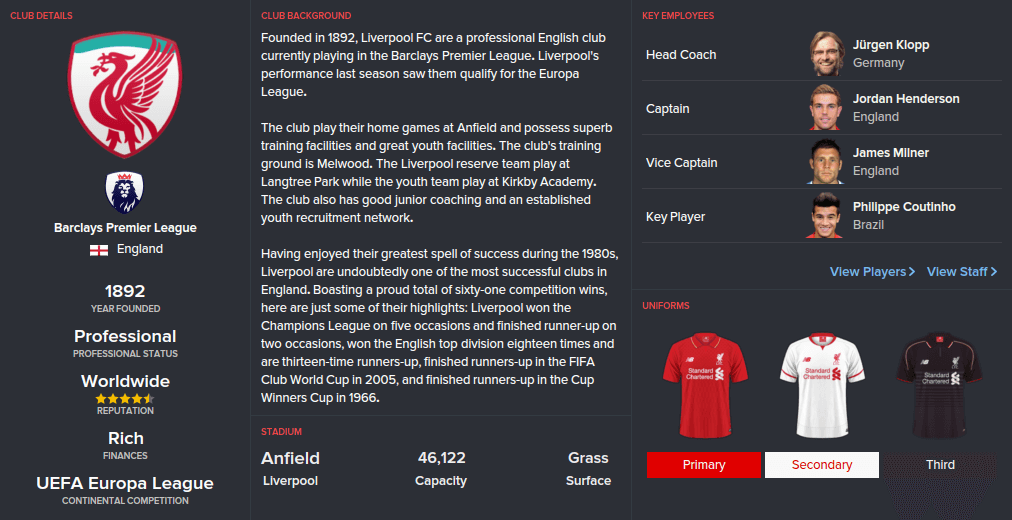 
Football Manager 2016 has changed the potential budgets, by giving you certain expectations for certain competitions.
Here they all are:

If you start on the 6th of July 2015, then your finances should be around £57.91m, if you start later it could be otherwise though.

The following suggestions for most fitting formations are based on the starting roster without making any transfers. 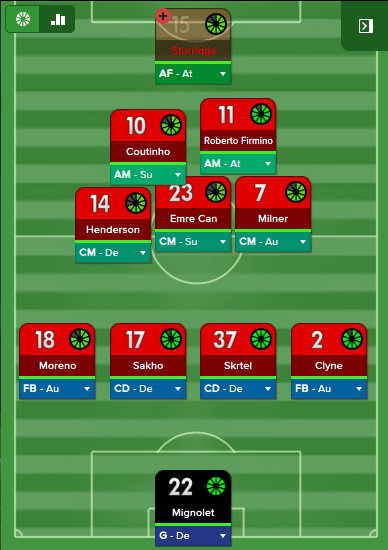 The advantage of this formation with Liverpool, is that you can use your CM quality, and the Brazilian CAMs to full effect, while having Benteke or Sturridge up front (depending on the role you need) as the tip of the tactic.

The disadvantage of it though, is that your young wide players would have to train to play as CAM, and then they would only be backup because the 2 Brazil CAMs are young, and are of top quality. 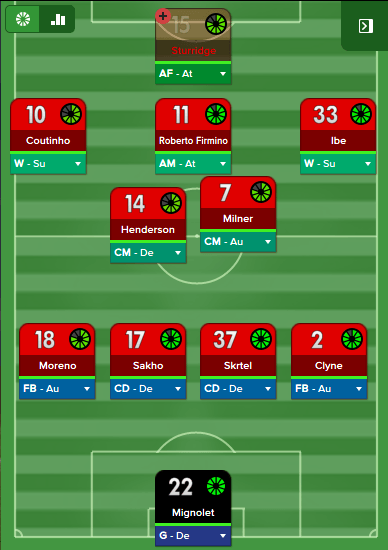 The advantage of this formation with Liverpool, is that you can use the wide players to get across and cross it in for the big man up front, or you can have them cut in and have a go themselves. You can also adjust it to have 2 DMs, 3 CAMs or both if wanted. The disadvantages, is that Liverpool don’t have a massive amount of Wing players (Ibe, Wilson, possibly Milner) so you would probably have to buy players there.


Goalkeeper:
Now, if you are like me, then you aren’t the biggest fan of Mignolet. He is a decent keeper though, so if you want to stick with him, go for it, and if you want to sell him, same. Bogdan isn’t a ‘great’ backup, but he is willing, and can do a job in times of emergency.

Left Back:
Liverpool have a great LB, who can stay there for years in Alberto Moreno. He’s young and has top quality now. Backups though, you’d struggle. The Aussie, Brad Smith is not bad, but personally, you’d want better. I’m not a specialist on LBs though.

Centre Backs:
Liverpool have a decent player in Lovren, a strong leader in Sakho and a tough defender in Skrtel. You can also do what Rodgers did and play Can there, but it’s not recommended personally. A surprise mention I’m going to list, is Wisdom. For some reason, he turned out to be pretty good when I played him after his loan, he can play RB as well though, something to bear in mind.

Right Back:
Luckily, we have sorted this problem out in real life, with Nathaniel Clyne coming in replacing Glen Johnson. This gives Liverpool a steady base for the next few years. Ryan McLaughlin is a solid RB if you want a HG base, or even Wisdom as mentioned before.

Central Midfielders:
You got all sorts of options for CM for all situations here. Henderson, Milner, Can, Lucas, Rossiter, and there are surely more that I missed. A mix of experience and youth, as this shines out as one of Liverpool’s best positions.

Wingers:
This position is a weakness here at Liverpool, we have Ibe, Milner (possibly), and… Wilson? Not the most impressive of options. You do have guys like Markovic coming back on loan after the year, so that softens the blow a bit.

Attacking Midfielders:
Coutinho, Firmino, Lallana. These 3 are all you need for success. Coutinho has the dribbling skills, Firmino with the skills, and Lallana with the Supersub potential. There is also Teixeira for the people who want another option.

Strikers:
You have the injury prone Sturridge, the target man Benteke, and the backups Origi and Ings. People often ask to loan Origi, depending if you need him, reject or accept, your choice. There are lots of strikers there if you need them though, so that’s good.

LW/RW:
You have few options here, but lots of options are available like Feghouli and Lavezzi, the duo who are available on a Pre-Contract in January.

RB/LB:
Your 1st team is sorted, but backups are really needed, unless you want to rely on McLaughlin and Smith.

Liverpool are a fantastic team to play as, with their ability to have a good core of players to move on and options for different tactics. Use them to their strengths, you would be looking at UEFA Champions League football. Fail with your judgement of the team, and you could be sacked.

I encourage you to leave your thoughts and experiences with Liverpool in the comments!
Your feedback can be utilized to improve this guide.

Image Credits:
The Liverpool badge on the thumbnail picture is made by kitster29.