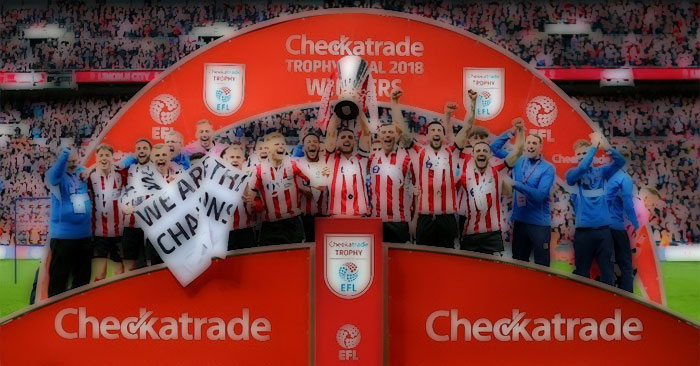 Hoist up the Lincoln flag. Hear the Red Imps sing. If you don't join in I'll sing on my own... This is the best trip I've ever been on.

More than 8,000 fans scream that signature chant for Lincoln City every other Saturday at Sincil Bank, as they cheer on their team in England's League Two.

That's right, 8,000 or more fans, every home game, in England's fourth tier. What's more, seven thousand of them are season ticket holders. What madness is this?

Well, just as that chant says, the Imps are on the best trip of their lives. This provincial team from the Midland backwaters is more used to the death grip of administration (twice in recent memory), relegation out of the league (again, twice) and an annual narrow escape from a plunge into the icy depths of England's regional divisions.

Not any more. Thanks in no small part to one Danny Cowley and his brother Nicky, both former PE teachers in their first job as professional managers, Lincoln City have in less than three years been revived from non-league no-hopers to become:

- champions of the fifth tier of English football
- quarter finalists in the FA cup, the furthest foray by a non-league club in a century
- Checkatrade Trophy winners
- League Two playoff contenders.

This very day, they sit top of their league and are the bookies' favourites to stay there.

But why manage Lincoln City? If the romance of their resurrection doesn't give you a story to work with, I don't know what you're looking for in football.

Romance, however, gets you nowhere in the cold, digital universe of Football Manager. You need some good footballers. I think they have that covered too.

Among the new faces at the bank this season are John Akinde, a frontman with a lower league pedigree as imposing as his hulking frame, Northern Ireland internationals Michael O'Connor and Shay McCartan, the former premier league defender Jason Shackell, flying wingback Harry Toffolo and National League player of the season Bruno Andrade. Scott Wharton, who many FM veterans will have seen rise to the Premiership, is on loan for the season from Blackburn.

Let's not stop there: they all add to last year's marquee signings Lee Frecklington, a Lincoln lad who has captained Rotherham in the Championship, and the bearded beast that is Michael Bostwick, perhaps one of the finest centre backs in the lower divisions. Should I mention Tom Pett? The heartbeat of the midfield, signed from Stevenage in January.

Neil Eardley, the Imps' player of the year last season and former Welsh international, adds further quality to their defence and the winger Harry Anderson could literally give Usain Bolt a run for his money. And never discount Matt Rhead, a 6ft 7in, 17-stone monster of a forward who wins every ball you care to launch at him.

How about finances? Seven thousand season ticket holders and crazy gate receipts give you an idea of a solid lower league income. The FA Cup run wiped out their debts (thanks Arsenal, shame about the result), and the Checkatrade victory bought them a brand spanking £1m training ground. There should still be money in the bank, even after splashing a reputed £150,000 on Akinde.

They've also got the coolest away kit in the league, the best nickname, and a badge to match.

So to recap - a quality team on the up, with cash to spend, a story to kill for and a fantastic squad tipped to be a major force in League Two this season. Lincoln City want Championship football in the next few years. Are they overachieving or can you ride the Lincoln loco to its deserved destination?

Discussion: Lower League Challenge: Can you ride the Lincoln loco?