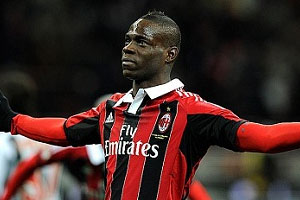 Mario Balotelli is now a name that is known to most football fans around the world. The AC Milan and Italy striker, formerly of Manchester City and AC’s city rivals Internazionale is known to not only be a player with fantastic potential to become one of the best players in the game, but also as a player famous for his crazy antics and indiscipline on the pitch.

Balotelli rose to fame at the San Siro with Internazionale, one of Italy’s biggest sides. He joined the 3-times European Cup/Champions League winners, and 18-times Serie A champions in 2006, from Lumezzane, who play in the Lega Pro Prima Divisione, who started to play Mario when he was just 15. The club actually got clearance from the league to play him at this level at that age because he was just too good for the youth levels, and had to be accelerated to the senior side to aid his development. He only made two appearances for Lume before being snapped up by Inter at just 16. In the next four years, he went on to make 86 appearances for the Nerzzuri, scoring 28 goals by age 20. A very impressive tally at that age, especially with some of the quality strikers that Inter possessed at the time. Remember, Inter were one of the very best teams in the world at the time, although they have declined in the last couple of years.

Mario Balotelli left Inter in 2010, after winning the UEFA Champions League in Madrid, at the Santiago Bernabeu, with Diego Milito netting a double in a 2-0 win for Inter. Balotelli was an unused substitute in that game, however with the front line for Inter consisting of Goran Pandev, Samuel Eto’o and Diego Milito, that is hardly surprising. That summer, however, marked Balotelli’s exit from the San Siro, as he left to join Manchester City in a deal of around £18m, where he would play under Italian Roberto Mancini, who had been the manager of Inter Milan when Balotelli joined the club.
Manchester City had narrowly missed out on Champions League football in the previous season, with a loss at home to Spurs late on in the season denying them the chance to play in Europe’s premier competition in 2010-11. City responded by proceeding to buy several big players that summer alongside Balotelli to try to improve the side. Barcelona’s Yaya Toure, Valencia’s David Silva, and Aleksandar Kolarov of Lazio joining the club alongside others as City mounted a successful challenge for Champions League qualification, finishing 3rd.

After scoring 10 goals in 28 games in all competitions in 2010-11, 2011-12 was the season Balotelli really stepped up for the Blues. Thanks to the self-imposed exile of Carlos Tevez and the inconsistency of Edin Dzeko throughout the season, Mario was regularly given the chance to play upfront alongside Argentine Sergio Aguero, who was the club’s record signing from Atletico Madrid in the summer of 2011 as City looked to challenge for the league title. He formed an effective partnership from Aguero, scoring 13 league goals himself, as well as helping Aguero score 23 in the league, including setting up a dramatic late winner at home to QPR in the final game for Aguero to fire home and win City their first league title since 1968. No-one could argue that Mario hadn’t had an effective season, apart from when he nearly cost City the title by being sent off in a loss at Arsenal seven games from the end of the season. Thankfully, it didn’t cost City their title, and Mario remained a legend to many in Manchester. Not necessarily for his actions on the pitch, more for the ones on it.

That was always the lingering problem with Balotelli in his time in Manchester: his attitude. We could see he enjoyed the football and liked playing for the club, but off the pitch he didn’t seem happy to me, and this was reflected in his antics. The list goes on and on about what he’s supposed to have done. A large proportion of this will have been made up by newspapers to make him sound more interesting, to make them more money, but there is no denying he was involved in a lot of antics in his time in Manchester. I could mention the things he’s supposed to have done, but I’d be here all day, and the article would stretch over 3000 words.

I think for Balotelli to continue to develop as a player, and reach his huge potential, it was important for him to move back to Italy, the place he knows. He wasn’t really settled here, and had a reputation as a joker, not a player. It started to take his toll on Mario, who fell from glory, managing just one goal in the first half of the 2012-13 season. He wasn’t happy anymore, and the City fans weren’t happy with his performances. So, when AC Milan came in for Balotelli, to take him back to Italy in the January transfer window, after two and a half years in England for around £20m, both City and Mario leapt at the opportunity. Both parties were sad to see him leave, but it was necessary. He would never have fulfilled his potential whilst still at the Etihad.
So, after Balotelli left, he could be classed as damaged goods really. He needed to recover his reputation as a young starlet with huge reputation instead of a clown. Surrounded by very good players at Milan, such as Stephan El Shaarawy, and Kevin-Prince Boateng, it was going to be much easier than at a smaller club, like Palermo. In his first game, Balotelli netted twice, including an injury time penalty winner, against Udinese at the San Siro. After this, Balotelli went on to score another 10 goals in 12 league games, which is a very impressive return for any professional. In my opinion, Balotelli has already started to convince people that he really is the fantastic player that people thought he was going to be, and not the clown that many thought he was.
I’m writing this at the end of Balotelli’s first half a season back in Milan. It might be too early to draw any conclusions on how his career will turn out now, but if I was going to make a guess, I think it will turn out very well, and he will be a very important player for Milan over the next few years as they look to start to challenge Juventus for the title once again.

I also think Balotelli will thrive in Milan’s young side. They have some very good young players, with very good potential to boot. I already mentioned El Shaarawy earlier in this piece, and they also have players like young France striker Mbaye Niang and Italian defender Mattia De Sciglio. Once all these players develop to their full potential with i Rossonneri, they will have a side that is very difficult to beat, and Balotelli will be a big part of this.

I am glad to see that Balotelli’s career is recovering, as he deserves it, being the player with the potential that he has, but I am upset that he’s fulfilling this potential with Milan, and not my team. He would have turned into a very good player for us if we had nurtured him right, but there must have been some lingering problems that meant he would not succeed in England. These problems may have been with the manager, Roberto Mancini. It is rumoured that Mancini was unpopular with many of the staff and players at City, which may have been one of the reasons they failed to win a trophy in 2012-13. If he managed to upset a lot of the other staff at City, there is no reason he didn’t upset Balotelli as well, and this cost the club a very good, young talent.

There is always a lot of uncertainty around Balotelli. Whether he was happy at City or not. Which of his antics he actually did, and which he didn’t. None of this I will be able to answer. However, there is one thing I can say. Mario Balotelli is a player reborn.