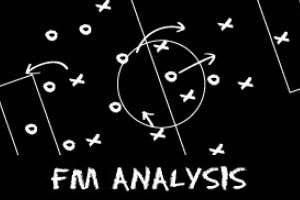 Football is a game of transitions, success or failure can often be attributed to whether your side was able to capitalize on mistakes made when your opponent surrenders possession unexpectedly. Creating a tactical system in which you give yourself the best chance of taking advantage of such mistakes is key to doing well in Football Manager 13. What though is a transition? A transition occurs when the ball passes from your oppositions control to yours, or of course vice versa. A lot of the time the AI is at its most vulnerable when they have just lost possession as in the attacking phase they have players moving forwards whom can take time to readjust to a more defensive mindset, this is the simple truth that led to the genesis of the high pressing style of Barcelona et al, indeed managing transitions an extremely important part of the tactical framework put together by Pep Guardiola.
That however is not to say that transitions are only key to tika taka possession football indeed the way that you manage transitions plays an integral part in deciding whether you play a short passing possession orientated style or whether you adopt a more direct approach. In this article I'll give examples of both slow and quick transitions, both of which occur largely within the same system but with a couple of small tweaks.

As I alluded to above the AI will be almost at its most vulnerable as soon as they lose possession. If you are able to cycle the ball quickly from the point that you win the ball to an area of space then you will quickly find yourself in an attacking overload situation with a route to goal.
I find that one of the keys to effective transitions is to use one, or even two, players as pivots within your side. These players are the ones that will make the decision whether to retain possession and rest or whether to go quickly for the jugular. In my current tactic I am using two players in different positions in this way, Holger Badstuber in defense and Bastian Schweinsteiger in midfield.
The key to deciding which form of transition will be more prevalent lies in the touchline shouts that I use. If I feel that the AI are pressing forwards looking to attack and open up the field then I will always tell my players to drop deeper, hassle opponents and get the ball forward. The aim is to draw the AI out to create spaces in their defensive schemes. How does it work though? 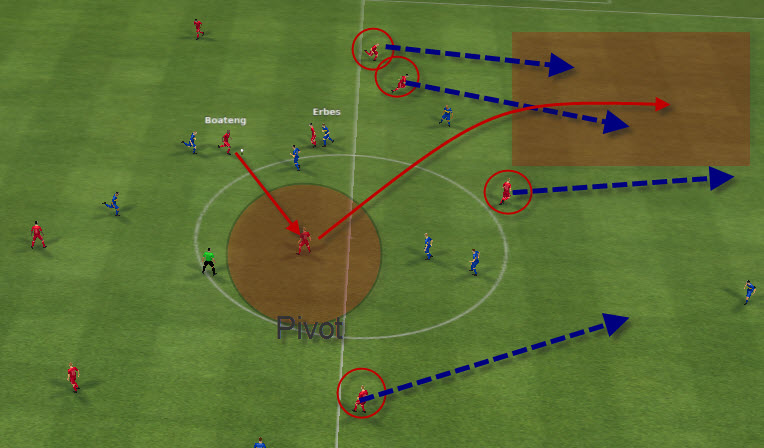 In the above screenshot we have won the ball just inside our own half through Jerome Boateng. Instead of taking the responsibility on himself to start the attack Boateng is tactically disciplined enough to feed Schweinstieger in space in the center of the field. He is then as the pivot able to immediately identify the area in which we have the greatest superiority in numbers and drop the ball in to space for out on rushing attackers. 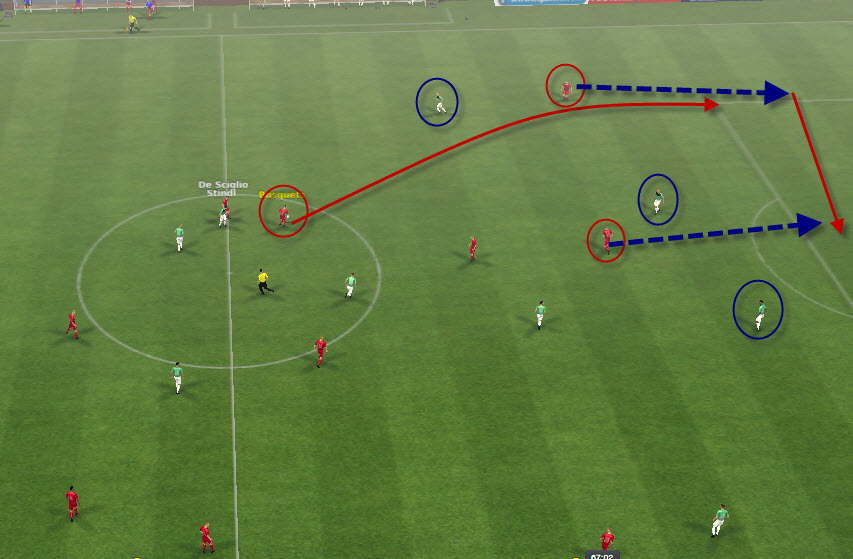 Above our left back (De Sciglio) has actually effected the change in possession by winning a header and finding Sergio Busquets in space in the midfield. On this occasion the pivot is neither used nor needed as Busquets has the intelligence to immediately play the ball in to space along our left flank where our winger is able to collect the ball and square the ball for an easy goal-scoring opportunity. As you can clearly see the AI right back was concentrating on supporting the long ball along his side of the field and he all but abdicated any defensive duties. 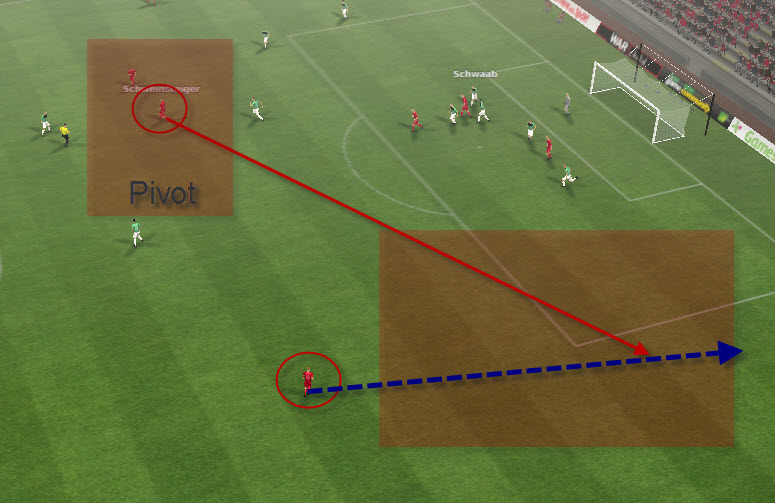 This time we have the AI pinned back in their own area as Schweinsteiger is the player that takes possession away from the AI and instead of lifting a pass in to the box that is at best 50/50 he is able to identify the area in which we have space to exploit and find the man in space on the right hand side.

With slow transitions the configuration of shout that I use are slightly different. I'll instruct my defensive line to push up, in order to shrink the pitch and give my players plenty of passing options. I'll look to retain possession to ensure that we are not trying to force the ball through the AI too much. The trigger for my decision to adapt this strategy is that the AI are sitting deep trying to deny me space and not looking to get forward in numbers. Once again though a picture is really worth a thousand words. 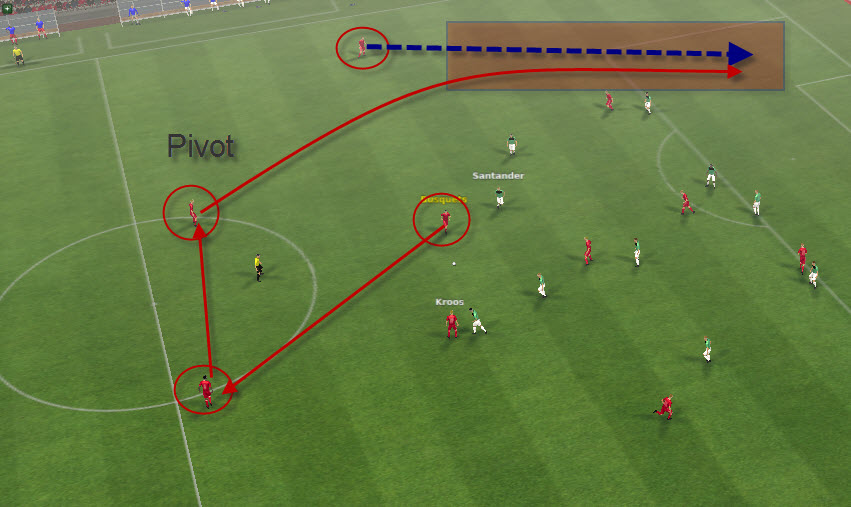 Here for the first time you can see my deeper defensive pivot in action. As Busquets pounces upon a loose ball in midfield he doesn't look forward for the primary pass. Instead he moves the ball back to our free defender, Dante. The Brazilian immediately cycles the ball sideways to our more offensive minded defensive pivot. Badstuber is then free to make the choice to play the direct pass. The direct pass is the key to the entire move. Possession football as an end in itself is all but useless in truth and people have tended to overlook that even Barcelona at their best use the direct sharp pass to the third man run as a means to break down stubborn opposition defending. The combination of short passes to draw the AI out followed by a direct pass in to space is extremely difficult to defend against. 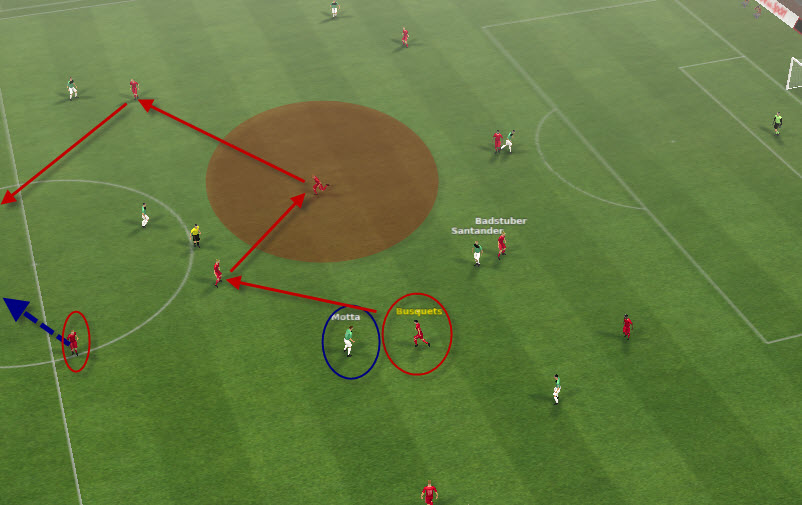 Here we can clearly see two occasions when there is an opportunity to play the direct pass. Instead we retain possession following the turnover and after moving the ball and pulling the AI out we are able to connect with our striker on the long pass. Sergio Busquets again is the catalyst as he wins possession and feeds Kroos centrally he then feeds the ball in to the feet of our midfield pivot and again the chance of the long pass is ignored as it is quickly moved to the right before finally being played through to the striker deep. 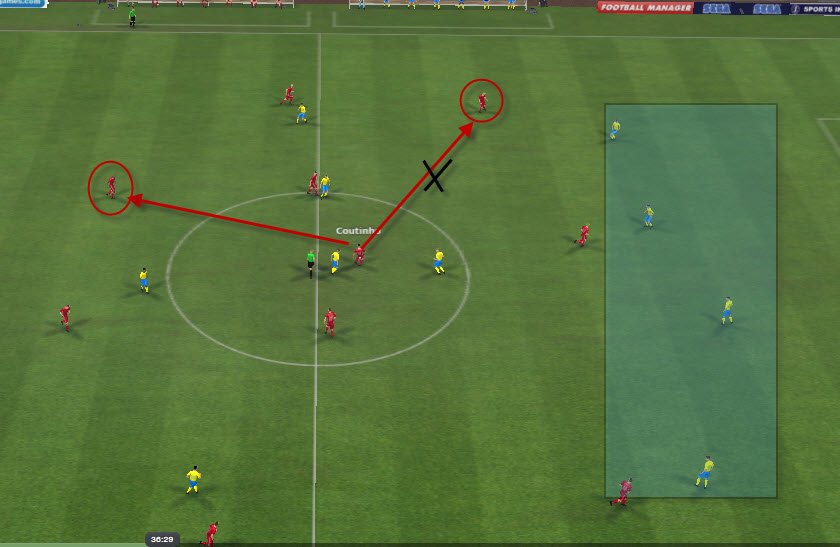 Finally we can see that the ball is turned over in midfield and Coutinho takes possession of the ball. His immediate attacking instinct would normally mean that he would play the ball out to the left flank. As you can see though the AI has retained an excellent defensive shape and this would not perhaps be the most sensible pass. Instead Coutinho cycles the ball back to the defensive pivot who is also the free man in defense.

So, there you have it. The importance of transitions within FM. For me this is without a doubt the key to breaking down various defensive schemes. Having the confidence to identify the trigger in the AI game-plan and change your strategy to counter will lead to a better tactical understanding of the game. As always, thanks for reading.