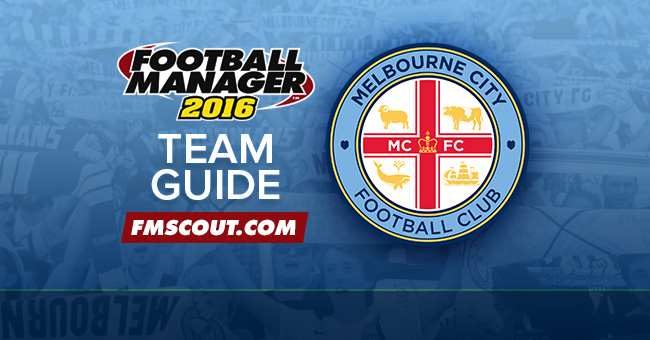 Welcome to Melbourne City!
Are you sick of playing the same boring leagues with the big European clubs? Why not try your hand at the Hyundai A-League in Australia? It has emerging talent, big name past players, and a genuine claim to being the most even league anywhere within the Football Manager database. 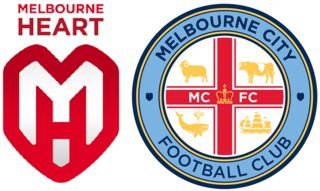 Melbourne City is a club that has undergone tremendous change in its brief history, after initially entering the Hyundai A-League in the 2010-2011 season as Melbourne Heart. The Heart were the first expansion team to enter a city that already had a team, and creating the first cross town rivalry in the short history of the A-League.

As Sir Alex Ferguson famously suggested about Liverpool when he first took over at Manchester United, the biggest obstacle for the new club was to knock the already established Melbourne Victory ‘off their perch’ as the largest club within Australia, and wrest control and support in the Victorian capital of Melbourne away from the foundation A-League side. As Melbourne Victory had been a foundation club within the league, and had a five year head start in the market, this proved to be a daunting task both on and off the field. Initial struggles to turn a profit, and only one appearance in the Hyundai A-League Finals Series in the first four seasons as a club, the project appeared to be stalling.

In January 2014, it was announced that Melbourne Heart had been purchased by the City Football Group, the same consortium that owned Manchester City and the new MLS expansion side New York City FC. This new ownership group announced massive changes to the club itself, which would now be rebranded as Melbourne City FC, and adopt a new white kit with a navy and sky blue stripe as a tribute to the parent and brother clubs in Manchester and New York.

Interestingly, the Hyundai A-League operates as a league with a salary cap. Similar to the MLS, this is a league enforced wage budget that dictates how much clubs can spend on player contracts throughout the season. Outside of this cap, each A-League side can have two Marquee players, as well as three Under-23 Junior Marquees whose contracts are outside of this salary cap. This allows clubs to offer higher wages than normal to attract larger international stars to the club. Prominent Marquee players to have played in the A-League include Dwight Yorke, Alessandro Del Piero, Marc Janko, Harry Kewell and Emile Heskey.

In addition to this, each team is only allowed to have five-registered foreign players. These league rules make the decision for City to invest in the club interesting, as they can only really flex their considerable financial muscle on two Marquee contracts each season. However, significant investment has been made in club facilities with a view to strengthening the development of Australian players. The City Football Academy opened in early 2015 at a cost of AU$15 million, a state of the art training city and academy for the Melbourne City A-League, Youth League and Women’s teams.

Considering the strength of the playing group and the significant investment made by the ownership group off the field, the board expectations at Melbourne City are not negotiable, and as manager you are expected to compete for the title.

When Melbourne City was first founded, the foundation manager was ex Ajax and Dutch National Team Player John Van’t Schip. As such, the team has always held a distinctive Dutch influence, both in playing personnel that have included ex-Eredivisie players such as Orlando Engelaar, Gerald Sibon and Rutger Worm, and in the use of the 4-3-3 formation. The majority of the competitive fixtures the side have played since their formation have been extensions of the 4-3-3 and as such it makes sense to continue the use of this formation with the squad. As such I have attached an attacking 4-3-3, with an emphasis on the use of width, to make use of the strength of the wingers and fullbacks in the formation.

As noted earlier in this guide, each A-League club receives two Marquee contracts for the season in the A-League. At present these marquee players are Aaron Mooy and Robbie Koren. 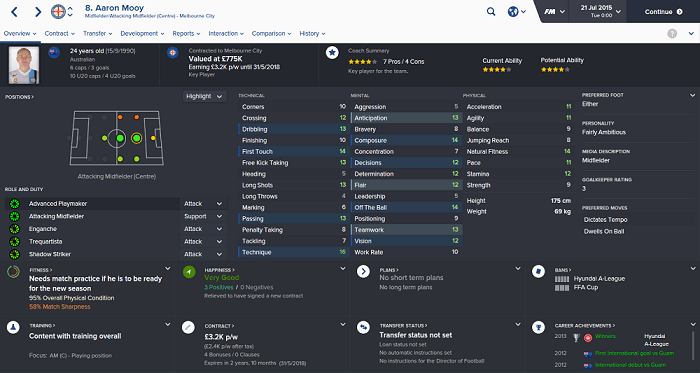 Aaron Mooy is perhaps the most in-form Australian anywhere in the world right now. This season he has been critical to the success of the Melbourne City and he has largely dragged the team to their league position in the last two years. 4 goals and 6 assists, and leading the league in chance creation, he is more than worthy of a Marquee spot in any team. However, in the game, his stats have not necessarily reflected his real-life play. Maybe worth keeping until the January Database update, at which point he will certainly gain a statistical boost but in his present form not entirely worthy of the 3-year Marquee deal he currently has in-game. 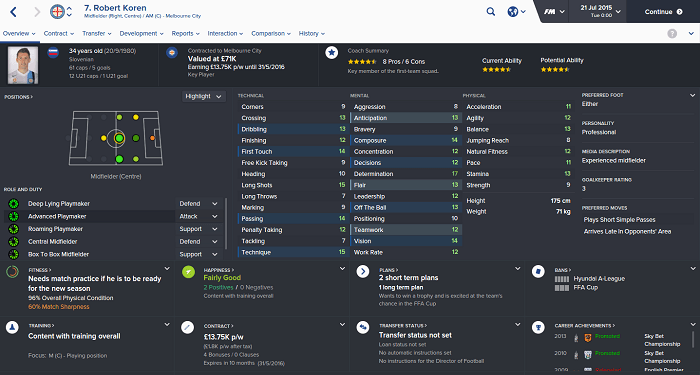 Robbie Koren has perhaps been the unluckiest Marquee in the short history of the A-League. An established midfielder in the English Premier League, he has captained both Hull City and West Brom in those leagues. His late career move to the A-League has been largely a disappointment, with injuries, the emergence of talented and more mobile midfielders in Mooy, Mauk and Melling, and his own complaints about his role in the team highlighting a short spell. A hattrick away to Newcastle last year so far the only on field highlight, his injuries co-inciding with the sides best run of form heading into the finals, it will be up to you to find a suited role to get the most out of the clubs highest earner. At 34, he is unlikely worthy of an extension to his Marquee contract.

Goalkeepers – Thomas Sorenson and Tando Velaphi
Two goalkeepers in such a small squad is absolutely fine. Further depth and emergency players can come from the youth team. In Thomas Sorensen, there is a player with over 100 caps for Denmark and in top tier football with the likes of Sunderland, Aston Villa and Stoke. Possibly the most experienced goalkeeper in the history of the A-League. His understudy, Tando Velaphi has years of experience within the league, at 27 unlikely to improve, but more than capable of acting as a first choice ‘keeper in the league.

Fullbacks – Ivan Franjic, Michael Zullo, Jack Clisby and Paulo Retre
In Ivan Franjic and Michael Zullo, Melbourne city have two Australian International fullbacks returning from largely unhappy spells in Europe. Both have the ability to become starting full-backs for the national team if they return to form and more importantly fitness. Behind them, Jack Clisby and Paulo Retre will continue their development and look to take their chances when injuries and international call-ups occur.

Central Defenders – Aaron Hughes, Patrick Kisnorbo and Connor Chapman
Melbourne City mixture of youth and tremendous experience at the centre back position. Aaron Hughes has represented Northern Ireland 96 times and is still a aprt of the squad that most recently qualified for Euro 2016. Hometown hero Patrick Kisnorbo has captained sides in the U.K. at clubs like Hearts, Leeds and Leicester. Both have tremendous experience and will likely vie for a starting spot alongside one of Australia’s most promising young defenders in Connor Chapman. Given the age of both Hughes and Kisnorbo, pace could be an issue at central defence. Versatile fullback Jack Clisby can also slot in at central defence.

Central Midfield – Aaron Mooy, Eric Paartaalu, Robbie Koren, Jason Trifiro, James Brown, Jacob Melling and Stefan Mauk
Melbourne City is blessed with a surfeit of Central Midfielders. Perhaps too many. Definitely too many. Aaron Mooy and Robbie Koren are the two Marquee players for Melbourne City and have been discussed as our Marquee men, but both would be among the first names on the team sheet. Erik Paartalu is a gifted defensive midfielder, as a 3-time A-League champion with Brisbane Roar, he more than capable of plying his trade in Europe after stints in Scotland earlier in his career. Youth Internationals Jacob Melling and Stefan Mauk both have the potential to surpass Mooy and Koren if given the game time develop. Jason Trifiro and James Brown are two of the poorest players in the club and as such, should be kept in a glass box that you only break in the most dire of emergencies.

Wingers - Harry Novillo, David Williams, Ben Garruccio, Steve Kuzmanovski and Wade Dekker
Perhaps the area with the most potential to strengthen is out wide. Ex-Lyon youth product Harry Novillo has all the technique and trickery to play well out wide, though he will need to be trained to play on the left wing, where he is more comfortable cutting back in. David Williams offers great pace out wide but his technical stats are poor. A higher quality right winger would be a decent pick-up. Youth Internationals Ben Garrucio Wade Dekker and Steven Kuzmanovski provide the back-up for these positions with Garrucio in particular ready for the step up to first-team football.

Strikers – Bruno Fornaroli, Corey Gameiro and Marc Marino.
Bruno Fornaroli was a large unknown coming into the A-League season, but since debut the Uruguayan forward has demonstrated the clinical finishing City have lacked since their inception. 7 goals in 9 league games at the time of writing is an impressive return from a player new to the league. Corey Gameiro will look to fulfill his potential after returning from ACL surgery in the previous season, but if he stays fit, his pace will be an asset. Youth international Marc Marino rounds out the squad and at 17, he has the largest room for development of any player in the first team squad. 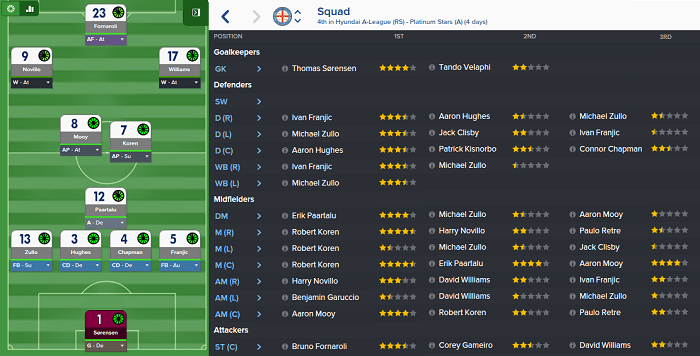 Given the first-class facilities, the salary cap, the ability to sign a big marquee player to try and attract more fans, and an established cross-town rival, Melbourne City can be one of the most entertaining saves in any football Manager Database around the world. Give it a try, you likely won't be disappointed!