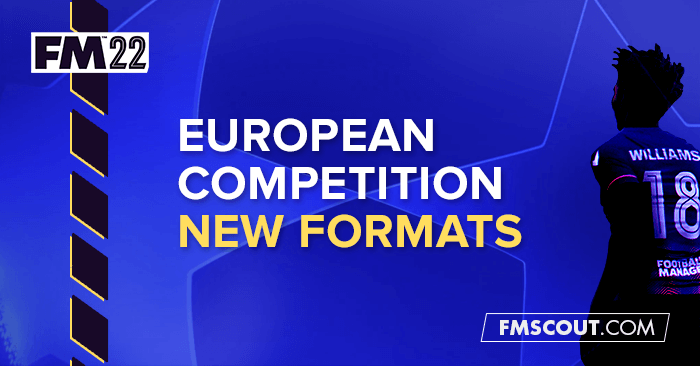 Sports Interactive’s commitment to realism means that there are thousands upon thousands of changes both visible and not-so-visible to each yearly edition of the Football Manager franchise. Some changes include the laws of the game, substitution rules, work permit regulations and changes to real-life governmental restrictions and policies. Those are all very crucial changes which make the simulation as accurate as possible.

Some changes are a lot more drastic like what UEFA have officially announced back in May 2021; the dramatic change in format to the European football competition structure starting for the 2024/2025 season. This was lost in the news cycle thanks to the announcement of the European Super League and it did not come under heavy scrutiny – bar a few comments.

Thanks to SI’s realism, this can potentially impact us as we play FM22 for several in-game seasons. Not to worry about being blind-sided, here we will explain the format changes that you may see actually happen in your save.


HOW DOES IT WORK?


WHAT ABOUT THE TEAMS THAT FINISH FROM 25TH TO 36TH?


WHAT ABOUT THE EUROPA LEAGUE AND EUROPA CONFERENCE LEAGUE?


ARE THERE THINGS THAT NEEDED TO BE SORTED OUT?

Yes, there is. More information is going to be released near the end of 2021 and onwards. This is already a very controversial move, especially what has happened with the European Super League as this essentially creates one – especially the AUTOMATIC SLOTS for teams who FAILED TO QUALIFY. Several have already complained against the new format as the 4 new League matches and the Play-Off add more matches to an already congested calendar.

There are other controversial moves as well. It is rumored that the Semi-Finals will be over one leg rather then two and on a neutral venue.
More decision making is needing to be made – as UEFA themselves put it; “Further decisions regarding matters such as the rebalancing of the access list, match dates, seeding system, format for the finals, coefficients and financial distribution will be made by the end of 2021. Potential adjustments to the format approved on 19th April could still be made if necessary.” UEFA are looking to take more control back from the clubs and are most likely going to be removing the automatic slots – that has yet to be determined however.

WHAT DOES THIS MEAN FOR FM22?

We still don’t know. SI are well ahead of the game as usual and are aware of these format changes. However, the issue remains is will we see this format change at the release of FM22? In all honesty we do not know, that is up to Miles and the whole team working on FM.

What could go for it is that UEFA are saying this IS happening. The ECA and UEFA Club Competitions Committee unanimously backed this format change. Unless we see complaints like with the Super League occur or a player’s strike – it is extremely unlikely UEFA will back off these format changes, especially as there is a desire to increase UEFA revenue’s and give more distribution. Now since this is happening, Sports Interactive will take note and have a chance of putting it in the release of FM22, modifying it as more announcements are made from now to release.

What could go against SI putting this in FM22? The announcement timeframe. All we know is that more announcements will be made at “the end of 2021”. FM22 could be released by then. SI could hold back the change in format until FM23. Another point to make is that there are still too many factors which are unknown for the new competition formats – we don’t even know how many teams will be in the Europa and Conference League. Coefficients, financial distribution and so many other things need to be sorted out. That is a lot of grey-area left open for SI to try and fill in the blanks for, so safe bet is that they may just wait until FM23 to get it right.

There’s another point to consider. There are most likely changes to the format and more rule changes coming off the basis of this new competition format. UEFA are already pushing forward wage restrictions and a revised more conclusive FFP which will target big clubs with debt. UEFA are also wrestling back power from the clubs and will most likely be making changes to the format regarding the qualification structure and ridding of the automatic slots according to some speculative reports. Another issue is that several governments including the UK are making mandated rule changes giving more power to overseeing bodies such as FA’s, League’s and to UEFA which then affects FIFA. This will take time and is set to be announced over the coming several months.

With the European court battles coming from the Super League clubs still going on and the debacle of said Super League – it is unknown how these new formats will be perceived or what will change as more information is released.
Who knows if this will be seen in FM22.


LET’S SAY IT DOES HAPPEN – HOW DOES THIS AFFECT ME?

A simple short answer is that there’s more European slots available for clubs, meaning that especially outside the top 4 leagues – you have a higher chance of potentially qualifying or getting a chance to qualify for the Champions League. This can also follow suit to the other competitions.

There are now far more games which means far more income. In fact, the Champions League increases from 125 to 225 matches – this is also the same for the other leagues which means a far more increased revenue for participating clubs. These changes also mean that you have an automatic greater share in the money as you go from 6 matches to a minimum of 10.

This format increases competition and the meaning of games in the later stages of qualifying for the next round. Even though you can counter-argue this claim by UEFA – the idea is that qualifying for the next round should go down to the wire and you should not be able to qualify “comfortably” for the knockout stages. A continuous point to add is that out of the existing 32 teams in the competition – you need to be in the top 16 to continue in the competition – now you have a chance if you’re in the top 24, meaning you stay in a competition with higher revenues for longer and a longer chance to compete if you get off to a slow start.

Even though this point goes against the very core value and fabric of football – the two slots available for historical performances means that if you fail to qualify automatically, you have a shot of being let in if your coefficient rating is high enough. This of course is one of the most controversial changes to this format and will most likely be re-voted upon by the ECA and pointed out by fans as the one change that must go. UEFA have covered themselves in this regard by making the point that there can be changes to this new format and are seemingly going to change this soon according to reports.

One change to possibly lookout for in your save would be a change in the calendar. With replays in cup competitions, different league calendars and the international calendar - formats could be adjusted to ease the burden of these matches as more clubs get involved in Europe. You may be affected by this or see a change from the 2023/2024 season to the 2024/2025 season where these changes take effect.

For now, this is speculation if this competition will be within FM22 – but what we do know is that changes are happening and that there will be new formats from 2024/2025 season onwards. As more announcements get made from now till the release of FM22, we will update accordingly.