Search
On FM Scout you can chat about Football Manager in real time since 2011. Here are 10 reasons to join!
Home › Articles › Advice ↓ 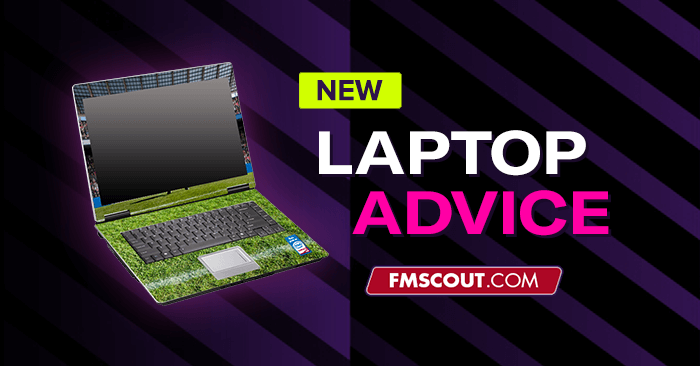 Before we get into the fine details of our laptop buying guide, I would like thank Kevhamster, Smurf and Pradyoth for allowing me to use excerpts from their own text. The first two in particular have a long super helpful thread on SI forums where they are helping those in need of new laptop advice.

Laptop choice comes down to your budget. You need to get the best laptop you can afford, so cost-effective is naturally the most important factor.

While most of the tips provided in this guide is universal laptop buying advice, some are specific to Football Manager. So take special note of those.

Now I can imagine the most common question would be something like this; "How many leagues / divisions / players in the database could I run with this laptop and how fast the game will progress?"

Thanks to an initiative by Brother Ben called Performance Benchmarking, we do have a reference point to knowing what config would give us what kind of performance.

If you examine the benchmarking results carefully, what you'll realize is that even the best configs will struggle with all leagues loaded, and a large database.

So make sure to check the dedicated article on that.

A search engine is your best friend in research

We won’t be making specific laptop model suggestions because the available options change too often, and then there are region specific variations.

We’ll give you actionable tips instead. Solid advice you can use whenever you need to make a choice for a new laptop that is primarily aimed at playing Football Manager as smoothly as possible.

Generally speaking, the lower your budget the more likely it is that you will need to lower your expectations on how many leagues / divisions and database size you will have. And the lower the detail level for 3D matches.

But here's another interesting fact; the most expensive computer is not always the best for Football Manager!

Beware of high prices. Some computers designed for portability are more expensive.

Beware of going to the most expensive first, because different computers are built for different needs (like portability).

While small laptops and convertible tablets are a popular choice in general, when it comes to Football Manager, you’ll have a hard time enjoying the game to the fullest on smaller screen resolutions, especially if you’re a fan of custom skins.

Besides, the larger the screen, the more widgets and data you’ll be able to see.

However, if you prefer FM Touch over the regular FM, then a small or convertible 2 in 1 laptop could be a good choice because in most cases they are also cheaper than owning a separate laptop and tablet, making them a more economical option.

So in that regard, a 2-in-1 laptop is worth looking into.

FM minimum system requirements and then some

There’s a good reason each PC game comes with system requirements. You need to ensure your computer is powerful enough to run it, and these specs are the minimum to do just that.

That doesn’t mean the game will run as smoothly as you might be hoping for if your computer can merely pass the minimum requirements. So we will focus on key specs we believe to be the most important ones for a great game experience.

Central Processing Unit (CPU) better known as the processor. This is effectively the brain of your PC.

The better the CPU, the smoother FM will run. It may also allow you to load more leagues / divisions and a larger database size.

While it is best to look at CPU's which meet and even better exceed the minimum stated speed requirement, it's not necessary to go after the fastest clock speed. There are other factors in the processor that can be considered.

Bonus tip by Daveincid:
Another detail to keep in mind is temperature under full load because Football Manager is very CPU-heavy.

If a CPU gets too hot and there isn't enough cooling (a problem with laptops in general), it will clock down and you'll lose a lot of performance.

Intel and AMD doesn't matter so much with the newest generations of processors, even though some might argue that AMD is more energy-efficient (less energy needed = lower temps).

The Graphics Card. This is what allows the computer to display graphics.

There are two options when it comes to types of graphics card; Integrated and Dedicated.

Integrated is where the graphics processing capability is built into the CPU and is the less capable option.

FM will still happily run with integrated graphics, however, if playing using the 3D match engine, you may need to lower the settings for it to run at a smooth frame rate.

Some processors though do have really good integrated graphics and may be able to run the 3D match engine at higher settings.

Dedicated is where a computer has a dedicated graphics card entirely separate from the CPU.

This will generally be needed for playing 3D matches at the highest settings, or if playing other games.

RAM allows multiple tasks (programs) to run at once.

The more RAM you have the more smoothly the computer operates when you have multiple programs open, like playing FM, watching Netflix, editing music / videos, etc.

Football Manager will also utilise the RAM and having more RAM allows some parts of FM to transit faster.

Some will argue that RAM speed might be irrelevant to FM performance, but recent tests show otherwise. Daveincid has run such tests and can confirm.

For reference: 8GB RAM is plenty for most people. 16GB RAM is better (and recommended) but not necessarily essential. 32GB RAM would only really be needed for heavy duty movie editing / animation etc.


What is the most important thing for a FM laptop?

The most important thing for a FM laptop is CPU clock speed and RAM speed (assuming sufficient RAM size).

Go as high on the CPU clock speed as possible within your budget. And DO NOT buy underclocked laptops.

How to identify underclocked laptops?

Most of them have a "U" at the end of their name.

Don't let the price fool you, because €1000 has a flurry of underclocked, thin business laptops.

In underclocked processors, don't be deceived by the max clock speed; they won't ever touch the max unless you fiddle with advanced settings.

Which processors are the best?

Does it matter if I can't afford an SSD?

There are mainly 3 types; HDD - Mechanical drive (cheaper), SHD - a combination of HDD and SSD drives (in-between price), SSD - Flash-based device that is faster and quieter (a bit more expensive).

An SSD has little benefits for FM apart from faster loading and saving times, but it will give a better overall computer performance.

If the computer only has 128GB/256GB hard drive space then you may need extra storage. Best to get larger storage at least 512GB, or get a computer with both SSD and HDD; in that case, make sure the operating system is installed on the SSD and your other programs are installed on your HDD.

So if you can save money by going for an HDD with more storage space, go for it. Still, I would personally avoid HDD because the overall computer performance gains are significant.