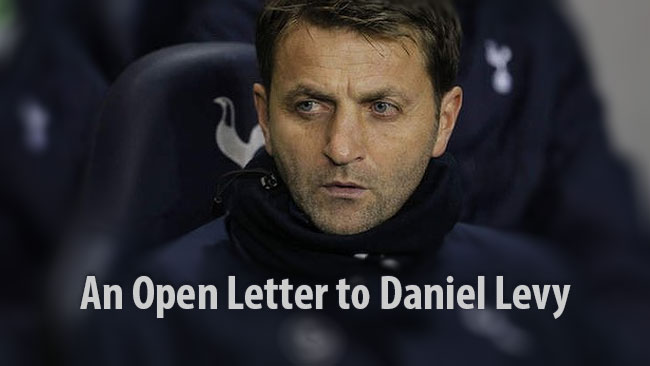 Re: Do not sack Tim Sherwood. He is the best manager you have ever had.

It seems you've done it again, and this time Daniel, it's a downright shambles. This, potentially, is the eighth permanent manager you've seen come and go since you took over as Chairman of Tottenham Hotspur in February 2001. Oh, sorry, you thought it was more? Yes, I decided not to include David Pleat who took the caretaker role three times, and the trusty Clive Allen/Alex Inglethorpe combo you placed in temporary charge twice. Forgive me for not aiding your clearly prideful record by adding supply teachers to our managerial merrigoround.

Please do note that I've placed the possessive determiner 'our' in bold lettering towards the end of the previous paragraph. Note this because Tottenham Hotspur Football Club may indeed have your name above the metaphorical portal – but it also belongs to thousands upon thousands of people who care about her more than you. Financially? Perhaps not. In our hearts? Yes.

A sense of great love, passion and affection overrides us supporters like the love of a newborn child – just ask Tim Sherwood. Go on, do it, he loves the club, he loves the job, and he's flaming good at it too.
He is, whatever stats you try and massage to disprove it, the best Premier League manager this football club has ever seen. A 59% victory statistic is all we need to look at – yet since he took the job on an 18 month contract, you've been doing your predictable unconfessed sneaking around. Let's have a look, shall we?

I'll tell you what, how about we stick with the guy who is in charge right now?


Why do you want rid of him? Is it because we play a style of football you don't like?

Ha! Obviously, with you being such a highly qualified UEFA Pro License football coach whom unfortunately only mustered a desk job with more power than sense – this is understandable.

Why do you want rid of him? Is it because we haven't finished in the top four?

Well, just watch his post-match interview with Sky Sports following the 4-0 drubbing at the hands of Chelsea. He tells you what deep down every true Spurs fan knows. We don't have the players to pull off that kind of league position. It's not realistic. 6th, where we finished? Aah, that's about right. You could have had Josep Guardiola, Jose Mourinho, Sir Alex Ferguson – all of them on the coaching staff – we'd have finished, and it's an absolute cast-iron certainty, outside the top four.

Oh, I know, you want rid of him because he's an undercover Arsenal fan? 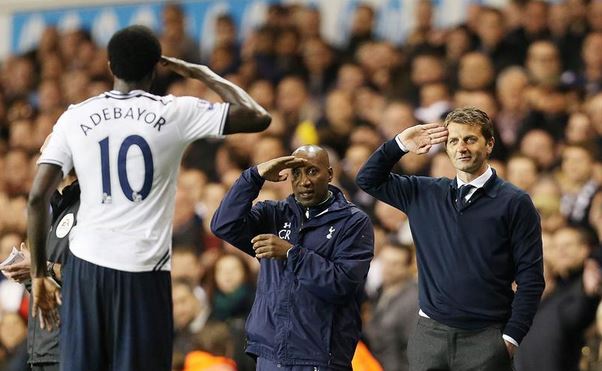 Does that look like a man who loves Gooners to you, Daniel?

Don't get me wrong, Mr Chairman. Spurs fans are eternally grateful for much that you have done. Never mind results on the pitch, we were the brunt of every financial joke going before you and ENIC saved us from the depths of despair in 2001. How could a club that had been relatively successful for three decades and had such a big fan base nearly go under? You couldn't write it.

So in fairness Mr Levy, compared to some of the boards we've had here at Spurs over the years, we're somewhat grateful to have yours in control. May I add that when I say “in control”, I mean it in the most flaccid sense conceivable. Moreover, whilst I appreciate you can't please all of the supporters all of the time, we do generally welcome your ambitious target setting both on and off the turf, with a place back in the UEFA Champions League a dream very much alive for us all. We all want to see great players playing in a great new stadium, lifting trophies and hosting the likes of Real Madrid, Bayern Munich and Juventus on a Tuesday night at what will potentially become our home - the Northumberland Development Project.

But key to these dreams are what we do on the football pitch, and the key to what we do on the football pitch lies in the hands of the manager who selects and trains the players every day of every week. And, whilst this may make you feel like an eight year old boy being told you're great at playing in the school sand-pit but you can't count for treacle – handling managers is probably your weakest link.

Let me just put this to you. See what you think.

Since you joined the club 13 years ago, you've had:

What did we win with all those big name European managers?

What about the English managers?

Over the last 17 years, our arch rivals Arsenal have had:

One manager? What can they have possibly achieved with one manager Mr Levy?

Mr Chairman, I beg you to see sense. Those statistics above – its all you need to know to make a decision on whether Tim Sherwood stays or goes. He has to stay.

In order to achieve your goals and the fans' dreams, Tottenham Hotspur Football Club needs stability, right from the top to the lady making cups of tea at the Lane. Let me put it like this, if you move your son from school to school every 9 months, he isn't going to pass his GCSEs is he?

Tim hasn't even had a transfer window to make adjustments and prepare for next season yet! If we're being really honest Mr Levy, yourself, AVB and Mr Baldini made a right balls-up of spending £100,000,000 on players to replace Gareth Bale, who was basically the difference between finishing 6th or 4th. Christian Eriksen is the only one I'd keep from what I've seen. Soldado is up there with the worst signings in Premier League history, I kid you not; I'm talking Gerald Cid to Bolton, Massimo Taibi to Man United, Marco Boogers to West Ham – that kind of harrowingly inadequate transfer.

So let Tim Sherwood see out his contract, give him the summer and until Christmas next year, you never know – he might even achieve yours and us, the supporters' goal of finishing fourth and knocking about with Europe's elite. He is just as likely to do so as any manager you approach for a job that is already taken by Tim. May I add, that your behaviour behind Sherwood's back is a disgusting way to treat your employee and it's only because he loves the club and the job he's doing that he manages to dignifiedly deal with your incessant disrespect and inflicted hardship.

Tottenham Hotspur is a club of, as you know, enormous potential. We are the kings of underachievment. I honestly think that if you have a strong knowledge of the game as I think I do – allowing the man who has the highest win percentage in our Premier League history to see out his contract is a no-brainer.

Tim Sherwood could win the league four times with Ajax like Frank de Boer, it's like Manchester City going playing in the Scottish Premiership, you're dead on certs to win the thing.

My opinion counts for nothing, I know, but we don't need a big name in charge to be successful. If Tim Sherwood wants to stay after the way you've treated him this season, you should be kissing his feet rather than leaking to the press that he's off at the end of the season when there are games left to be played – AND the fact the man himself hasn't been told. Vile.

I'll tell you this for free, Levy. Getting the right blend between a manager, the players and the club's expectations and tradition takes time. Lot's of it. Manchester United the prime example. This has been the case to an exponential degree this season – it will work.
Tim will shift the players who aren't playing for the badge and the fans, let him. Let the dead wood go, sign young, preferably British talent and have away with the unpropitious ideology that European names bring success. Longevity, hard work and spirit brings success.

So, Levy. Get off your high horse and let the best manager you've ever had run the club he loves and bring the glory days back to White Hart Lane.

Deep down, you know you want to.

Morale and Relationships in Football Manager