Have you ever been in that scenario where you have a sweet tactic that produces amazing results but the roles are quite unfamiliar to your current crop of players.

You don't have a Segundo Volante in your team? No problem. I'll show you an easy way to replicate Segundo Volante's role using a traditional defensive midfielder.

It's simple. You can do this for any role, not just the Segundo Volante. but we'll use the VOL as an example.

First, you read the role description for the VOL carefully. We see from the image below that the Segundo Volante has specific instructions like get further forward and drive run with the ball through the center.

Selecting a defensive midfielder on support duty will give you more freedom to include player instructions. You can add, "get further forward" and dribble more for the DM(su) to ask him to operate like a VOL. 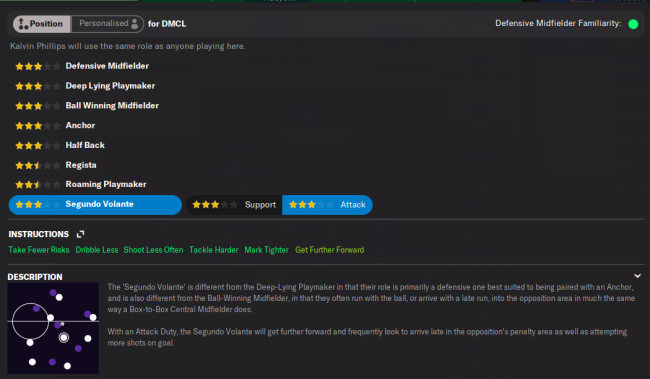 On attack duty, the VOL will try more shots at goal. so you can include the shoot more often instruction for your defensive midfielder to recreate this behavior.

The joy about this role swap lies in the fact that you can have your defensive midfielder play as a Segundo Volante on automatic duty i.e. transitioning between support and attack duties.

This method works quite well for lower league teams where not all the players have accomplished Segundo Volante(s).

You can also swap roles like Complete Wingbacks with Fullbacks, or Complete Forwards with Deep-Lying forwards. Just go over a role description, then find a flexible role like Fullback, central midfielder, and use those roles to swap.

Note: A role is more flexible when there are little or no forced instructions for them.