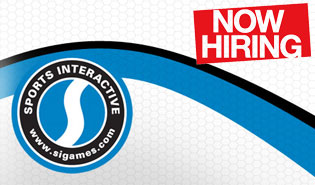 Miles Jacobson (SI boss) posted an announcement on the official Sports Interactive forums about new positions that opened up on their team, which is a result of their success over piracy during pre-release and post-release that lead to growth in sales.

This is a special opportunity for all people interested, considering that SI are rarely looking for additions to their team.

Here is the announcement:

"As you may have read in the press, due to FM not being cracked at all for the first 10 days of release (and 5 days before release) and the double digit growth in sales over that time period compared to last year (in a PC market that's more than 10% down year on year), we've got some extra budget to invest in the team. As a result, we're looking to sign up a few players to our squad at Sports Interactive to help all of the games that we're working on in what will be our 20th year of releasing games.

Essentially, we're looking for experienced, or incredibly talented & very hungry, programmers/coders/engineers (depending on which one you like to be called) to come and join the winning team here at SI. You can see what we're looking for in more detail at the bottom, but thought it might be worth giving a few words on what it's like at SI, and why you might want to transfer to us here.

For a start, we've had more weeks at no.1 than Madonna (we like bizarre stats here). And we're still at no.1 in the PC charts this week in the UK, which is nice. And that means you are likely to be paid for your work, without fear of redundancy. We're also market leaders, globally, in our field, both critically and commercially.

But that doesn't mean we're at all complacent about our position. We're as determined as we were all those years ago when we first started releasing games to keep improving all of our titles year on year. And that's one of the reasons that we're looking to hire, particularly people who specialise in the technology side of things as this will allow us to do more code sharing across our titles, whilst also improving the customers experience whilst playing our games.

We're also looking to be working on more platforms. Not consoles – we have no plans to go back to them at the moment and aren't looking at working on next gen consoles either currently, which we know is a problem for some people when they're building up their CV's – but we are looking to work on other types next generation platforms. Football Manager has been very successful but so is Football Manager Handheld, and there are all kinds of possibilities with future tablets and phones and we intend to be leading the way on those devices much in the same way as we have done with iOS and our PC & Mac games.

We also have Football Manager Online coming out in South Korea next year, and plans for other football management based titles too. And to make it all a smooth process, we want incredible talented, passionate, people coming to work with us to make it happen.

I mentioned earlier about CV building. To be frank, that's something we're not a good studio to be joining for if that's what you want. We have an incredibly low turnover of people here, and lots of the team have been here for more than a decade. That's not to say it's cliquey – it's not at all. We have a very relaxed attitude and, as long as people get the work done that they've said they're going to get done, we don't crunch. In fact, we've only ever had one period of enforced crunch at the studio in 20 years, and it's something we never plan to have again.

We're also a family focussed studio, being a family ourselves. Very good benefits – the normal ones like healthcare, good holiday scheme, generous profit based bonus scheme (and we do make a profit each year, so bonuses get paid each year), dental, insurance etc, but also childcare vouchers, flexible working hours (within reason!), regular social nights, and even a family day once a year where everyone in the studio can come along with partners and kids to get to all know each other.

It's very rare for us to be looking for experienced people to join the team here, and this is a great opportunity for anyone who wants stability, to be working on top quality games and something a little bit different. For example, we have no designers in the studio – we work on the feature ideas together, vote on them together, work on the schedules together and the programmer responsible for the feature is responsible for designing it (along guidelines, of course). Each project has a notional “director” who puts the feature set together for each iteration and will have constructive feedback to give back, but you aren't just given a list of things to do and told to do it in a way decided by a designer.

And yes, we are publisher owned, but there is little interference. We have full creative control across all of our titles and people who deal with SEGA on a day to day basis, so as a programmer you'd be working within your team and the production team at SI without anyone in marketing telling you to make the footballs in the game shaped like monkeys because they like monkeys.

We're based in central London, within a couple of tube stops from both Kings Cross, London Bridge, Liverpool Street & Euston, so are nice and easy to get to if you do live a bit outside the big smoke. And often have tickets for football matches going spare. It definitely helps settle in here if you do like football, but that's not an essential requirement.