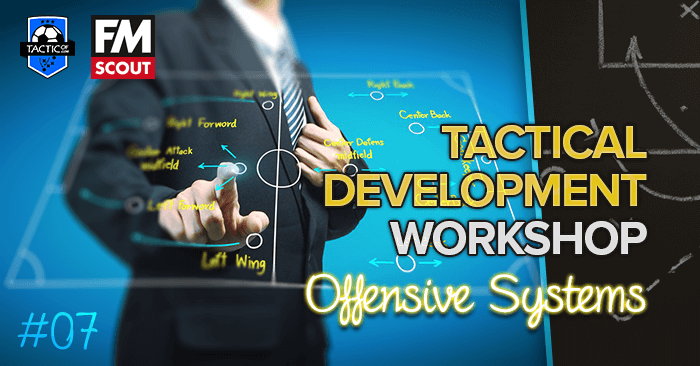 Welcome to the seventh lesson in Tactical Development Workshop.

You have to forget everything you have learned about defensive systems (4th Lesson) in Football Manager, but you have to remember very well everything about the rival manager (1st lesson).

Why? Well, because the choice of how your team should attack (the offensive system) depends ABOVE ALL on how your opponent will defend. Obvious? In reality - very much, in Football Manager - not necessarily.

Remember that when choosing a tactic for a match in Football Manager, we actually give a system of binary commands that our virtual players will obey politely, while in reality... we know what it looks like.


Digression.
The developers claim that the attribute responsible for the implementation of tactical commands is TEAMWORK (The Football Manager 2016 Encyclopedia says: "How closely a player follows his tactical commands and how much he is aware of the positions and movements of his teammates and cooperates with them.").

Is it true? I checked. The dependence does exist but the Pearson correlation coefficient at the levels from +0.17 to +0.32 indicates a very weak correlation (with outliers not exceeding 1%) and it definitely increases when the attribute is less than 7.

Interpreting these results it can be concluded that only players with a TEAMWORK level of 6 and less begin to perform tactical commands clearly worse than their colleagues with a higher level of this attribute, although it will still be a very weak relationship (the worst results in the study are in the range of 60 -90 failed attempts out of 1000).

If we add to the above information the fact that in the set I analysed, among 6.230 players worth over 100,000 EUR there were only 65 such players (and 24 of them BEING goalkeepers), we can definitely say that our virtual players will do whatever they are told.

So how do you know which way your opponent will defend? It turns out that in the majority of cases it results directly from how they will... ATTACK!

Yes. Yes. You read correctly. Defending in Football Manager AI is determined by the tactic choices made by the attributes of rival manager.

Trying to simplify this a little bit, it can be said that the choice of our team’s offensive system in FM should be decided taking into account the tactic of the next opponent.

The tactics of our rivals are largely determined by three characteristics of their manager:

Mention that the manager's mentality is not determined by the Coaching Attacking attribute shown in the game, but by the hidden attribute named simply: ATTACKING.

This attribute determines the starting attitude (mentality) of the team in clashes with rivals of a similar class (reputation + skills), because it will automatically be more or less offensive depending on the class of the opponent.

In a match with a rival with identical reputation and skills the attribute amount will translate into mentality as follows:

How to assess the mentality of the rival manager if the attribute is hidden? It's easy.

You should check two things: statistics from their last few matches (home) with equal rivals and the formation they played.

If the game is dominant (ball possession in the offensive period -> see ACTION ZONES) and their average positions in the game are higher than their opponents (-> see AVERAGE POSITIONS) we have an attacking mentality.

Conversely, if their average positions are lower and your opponent is more often in their half, you have a cautious mentality. 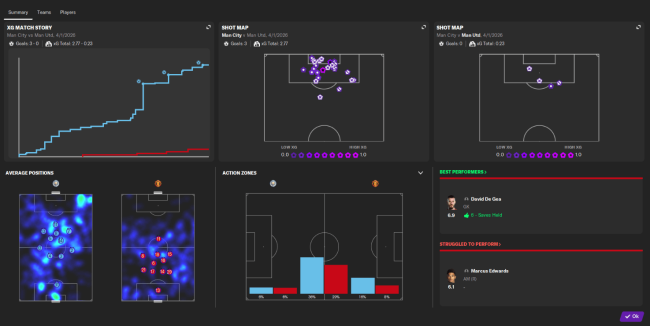 The most difficult in this group will be to recognize balanced rivals i.e. those who usually wait for play development and begin to attack or defend only as the situation develops on the pitch.

The problem is even greater because balanced managers make about 30% of all managers in the game.

This is where the tactical style and formations come to our aid.

If the statistics (average positions + action zones) do not clearly indicate offensive or cautious mentality, let's see what is the tactical style of the manager and what is his preferred formation.

These two pieces of information, analysed together, will allow us to correctly guess the opponent's mentality in most cases.

Football Manager distinguishes 8 tactical styles of managers and only two of them are not clearly related to the manager's mentality: gegenpress and tiki-taka.

Almost the same applies to formations.

In fact there are only two formations in Football Manager that are not clearly related to the mentality: 4-4-2 and 4-3-3 DM Wide.

All others indicate some specific preferences or tendency at least.

The most popular among them:

Putting all the information together you will be able to easily guess the mentality of most managers.

This does not mean of course that we will not find counter attack managers playing 4-5-1 or control possession playing defensively 4-2-3-1, but treating all this information complementary (not determinative) we will be right in most cases.

The last important information is the play width.

Two data from the match statistics come to our aid (let me remind you: we analyse statistics from last few home matches with equal rivals):

Unfortunately most of the teams will have so scattered statistics that it will be difficult to say for sure whether they are playing wide or narrow.

In that case it should be assumed that the rival plays in a balanced way. However we will only be interested in those cases where the tendency to play in the middle or on the wings will be clear.

This information, apart from choosing our offensive system, should also obviously determine the width of our defence also: 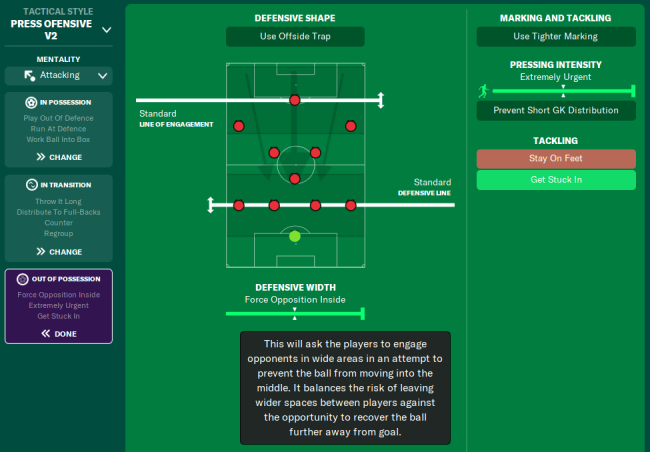 Attacking rivals are about half of all managers in the most important leagues in the game and most of them will defend with a higher line and putting pressure on our defenders. 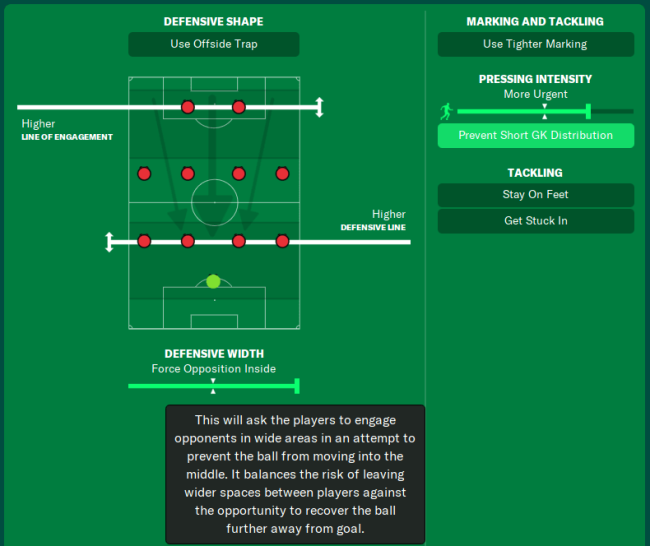 The choice of our offensive system is obvious in that case, but depending on the chosen formation and the roles and duties of our players, we should set tactical player instructions wisely.

Against an opponent who sets himself wide in defence we attack narrow of course, so all team instruction increasing the pressure in the centre will be welcome: 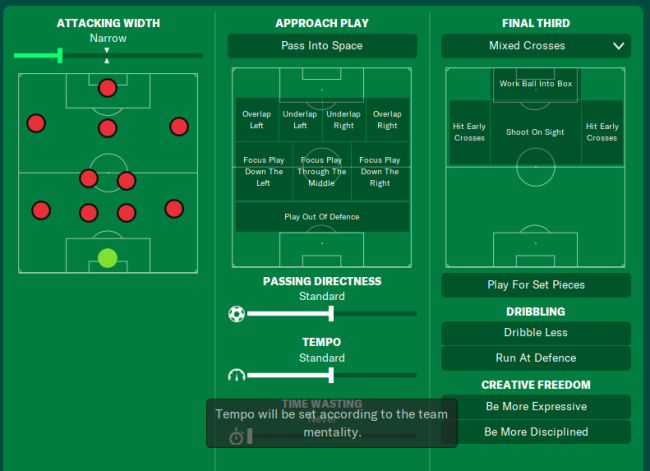 Avoid then in offensive formations such roles that will naturally look for space on the wings (CF, T, EG, IF/s, W/a, WTM), and the natural choices in this situation will be: AF, P, DLF, PF, IF/a, W/s, IW/s, AM, AP, SS.

Remember that in the above offensive system the width of your play and the passing options on the flanks must be provided by either side defenders (attack or support duties) or central midfielders looking for wide space (MEZ, AP, RPM). Otherwise the rival will narrow the field of play and we will start the festival of long shots.

The one third of all our opponents will be balanced managers. Most of them will defend with a high defensive line but close to the second line, so we should have no problem playing the ball from the deep.

They will set the standard defensive width, often with tighter marking. 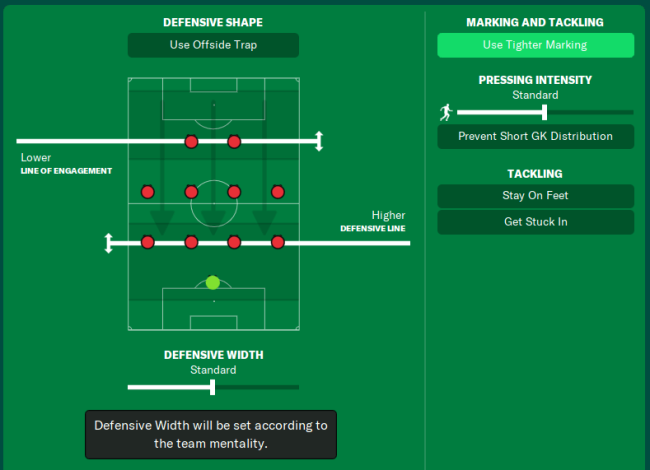 With an opponent with standard defensive width we should attack in a differential way, but the decision on a wide or narrow attacking width should result from the opponent's weakness or our strengths which will be emphasized during the match.

The rule is to gain an advantage in such a match, so all tactical team instructions that will help us to possess the ball will be appreciated. 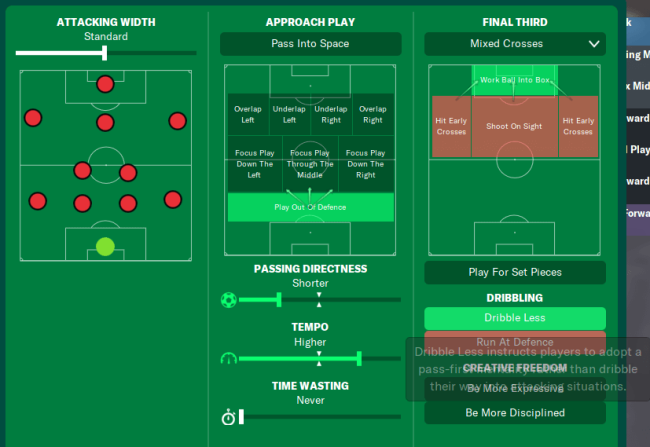 The choice of our offensive system gives us the widest range of possibilities.

The best in this case are systems that use different attack styles on each wing (even asymmetrical) with players who can enter the offensive third from the deep (IWB, BBM, CM/a, AP/a).

Although only one-fifth of the managers in Football Manager show defensive mentality, remember when leading a strong team (one of the favourites in the league) we will naturally compete with such opponents in most matches.

As a result, with the exception of a few league matches played away with equal rivals, it may happen that in all other matches we will see an opponent playing with a lower defensive line and no pressure on our defenders.

Setting the defensive width will depend on whether they will be favourite or equal rivals in the match against us (-> standard defensive width and a little higher) or not (-> then they will play narrow and deeper in defence) . Expect tight marking and many tackles. 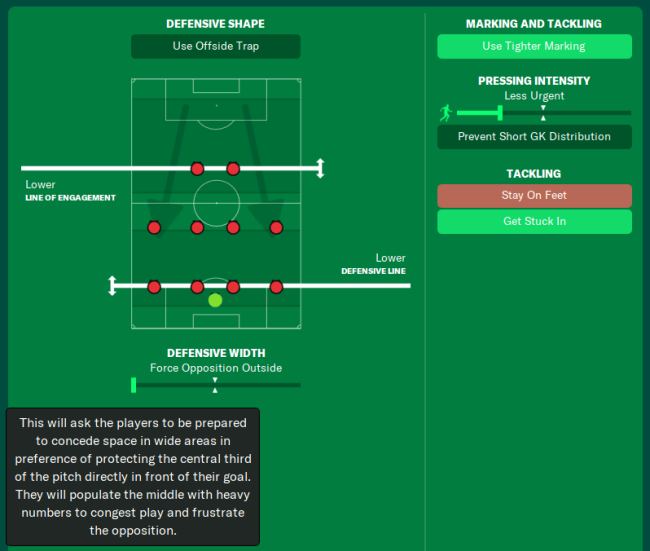 The choice of our offensive system is obvious in this case.

Against the narrow and lower defensive line we attack wider, so we use instructions that increase the pressure on the wings: 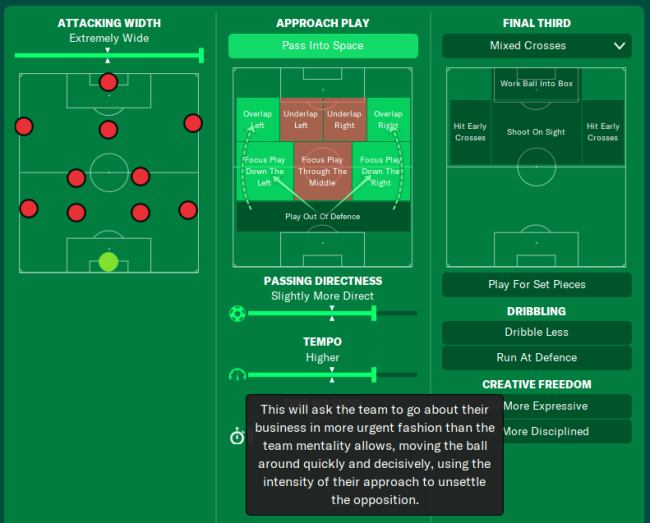 In that case please avoid in your offensive systems such roles that focus your activity in the center (AF, P, DLF, PF, IF/a, W/s, IW/w, AM, AP, SS) and use those looking for space on the flanks: CF, T, EG, IF/e, W/a, WTM, DW.

Mention that attacking a deeper defending opponent with wide offensive formation involving of side defenders we risk fast counterattacks with at least three exposed zones (the sides of the defence and the DM area).

So the necessary protection will be: much higher line of engagement and more urgent pressing intensity, but also counter-press in transition phase and support of central defenders by at least two players (defensive midfielder, central midfielder and/or side defender).

We will combine defending rules (Lessons 2-4) with attacking ones ( Lessons 5-7) and will learn two things: