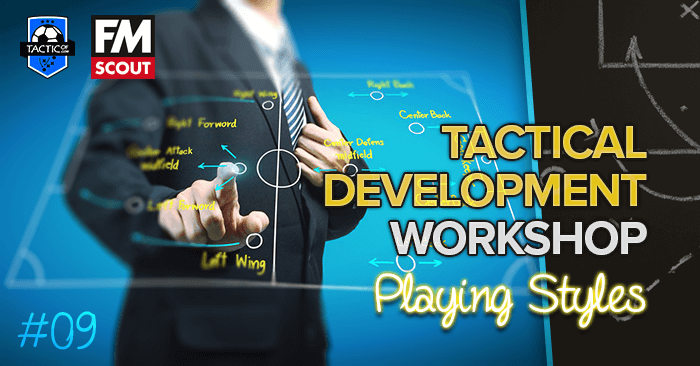 The style of our play in Football Manager depends mainly on the choices we make at the first, preliminary stage of building the identity of our own tactics.


Contrary to popular belief, neither defining the width of the game nor the length of the pass in the team instructions will determine our style of play in FM.
The game engine links these two elements very strongly to the assigned roles of the players on the pitch, and the strength of this link causes the observed match statistics which can surprise us.

Even with the choice of short passes, but playing with a Target Man or Ball Playing Defender we will observe many direct passes bypassing the second line.

If, on the other hand, we have Wingers or Mezzala in our squad the instruction of narrow play will not cause them to go inside and instead we will often observe play in the side sectors of the pitch.

The fundamental choices for the style of play include only:
• tempo of play,
• counter or hold shape in transition after winning the ball,
• passes into space or working the ball into box,
• roles assigned to our playmakers.

For the convenience of the reader, when presenting the five basic styles of play in Football Manager, I provide the range of team instructions required to achieve the desired image of the game.

This does not mean that the instructions listed presented below exhaust all the possibilities, but in combination with the examples of player roles presented, they ensure that the desired effect is achieved.

Assigning appropriate roles to players in a particular style of play is a difficult task because of the connections and relations that exist between players on the field.

The game engine defines for each possible role three basic elements that determine the player's behaviour on the pitch: the direction of movement with the ball (vector), the tempo of the game (time from receiving the ball to passing it) and the place occupied by player in the defensive shape of formation ie. in a game without the ball (position).

This is where the relations and interactions between players on the field in the same area primarily (but not exclusively) come from.

Thus, every change of a player's role on the pitch and almost every change of his duties (defence, support, attack) impact further changes in the assigned roles and tasks of his teammates.

Now that we know that the easiest way to build good tactics is to start with our best players (trying to assign them in the best roles and duties), we are faced with the challenges of limiting the chosen formation and further choices of roles and tasks.

For simplicity, in the examples presented below I've tried to choose systems that are varied and numerous enough to give the reader both a wide choice of roles as well as examples of playing with two, three or four central midfielders.

Controlling possession is a style in which a team attempts to maintain and secure possession of the ball within its own defensive zone (defensive third) or near the half line of the pitch (middle third).

There the team looks for opportunities to patiently build up action and from there starts attacks.

Tiki-taka is wrongly perceived as controlling possession of the ball. This is because the style focuses on ball possession exclusively in the opponent's defensive zone and therefore in the opponent's half (offensive third) which requires a high positional mobility and technical skills.

Maintaining a wide formation is crucial in providing passing options.

A style defined by sequences of consecutive individual "quick possessions". The team with the ball moves quickly.

A counter-attack occurs when the team regains possession of the ball and moves it into the attacking area with passes or dribbles (the ball must reach its destination in the opponent's half).

High pressing determines not only how high the team regains possession of the ball, but most importantly how dominant they are with the ball in the opponent's half (offensive third).

High pressing means regaining possession of the ball and keeping it in the opponent's half looking for an opportunity to launch a decisive attack.

Direct play involves teams trying to move the ball quickly toward the opponent's goal by using direct passes rather than continuous possession of the ball.

It is distinguished from counterattacking play by the forward distance gained each time a team has possession of the ball.