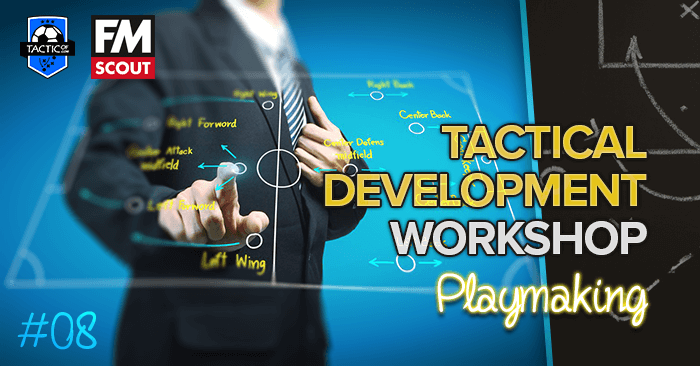 Welcome to the eighth lesson in Tactical Development Workshop.

Now pay attention. In this lesson we will only cover the team's play with the ball; in other words, that is the players' behavior during possession (attack) of the ball.

Regardless of what you learn from numerous guides and online tutorials, the Football Manager view of the game doesn't lie: 80% of the ball is playmaking by central midfielders, and only by those who play specific roles:

Contrary to popular belief, numerous tests (even of these very extravagant formations) show that the role of wingers (e.g. advanced playmaker) or central defenders (e.g. a ball-playing defender) in playmaking can be at most auxiliary (max. 20% of participation in creating the chances) and only if they are assigned roles and tasks in a specific way determining the game of the whole team (e.g. a advanced playmaker on the wing with no roles creating the game in the center).

When playing Football Manager, two factors determine not only the playing style of the whole team, but also the behaviour of the playmaker's teammates on the pitch:
• tempo - understood as the time to pass the ball to the teammates,
• passing directness.

We should take this opportunity to remind you about the harmfulness of the myth: short passes = slow pace.

There is no need to play this way, which increases the accuracy of our passes, but at the same time increases the number of interceptions (not to be confused with out of play passes!).

Although the FM engine no longer favours possession-based play, it is still the foundation of identity for tactical styles such as tiki-taka, vertical tiki-taka and, of course, control possession. 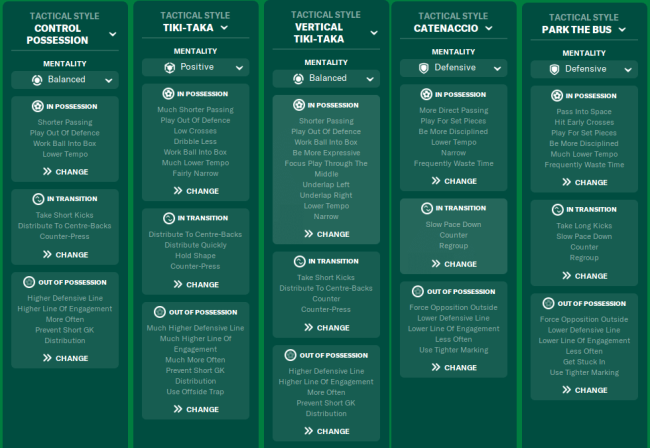 Of course, increasing the proportion of ball possession is also fostered by a lower tempo of play, shorter passes, command of passes into the penalty area, holding the shape of the formation once the ball has been won, and playing teammate roles that provide more positional control and patiently waiting for opportunities rather than looking for quick solutions (e.g. ball playing defender, advanced playmaker on the wing).

However, the key to creating chances from a position of calmly looking for errors in the opponent's formation is to define the roles of the playmakers in a way that encourages them to hold the ball after receiving it while waiting for the whole team to regroup to their starting positions.

Controlling possession will help you maintain all the classic playmaker roles, which are in their nature to create the game and build positional advantage within their zone of operation:

Despite the fact that high tempo of play is mostly associated with counter-attacking and gegenpressing, it can be used in wide offensive systems or in cautious route play. 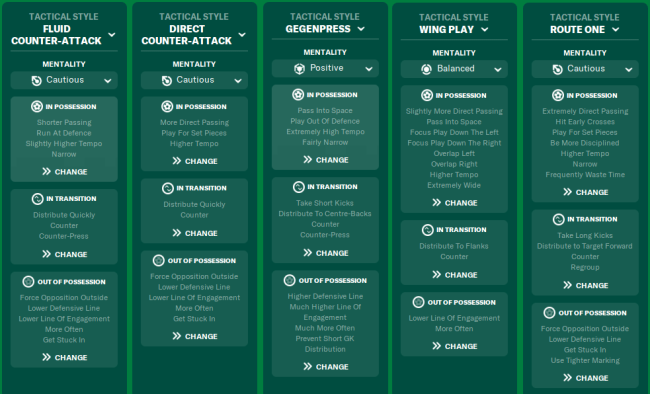 The high tempo of the game doesn't exclude short passes (as mentioned above), but it does decrease the accuracy of the plays especially when the team learns a new style. It forces our players to be more mobile.

The amplitude of the average positions of defenders and attackers WITH and WITHOUT the ball will be much greater, the amount of kilometers covered by the midfielders will increase, and the wingers will start playing in more space.

After all, the biggest change from low tempo will be the time that elapses between receiving and passing the ball to teammates by the playmaker, provided we assign him a role that encourages this:

A noticeable exception to the above-mentioned rule is basically created only when, after a long period of playing in deep defense, we receive the ball in our half in closed positions to lead the attack.

Any role other than the above will result in the fact that even with a team instruction to move faster, the almost reflexive intention of any playmaker will be to hold the ball or choose a safe pass to the teammate making the closest passing option.

If the choice to play the ball with short passes determines anything it is the AVERAGE POSITION OF OUR PLAYERS (sic!). This is the only parameter that is noticeably related to the change in the length of our passes. 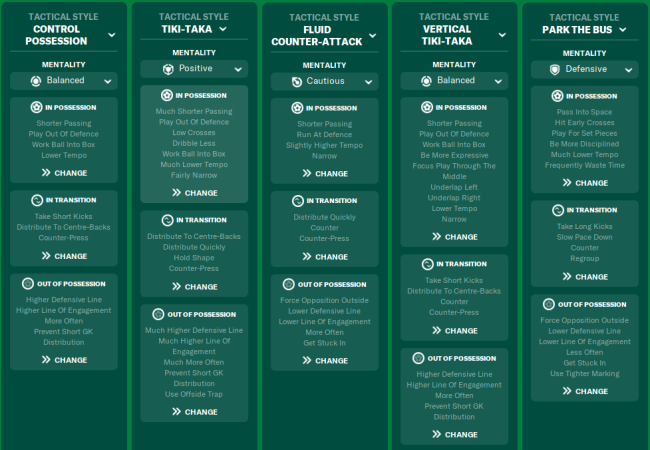 With wide play of very short passes, the average positions of our wingers and complete wing-backs will be noticeably narrower than with direct passes.

The narrowest ball-playing position our side players will occupy is only when three elements work together: narrow attacking play, short passes and roles that encourage them to cut inside.

Any playmaker in any role can play the ball with short passes.

Thus, the effectiveness of a playmaker's use of short passes, in addition to the obvious value of his technical attributes, are his recommended teammates rather than himself.

All side players with the task of cut inside (inverted wing-back or inverted winger, inside forward or raumdeuter) will be better teammates for short passes, and it is important to emphasize that the choice of these roles in no way determines the accuracy of the playmaker's passes, but only influences his average position with the ball during the match.

With teammates cutting inside, our playmaker will play much higher with the ball and will appear more often in the offensive third.

It should also be noted that the instruction to hold formation shape after winning the ball in transition phase noticeably increases the accuracy of short passes and reduces the number of interceptions by the opponent.


It seems legitimate to conclude that the choice of short passes can significantly narrow the positions of our side players and result in a lower attacking position for our playmaker.

Thus, when building your tactics, you should carefully consider the choice of roles of your side players and the team's command of the width of play in attack.

Similarly, instructing players to immediately counterattack after recovering the ball in transition phase noticeably increases the accuracy of direct passes, with the direct pass accuracy parameter reaching its highest value with simultaneous instruction to pass into space.

I didn't notice any increase or decrease in the number of interceptions by the opponent during the direct pass game depending on other team commands (except for the tempo of the play, which I already discussed above).

We can only speculate in this case about the effect on the number of interceptions of individual player attributes such as passing or playing off the ball in attack and tackling or positioning in defense.

I would be cautious here, however, as I have not noted any worthwhile correlation between player attributes and the short passes discussed above. 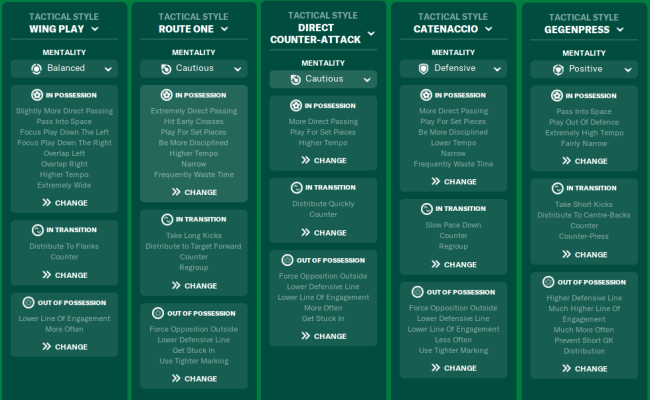 Any playmaker in any role can play the ball with direct passes.

The effectiveness of a playmaker's use of direct passes, apart from the obvious value of his technical attributes, is determined by his teammates rather than himself.


Summarizing the above conclusions, it seems that the choice of short passes gives us much more opportunities to vary the style of our play and the behavior of individual players, also through a wider choice of roles favoring short play.
On the other hand, the choice of direct passes seems to be limited by the need to play higher tempo, as the situation of slower forwarding the ball by direct passing was the only one when I noticed a significant decrease in the number of situations created by the team, and therefore xG.

The next two lessons will finalize our TDW series.