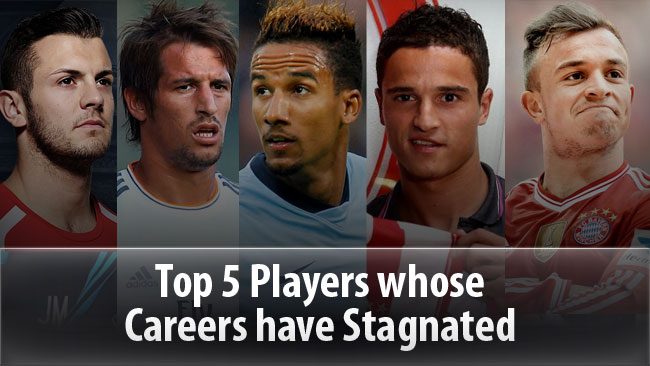 In the age of media that we live in, players are under the public spotlight much more than in the past. Many thrive under this pressure, and go onto to fulfil, or even in some cases, overcome their potential. However, many fail to live up to their promise, as their career dwindles away. Here is a list of 5 of the most extreme examples of these types of players, whose careers are in desperate need of a kick-start.

http://www.thesecretfootballer.com/wp-content/uploads/2014/05/wilshere.jpg
While many forgot he is just 22, much more was expected of England's ‘Golden Boy’. When he made his debut for his nation against Hungary at just 18 years old, many were tipping him to be the next big thing. A youngster who had already broken in the Arsenal first team, who possessed great movement, vision and passing; he was seen as the natural replacement for the likes of Frank Lampard and Steven Gerrard upon their retirement. However, some long spells out of the game with injuries halted his progression, and his role in the Arsenal side was taken over by Aaron Ramsey. Now a much less important figure in Arsene Wegner’s side, the future does not look bright for the player Fabio Capello described as ‘the future’.

http://www.fabio-coentrao.com/wp-content/gallery/fabio-coentrao/coentrao.jpg
Bought for around £25M plus Ezequiel Garay, Fabio Coentrao was at the time one of the most expensive left backs of all time. His move to Real brought with it a huge amount of pressure and expectation. Sadly, the Portuguese full back wasn’t able to ever settle at Real, always out shadowed by Marcelo. Under Ancelotti, his role was reduced even further, and after a proposed loan move to Manchester United fell through, he only featured 10 times last season, with many of those appearances played out of position. Now 26, Coentrao needs to push for a move away from the Spanish capital for the prime part of his career.

http://images.dailystar-uk.co.uk/dynamic/58/photos/538000/620x/14538.jpg
Sinclair is a prime example of a young player whose big move to a top club didn’t work out. When he made the switch from Swansea to Manchester City, the future was looking bright for the winger, with many predicting he was a future England star in the making. However, when he failed to break into the City starting line-up, his career took a turn for the worse. Shunned to the reserves, Sinclair barely featured in his first season, and was quickly sent off on a loan deal to West Brom in the following year. Now back at the club, the future does not look bright for the 25 year old, as he is even further down the pecking order.

http://www.soccernews.nl/uploads/ibrahim-afellay(olympiakos)(25-08-2014).jpg
Ibrahim Afellay followed in the footsteps of the likes of Robin van Persie, Arjen Robben and Wesley Sneijder when he was awarded the Eredivisie equivalent of the Young Player of the Year in 2007. His brilliant technical abilities and passing prowess made him an ideal option when he was bought by Catalan giants Barcelona, but it was never to be. Unable to break into the first team, Afellay failed to progress upto the level expected of him, largely due to his persistent injury problems. Now 28, and out on loan at Olympiacos, Afellay is out of both the Barca and Holland setup, with the end of his career looking bleak, many will be still wondering what happened to the man some tipped to be the next Johan Cruyff.

http://cdn.caughtoffside.com/wp-content/uploads/2014/01/Xherdan-Shaqiri-Bayern-Munich.jpg
At a club like Bayern Munich where Arjen Robben, Franck Ribery, Mario Gotze and Thomas Muller all fight for their position in the first team, it is no wonder Swiss wonderkid Xherdan Shaqiri has failed to impress. A star in his homeland playing for Basel, he made the move to the German club in 2012. After a successful first season in which he managed to feature 26 times in the league, his playing time has slowly decreased. Unable to displace the current attacking options at the club, he might have to deal with the likes of Mesut Ozil in the future, who has been linked with the club. Whether he should stay and fight for his place, or play his trade elsewhere, the choice is still available for the 23 year old, who unlike some on this list, is young enough to still turn his career around.