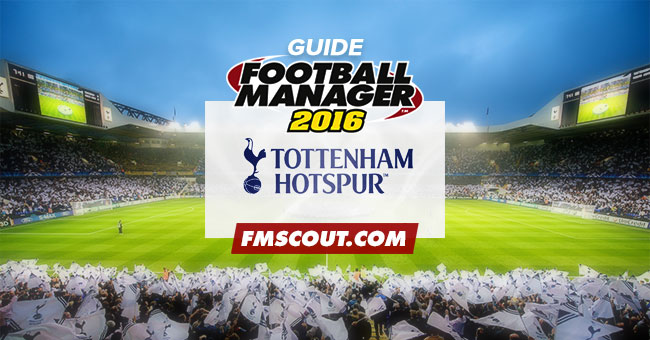 Tottenham have always been one of the best teams in England, consistently qualifying for the Europa League and sometimes even getting a top four spot. Founded in 1881, Tottenham's first major trophy was the FA Cup in 1901. Since then, they have won the FA Cup another 7 times, the Football League (the old Premier League), the Championship and the Euro Cup twice, the League Cup four times and the Cup Winners' Cup once, in 1963. Those may seem a lot, but the worrying fact is Tottenham's last trophy was the League Cup in 2008. Can you make history in the white side of London?

When you join Spurs, you get a minimum of £1.48Mp/w wage budget plus £17M to spend on transfers if you agree to the basic expectations (Premier Division-Qualify for Europa League; FA Cup-Reach Sixth Round; Europa League-Reach Group Stage). You can choose the biggest transfer and wage budget, £23M and £1.74Mp/w if you agree to win the League, reach the Final in the FA Cup and reach the Second Knockout Round in the Europa League, but I wouldn't recommend it simply because the team is not title challenge material (yet).

You also get 90% of the transfer profits directly in your transfer budget. Overall the basic expectations are fine, you can't expect to go much better than a 5th place in the League due to Chelsea, City, United, Arsenal and Liverpool all having similar, if not better, players than you. In Europe, however, you can probably get out of the group stage easily, so I would put it to Reach First Knockout Round and get the £0.6M increase in the transfer budget and £250k p/w in the wage budget.

Goalkeepers
Hugo Lloris - Your number 1. His reflexes are insane and he's consistent too.
Michel Vorm - Backup to Lloris. Not bad but not Lloris level either.
Potential signings: -
Young players in team: Luke McGee, Thomas Glover

Right backs
Kyle Walker - Good fullback or wingback, depending on the tactic you use. He doesn't have the best technical and mental stats, but his physicals are insane.
Kieran Trippier - New signing from Burnley, similar to Walker in everything, but Walker gets the first team spot just because of international experience.
Potential transfers: Šime Vrsaljko, Mattia de Sciglio.
Young players: Peters

Left backs
Danny Rose - Same as Walker, just a bit better in everything. Holds the first team spot ahead of Davies, he's homegrown in the club too.
Ben Davies - Solid backup for Rose, his only weakness is his pace but it can be improved in training.
Potential transfers: Domenico Criscito
Young players: -

Central defenders
Jan Vertonghen - One of the best CBs in the Premier League. He's in his prime, so in 2-3 years you should sell him to maximize his value.
Toby Alderweireld - New signing from Atletico Madrid. Him and Vertonghen make up an excellent defence, both in the Belgium and in the Tottenham lineup.
Federico Fazio - Outstanding attributes in the air. He's an amazing backup to Alderweireld and can even push him away from the first team slot. The only problem is his age.
Kevin Wimmer - Another new signing. He should be given some game time in the cups or Europe, just to develop those stats.
Potential transfers: None, you already have some great defenders.
Young players: Cameron Carter-Vickers, Miloš Veljković

Midfielders
Eric Dier - Natural Right back and Central defender, but I play him as a Half back in the Defensive midfield position as it's the weak position of the team. He's able to perform outstandingly in any role as he is very versatile. The Manchester clubs sometimes make an offer for him in the 1st window. Do not sell him, you won't find many players like him. His only weakness is his strength, but that can be improved as he's only 21.
Mousa Dembele - The big midfielder, another Belgian international on the team, is an amazing team player. He should be in the starting 11 week in week out as a B2B midfielder as he has some pretty good attributes both offensively and defensively. He is mainly used as a defensive player, but is capable of pulling out some great dribbles (his Dribbling attribute is 18 and Flair is 16).
Ryan Mason - An academy graduate, the young playmaker appeared in 31 matches out of 38 possible in the League last year, and was one of the most pleasant surprises on the team. He's a good player with an amazing work rate and tackling, making him an ok choice for the defensive midfield. The weaknesses are his Determination and his Strength, but despite that he does a good job in the midfield, especially in the DLP or CM role.
Nabil Bentaleb - The young Algerian is another academy graduate who can replace Eriksen or Dembele in either role nicely. Best used as a DLP or RP, he does a great job delivering those balls forward. I use him ahead of Dembele just because of how good he develops.
Dele Alli - The English wonderkid, bought for 5M from MK Dons, has been impressing this season, and has also been rewarded some games in the England national team. On the game he's described as a flamboyant midfielder and is best used as a Roaming playmaker. You can get him tutored by Dembele to raise his Determination.
Christian Eriksen - And here he is! Spurs' most valued player, the Danish playmaker, bought two years ago from Ajax for a meagre 10M, has been improving more and more. He can score 10 to 15 goals per season on free kicks only (19 in Free Kick taking) and is best used as an Advanced playmaker.
Potential transfers: -
Young players: Joshua Onomah, Will Miller, Tom Carroll

Wingers
Erik Lamela - Another star in the team. It's going to be a challenge to keep him on the team as he's always wanted by the big teams. He's very versatile and can play anywhere in the Attacking midfield, but is best used as an Inside forward or Advanced playmaker on the right side. If you need money you can sell him as you have a huge depth in the role, but I don't sell him.
Nacer Chadli - The last Belgian on the team, he is comfortable with either foot and is extremely versatile. I use him as a backup on the AML position but can easily be a first team player if you like him more than...
Heung Son-Min - This transfer window's big signing is also versatile and either footed. Should be played ahead of Chadli as he's younger and has more potential. I use him as an Inside forward on the left side as he's fast and has good Finishing (17).
Andros Townsend - Another very good winger and also an academy graduate. Can play on both wings in any role. I use him as Lamela's backup. He has, however, the habit of shooting from distance and may waste a lot of good chances as his Long shots attribute is only 12.
Potential transfers: Lamela (out, 25M); Sadio Mane (in, 30M)
Young players: Alex Pritchard, Kenneth McEvoy

Strikers
Harry Kane - The last academy graduate on the list, Harry scored 21 goal in the League last season and was surely the standout performer on the team. Manchester United often sniff around him, just tell them no, because you won't find a better striker who fits the Target man position, which is a must if you use Inside forwards like I do. His best roles are Target man and Complete forward. Use him wisely on set pieces too, he may score a lot as he's tall and has a good heading and jumping reach.
Clinton N'Jie - The new signing, bought from Lyon for 10M, is underrated in FM. His best attributes are Acceleration and Pace, and he can make a good Poacher, which unfortunately doesn't fit the team, so I suggest to sell him or send him on loan to see if he improves.
Potential transfers: Charlie Austin, Abel Hernandez
Young players: Shayon Harrison 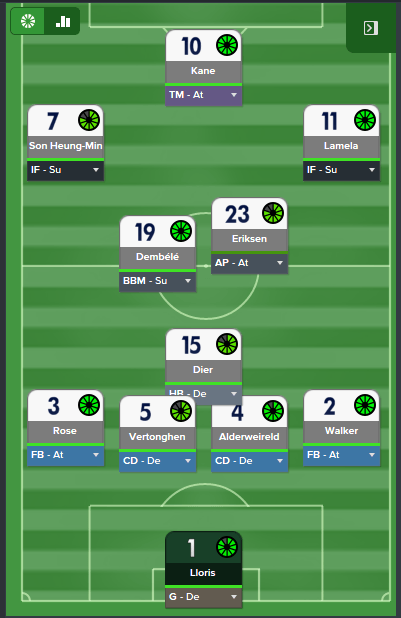 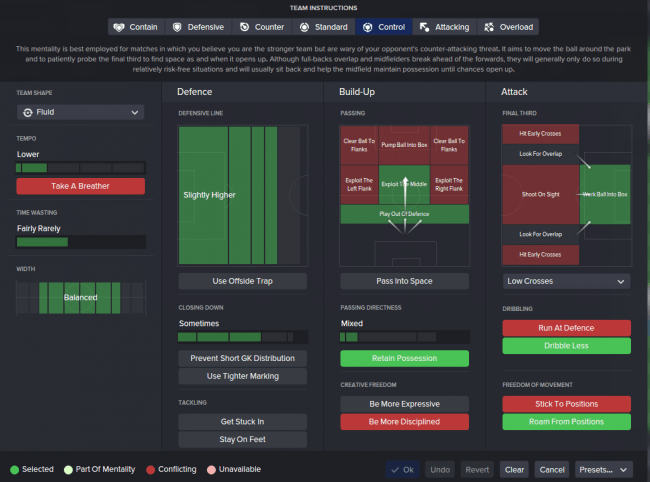 This is my favourite tactic, and is similar to the one Pochettino uses in real life. It allows ball possession, defensive stability, midfield control and a deadly attacking trio. 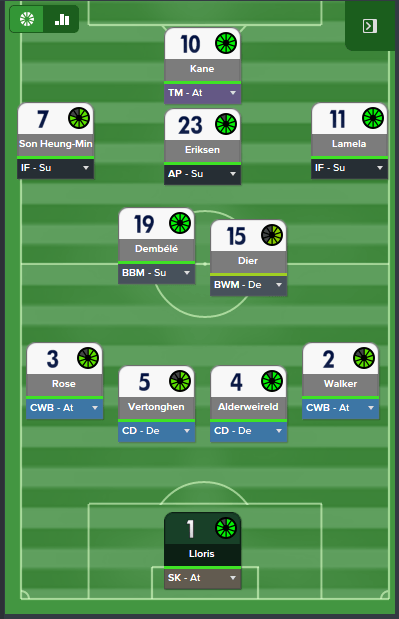 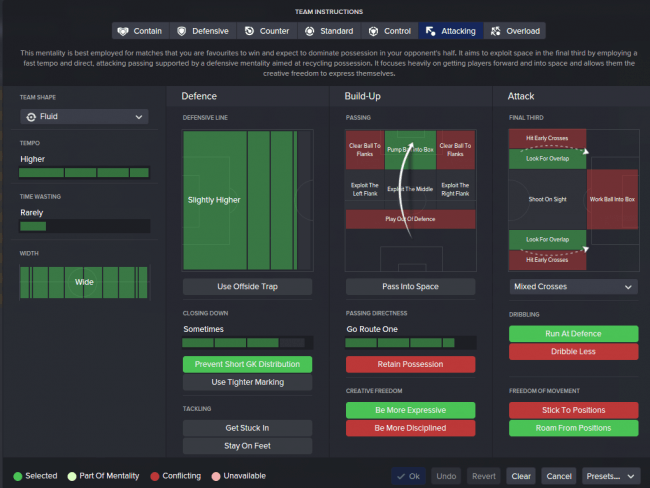 The Ancelotti-style tactic, it's more attacking and faster than the first one. I use it against lower league teams and teams with a bad defence. 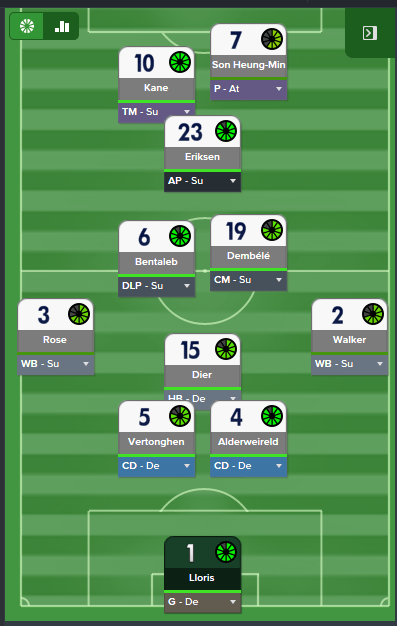 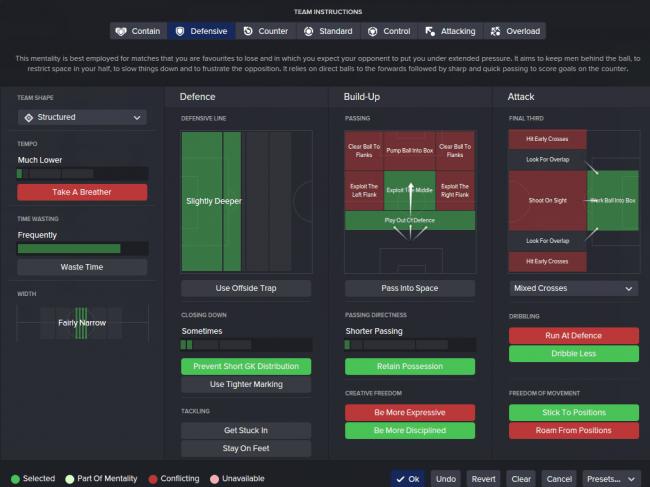 A narrow and slow tactic for wasting time and maintain narrow leads.

Tottenham have a good and young squad this year, with no need of much strengthening. Use your best players, Eriksen, Kane, Lloris and Dier, and build a team around those wonderkids. Good luck!