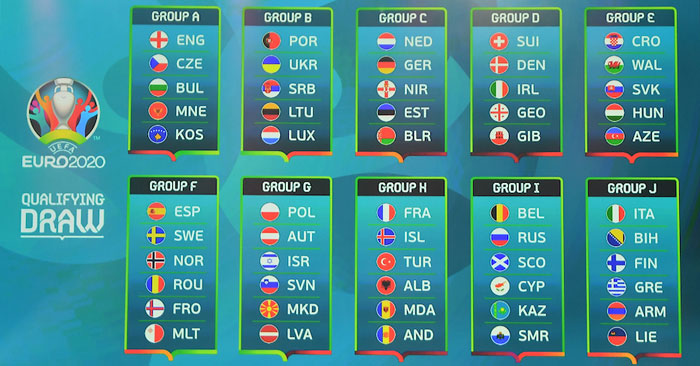 PATH D
Semi-final 1: Georgia 2-0 Belarus - Georgia and Belarus are about equally good - or maybe equally bad would be a more accurate way of phrasing it. They both finished 4th place in their qualification groups. But Georgia obtained eight points whereas Belarus only obtained four. Pair this along with the fact that Georgia has home advantage and a Georgian victory looks more than probable. I’m gonna say 2-0 Georgia.

Semi-final 2: North Macedonia 1-2 Kosovo - Kosovo has made stunning progress since becoming a FIFA and UEFA member in 2016. Taking strong steps forward. Becoming better and better with each qualification campaign. They finished third with eleven points. Securing impressive wins over Bulgaria, Czech Republic and Montenegro in the process. Not to mention scoring three goals away against England in a spectacular 5-3 loss. North Macedonia also finished third, but obtained three more points and they are the home team in this fixture. Despite this, I think Kosovo is marginally better and they have proven to be a team that plays well away too. So I don’t think that will doom them to a defeat. My prediction is 2-1 Kosovo.

Hypothetical final: Georgia 0-1 Kosovo - If Kosovo can beat North Macedonia, they can certainly beat Georgia. Without being overly analytical, I’ll simply say Kosovo are superior in every position. The only thing Georgia have going for them is home advantage. Which won’t be enough in the end. 1-0 Kosovo.

PATH C
Semi-final 1: Norway 1-0 Serbia - If you ignore Norway’s matches against the 6th-placed team in their group, they have 11 points and Serbia 14 points. Despite this, I slightly favor Norway. Since they have proven more against stronger teams. Namely Spain - only losing 2-1 away after a penalty and holding them to a 1-1 draw at home. The very experienced Lars Lagerbäck is their coach and plays defensive and disiplined football. Scoring the amount of goals needed to win. These factors paired home advantage will be enough to give Norway a 1-0 win.

Semi-final 2: Scotland 3-2 Israel - Both Scotland and Israel have been lackluster recently. Scotland opened their qualification campaign with a 3-0 loss against Kazakhstan but have since then somewhat bounced back, finishing third and only accumulating 9 points (excluding matches against the 6th-placed team). Israel finished 5th and got five points. So Scotland is the clear favorite here, especially with their home advantage taken into consideration. In the 2018-19 UEFA Nations League season, Scotland and Israel were in the same group. Israel won 2-1 at home and Scotland won 3-2 at home. My gut is telling me we will see a repeat of that result. I think Scotland will win 3-2 once again. They will be motivated to perform well in front of a home crowd, finally playing in another major tournament. Which will result in many goals. However, Israel possess the goal machine Eran Zahavi. Who was only bested by Harry Kane when it came to goals scored in European Qualifiers.

Hypothetical final: Norway 2-0 Scotland - I consider Scotland to be worse than Serbia so if Norway wins against Serbia I’ll certainly expect them to beat Scotland, especially with home advantage. Being Swedish, I’ll admit I have a soft spot for Norway so I might be overestimating them. But I legitimately think they are a great team. With (as previously stated) the superb coach Lars Lagerbäck, a disciplined squad and a couple of upcoming superstars. I’m gonna be somewhat bold and say 2-0 Norway. Scotland is one level slightly below Norway in every aspect in my opinion.

PATH B
Semi-final 1: Bosnia and Herzegovina 2-1 Northern Ireland - I actually predicted Bosnia and Herzegovina to qualify directly from their group so seeing them here in the play-offs disappoints me quite a bit. They decidedly won their Nations League group, defeating Northern Ireland twice in the process. But they are a shadow of their former selves. However, their only home loss in the qualifiers came against Italy, which was expected. Which favors them greatly as the home team of this fixture. Still though, they could only manage a 2-2 draw against a historically awful Greece. Northern Ireland lost every game in the Nations League but made a decent recovery for the European Qualifiers. Winning four games and losing respectably to the Netherlands and Germany. The only exception being a 6-1 demolition. At one point they even lead the Netherlands 1-0 away after a goal in the 75th minute, but quickly crumbled after three late goals from the Netherlands. And they drew 0-0 against them in the second fixture despite missing a penalty. This match is intruiging, because my brain is telling me Northern Ireland will win but my gut is saying Bosnia and Herzegovina. Based on performances in the European Qualifiers I think Northern Ireland are superior. Yet on the day in front of a home crowd I see Bosnia winning 2-1. Remember, their only home loss in the qualifiers was against Italy, and Northern Ireland are no Italy.

Semi-final 2: Slovakia p. 1-1 Republic of Ireland - This game is painfully hard to predict because they’re such evenly matched teams. They both finished in third place with 13 points, and even the same goal difference. Slovakia should consider themselves lucky to be the home team, since Ireland’s only away win was a narrow 1-0 against Gibraltar. In fact, the only game when Ireland scored more than one goal (home and away) was their home game against Gibraltar. But it’s worth pointing out Ireland in general are a team who neither scores many goals or concedes many, even against stronger opponents. Also, Slovakia’s home record is okay, not great. Wins against Hungary and Azerbaijan but s draw against Wales and a 4-0 demolition against Croatia. In my opinion, this game “screams” 1-1. And in a penalty shootout, the home team is always favored since the home team on but boo the opposition, making them less likely to score. 1-1 and Slovakia win the subsequent penalty shootout. Tragic as it may be, I suspect both “Irelands” will be eliminated in the semi-finals.

Hypothetical final: Bosnia and Herzegovina p. 2-2 Slovakia - Another game which is excruciating to predict. Anything can happen. Despite Slovakia performing slightly better in qualification, they are about even with Bosnia. Especially when taking Bosnia’s home advantage into account. Bosnia also have an upper hand historically, boasting three wins in the nations four total encounters. However, all patterns break at some point. So I don’t wanna suggest those historic results guarantee Bosnia a win. Slovakia are a pretty good away team, though. Winning 5-1 against Azerbaijan and Hungary 2-1, and I’d consider Hungary to be about even with Bosnia. I could go on and on about how even the teams are and that anyone can win. But instead I’m gonna be bold and simply say the game will finish 2-2 with Bosnia and Herzegovina winning the subsequent shootout.

PATH A
Semi-final 1: Iceland 2-1 Romania - We all remember Iceland’s cinderella story in 2016 when they reached the quarter-finals of the Euros. This success persisted throughout 2018 World Cup qualification in the form of Iceland winning their group, ahead of even Croatia. Yet at the World Cup itself they disappointed even though they weren’t terrible. After the World Cup and resignation of coach Lars Lagerbäck their fall has been dramatic. Losing every game in the Nations League (against good teams like Switzerland and Belgium, but still) and having a poor qualification campaign. Finishing way behind Turkey and even losing a game to Albania. However, I think Romania are even worse. Although marginally. And I favor Iceland as the home team, especially since their only loss at home was against France. They won all the other home games. Excluding games played against Malta and the Faroe Islands, the only POINT they obtained was in their 2-2 game against Norway. And it was a last second goal. This time around I don’t think they’ll get that last second equalizer. Iceland will win 2-1.

Semi-final 2: Bulgaria 1-2 Hungary - I had quite high expectations of Bulgaria in these qualifiers, but was horrifically disappointed. They finished fourth and only won ONE game. The one thing that favors them slightly is their home advantage. But I don’t think that’ll be enough. Even though Hungary has a horrible away record. In the European Qualifiers, the only away game they scored a goal in was when they defeated Azerbaijan 3-1. And right now, I’d say Bulgaria are about one goal better than Azerbaijan. So they will “only” lose 2-1.

Hypothetical final: Hungary 1-0 Iceland - Hungary’s home record is great. Their only non-win was a 2-1 slip up against Slovakia. But other than that they won every game, even defeating Croatia. So for me they are the favorites even though it won’t come easily for them. Iceland even lost away to Albania in qualifiers and could only put two past the likes of Andorra. I suspect the game will be tense since the winner goes to the Euros and neither till will mess up, resulting in safe and rather boring football. Hungary just edging out Iceland 1-0.