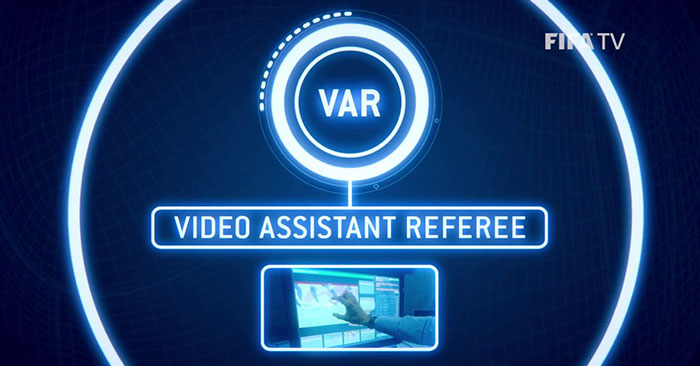 According to Wikipedia, the video assistant referee s a match official in association football who reviews decisions made by the head referee with the use of video footage and a headset for communication.

Following extensive trialling in a number of major competitions, VAR was first written into the Laws of the Game by the International Football Association Board. Operating under the philosophy of "minimal interference, maximum benefit", the VAR system seeks to provide a way for "clear and obvious errors" and "serious missed incidents" to be corrected.

According to the official rules, the four types of decisions VAR can intervene in are;

- Goal decisions (offences by the attacking team that result in a goal).
- Penalty decisions (whether or not an offence has been made by the defensive team in their own box).
- Straight red cards (these are subject to review every time.)
- Mistaken identity in giving a yellow or red card.

According to the rules of the game, VAR can only intervene when a clear and obvious error has been made by the head referee.

Seems like a good system right? Well, today I'll try and disprove of VAR in a few points and explain why it needs to be removed from football.

1. It's rendering referees uselss
Before 2014-15, referees trusted either their own instincts or that of the linesman nearest to the play. This kept decisions quick, and you'd rarely find a decision to take longer than 10-15 seconds to verify the call. Referees are employed to trust themselves and make the right calls to the best of their ability. VAR ensures this isn't the case.

2. It takes too long for a decision to be made
On average, a screen review takes 68 seconds to complete. Enough said. When more than one of these are occurring in-game, it creates a break in momentum and play. It's of a major disadvantage for the team with the momentum, as these breaks in play allow the defending team to regroup and even take over momentum.

3. Decisions are often incorrect
According to research by the website Chuck No Risk, 23% of Bundesliga decisions are wrong. That stat might seem ugly, however, it's often the game-deciding decisions that are either controversial or blatant that fuse social media blowups and raging journalists.

Those 3 points are just the beginning. Despite the promise of "minimal impact", the VAR is used more than linesman in a lot of games. If we don't stop the raid technology is conducting on football, football will no longer be "the beautiful game."

What do you think about the VAR? Let me know below.

Discussion: VAR - The Worst Thing to Happen to Football