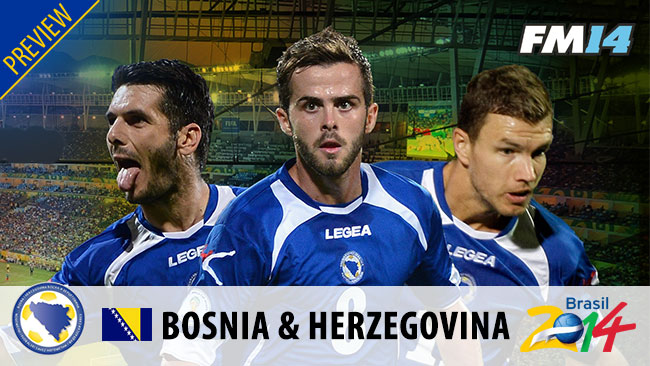 Bosnia and Herzegovina is a small country population 3.9 million, and a relatively new player to the competitive scene, prior to their beginning was being part of Yugoslavia’s team. Before the state becoming a republic in 1992, and what the country is eventually today in 1995. In the footballing world they acquired FIFA registration in 1996, and UEFA registration soon followed in 1998.

In group F they have to continue the world cup tradition of keeping Messi, and an aging but dangerous Argentina squad quiet, alongside a fairly good Iran under Carlos Queiroz, and Nigeria who seem to qualify for most world cups of late, who have well... Shola Ameobi... let’s move on.

With only registering and being allowed to compete in qualifying after the UEFA registration in 1998 in mind: Bosnia and Herzegovina have only got to the playoff stage of world cup qualifying prior to this tournament, so this is uncharted territory. Especially considering that this team has not played in a Euro competition either. Making them an unknown factor in regards to the format of an international centrepiece, raising question marks over their capability to perform on the world stage.

So Bosnia and Herzegovina do not have a star studded team, but they do have a few gems, which could cause problems for those in group F:

Possibly the most recognised player in the team, currently coming off a strong season for Manchester City, resulting in starting 3rd choice striker, and finishing as a key player to some extent. But more importantly he finished second top scorer in the UEFA section of qualifying with 10 goals. His ability to both be a threat in the air, and with the ball at his feet (as shown in his FM attributes) make him a force to be reckoned with.

Personally one of my favourite players, Pjanic’s performances from midfield have helped Roma get to a second placed finish in Serie A behind the unstoppable Juventus. Also scoring 4 and assisting 8 from midfield shows his creative talents in the last 12 games he has played for Bosnia and Herzegovina. His attributes point towards being a playmaker, one which provides Dzeko with ammunition from the centre.

The big man between the sticks Begovic has made a name for himself with his performances for Stoke, often being used as the last line of defence, he has grown up in the Premier League with the best, and is one of Bosnia and Herzegovina’s big assets. An asset which may provide hope against some of the big strikers bearing down on his goal.

The German born left-back is causing a stir also gathering 40 appearances in 3 years at Schalke 04, and breaking into the international set up 8 months ago to secure his place on the plane. Seems like a prospect will probably be used sparingly, but one to watch in future tournaments, and games for Bosnia and Herzegovina.

Winger spent last 6 months playing for Galatasaray 13 appearances in all competitions, had a solid start to his international career also with 2 goals in 7 appearances, the young 22 year old winger is likely to take a seat on the bench, but may be used to liven things up for Bosnia and Herzegovina.

Safet Sušić - was a PSG legend in his playing days, but after a management career based mainly in Turkey, he returned to manage the team of his birth, and who he represented through Yugoslavia in his playing days. Tends to focus on attack with the weapons he has, leads to slightly unbalanced in terms of defense/attack. But this has been shored up as of late with sacrificing two strikers for one.

150-1 in some parts to win, and that’s for a reason, Bosnia and Herzegovina are
entering their first tournament. There's a distinct gap between star players and the rest. They are up against Argentina, and 2 experienced World Cup Teams.

But all in all, their pure firepower, and creativity could get them through in second place in the group. And then in my opinion they face more of an uphill task against the 1st place of Group E (which will probably be France or Switzerland) so I predict Second Round exit.