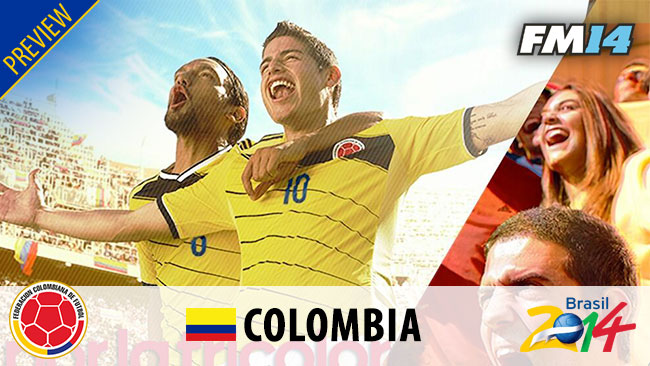 They've been called the next golden generation, but will they live up to their name in Brazil without their star player? Will someone else take place alongside legends like Escobar and Valderrama in history? The questions are many, expectations are high and answers are about to come.

Los Cafeteros has been placed in Group C along with Ivoy Coast, Japan and Greece. This means they will face the likes of Drogba and Honda in what can be viewed as a group of moderate competitiveness. None of the teams have enjoyed great success in the WC, however Greece did pull off one of the greatest upsets in football history as they won the European Championship 2004.

Despite the golden generation spearheaded by Carlos Valderrama in the 90s, Colombia have never reached the final 8 of the WC. Instead one could argue that their most famous moment in football took place outside the arenas as Andres Escobar was tragically killed after scoring an incesive own goal in the 1994 WC. Colombia will hope to create new memories ON the pitch this summer.

With superstar Falcao out injured during the entire tournament, Jackson Martinez may very well prove to be Colombia's key to success in Brazil. The ever lethal striker has a couple of fantastic seasons behind him in Porto and has been rumoured to numerous top clubs around Europe the last couple of transfer windows. Though he hasn't started many games during the qualification phase, Martinez has still managed to grab 3 goals in 3 starts on the way to Brazil. If the team is going to succeed, Martinez will have to produce.

The Colombian midfield is an offensive force to be reckoned with. In a wealth of talent, the one that perhaps sticks out the most is Martinez former teammate James Rodriguez. Touted as the next Valderrama, Rodriguez swift movement with the ball and ability to create chances caught the eyes of ambitious side Monaco who signed him last summer. During his first year in Ligue 1 Rodriguez registered 9 goals and a league high 12 assists.

In what has been a surprisingly sturdy defence, the seasoned team captain Mario Yepes will be crucial with his routine to the fairly inexperienced side. As a part of the 2001 Copa America Champions side, Yepes is the last playing son of the golden generation. Though he may be lacking in individual quality, Yepes has led his fellow defenders in great fashion as Colombia was the lowest conceeding team in the South American Qualifers, with only 13 balls finding the back of the net in 16 games. If Colombia are to make a mark in this years tournament, Yepes and his defence will have to play at least as good as in the qualifiers.

For all of us FM-lovers one player will be of particular interest - Eder Alvarez Balanta. In FM14 he evolves to an absolute beast, one of the best players in the game. In real life he's been called the best defender in South America and played a big part as River Plate completed the comeback from relegation and won the Argentine top flight. I'm a bit ashamed to admit I've never seen him play, but with the amount of praise he has received we might witness a revelation if he's given the chance to play.

Jose Pekerman is the first foreign Los Cafeteros manager in over 30 years. After being appointed early in the qualification campaign, the Argentine led the team to an impressive second place in the group with only his native giants finishing ahead. In case you weren't sick of his mentioning already, Valderrama said that Pekerman 'has given Colombian football its identity back - a sense of adventure, fun and source of national pride'. Pekermans biggest accomplishments in football thus far are three U20WC championships and a quarter-final loss in the 2006 WC, all with Argentina.

Unavailable due to Injury

The absence of the teams biggest star Falcao is a huge blow to Los Cafeteros. The Monaco striker lost his race against the clock trying to come back from a knee-injury and the whole world of football mourns with him and his countrymen, he could have been a main attraction in the tournament. Falcao is however not the only Colombian nation to miss the WC: Aquivaldo Mosquera, Luis Perea, Macnelly Torres, Edwin Valencia, Elkin Soto and Luis Muriel will all be out of action this summer.

According to the media Colombia should progress on from the group stage. From there on they will not be favourites in any games as one out of Uruguay, Italy or England probably will be waiting in the knockout stages. They are on the other hand considered somewhat of a dark horse and though not being favourites, no one would be shocked if Colombia should beat one of the above mentioned.

What do I think? Just like the media I believe that Los Cafeteros should progress from the group stage with relative ease, even though Japan and Ivory Coast will both put up fights. If Martinez also finds the net while Yepes can regain in the back, I don't see why this team shouldn't go on and challenge for a place in the top 8 or maybe even top 4. Who knows, maybe people will refer to the legend Rodriguez every other second when writing about Los Cafeteros in the future, all because that new golden generation and their conquests in Brazil 2014... 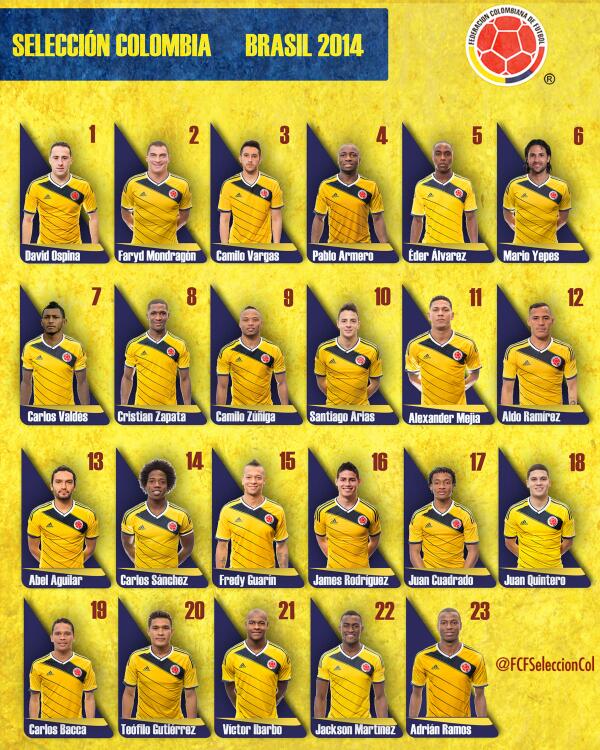