Despite not being tipped as one of the favourites for the cup, Greece has won competitions before when being unfavoured, but can history repeat in Brazil in 2014 as it did in Portugal in 2004. A decade on and Greece have the chance to do something big in Brazil, but many people are saying otherwise.

Having been placed in Group C alongside Colombia, Cote D’Ivoire and Japan, they may not be expected to qualify for the knockout rounds, but as with any World Cup, anything could happen. 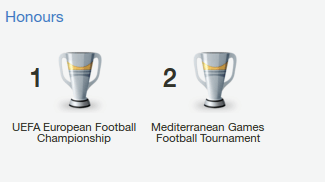 Greece is not a nation with a strong history of success in the World Cup, with them only ever appearing in the group stages. They have however won tournaments before, and as a footballing nation seem to be growing, so they could be a chance to make their country proud.

As a member of the ever improving and impressing Borussia Dortmund side that has pushed Bayern for the title in the last few seasons, you could say that Sokratis Papastathopoulos will be one of the key players for Ehtniki in Brazil. With 50 caps to his name already, his international stock is growing, and so is his importance to his national team.

Despite having a very poor campaign with Fulham after joining from Olyampiakos in January, and struggling for game time since he joined, the world cup could provide a good opportunity for Kostas Mitroglou to put that all behind him and show the coaching staff at Fulham what he can really do, as well as showcasing himself for a potential move should it materialise. His goals should be important for Greece, and he has the talent to cause his opposition damage should he play to his full potential.

Whilst not possessing the stock of fellow defender Sokratis Papasthathopoulos, Kostas Manolas has the potential to provide a good showing in Brazil. The Olympiakos defender is a very strong footballer, and will only add to the already strong defence that ethniki possess. Brazil 2014 could be his chance to show himself to the world, and gain a move to one of the big leagues in Europe.

Whilst not being a well known manager, Fernando Santos has managed to get Greece to the World Cup, and deserves a chance to showcase his talents on the biggest stage. Whether or not he has the talent to get Greece any further than the group stage remains to be seen, but whatever he does in Brazil can only be positive for both himself and the team.

Many people don’t expect Greece to make it out of the group stage, with their group featuring a few strong nations in Japan, Colombia and Cote D’Ivoire. With that said however, they may not be a total write off, and could be competing for a third place position in their group.