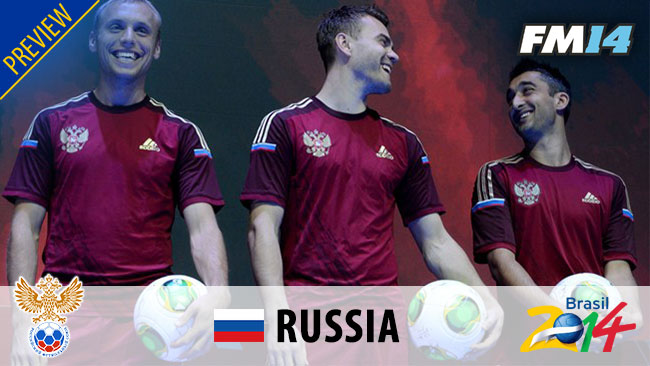 In preparation for their maiden voyage as World Cup hosts in 2018, Russia successfully qualified for this year's tournament, which will be their first World Cup appearance in over a decade.

Although largely going unnoticed throughout a gruelling qualifying campaign where they narrowly pipped Portugal to top spot, Russia are many people's dark horses for the tournament, and have been drawn in Group H alongside Algeria, Belgium and South Korea.

In their two previous World Cup appearances since the dissolution of the Soviet Union, Russia have failed to find a route out of the group stages, but they will be hoping to better that dismal record during this tournament, in one of the most unpredictable groups of them all.

The European Championships have regularly been a much happier hunting ground for the Russians, so they will certainly not fear the prospect of competing against fellow qualifying group winners Belgium, who have been hotly tipped to succeed. And, with two European U-17 Championships to their name, including most recently just last year, the future looks very bright for the world's largest country.

Hailing from the same country that produced legendary shot-stopper Lev Yashin, Igor Akinfeev has had some very big boots to fill. However, having been at CSKA Moscow since the age of five, Igor has steadily established himself as one of the best goalkeepers outside of the world's very top leagues and will need to perform to the very best of his ability if Russia are to make it out of the group stages for the first time. If you're still pondering over who to start in goal for your personal world cup fantasy teams, Akinfeev would be a very safe bet indeed. 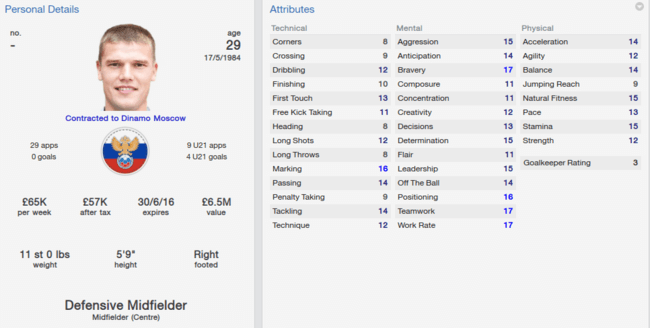 Much like English players, Russian footballers rarely venture outside of their home nation's leagues, and Igor Denisov is no different. Having previously spent his entire career establishing himself at Zenit, Igor was finally persuaded to leave by high-spending Anzhi Makhachkala, but moved on to Dinamo Moscow just a few games later once Anzhi's off-the-field problems worsened. Denisov will have high ambitions of his own, and will hope to become the first Russian captain to steer his team to the World Cup knockout stages at this tournament.

Everyone in Russia's current roster will dream of playing at their home World Cup, but for some the dream is much less realistic than others. Aleksandr Kerzhakov, currently 31 years of age, is one of those players who may well retire before the Russian showpiece of four years' time. Nevertheless, in what may well be his last World Cup, Kerzhakov poses one of Russia's greatest attacking threats. A prolific goalscorer in the Russian Premier League since the turn of the century, Aleksandr enjoyed a much less fruitful spell during a rare Russian venture outside of the league system while at Sevilla, but with a goalscoring record for his country of almost a goal a game, few can doubt his prowess in front of goal.

One of Russia's biggest current prospects, Alan Dzagoev broke onto the international scene at Euro 2012, where his creative performances wowed and excited fans of Russia and all other nations. Although initially linked with a move to a number of top European clubs, Dzagoev opted to continue his development at current club CSKA Moscow, whom he joined in 2008. Whether he is to repeat his 2012 heroics or not, unlike most of his teammates there are plenty more major tournaments around the corner for Alan, and from here he can only continue to improve. 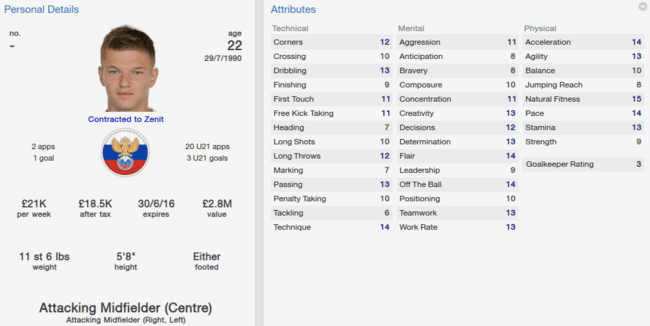 Another exciting, talented attacking midfielder (and I promise you I didn't just include him for the name), Oleg Shatov is definitely one to watch at this World Cup, his first major tournament. With bags of skill and excellent dribbling in his back pocket, the Zenit St Petersburg man is capable of having a decisive influence on the game, either from the start or as an impact sub. Although the hefty price tag he commanded for Zenit was originally in doubt, Shatov's fine performances alongside household names like Hulk and Danny has won him a place in the final squad for this tournament.

Not since the days of the daleks has a being made Englishmen cower behind their seats like Fabio Capello. Both a playing and managing legend in his native Italy, Fabio has a decorated CV that would make even José Mourinho drool. Having previously ventured into international management with the aforementioned England, Russia was an entirely new challenge for Capello when he took over in 2012. However, having safely led his players through qualifying, Fabio has settled into the role quickly, and, love him or hate him, there is no better man than Fabio Capello to lead you to your first ever knockout stage.

Belgium may have some oustanding players at their disposal, but their lack of tournament experience leaves the door wide open for Russia to sneak into first place. On paper the group is simply too close to call, but with a team and manager as experienced as Fabio's men are, and the inclusion of fresh, young talents like Dzagoev, Shatov and others, Russia should safely qualify from Group H, but will undoubtedly struggle once they reach a historic first Round of 16 at the World Cup.

Now, this is a story all about how
My life got flipped-turned upside down
And I'd like to take a minute
Just sit right there
I'll tell you how I became the prince of a town called FM Scout