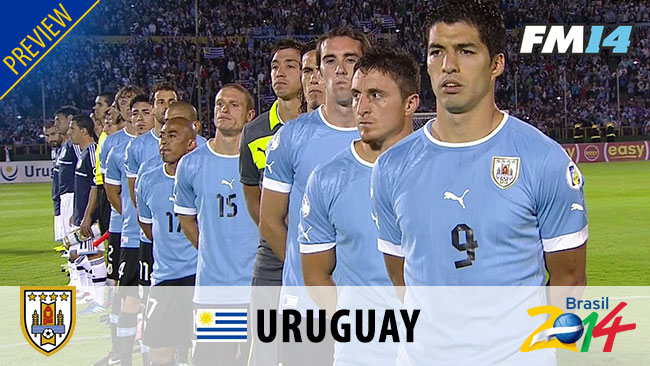 The Uruguay team is built on the foundations of the successful 2010 World Cup campaign, with the added bonus of Luis Suarez coming into his absolute prime. Always positive, gaffer Oscar Tabarez is convinced that this squad didn’t need fresh blood. Diego Lugano is still captain, Arevalo Rios is still his midfield general and Diego Forlan is still reliable in attack, thanks to his wonderful free-kicks.

The recipe won’t change much from last time: Uruguay will bet on solid defending, won’t be desperate for possession, and will bide their time and attack space. The more markers Suarez attracts, the more room Cavani & Co. will find.

Although Uruguay's World Cup successes come very far back into the past, they do have a good history in the tournament after winning it twice, in 1930, the first ever World Cup and Uruguay hosted and 1950, coincidentally when Brazil hosted it for the first time. On top of two World Cup's they've won the Copa América a mighty 15 times.

Uruguay have arguably the best strikeforce going into the World Cup this year with Cavani and Suarez leading the way with Forlan as the back up.

The man from Salto is going into the World Cup off the back of the best season of his career at Liverpool in the Premier League. He finished the season without a Premier League trophy but with 31 goals and the Golden Boot after leaving his strike partner Daniel Sturridge 10 goals behind him in 2nd place in the top scorers list. He will be the heart of Uruguay's attack this World Cup.

Suárez's partner in crime for this World Cup. He signed for Ligue 1 rich kids Paris Saint-Germain for a jawdropping €64 million in August 2013, and alongside the Swede Zlatan Ibrahimovic, scored 16 goals in 30 matches finishing as one of the top scorers in Ligue 1. Him and Suárez will be a deadly partnership this Summer.

While Suárez and Cavani are bullying opposition defenders, Uruguay need a man to keep it steady at the back and Godín is definitely the man to do so. Godín was an integral part of Atlético Madrid's Champions League adventure this season so Uruguay will be heavily relying on Godín to keep is safe defensively.

Hiding behind Suárez and Cavani's array of talents are some hidden gems in the Uruguay squad. Lets take a look.

After impressing Inter boss Walter Mazzari, Gargano has been playing just in front of the defence this season and has been a shining light in what has been another poor season for Inter. Gargano is regarded as aggressive to Serie A fans and that sort of bite in the middle of the park is maybe what Uruguay need for this World Cup.

Ríos was Uruguay's star player in midfield in the 2010 World Cup held in South Africa. Because Uruguay's best players play in Europe, Ríos sneaks under the radar in terms of ability after spending all his career apart from a one year spell in Palermo, outside Europe. Like Gargano, Ríos is a reasonably aggressive player but knows how to get the team ticking.

Tabárez hasn't had the most influential playing careers ever, spending most of his time in Uruguay's top league which, lets face it, isn't the best. But his CV in management is very good after having two spells at Boca Juniors, the top dogs in Argentina, two spells at Serie A's Cagliari, a short time at Vélez and five unsuccessful months at A.C. Milan. On top of this, this is Tabárez's second spell at Uruguay having previously managed them for two years between 1988 and 1990.

Uruguay have been placed in a tough group with England, Italy and Costa Rica who may use the underdog label to their advantage to shock everyone. If Uruguay could get their forwards scoring they could breeze through Group D. Uruguay are tournament-savvy and Luis Suárez is in the form of his life. Surely they can't "do a 1950" again, can they? 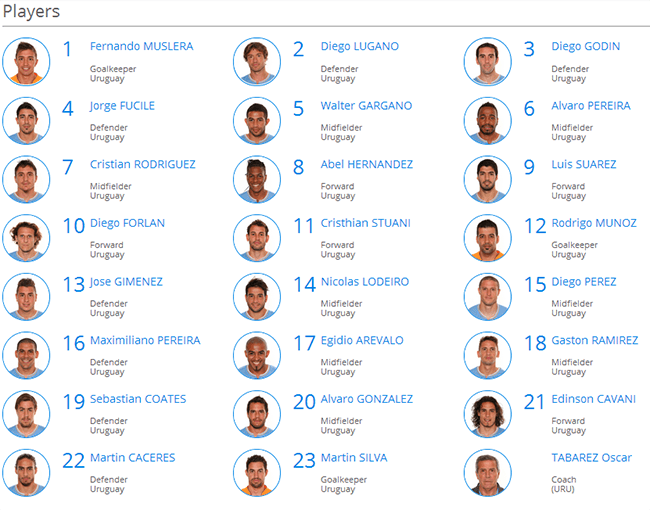