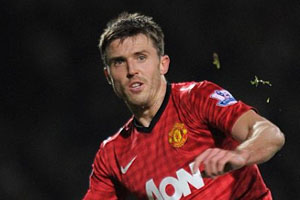 Manchester United stormed to the league title this season. They finished the league in a canter breezing towards a 20th league title with an 11 point lead over second place rivals Manchester City. But despite winning the league so comfortably United are crying out for a top quality central midfielder that can pass and can score. United have a great ‘deep-lying’ playmaker in Michael Carrick but the one thing he does not bring to the field is goal scoring. United are severely missing a goal scoring midfielder which all other top quality sides that compete for the Champions League have. Barcelona have Fabregas, Bayern Munich have Muller, Real Madrid have Ozil and Modric and Dortmund had Gotze this season Manchester United do not have a goal scoring midfielder so our strikers in Van Persie, Wayne Rooney, Hernandez and Welbeck have been under huge pressure to score nearly all of our goals this season in all competitions. As it showed in the league without a goal scoring midfielder it is possible to win the league but for the last two seasons United have struggled evidently in the Champions League with us not even qualifying in for the knockout stages last season. But who does United really need in their central midfield that can improve their side enough to give them a chance to win the Champions League? It all depends on whether we as fans demand instant Champions League success or whether we want to give it a few years so we can really attempt to dominate Europe. Depending on what fans want depend on what player we should buy this summer.

When it comes to short term there is only really one realistic option and even then he is still never likely to come to Manchester United. This player is Fabregas. There have been persistent rumours that he is not happy at Barcelona despite him pushing so hard just two seasons ago to leave Arsenal to go to Barcelona. But his short stint at the club he has many times stated to love has not been the honeymoon he expected. His first season with Barcelona ended with no silverware and he was not a vital first teamer like he wanted to be. In his second season he finally won a trophy with Barcelona but still was not a vital part of the team with him being subbed on many occasions which has reportedly left him unhappy with his role. I myself do not see this transfer happening but he is exactly what we need in a midfielder. He can pass, score and dribble with the ball everything we need. But I cannot see this happening this summer of any other summer because even if he does want to leave Barcelona the only team he would like to join is Arsenal and he is the sort of player that would not go to his old teams rivals. So this deal is a no go in my view.

Now the more realistic and longer term options. United have been linked with Kevin Strootman, Fellaini, and Thiago another Barcelona player. All these players are solid choiced but can any of them help us towards a Champions League title? In my opinion two can one can’t.

Kevin Strootman has had a good year for PSV this season and has been a vital part of Netherlands under 21 side that is dominating so far in the Under 21 Championship. He has shown that he can create calm in any game no matter how fast paced the game is. He can help a team retain possession in any situation regardless of pressure from opposition players. He is also a very good passer of the ball I was watching the Netherlands vs. Germany match in the Under 21 Championship the amount of top quality passes he was able to pick out was superb. But I like the most about Strootman is how he can also score. We are in desperate need for a midfielder who can score and Strootman has proven he is a good finisher as midfielders go. I would really like us to get Strootman and he could help us go a long way in the Champions League in a few seasons.


Another one of our targets is Thiago Alcântara. A very talented central attacking midfielder who currently plays for Barcelona. Supposedly Thiago is unhappy with not playing much after being put behind Xavi, Fabregas, Busquets and occasionally Iniesta who usually plays on the left wing but can go back to his original position of central midfield. The current rumors are that United have bid £15 million for Thiago. He would be a sensational signing for United. A young, pacey central midfielder who is very good at passing and also as central midfielders go he is a very good finisher. United need a goal scoring midfielder more than anything else for one major reason. The old style midfielders that many United fans think we need such as Keane no longer exist. The closest we have to that style of midfielder is Yaya Toure but even he is a lot more attacking than he is defending. So the old fashioned hard hitting central midfielders are no longer around today. So a goal scoring midfielder is a must. Thiago can offer that for United. He would be a very good buy but like the Fabregas rumor it is not very likely.

Marouane Fellaini is a midfielder that many teams have been linked with over the last three seasons. Marouane Fellaini is a very tall central midfielder who is next to unstoppable in the air. He is very good at using what type of player he is to his and his team’s advantage. He is big, strong, good in the air and a very hard worker. But he is not the sort of midfielder United need to help them towards a potential Champions League and more domestic titles. He is a very good midfielder but he is more suited to a team like Chelsea who escpecially now Mourinho is back who likes to play with two midfielders playing deeper to allow three midfielders and a striker free reign up front. He would be a perfect fit for Chelsea but not what United need what so ever.

Out of these three players I think Strootman and Thiago would both be great signings. With only one of them likely to happen I would honestly like to see United sign Strootman instead due to his all-round ability.

But whatever route Moyes decides to take he needs to make sure he improves our central midfield.