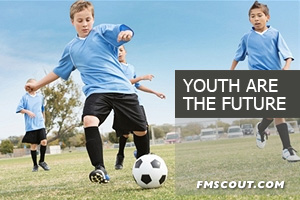 Stop and think, what is your youth academy doing for you? What would you prefer?
I am going to assume you want a few homegrown players for the next generation: to save money on transfers and help fill quotas

Ok, and a cash generating machine. How? Buy youth early when they are cheap, develop them quick, sell them as soon as they have developed into somewhat decent footballers... then negotiate with your boardroom to improve your managers' wage contract

It is just that developing youth (quickly or not) is the tricky part and this is what this guide focuses on. So read on!

Every player has a CA (current ability) and a PA (potential ability) rating.

The CA rating is a rough reflection of how good a player currently is in their best position. The rating you will see is determined by:

You could think of PA as simply being a pool of points that can be spent as a player develops to increase CA. PA is a set limit to how far a player can develop.

You can still maximise a player's star rating for their role if you don't waste any of the pool of PA points to develop a player (ie: use "training focus"). For example, suppose you have a young fullback with: you could retrain the player to be a four star Anchorman/Defensive Mid (breaking down attacks with good tacking and positioning). Thus your player's poor attacking stats are ignored. For more information about stats needed for positions, see my other guide "Key attributes".

What determines the pace of a player's growth


Example: a 17 year old " model professional" player, with the potential to become a superstar, training at a start of the art youth facilities, with 5star coaching - will develop remarkably quick. 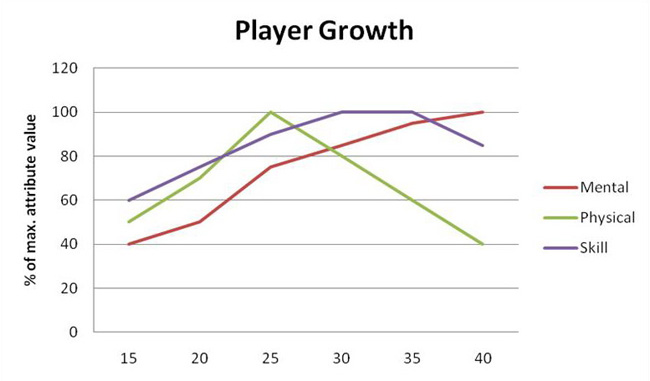 What this graph shows us:

To make some serious money, you should focus on optimizing:

How do you mentor?

Talk to a player, in the development menu choose "tutor":

Mentor - The player that you want to teach with
- be 23/24 or older (except for the captain, but the captain must be older than the player to be mentored)
- have a high reputation
- have at least awkard competency in a position that the Mentoree is Natural or Accomplished in
- not be undergoing Player Preferred Move training
- Squad status: higher than the Mentoree

Mentoree: The player you want to learn from a senior player
- be 21 years old or younger ;
- have a low reputation;
- Squad status: squad rotation or lower

How does mentoring work?

It is complicated. The short answer is: These two points are very good/excellant. The next two points can be good/useful.
If you are not careful choosing your mentor, the mentor and the mentoree may become each other's enemy. This is bad and eventually you will find that you have to sell one of them off.

Balanced – The player has a well-rounded personality that does not fit one of the above specific descriptions.

Born Leader – The player has top Influence and Determination

Casual – The player has very poor Professionalism and poor Determination.

Confrontational – The player has poor Sportsmanship and Temperment.

Driven / Determined / Fairly Determined – the player has very good Determination and a fair level of ambition.

Evasive – The player has good Pressure and Professionalism.

Iron Willed – The player has top Pressure and good Determination

Jovial – The player has good Pressure, a fair level of Temperament, but poor Professionalism.

Leader – The player has top Influence

Light Hearted – The player has good Pressure and Sportsmanship and a fair level of Determination and Temperament.

Outspoken –The player has high Controversy.

Perfectionist – The player has very good Ambition, Determination and Professionalism but poor Temperament.

Reserved – The player has very low Controversy and good Professionalism.

Resilient – The player has very good Pressure and good Determination.

Resolute – The player has very good Professionalism and Determination

Slack – The player has no Professionalism and poor Determination.

Spineless – The player has no Pressure and poor Determination.

Spirited – The player has good Pressure, Professionalism and a fair level of Temperament.

Unambitious – The player has very poor Ambition but a fair level of Loyalty.

Unflappable – The player has good Pressure and good Temperament.

Unsporting / Realist – The player has very poor Sportsmanship and a fair level of Determination.

Volatile – The player has poor Temperament

Loan, Transfer or Door? It is a very complicated answer, and this is what makes Football Manager fun

Essentially it is "when could i make a profit from this player" whether sooner or later. If no money is likely, (ex)terminate ASAP. Otherwise, it is a waiting game to see when you should sell.

Where do you play youth?

As a rule of thumb:
I generally play my entire youth team as my reserve team ("make available for reserves") and play them in my first team or as regulars on a loan team whenever i can..


Feeder clubs? They make it more likely your youth will be accepted as a loanee. Personally I don't bother. To send a player to a feeder club, go to squad status and then "send to feeder club". Afterwards, go to your transfer screen and check to see if their squad status in the feeder team is acceptable to you. If not, CANCEL the deal (cancel anytime)!

BEFORE YOU ACCEPT ANY LOAN OFFER!

After you recieve a message in your inbox notifying you that you have recieved a loan offer (ignore the inbox message) - go to your transfers screen!


Check the actual loan offer in the transfer screen!

Check the SQUAD STATUS of the loan offer

Check to see if your loan will be as a "valuable first team member" or "cover for the first team". Then you can decide if sending the player on loan is a good idea or not

Also, be careful of your Director of Youth Development - paritcularly in the lower leagues:

Double check ALL transfers - if you let your Director of Youth Development handle loans and transfer of your youth, they can make some pretty stupid decisions sometimes. CANCEL their stupid transfers!

Scouting: where do I find these youth?

Answer: In youth teams! But seriously, anyway you can. It just depends how much time YOU want to spend looking. Here are some tips:


I created some notes on the following screenshot to give you an idea what to look for when you check youth players - click the picture to expand it : 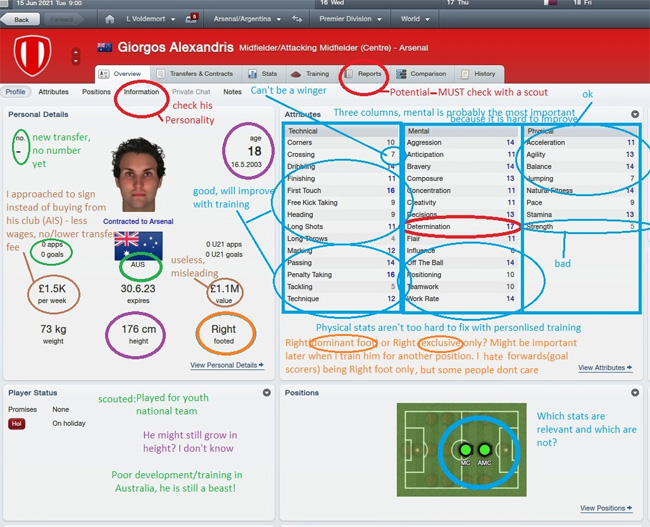 NB - this regen will become a star

Do you see the players with the stupid CG faces? (example: see above player) They are "regens" - randomly* generated youth players created to replace/refresh the database of players.

*NB: Regens are randomly generated, but ... there are some factors which strongly influence the standard of quality of the regens (CA and PA):


Where are the regens created?

Regens first appear as trialists at all of the club teams that have youth acadamies. A seperate "trialist" team will appear in the list of squads that a club has on the date of respective country's regen date. This trialist team has not yet joined the club they are trialing for.

A day or more later, depending on the club & league, there will be a trial day event (In real life
youth trials will probably go for several weeks). After the trial event, the trialists will be offered youth contracts. Trialists accepted by the club will join the most junior youth team. The rest will be deleted when the trialist squad is deleted from the list of squads

Key dates
Here are a few of the important dates that regens are created on: see below for a full list

Regens will be created on the following dates, you may find your trial day is a day or more later.

Clubs with the best training facilities

Alternately, ask your club's board very nicely to upgrade the club's training facilities.

This guide was written by Steam Community member Conditional Love. He was kind enough to allow us republish this guide here on fmscout.com.

Discussion: Youth are the future