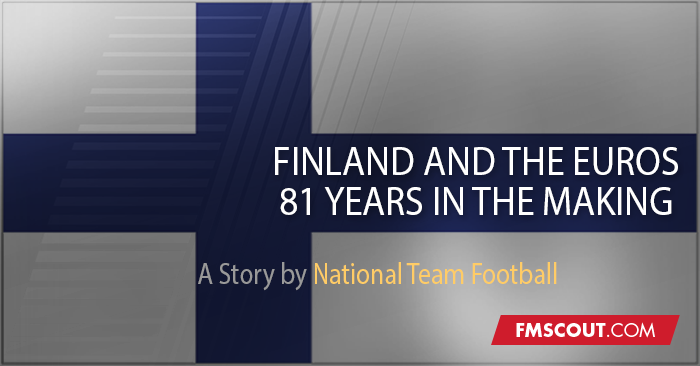 On November 15th 2019, Finland defeated Liechtenstein 3-0. It might seem like an ordinary result, but it was a result that made history as it secured Finland a place in their first ever major tournament. Finland’s first ever qualification attempt was for the 1938 World Cup where they lost against Sweden, Germany and Estonia without scoring a single goal. Since then they have participated in 31 qualifiers for the EUROS and World Cup respectively without qualifying. That was until their qualification campaign for the 2020 Euros. A campaign which saw them winning 6 games and losing 4. But two of those losses were against powerhouse Italy, and they were very respectable losses for Finland. Losing 2-0 away and 1-2 at home after a controversial penalty. Their only true mess up was when they were demolished 4-1 against Bosnia and Herzegovina. They also lost to Greece in their final game, but at that point qualification was already guaranteed so they had nothing to play for.

Finland’s successful qualification truly is sensational. Prior to the 2020 Euros, the only times they even got moderately closed to qualifying for a tournament was the 1980 Euros where they only needed one more point to qualify and the 1998 World Cup where an additional point would’ve granted them a spot in the play-offs. They’ve had a few great players throughout the years - namely Jari Litmanen, Sami Hyypiä, Jussi Jääskeläinen and within recent years, Teemu Pukki - but still they have consistently failed to come together as a team and produce results. Until now. But why did it take so long?

In order to understand the recent success of Finland, we have to go back to the 2018-19 UEFA Nations League season where they won their group containing Hungary, Greece and Estonia. Hungary and Greece may not seem like amazing teams, but as recent as a couple of years ago they are both teams you would expect to defeat Finland. Even though Finland lost to Hungary and Greece 2-0 and 1-0 respectively in the away fixtures, they won 1-0 and 2-0 at home which was enough for them to top the group. Which is what counts.

In a great Reddit post, a user by the name of Valimo explains that the success of Finland is largely due to simple yet efficient tactics and I think he is absolutely right. He breaks down the success into three factors - the players, the national team approach and the coaching approach. Finland’s national team is largely unchanged these last couple of years. Teemu Pukki and his partnership with young Jasse Tuominen of BATE Borisov played a huge role in Finland’s success. This duo paired with Bundesliga goalkeeper Lukas Hradecky and a disiplined and experienced defense is a recipe for success. Which their Nations League campaign proved. But the players are far from everything. As previously stated, Finland’s squad has remained largely the same for a decent amount of time without achieving the same success.
So the national team and coaching approach must also be taken into the picture. National teams don’t share the same luxury of clubs. The luxury of being able to implement new tactics week in and week out. This was notoriously well-proven by the failure of their previous coach Paatelainen between 2011 to 2015. His approach had two major shortcomings: It was based on his personal tactical ideal, rather than player profiles. And a 4-3-2-1 formation is rather specific and players will need a lot of time to adapt to it. Paatelainen tried to get along with the material he had, which didn’t match the formation. So it was doomed to fail. He tried to force players to adapt from the positions they were comfortable in.

This is where their current coach (Markku Kanerva) got it right. His 4-4-2 setup is traditional and easy to adapt. He has built his team from defense, which is natural for a team playing against more skillful opponents. Despite the clear weaknesses on attacking build up, the strategy has been bringing the results needed. Kanerva's approach seems rather comprehensive - or in other words, patient - especially against Greece he emphasized frustrating the more skilled opponent to get them off-balance on the defensive half.
In the modern era the simplistic tactical approach tends to be overlooked due to the heroics of the top clubs in European leagues. However, for the national teams the reality is very different. There is no room for fancy position changes.

Kanerva is a pedagogic coach with positive and team-building orientation Kanerva has emphasized positive atmosphere and social aspects in the team sports. Countries which might not have the best players in the world, the greatest resources, can still compete with the well-functioning group dynamic and great team spirit. In addition to this also Iceland has been a good sample why this matters for smaller countries. Good group dynamics encourage trust - which is absolutely necessary in professional level, as players might want to play, even if they are not at 100%. But when there is trust and willingness to get the best performance for the team, the dialogue gives coach a true understanding on what to expect from each players.

Finally, Kanerva makes players think. Instead of briefing players top-down, he often forms group discussions and group learning strategies to make players also give input and learn. Also players are encouraged to guide one another, very much like in a school class. Other than this, most of his methods are more conventional: Statistical analysis, nutrition experts, fitness surveillance etc. as in all high-level football.

This is a spot on analysis of the success of Finland. So thanks again to u/valmio for allowing to use this information. Only the future will tell what Euro 2020 will bring Finland - if anything. But one thing is certain: Their major tournament debut has been long overdue.

Discussion: 81 Years in the Making for Finland