Difficult start to the season for our managers!


We are reaching October of the second Hot Seat season and our two only employed managers are under-pressure.

Our female member Chloe Kay had to wait until last week for her first win at the head of Falkirk. The club is at the bottom of the Scottish Premier League table and Kay is already under-fire.
Last year, Justin Case and David Beckham also experienced a poor start, respectively at Sparta and Hercules, and the two managers were eventually sacked. This season Beckham is trying to forget his first experience in management, but the former England international is once again facing the prospect of the sack.

He is actually at the head of Zwolle and the club which was predicted third of the Jupiler League at the start of the season is actually siting 10th with two wins out of seven games.

Several hot seat members are announced at clubs around Europe and it is Andreas Esbech who seems to be the closest to getting a job. 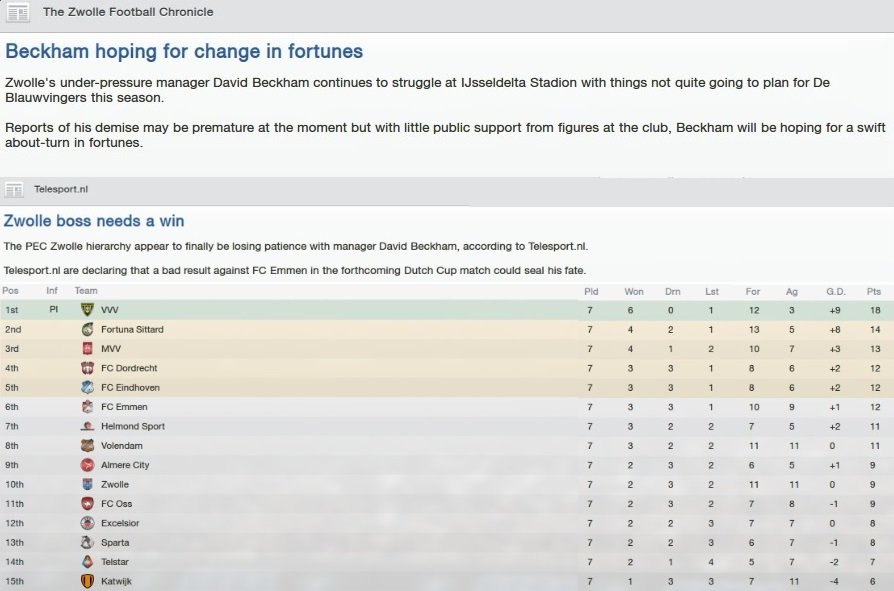 Akash
7 years
Andy and me linked to the same job. This'll be fun!
Login to Quote

I guess it's good that I studied Civil Engineering then...
Login to Quote

OB is actually sitting at the bottom of the table with seven points out of eleven games. Medias prediction at the start of the year are that the club will finish 5th, so Esbech will have a lot of work to do to bring back the club to the top (they finished 4th last season). The new manager declared that he was going to "reshape the club from top to bottom".


For the first time, the Hot Seat reaches a total of four employed manager.
Raphaël Scott is the new manager of French Ligue 2 side: En Avant de Guingamp. The club which was relegated from the top division last season is currently 17th, but Scott had an imediate effect at the club.

Just a few hours after signing his contract, he lead the team to a 3-0 win over Bastia. "We will build on this game to fight back for a spot in the first half of the table, declared Scott. This is where the club deserves to be."


Following Lee Clark sacking, Birmingham are searching for a manager who can bring the club back in the promotion race. And this man should be a Hot Seat member as the club is linked with four of them!

Will it be Matt Wells, Lucas Crosbie, Alonso Smith or Dave Hall? Time to discover!


Several Hot Seat members are linked with clubs all over Europe.

Lucas Crosbie, Dave Hall and Alonso Smith are all linked with Bolton following Freedman sacking. The three managers were dissapointed to see a fellow Hot Seat member get Birmingham's job after being all linked with the club.

Down in Spain, Andoni Etxeberria who didn't find an agreement with Sporting or Reacretivo could join Barcelona! Andoni is the favourite to succeed Eusebio at the head of the B team of one of the biggest club in the World.

Finally Mikhailo Holub is once again linked with a Russian club! Last season he was announced close to join four different Russian Premier League sides including Terek Grozny. One year later, Terek once again sacked their manager and Holub is once again on the list of contenders for the job!


We are three months in the Hot Seat second season, and five members are actually employed. Here is a quick summary of their team results so far!

Wells just joined the Blues in Npower Championship and his career started well with a 2-1 win away at Charlton. Birmingham is currently 18th in the league, four points ahead of the relegations spots.

Scott has joined Guingamp a month ago and his first experience in management is going rather well. On his first day the club was 18th in Ligue 2, and he declared that their place was in the first half of the table. Now "Les Costamoricains" are only one point behind 10th placed Dijon.

Kay mission in Scotland is to save Falkirk from relegation. After 12 games the Scottish First Division champions are last, but it's only on goal difference. Kay had a very difficult start, and the team lost six of their seven first league games but it is now getting better with only one game lost out of their seven last games.

One month after joining the club he loves, Andreas Esbech didn't manage to turn things around. OB lost every game except a cup tie away at third tier side Aarhus Fremad. It was also in this game that they scored their only goal since Esbech joined. The club is 9 points away of the non-relegation spots.

Beckham is the only Hot Seat manager who joined his club before the start of the current season. He arrived at FC Zwolle in March, and wasn't able to save them from Eredivise relegation. But the manager who previously had an unsuccessful spell at Heracles, his finally testing victory (he only won 3 last season). Zwolle are currently battling for promotion (4th in the Jupiler League).

A Hot Seat member at Barcelona!

This morning FC Barcelona revealed that the Hot Seat member was appointed at the head of the Second Division B3 team, takin Eusebio's place. Last season the team was relegated from LIGA Adelante and Etxeberria aim will be to bring they back up.
After Etxeberria first game at the head of the team (a 1-0 win against Cornel), they are 7th, only three points away of the play-off spots.

tbendis
7 years
BENDIŠ KONSTRUKCIJE D.O.O. ANNOUNCES CONTRACT FOR THE STRAITS OF MESSINA
Timmy Ivo Bendiš, 36, announced yesterday that the Balkan construction monopoly had received, arguably, the most coveted contract in construction in the world. At the expenses of 6.1 billion euros, the bridge is said to be the most expensive in Europe at this given time, and will net Bendiš's controversial firm an absurd payday.
Bendiš started studying Civil Engineering in Zagreb, Croatia, before moving to Seattle in the United States to continue his studies. It looked like a promising career for the young engineer, but no one could count on the fact that his brilliance was only matched by his ambition. At 21, he was given his first internship in Monaco, before returning there at 22, and receiving a formal job offer when he graduated a year later. By 25, the Croatian had been promoted to the partner of the firm, where he moved quickly to head the construction of Genoa's new commercial port. The revenue for the small firm was unprecedented, and it grew tenfold overnight. Then, a similar project occurred in Pisa, before the airport in Marseille had to be expanded. The firm grew, and Bendiš only grew in stature within the firm.
The firm had reached its peak two years later, when they were commissioned to build Athletico Madrid's new stadium, but then, a massive scandal forced most of the directing staff to resign, several of whom went to prison. Timmy Ivo Bendiš, 27, assumed control over the largest construction firm in Linguria.
He moved more quickly than most, as if he was born to lead the firm... or if he knew what was going on. Using his connections in Croatia, he bought the three largest firms in the country in one swoop, before using his powerhold to force the rest of the Engineering firms in the country to either merge or fold. By 29, he had spread to the rest of the Balkans, and renamed the firm to it's current eponymous name. Bendiš Konstrukcije became the largest, and only, construction firm on the Balkan peninsula, and controlled all the markets in South East Europe, North Africa and Southern France.
The young executive dodged an assassination attempt at 30, before moving on to grab the contract to save Venice from the Adriatic, along with building the new airport. The Italians were obviously pleased, as, now, 5 years later, and with Venice raised on stilts, they gave him the largest job in Europe.
However, he still is chasing a job in football, which remains elusive, so he decided to buy one. The 35 year old, presented with near unlimited wealth, and a construction firm only rivaled by Bin Ladin Group in Saudi Arabia, has a 100% share in the football club in Messina, ACR Messina Calcio in the 4th Italian league.
Spending time at his massive estate on the hills overlooking Messina and the Tyrrhennian sea, Bendiš spoke with the new manager of the club, Moe Lester, and the new Director of Football, Evil Moderator, about the future, and its beckoning.
Login to Quote

AlexSonwild
7 years
I wasn't expecting this!

You are reading "Can You Sit in the Hot Seat?".