shylax
6 years
(Due to technical issues with my Sasuke FC save, which I believe are caused by the mods, I can't keep that story up, sadly. Thankfully, I already had another story idea in the can.)

July 2, 2009- In a historic deal, the United States Soccer Federation and Canadian Soccer Association have agreed with CONCACAF to revamp their league systems to make them more in line with European-style leagues, including a fall to spring schedule instead of spring to fall, loosening of restrictions on transfers similar to European leagues, and increased levels of play. The US league system has a staggering 5 levels, and Canada has 2. Major League Soccer is no more, in its place is the American Premiership, sponsored by Microsoft. In exchange, CONCACAF has increased the CONCACAF Champions League to 32 teams and have agreed to offer more prize money for the event. The new league system is planned to debut for the 2013-14 league year, so after the 2013 MLS Cup there will be a break until the 2013-2014 Microsoft Premiership season begins in August.

Full details of the revamped system can be read here:
US and Canadian League Details 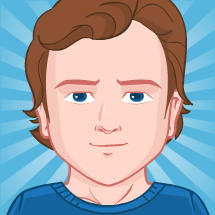 Chattanooga FC have really went out on a limb by hiring 25 year old Shylo Elliott as their manager. Elliott is a graduate of Middle Tennessee State University, but has no playing or managing experience in soccer. He was born in Nashville, which is about 2 hours away from Chattanooga. The club is amateur, but has ambitions (delusions?) of playing in the newly-formed Microsoft Premiership. They said in a press release that they wanted to try something new and thus hired Elliott, although it is a shock move. In order to get to the Microsoft Premiership, Chattanooga FC would have to get promoted four times from the Home Depot National League East, through Chevron League 2 and 1, and the Chevron Championship. "It's a tough task, but I think I can do it," Elliott said.

Chattanooga FC were founded in 2009, the year the announcement of a switch to a promotion/relegation league system was announced.

(Unlike my other stories, this manager is a real person, despite the pickaface. It's me!)
Login to Quote

Radders2109
6 years
Loving the start of this mate

Looking forward to the rest of the story, keep up the good work!

xXSealeyanoXx
6 years
Good luck mate, great start and very interesting to see how the revamped leagues will play out!
Login to Quote

I walked into the club, and there was mostly a sea of greys, but one man stood out, Greg Hartley, the goalkeeper, who is from England, trained with Manchester City Academy, and played for Georgia Gwinnett collegiate soccer team. Obviously, that last bit and him being in the United States and playing for Chattanooga FC means something went horribly wrong with his development, but he's a fine player at this level and will be the cornerstone of the defense. However, that means I need to get a whole staff and club out of whole cloth. 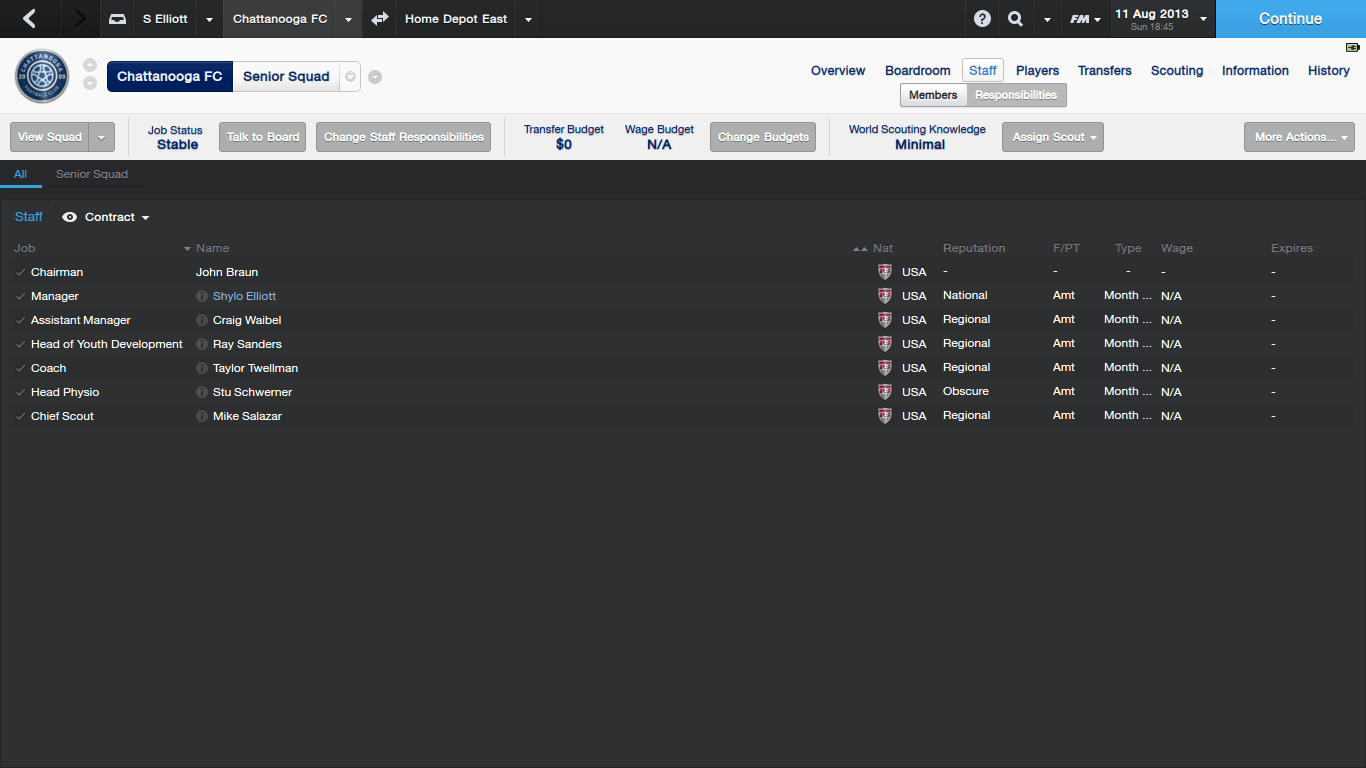 The biggest get is Taylor Twellman, which gives us some international experience in the backroom and (hopefully) keeps his ass off of TV.

I accidentally skipped my only friendly because I accidentally let my ass man have control of friendlies, whoops. However, there is a set of fixtures before the season, the Verizon Trophy tournament, which is basically the Carlsberg trophy of the new US league system. Only teams in the Home Depot National Leagues are eligible to compete. 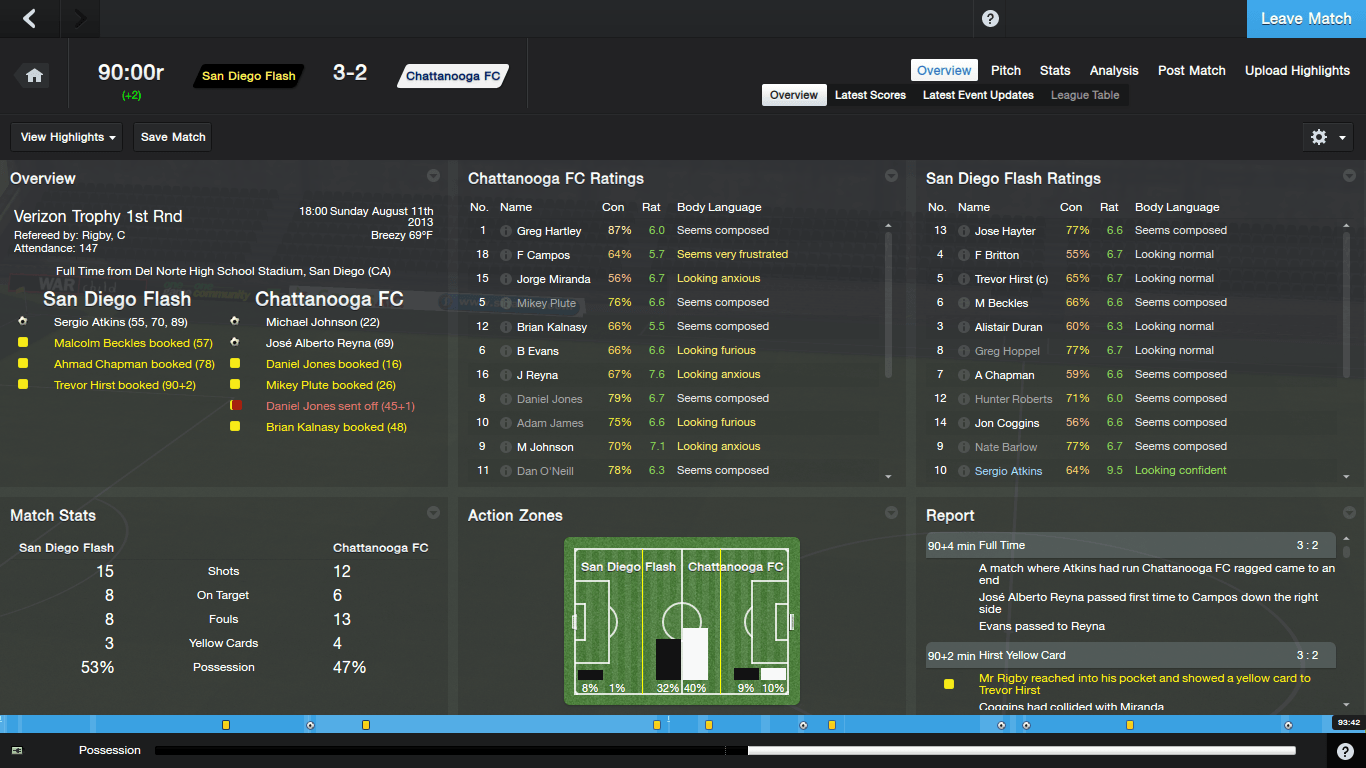 I thought we did well for a first outing, we just got caught in a bad position with Daniel Jones picking up two yellow cards in the first half. Sergio Atkins had a hat trick against us.
Player of the Match: Sergio Atkins (San Diego Flash)

In an interesting bit of news, newly formed New York City FC have made the biggest splash in the transfer market, spending the most money and making the biggest signing, midfielder Will Hughes from Derby for $13.25 million. Foreign-based Americans have also come back to the US, including Garza, Bobby Shou Wood, Steve Cherundolo, and Oguchi Onyewu.
Login to Quote 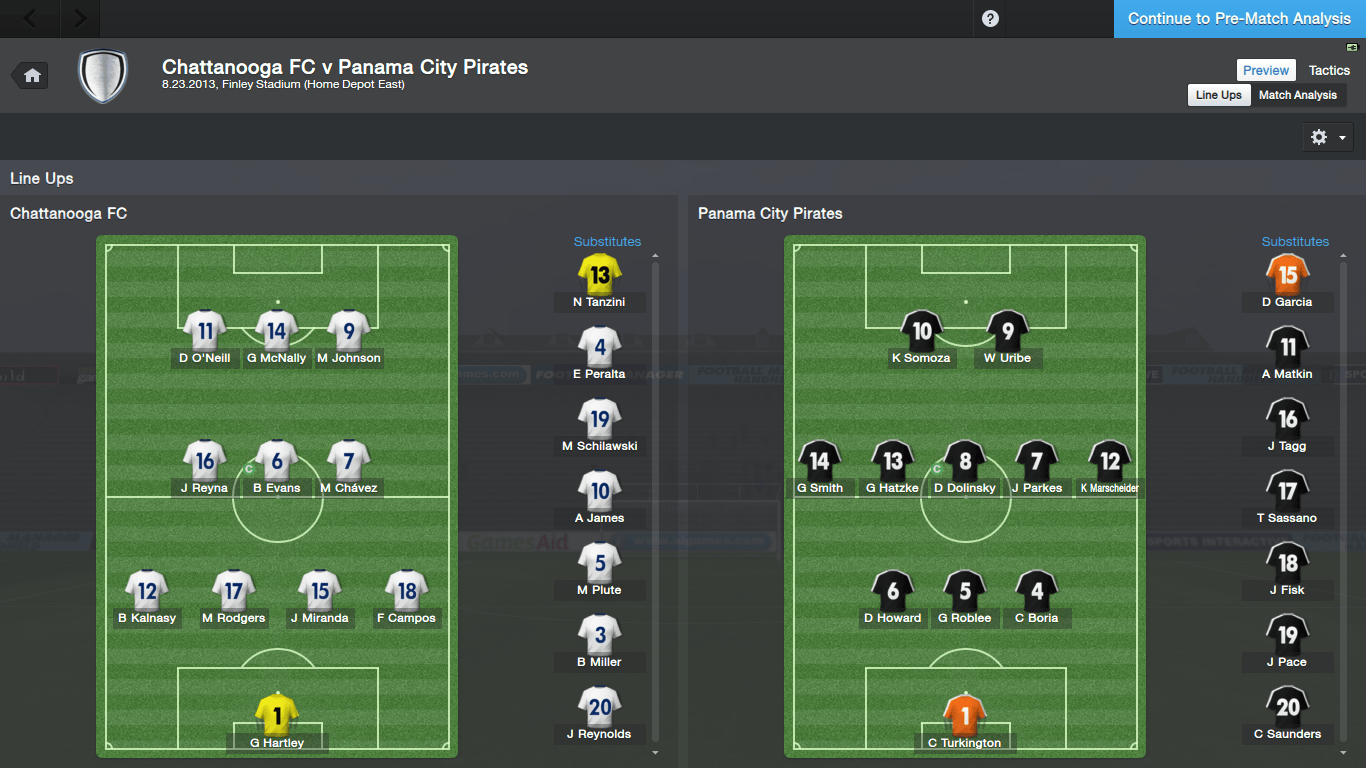 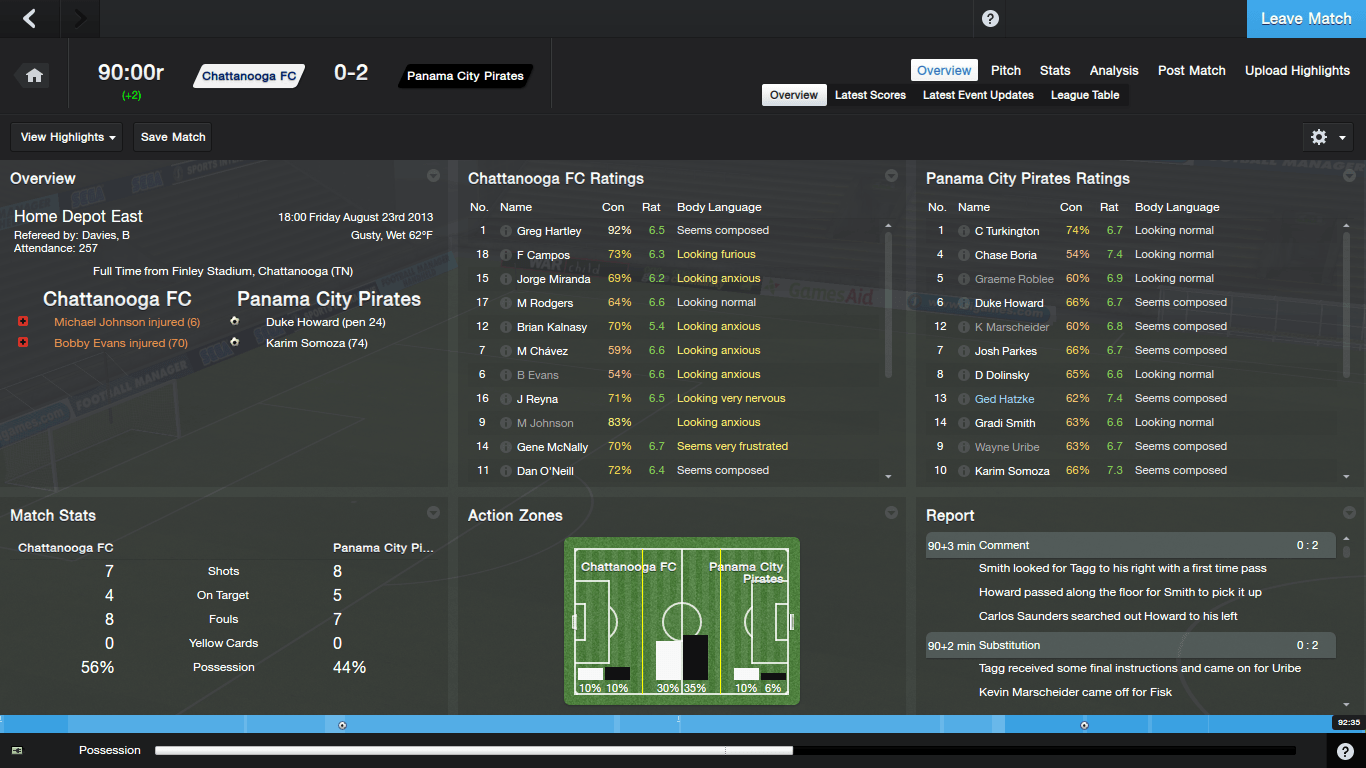 It was a poor start for us, we looked like crap in attack and couldn't defend very well, conceding a penalty.
Player of the Match: Ged Hatzke (Panama City Pirates) 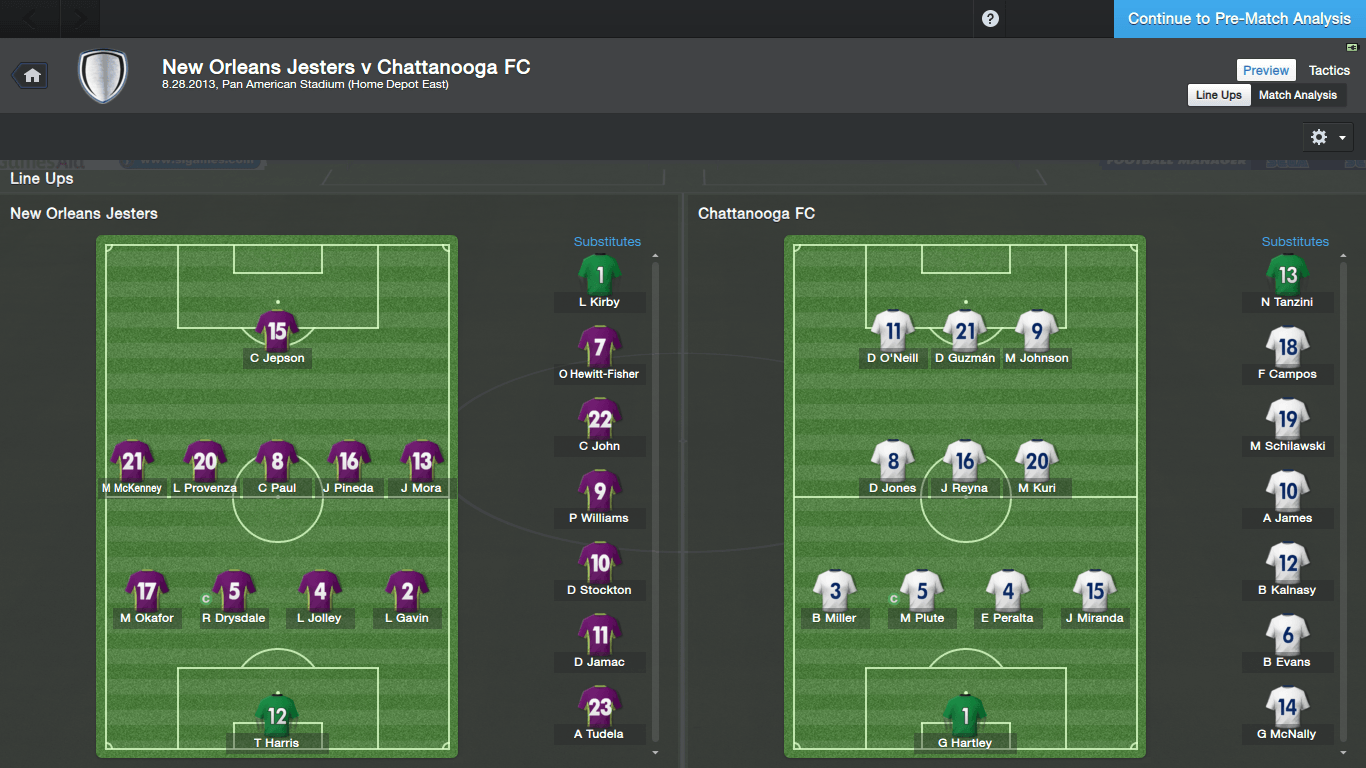 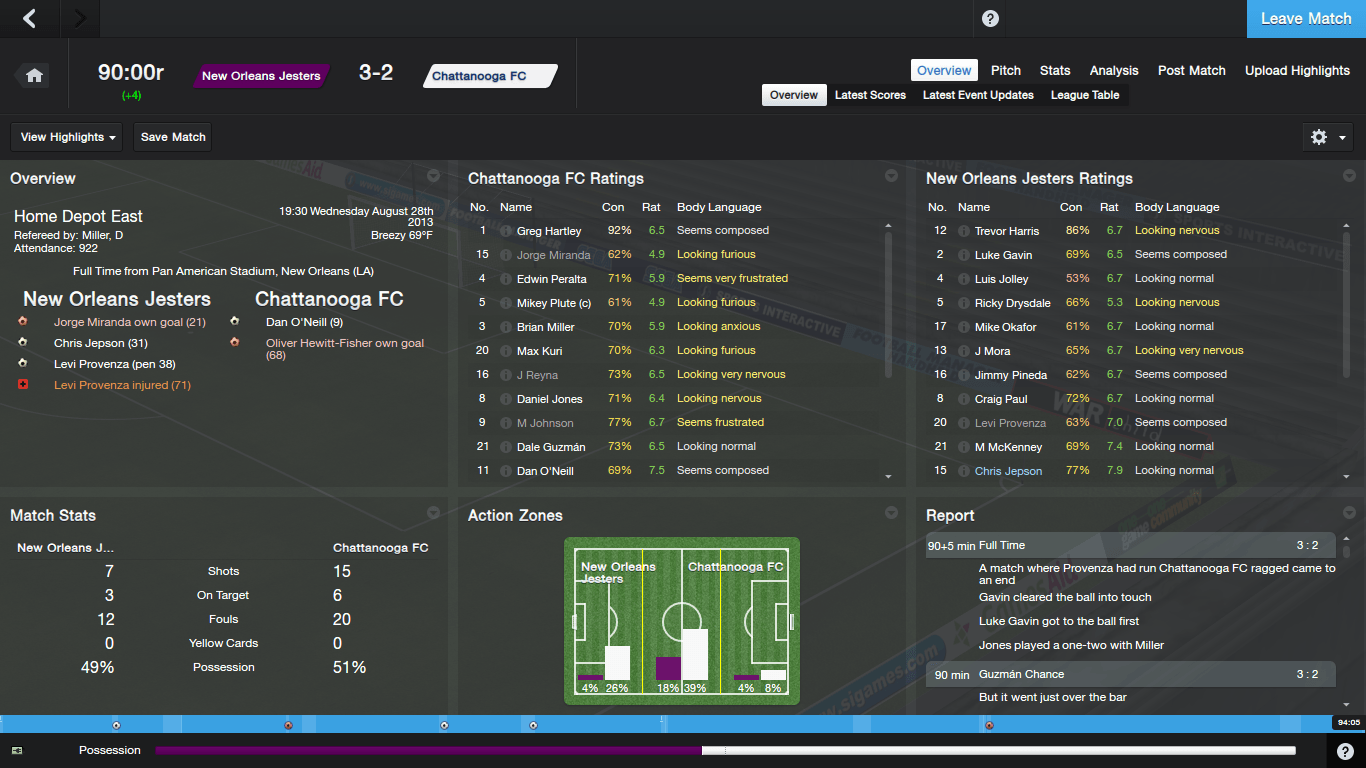 We lost, but this one was much closer. We gave up another penalty call and scored an own goal against ourselves.
Player of the Match: Chris Jepson (New Orleans Jesters) 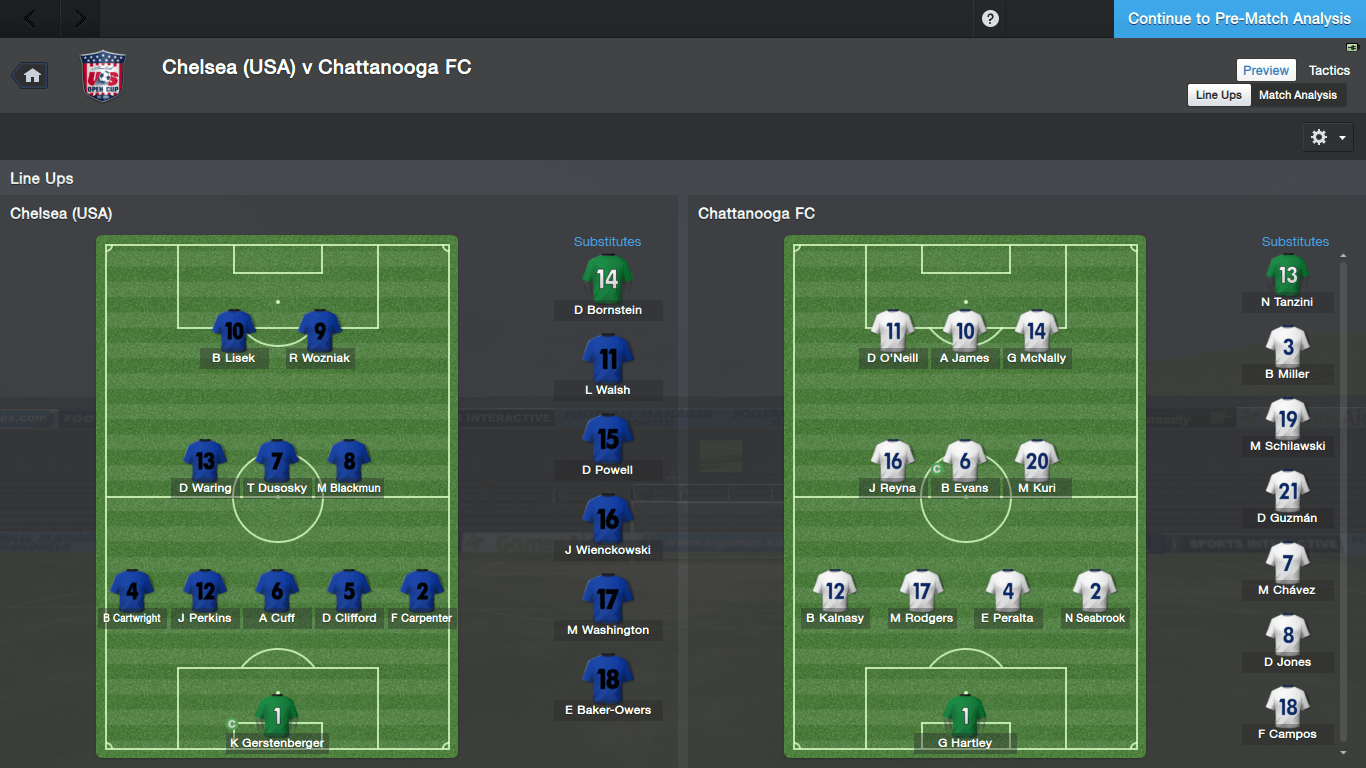 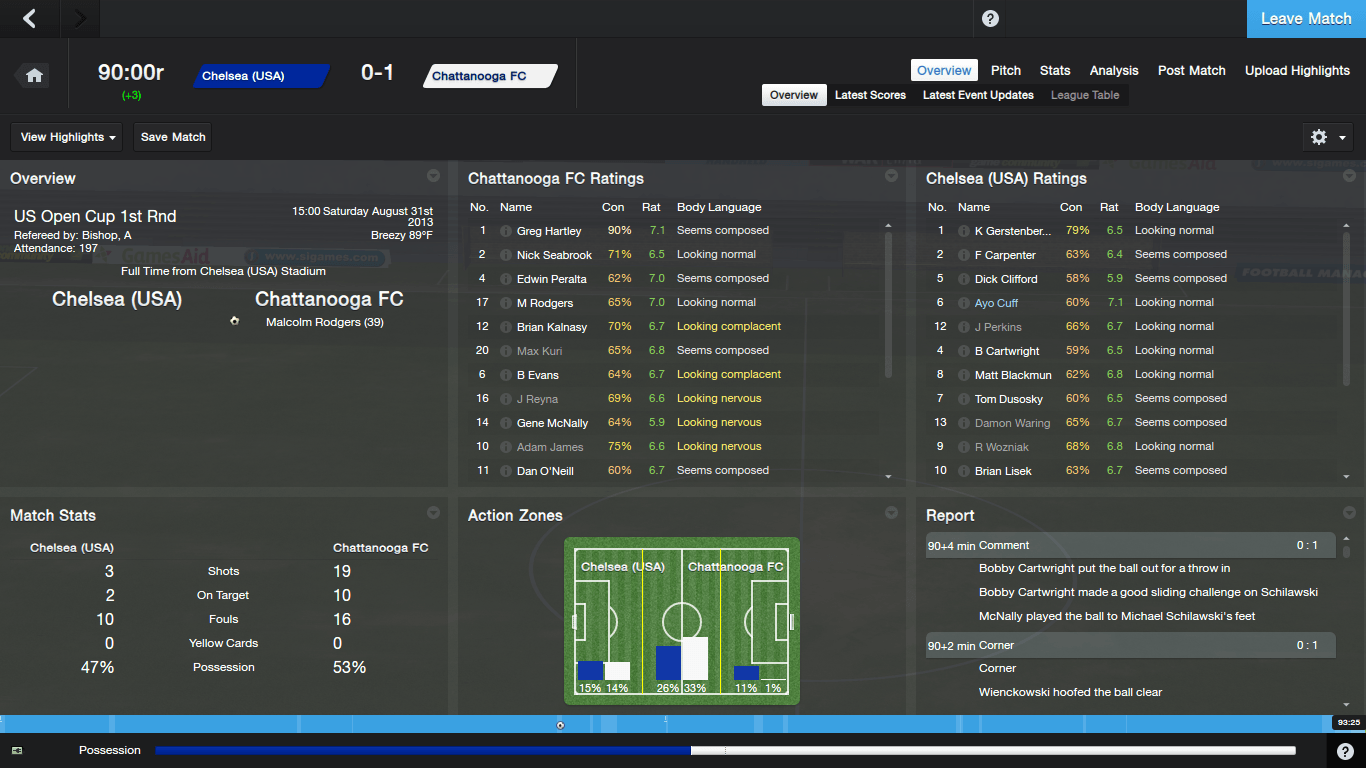 Finally, our first win! Despite our dominance, the scoreline wasn't so dominant, but it's still a win and it got the players all fired up.
Player of the Match: Ayo Cuff (Chelsea USA) 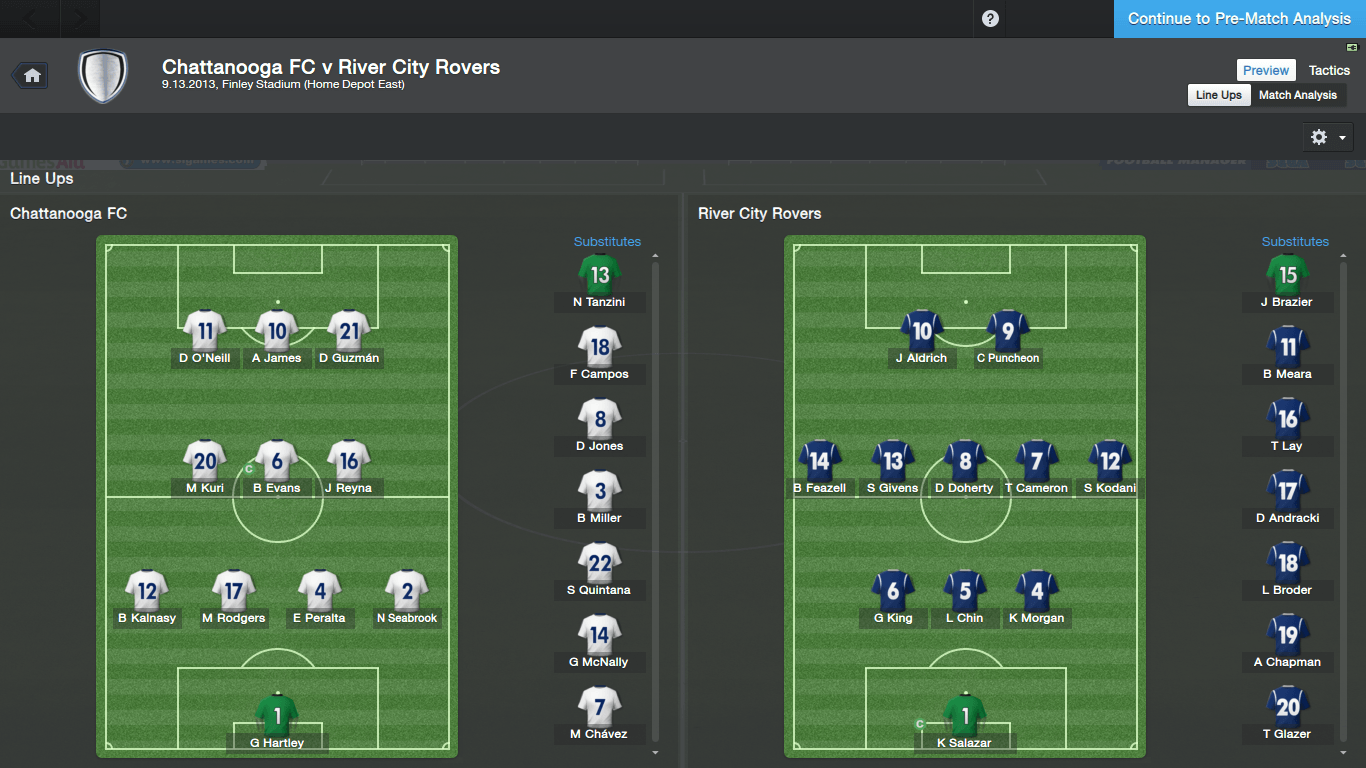 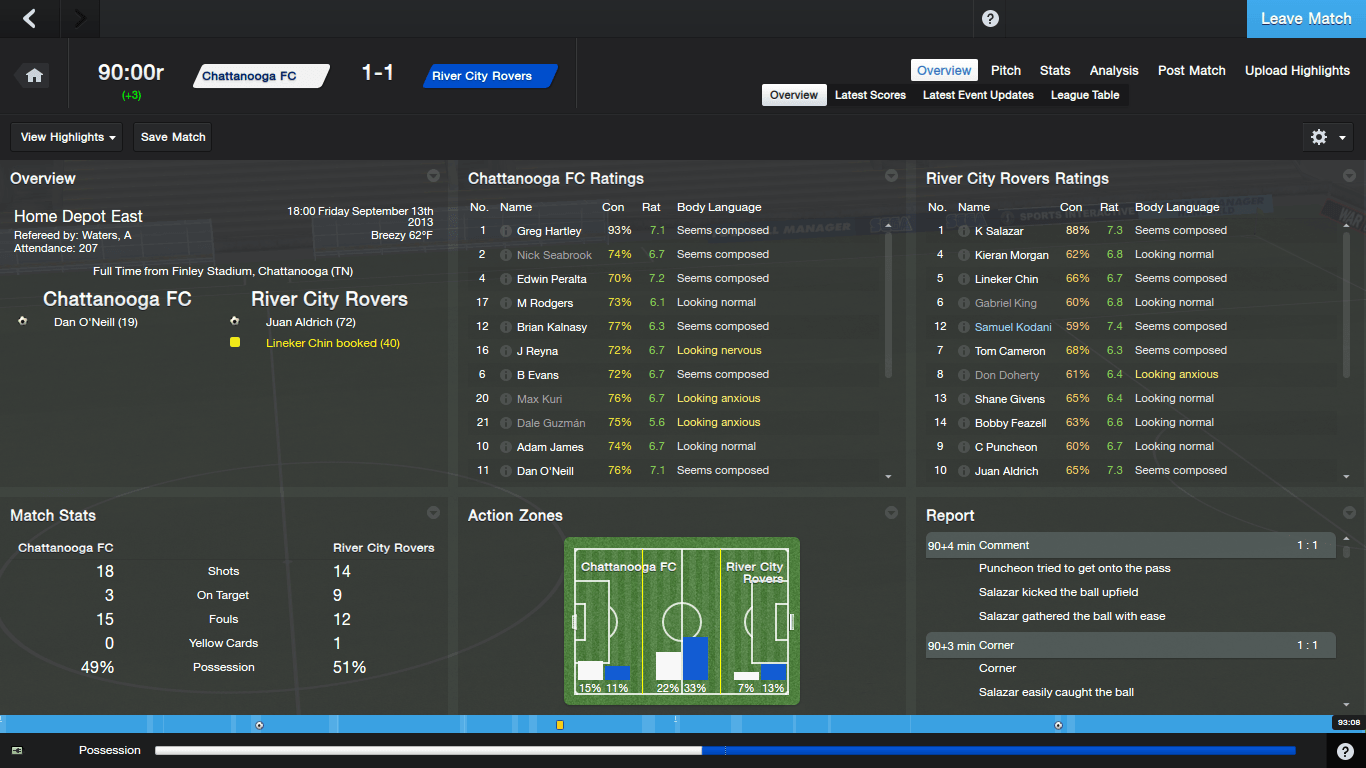 Disappointing, one major defensive lapse turned this from a win to a draw, but we do get a point and a share of the spoils.
Player of the Match: Samuel Kodani (River City Rovers) 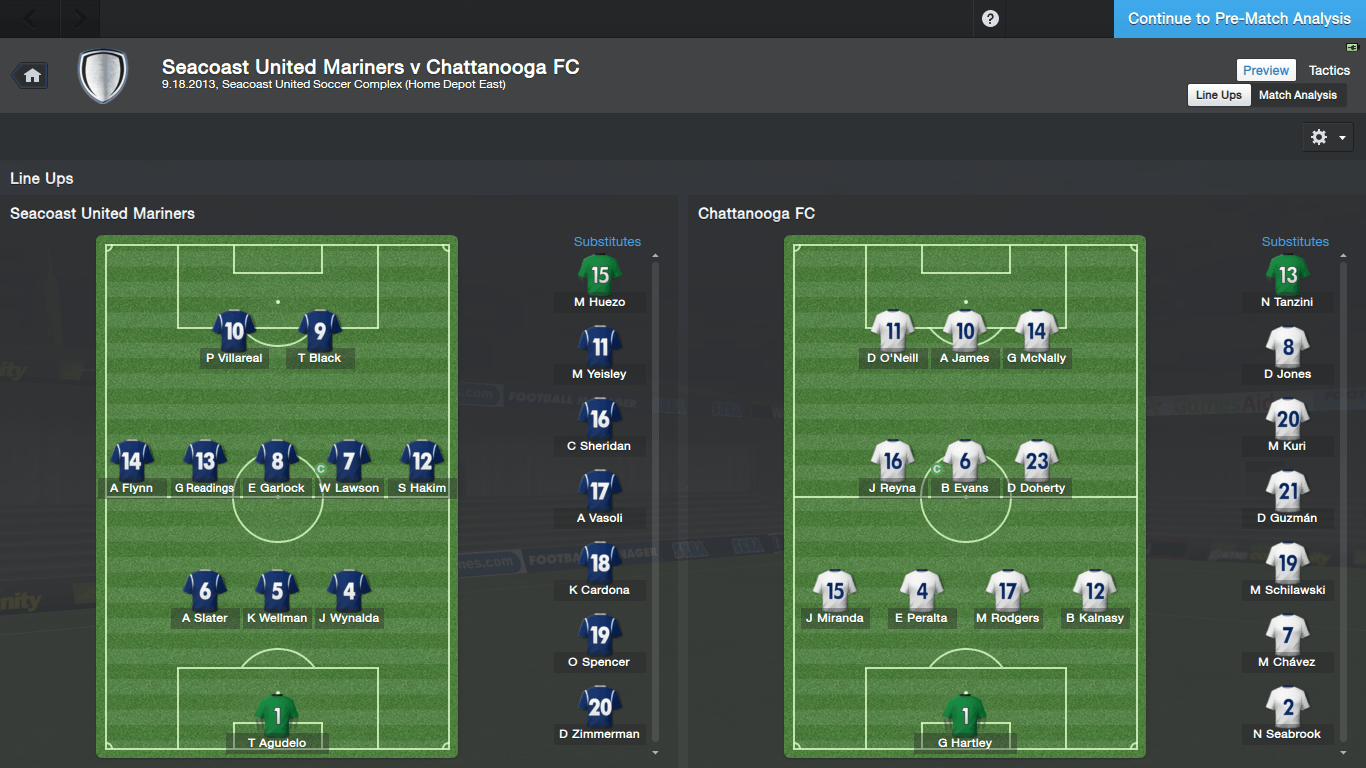 What a barnburner! Even though Chattanooga pulled ahead with early goals and kept firing, Seacoast United wouldn't quit and made this a game until the end. Adam James had a great performance for us with two goals.
Player of the Match: Peter Villareal (Seacoast United Mariners)

Local kid Dan Doherty made his debut in the match and scored a goal in the 9th minute, making an instant impact. Hopefully he has more magic in store for the team! 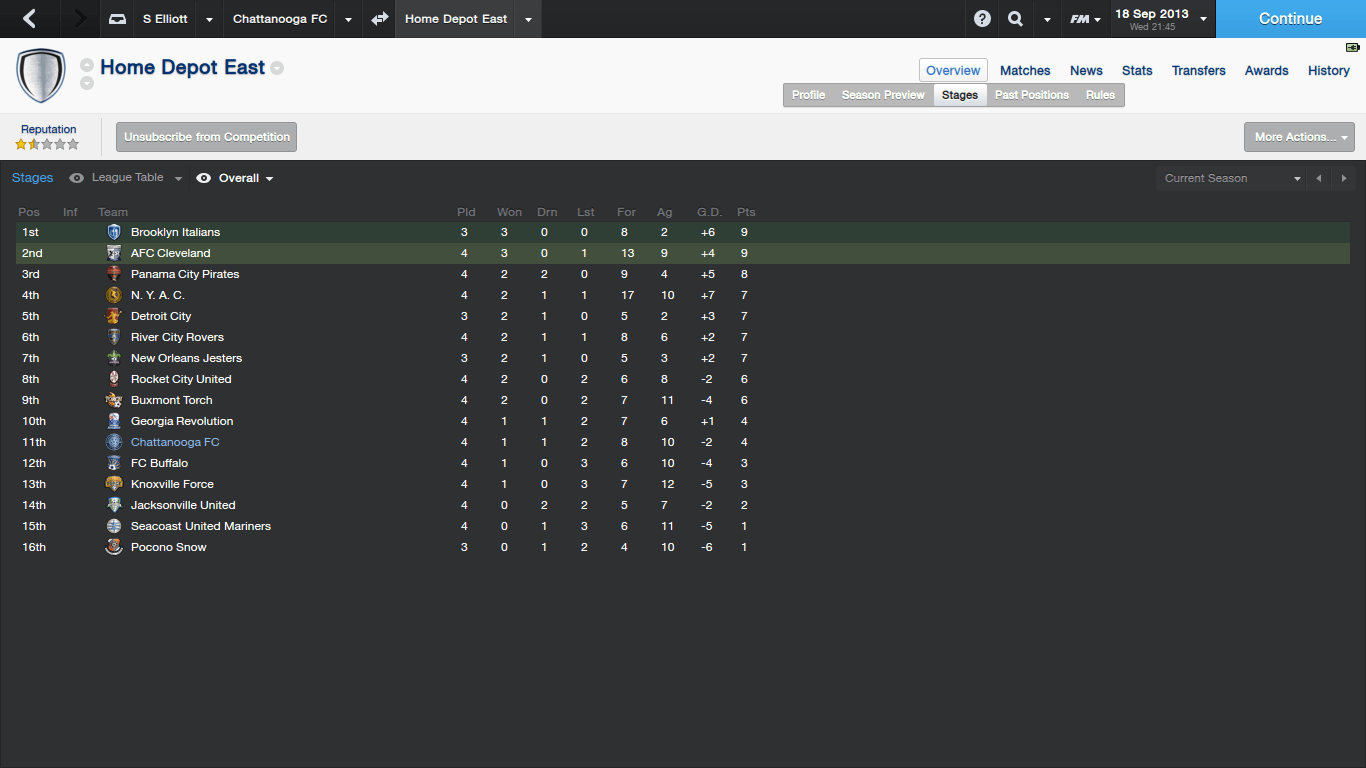 It wasn't the greatest of starts, but I signed too few players for the first team to start with. We're improving, and I think we can go on a winning streak soon, if not now.
Login to Quote 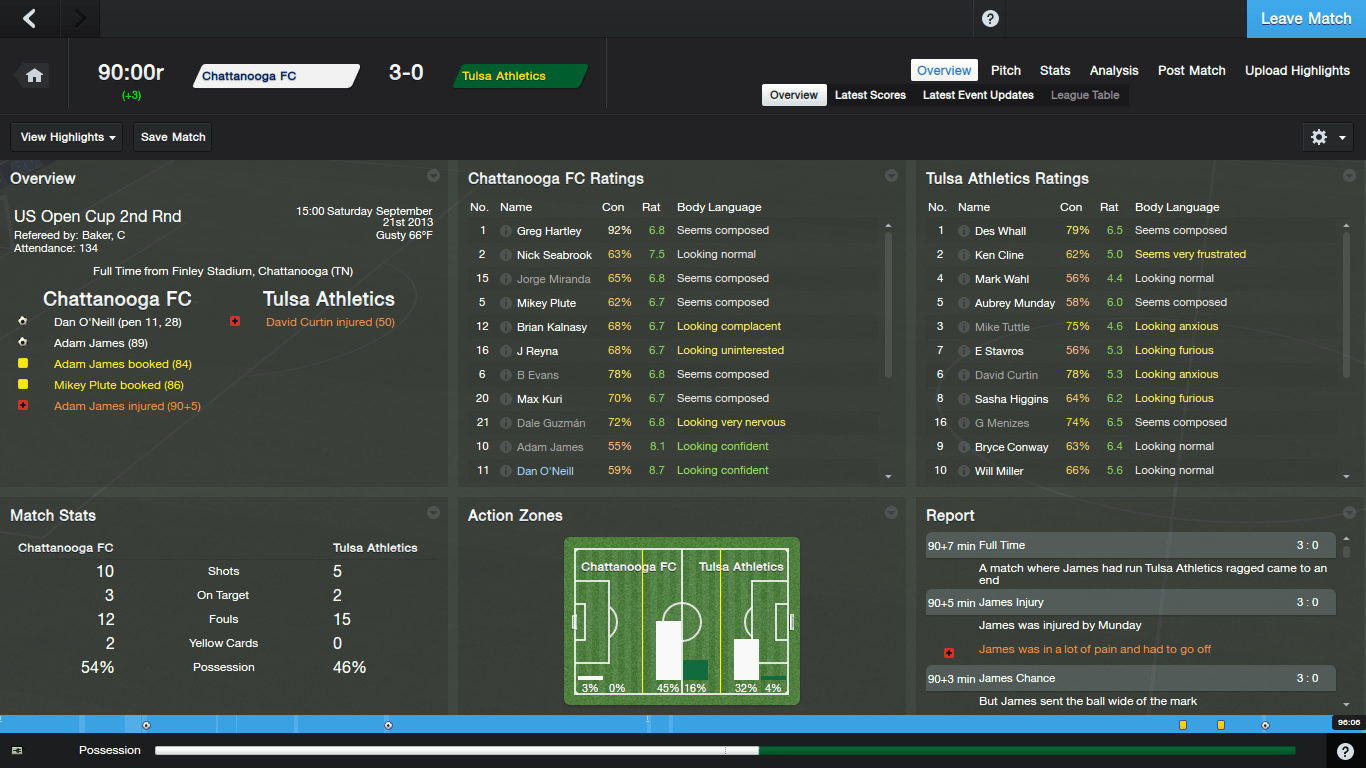 It was never even close. Dan O'Neill quickly scored a brace and Tulsa Athletics struggled to mount an attack. A late goal by Adam James made it 3-0.
Player of the Match: Dan O'Neill (Chattanooga FC)

The match was hell on our strikers though. Adam James will miss about 2 months with strained knee ligaments, and Dale Guzman will be out 4-5 weeks with a twisted ankle. 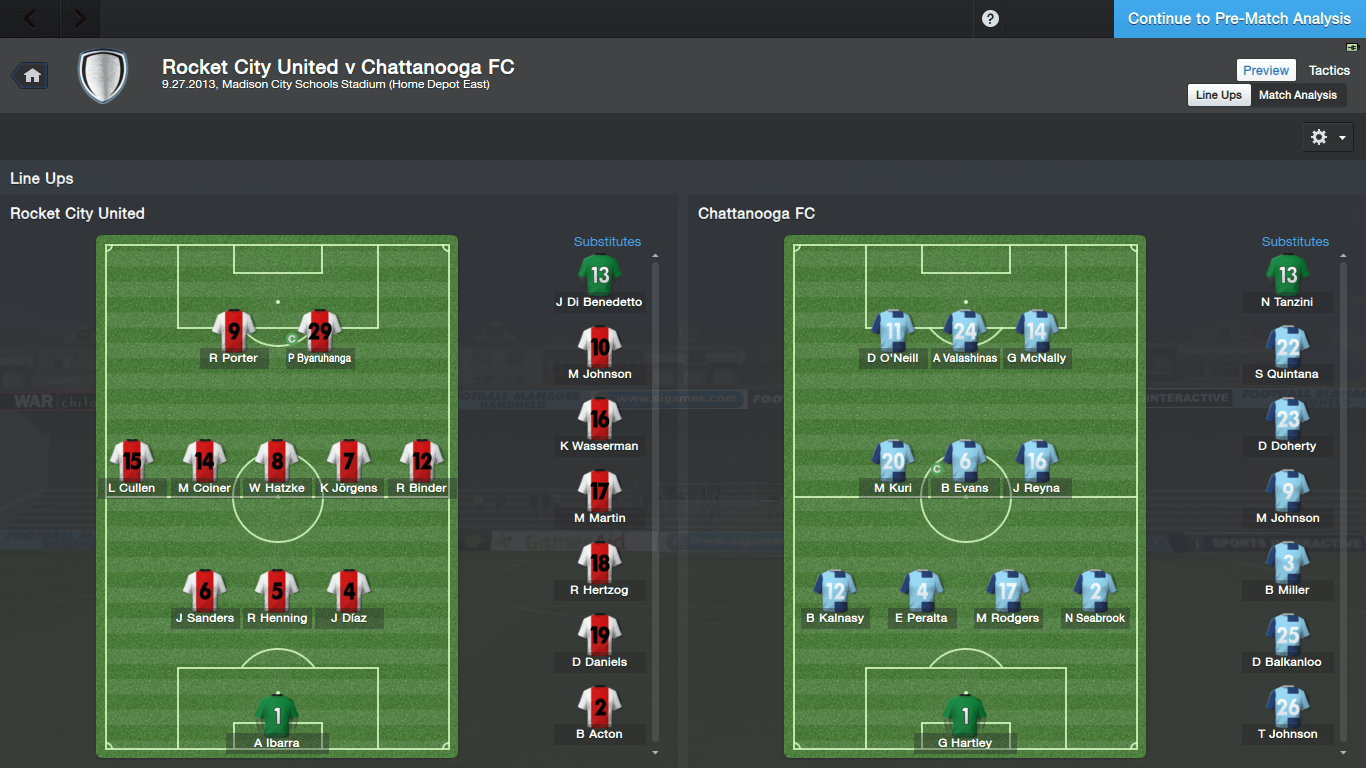 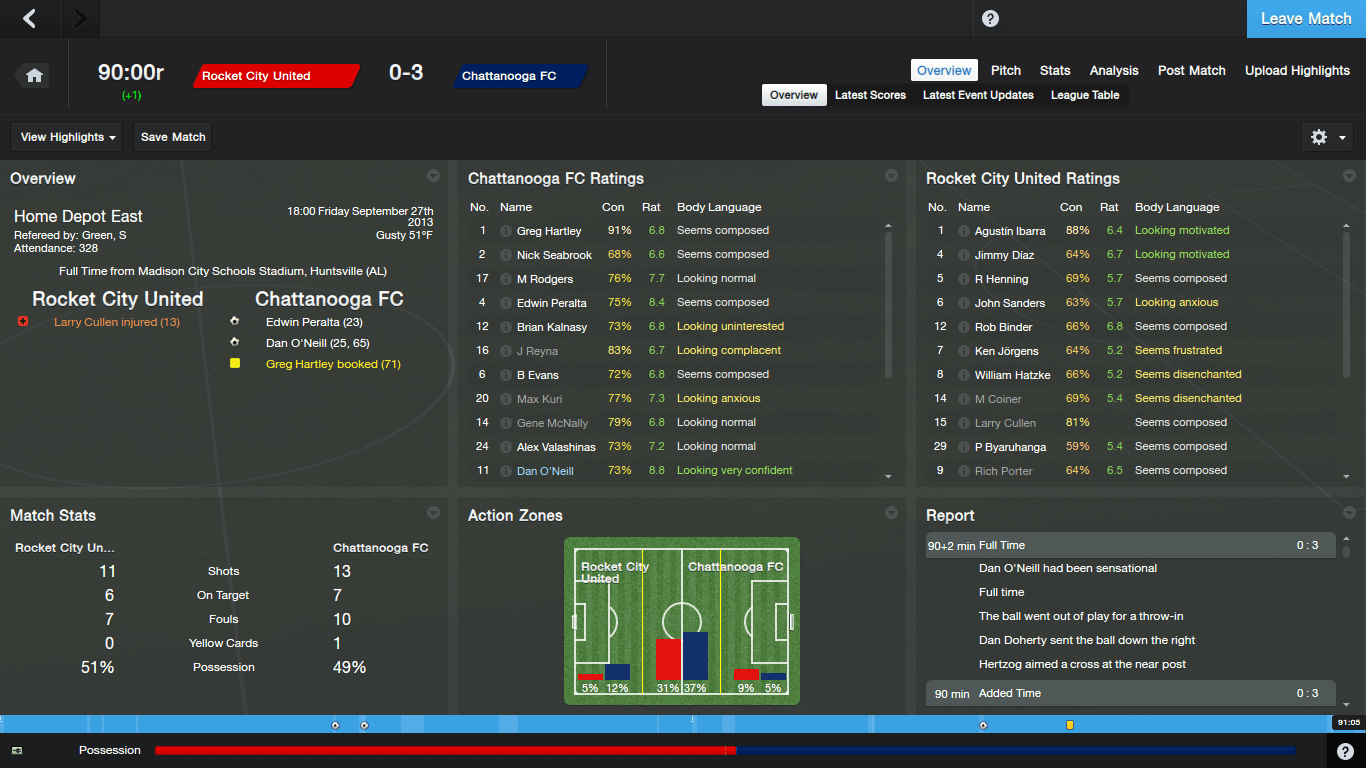 Our run continues, this time extending to the league. Dan O'Neill scored another brace. Rocket City had a goal disallowed for offside.
Player of the Match: Dan O'Neill (Chattanooga FC) 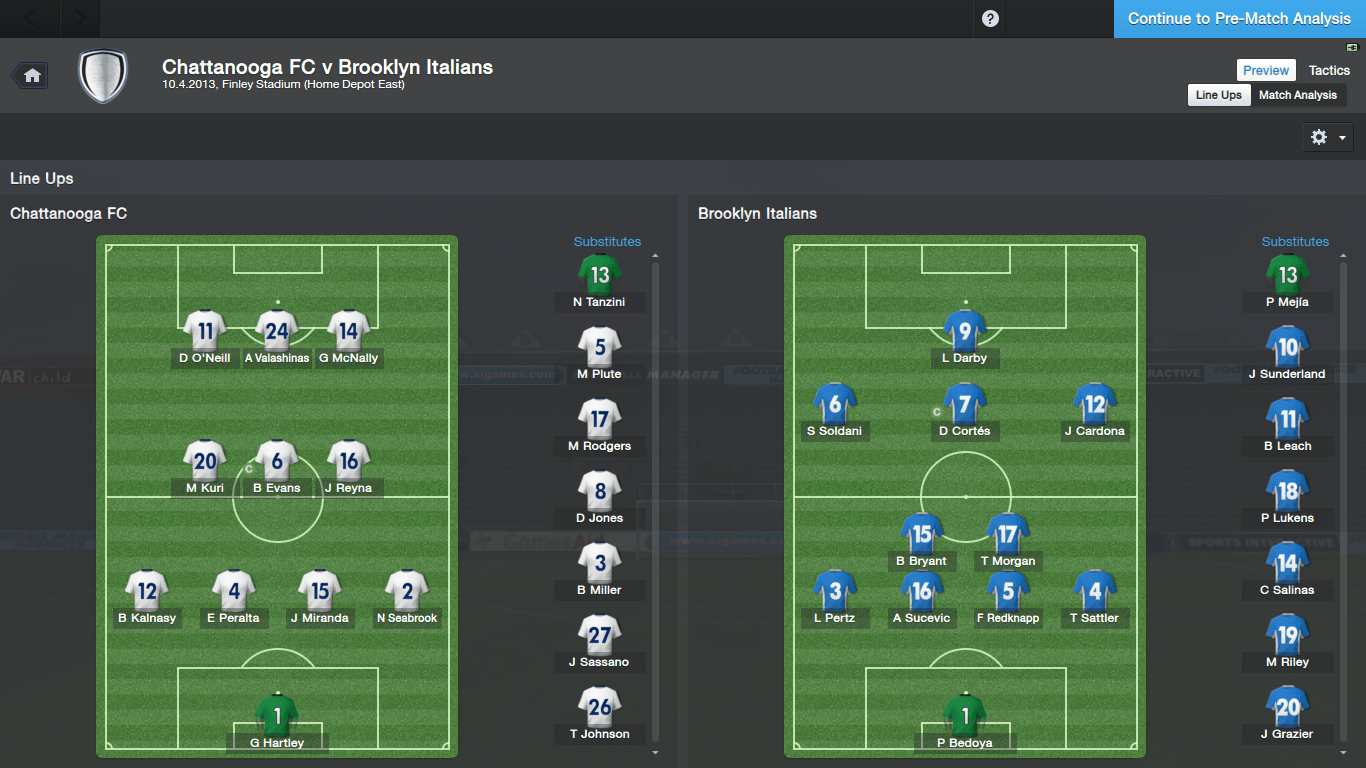 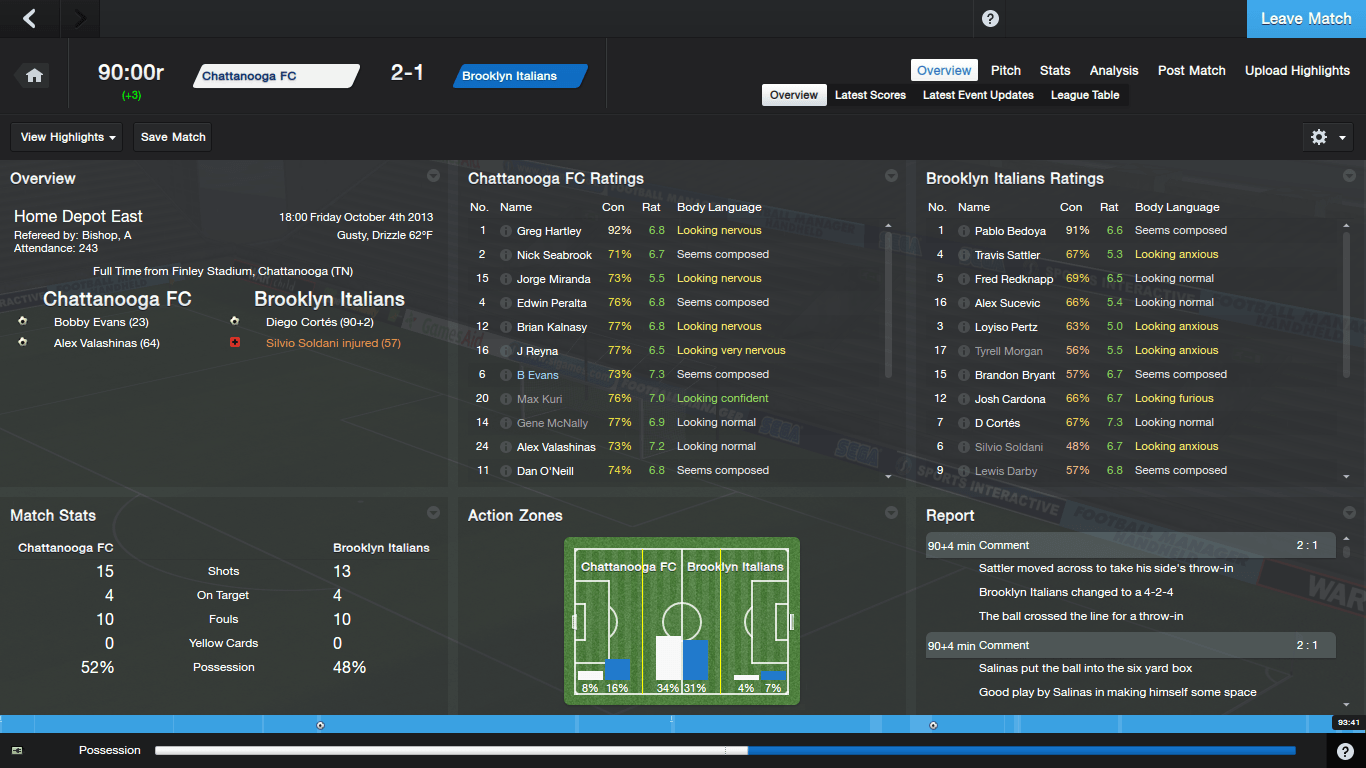 Chattanooga shockingly makes it four wins in a row by defeating the 2nd place team in the league. Midfielder Bobby Evans scored a goal and was the man of the match for Chattanooga. Brooklyn scored one in stoppage time and almost scored another, but Chattanooga held on for the win.
Player of the Match: Bobby Evans (Chattanooga FC) We weren't expected to have a chance, and we didn't surprise anyone with this performance, although we did score a goal in the 90th minute to prevent a shutout.
Player of the Match: Jackson (FC Dallas) 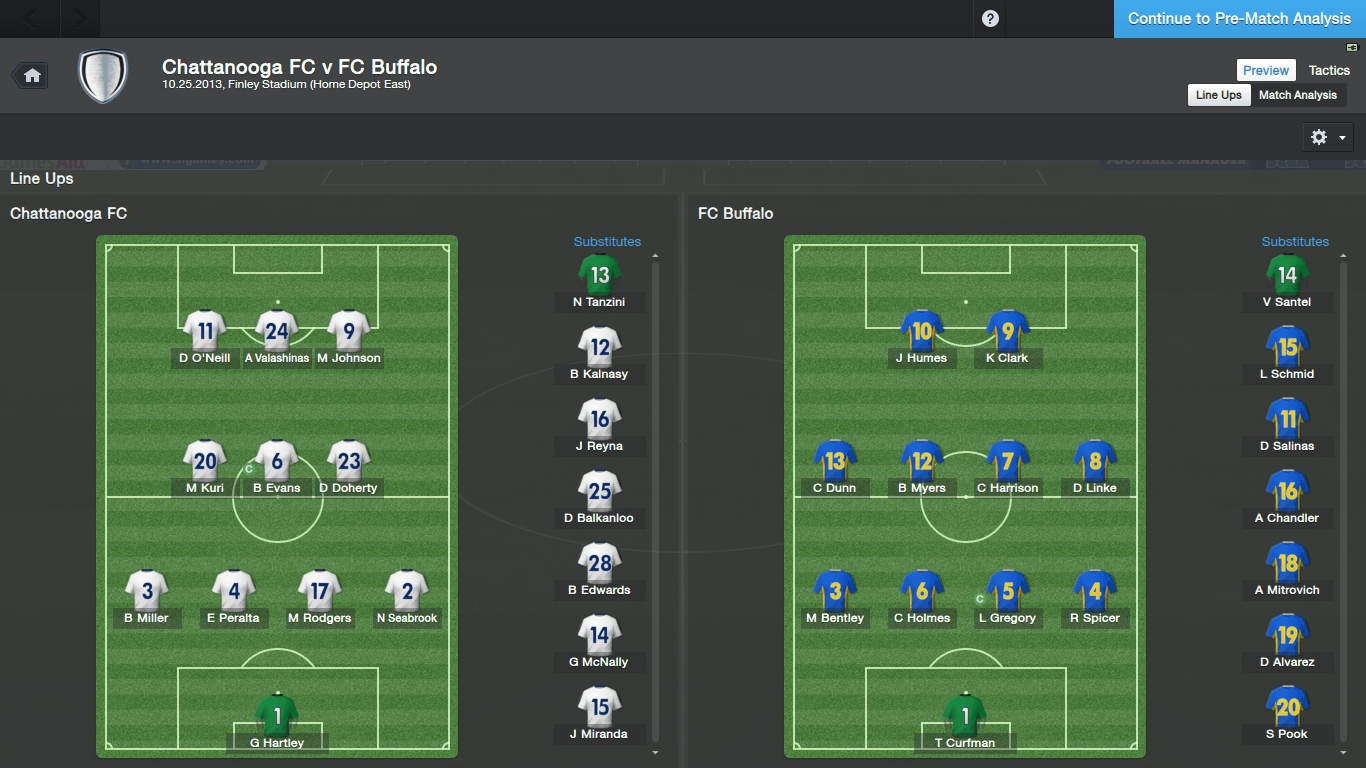 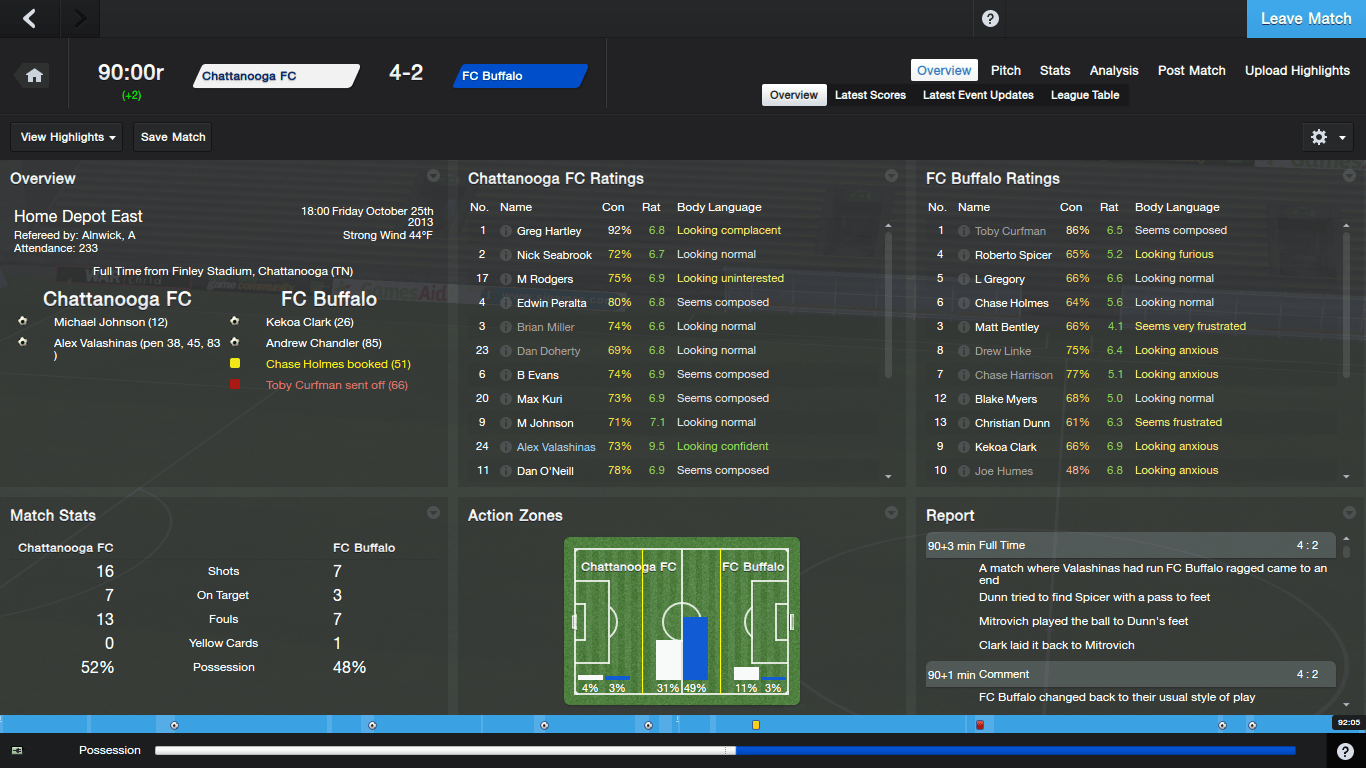 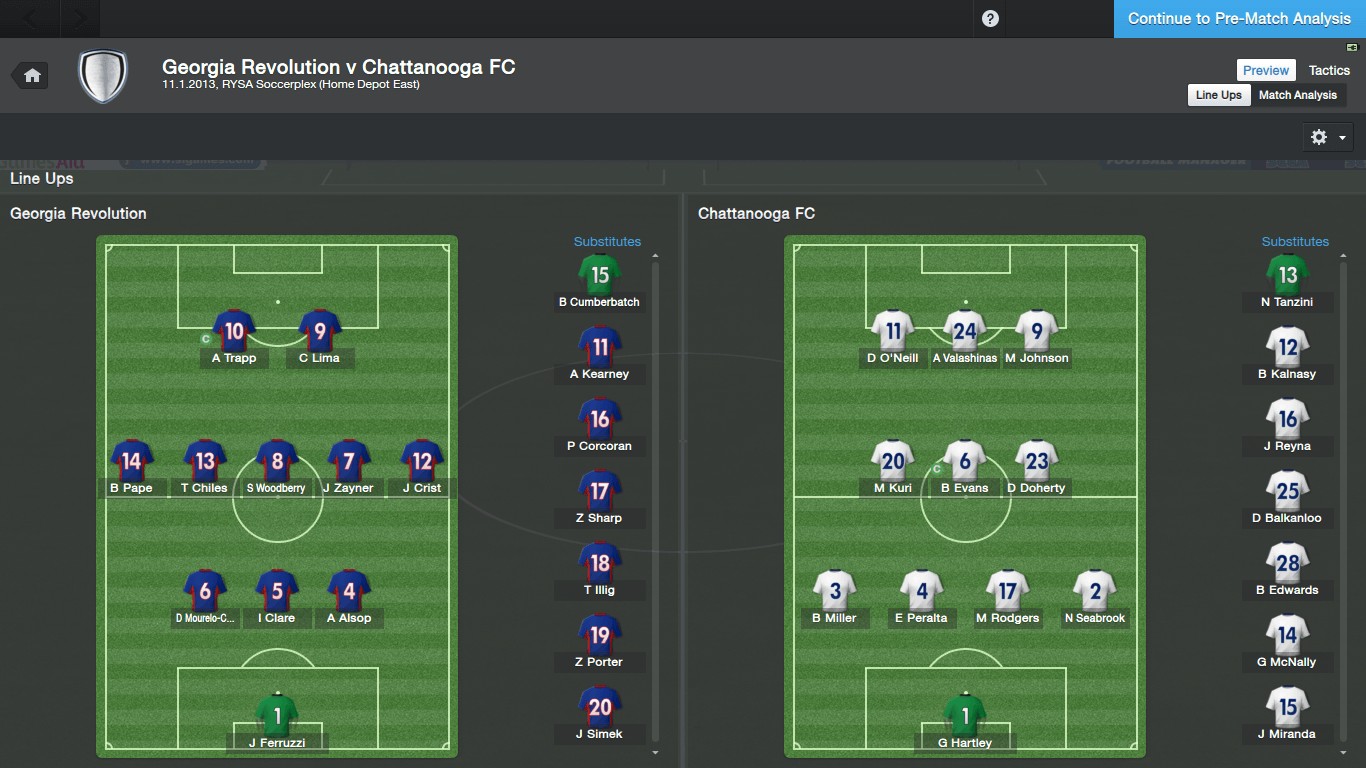 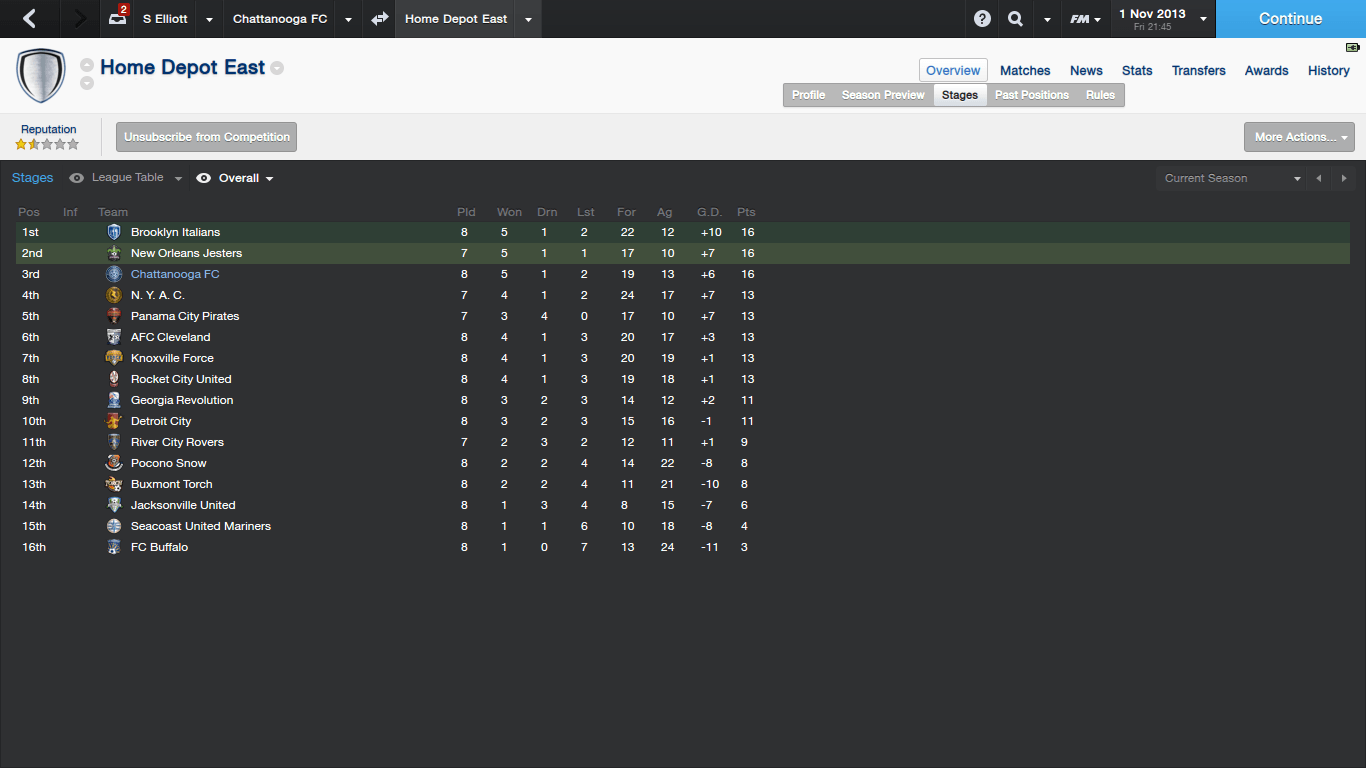 After 2 losses and a draw to start the season, Chattanooga have ripped off 5 straight wins and are suddenly lurking around the promotion slots. It remains to be seen if Chattanooga can keep it up, but they look to be in contention for the top two at the end of the season. There's still 22 games to be played, so a lot can change between now and then.
Login to Quote

Walter
6 years
What a brilliant run you pieced together - bar the FC Dallas result. You have a big chance at promotion.
Login to Quote

shylax
6 years
As the Sasuke story has been allowed by the Sports Interactive gods to continue, this story's time is at an end. I liked this story but I really want to see the Sasuke FC story out, and I know my readers would like to see the same.
Login to Quote

You are reading "The North American Revolution".