With sweeping changes unfolding at Manchester and a host of new staff brought in. Mike Phelan long term assistant manager finds himself in the hunt for employment.

With growing claims from former Manchester united staff that it was they not Sir Alex responsible for their recent successes, there may be no shortage of suitors for the now available crop of would be managers.

With Aston Villa, Fulham, stoke and Sunderland having been allegedly showing interest and chairman with itchy fingers, there may be no shortage of offers for the former Burnley, Manchester united, Norwich and England international.

With so many potential suitors and recent public announcement of his intent to enter management it is only a matter of time till he is calling the shots on the touchline.

In a surprise move Paul Lambert has been fired without a ball kicked in the new season. Randy Lerner is rumoured to of been fed up with the lack of progress that Lambert had made during his tenure and felt that Villas best chance of survival lay with another manager.

Paul Lambert is said to be at a loss.

This move has surprised many within the football community with the Villa board having backed Paul Lambert heavily in the transfer market early in the close season.

It is now heavily expected that former United Assistant manager will step into the vacant Dugout at Villa Park.
Login to Quote

EdenHazard17
7 years
Some decent updates here. Maybe sort out your grammar a bit

sorry about that, i started it on something of a whim late last night, an unfortunate combination of tiredness and a few ales led to it being a little nonsense in parts. i have made a few tweaks but they where pre-coffee.

the pun was pretty much the only reason i chose him.
Login to Quote

good luck, will be following
Login to Quote

... so yeah attempt number 2 at a Mike Phelan villa story
Login to Quote

No1VillaFan
7 years
i can not wait for this one

Note: The transfer revenue was missed of the screen shot but it was 44.15 million

the clubs financial situation necessitated a busy transfer window as did my opinion of the strengths of the squad. the team i inherited was lacking in width, an assessment which is generous considering the complete lack of competent wingers in the squad ergo the loan signings of Gaitan and Salvio. these players will bring pace and bags of quality. My favoured tactics rely heavily on a playmaker in the attacking midfield role and in the short term Brahimi provides a perfect fit and in the long term there are few better than Tomas Martinez a player who develops into a magnificent player. out of the rest of the recruitment it was a mixture of either being available, cheap or being in the right place at the right time. Zuculini is better than Sylla and has the advantage of being free, Henrique and Mayke are talented young full backs and having little time on their contracts it seemed prudent to make a move for them. Souttar, Romero and Erazo where available for the right price and will strengthen the team and i am already eying up a significant profits on each of them in the future.

The staff was poor not much else to say the scouting network limited. this was quickly changed and a further reaching, more competent staff has been recruited. Regrettably a few members of staff where unwilling to move on for reasonable fees and had to be kept on despite their chronic mediocrity.

preseason was poor but then again i left the responsibilty of taking these fixtures to my assistant and the squad was in a state of flux during this period, in short i don't feel much attention needs to be paid to them.


All in all it has to be said that the recruitment undertaken has met the requirements of strengthening the squad and bringing in sufficient capital to keep us comfortably in the black for the 2013/14 season and provide a good platform for future seasons. the number of loanee's and the importance they will play this season is a cause for concern and whilst i have secured fee’s in the contracts of Gaitan and Brahimi i do not expect to activate these clauses. Looking towards the season coming i hope we can actually have a successful season the quality we have added means that i hope for mid table to the lower part of the top half despite a predicted finish of 16th.
Login to Quote

TylerK
7 years
Quite the squad overhaul
Login to Quote Pretty darn even match and we played poorley for the most part. the postives being the point and a debut goal for Brahimi hopefully he will continue to get goals and win us points. There is some expectation that performances and results might take a while to come due to the changes and new tactics that we are deploying. 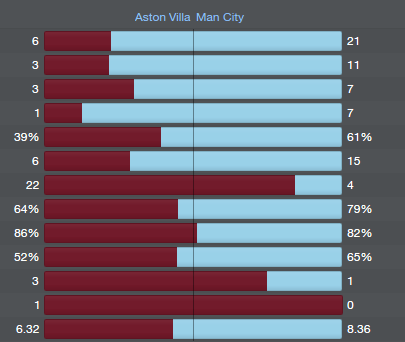 OUCH! we expected a tough match perhaps even to lose but this was harrowing no fight was displayed apart from Alan Hutton getting two yellows in two minutes. not much to be said. positives? 86% of tackles won and it wasn’t seven nil.

Appalling to be frank. poor is the result and poor is how we played. lower leauge opposition and taking the lead early on means that this result was unacceptable. there was anger, loud words and a handful of players will be dropped as a result. 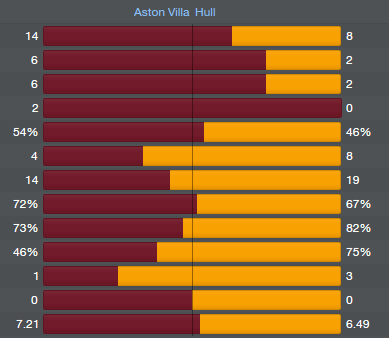 Yay we won and we dominated. we out passed them, we created more we played pretty darn well. These are the games we need to be winning. We can lose against city by any margin everytime we see them but the promoted teams and the struggling ones need to be put to the sword and three points captures.

As far as the month goes we sit in 11th after 3 games, we played well in some games poorly in a few.4 points out of 9 acceptable and puts us on target for 50 points is broadly things are going as they where expected to.

player of the month

Cosmin
7 years
Not a very good start, but I'm sure your results will get better soon!
Login to Quote

You are reading "I've Got A Phelan".