My name is Petar Grakowski, I am the son of a Polish immigrant to Germany. Before I tell you of my journey, here is a little background information.

I am from the town of Furth, just outside Nuremberg.

From when I was little, my father took me along to a couple of Greuther Furth games every season. They were the best days of my year, I would anticipate the games I was going to for weeks before, I loved the colours, the noise of the crowd, and of course I loved the beautiful game.

As I grew older, like the vast majority of boys, I came to the realisation that my dream of becoming a professional footballer (and playing for Furth, or even the German national team) was over. That's when I started becoming interested in football coaching. I went away and studied for a junior badge at the age of 15, and I became a coach for a local team

Around this time, I was going to all the Greuther Furth games I could, even going on some away days. I loved the club so much, I decided to join the Furth Ultras.

I went to every game with the ultras, and on the last day of the Bundesliga 2012/13, when I was 25 (I had joined the ultras at 17) we had to beat 1899 Hoffenheim to stay up. Edgar Prib put us ahead at the Trolli Arena, and the noise was unbelievable. Everyone was dancing about and celebrating. That was the moment I knew I would never betray this club. However, our celebrations were highly premature. Kevin Volland and Eugen Polanski scored in quick succession to put us 2-1 down. Then the final whistle went.

I couldn't believe it, we were down to the 2.Bundesliga again. After the game, someone waned to interview me and I went into detail about how I thought Furth should be playing. I don't know why, I just did. It turned out the chairman, Helmut Hack liked what I had said, and had heard about my success in amateur management. (I had lead FC Furth to the local league title 4 times in 7 years). Mr. Hack was also unhappy at being relegated and fancied a new, fresh direction for the team.

When I heard that Frank Kramer, I wasn't too shocked. We had been relegated after all. What did shock me was when I got a phone call, and Helmut Hack was on the other side.

He said "As you will know, we have recently sacked our manager, and therefore are in searching for a new one. I believe that SpVgg Greuther Furth need to take a new direction to regain our place in the Bundesliga. I have been impressed with your achievements at lower levels of management and am willing to offer you the job of manager at our club"

I couldn't believe what I was hearing. "Wow. Thank you for your offer Mr. Hack, I am flattered. I will have a hard think about this and get back to you soon."

Would I take the job?


Sorry for no pictures, I had some problems with them, but hopefully it will be better next time!
Login to Quote

Of course I would take the job. I didn't go for just the money, although at £7,000 a week, it's pretty good in that respect! Helmut Hack had a chat with me as soon as I arrived, saying I was to finish in the top half of the league. I thought that was very achievable, although in reality I was dreaming of promotion.

There was one problem though, which was my transfer budget. It is just £170k, which isn't too much to work with. I don't think I will be making any signings as a result which will be disappointing for the fans. My tactic will be a 4-4-2 diamond formation, the selection a mixture of my knowledge as a fan, and the advice of backroom staff. 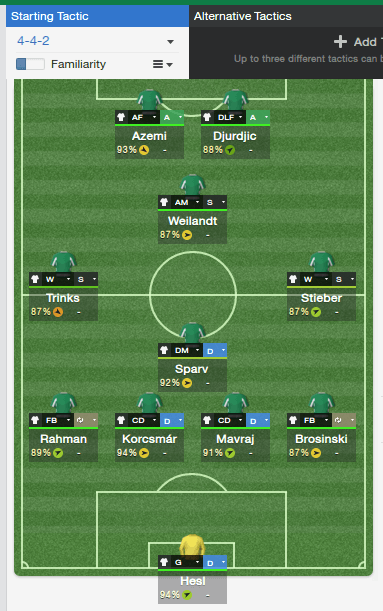 Regarding players I will be selling, there is only one, and it might wait until January. At the moment, both Tyrala and Furstner (versatile midfield players) are injured, but when they come back, there will be no point in keeping Zillner anymore. With my youth system, I am impressed. However, I will be looking for a feeder club to loan my "B" team and U19 prospects out to.

Lastly, I had an interview with the local newspaper to introduce me as the new manager.

captainbrickarms
9 years
Looking good keep it up.
will be following

You are reading "FM14: Ultras Important".