JamieBohs
8 years
Every Sunderland fan as a child is told by their fathers and grandfathers about the legendary 1973 side who brought the F.A Cup home to Wearside after beating English giants Leeds United 1-0 through an Ian Porterfield. They're also told about Bob Stokoe the magician who's quote still sends shivers down Sunderland fans spines, "I didn't bring the magic. It's always been here...I just came back to find it." The only problem is Sunderland haven't seen any of this magic since 1973.

Sunderland as of today have relieve manager Paolo Di Canio of his managerial duties at the club after a nasty bust up with the players. The Italian had only been in charge for eight games in which he claimed a priceless win at 0-3 win against Tyneside rivals Newcastle United at St.James Park and a win against Everton which was enough to keep the side in the Premier League. Their is not a lot of interest around the job with journalist labeling it as a "Poison Chalice". Sunderland fans have become accustom to the manager merry go around with over 4 managers sacked in the last 5 years.

Paddy Power and Sky Bet have had a few outside bets on young Irish manager Jamie Guildea who was a player for the club in 2008 before a nasty leg break which ended his career in a friendly match against Irish side Bohemian FC in Dalymount Park. We will have more as it comes.

We have just got news that Guildea is now in his first press conference. We will switch over to our Sky Cameras at the Academy Of Light.
Sky Journalist: Obviously, you must feel very lucky to be offered such a big job in the Premier League as your first line of work. What do you feel you can do with Sunderland in the future?
Jamie Guildea: Well I am currently on a one year contract so the board will judge me on what I have done this season but I obviously have a five year plan for the club where I can see us competing for Europa League spots at the end of the five years. I would also like to win a cup at this club within the five years and ideally it would be done in my first season. That's all I want to answer today. I'm now just eager to meet the players and get my ideas and plans across to them. Thank you.
Login to Quote

JamieBohs
8 years
http://www.fmscout.com/datas/thumbs/banner-skysports_1_64682.png[/img]
Guildea say's "Sunderland have made brilliant advances in the Pre-Season and are raring to go in the Premier League" this weekend against London side Fulham. Guildea was speaking in a press conference at Aldershot's recreation ground where Sunderland rounded off their pre-season with a comfortable 0-1 win with Welsh man David Vaughan grabbing the games only goal.

Sunderland played 4 other pre-season friendlies with two of these friendlies taking place in Italy whilst the club was on a training camp. Sunderland started off their pre-season with a 2-3 loss at the Stadium Of Light to Santos Laguna. They then bounced back with a solid 0-4 win over Silkeborg IF. Then it was the shores of Italy where they shocked a lot of people with a 2-2 draw with Italian champions Juventus at the Juventus Stadium then they had a brilliant 0-2 win against Catanzaro. They then finished up pre-season back on the rainy shores of England with a 0-1 over Aldershot. 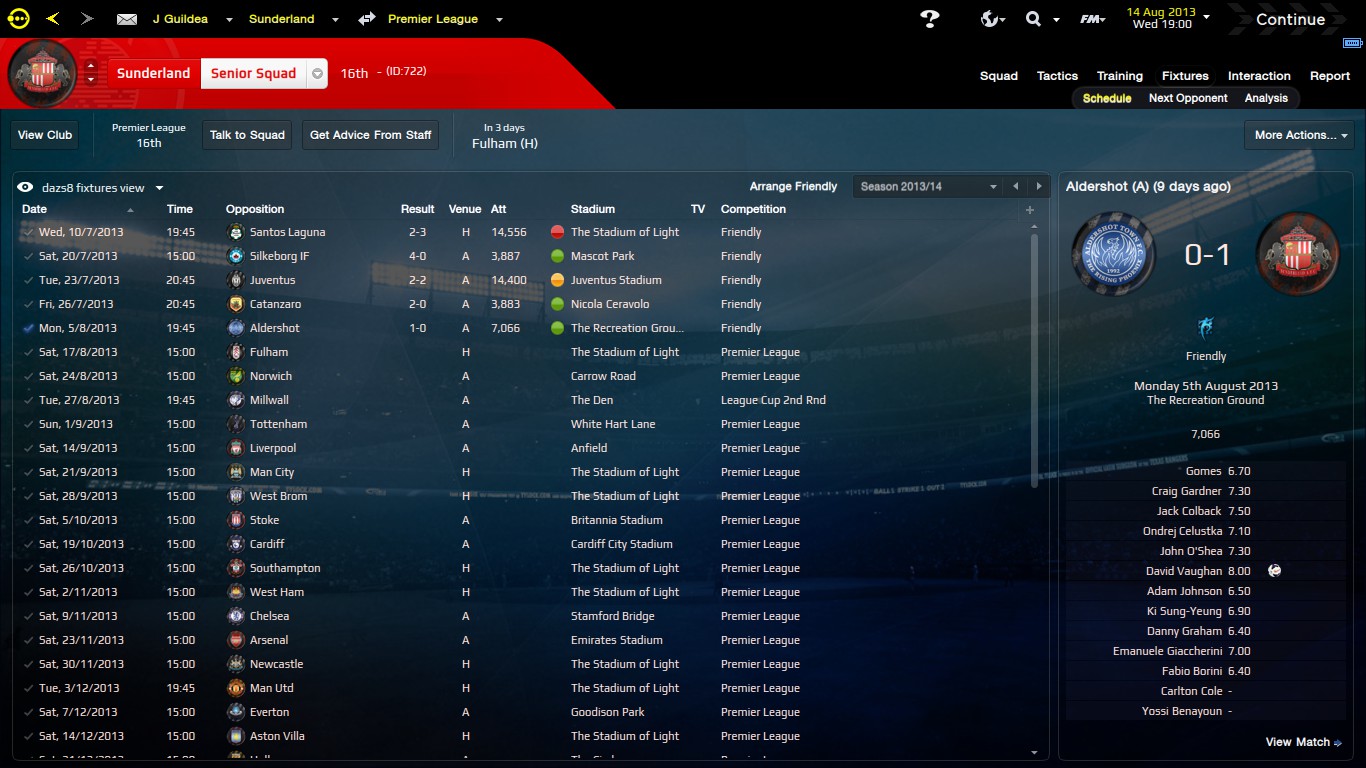 Sunderland have also been very active in the transfer window signing no more than 4 players who have all played at the top level of football. The two standout signings are former Totthenham goalkeeper Gomes for a fee of 625K. Israeli man Yossi Benayoun also signed on a free transfer whilst Keith Fahey and Carlton Cole also gave their services to Sunderland. However Sunderland are close to securing the signing of PSV full back Manolev for a fee of £2.7 million. Danny Graham was also recalled from his brief loan spell at Hull.
On the way out however is Swede Sebastien Larson who completed a £3.1 million move to new boys Cardiff and South Korean Ji Dong Won joined FC Porto for £3.1 million with a £5 million buy back clause. David Moberg Karlson, Connor Wickham and Billy Knot all left on 3 month loan deals. 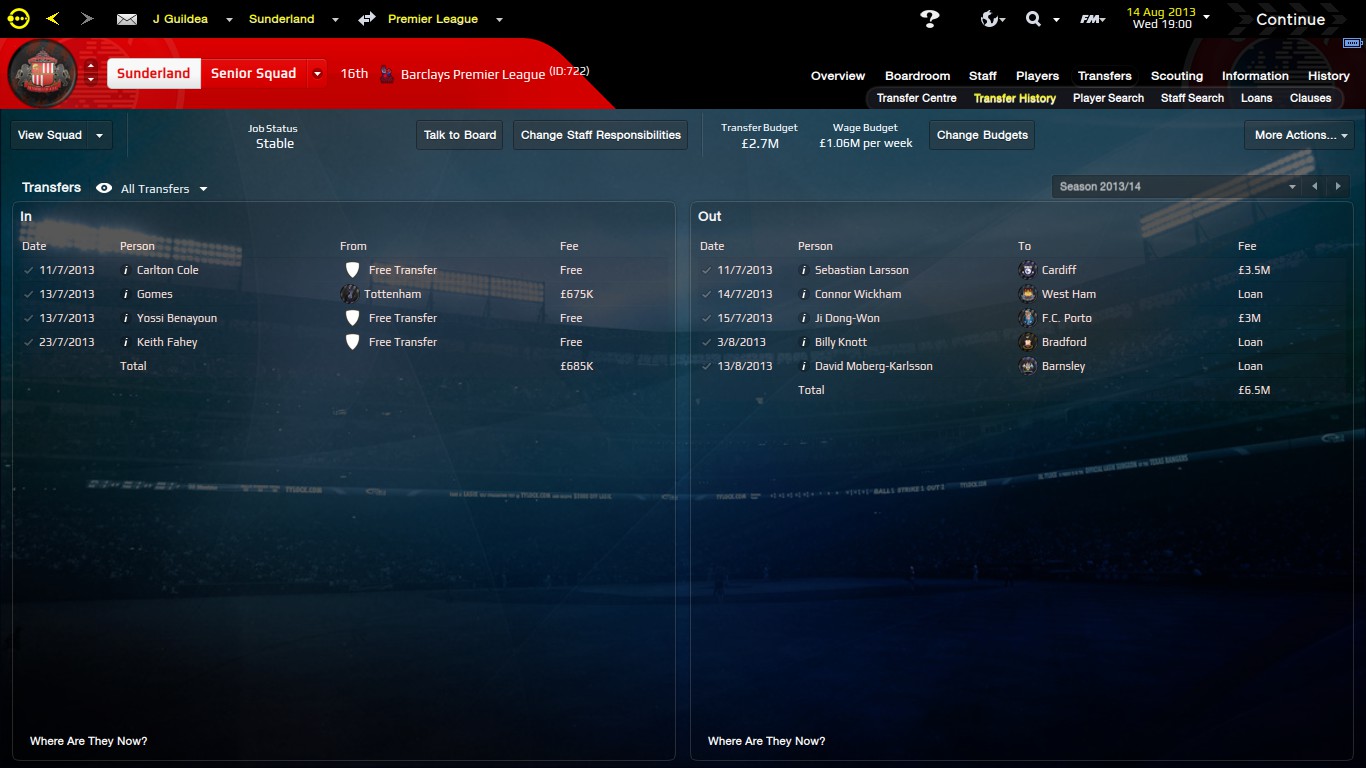 You are reading "Wise men say.".