PJGrieve7
7 years
I walked from the changing rooms after my team talk. I still had work to do. Think about what I was doing for next season. This year had been great! My first year in football management, and it was as the manager of Manchester United. After the man himself, Mr Glazier came to my door last year, and asked me to manage his team - and take on the role after probably the greatest manager to ever live – I can’t believe what this year has been like! It’s been havick!

I walked into my office and chucked my tactics on the table, and slumped into my comfy chair. It had been a long, but absolutely brilliant! I got up, and grabbed a can of Irn- Bru from the mini fridge under the telly. While I was there I turned it on, watch some Sky Sports News. The new presenter was a beauty! “Wonder what they’re saying about us after today’s result, I’ll probably be in the news as well as the team. I can’t believe I’ve gone from stacking shelves in TESCO, to this, its class!” I said to myself, without even realising.

I called in Steve (Round) as soon as I put SSN on, the first thing I see is this image: 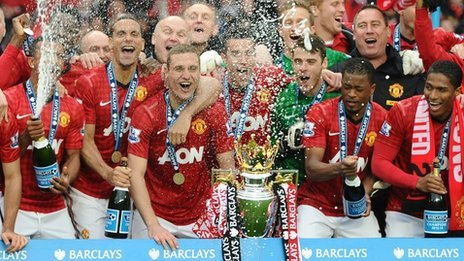 The lads lifting the trophy.

“Yeah boss, it feels great huh? I love the feeling, won it a few times with fergie;)”

“No problem boss, it’s what I’m here to do, assist the manager” He gave me a little wink.

We opened a fresh bottle of very expensive champagne, since I was now on £91,000 a week, after I was given my new contract

After we had a couple of glasses of champagne, myself and Steve just decided to go home, and I sent out an E-mail to everyone in the club, telling them, that they’ve got the day of tomorrow, and I went home for a well earned sleep.

I had started a story on this but it never really caught on, hope you guys enjoy.
Login to Quote

captainbrickarms
7 years
Good luck!
I will follow with interest

You are reading "Manchester United - A New Kid on the Block".