Neville: "Who in their right mind would leave a club like Manchester United for Monaco?"

Gary Neville has dismissed reports that he is going to manage AS Monaco in his recent press conference, stating that "Who in their right mind would leave a club like Manchester United for Monaco?"

Neville has had a great start to his managerial career at Manchester United with the club at the summit of the table and in great form.

AS Monaco however are 12th place and look more and more unlikely to reach the Champions League spots come the end of the season.

In other news, former Everton manager David Moyes, who was close to getting the Manchester United job, has become the manager of AS Roma in Serie A.
Login to Quote

Gary Neville has responded to interest from AS Monaco by signing a new four year contract as manager of Manchester United.

Neville stated that he was delighted to be offered a new contract and hopes to help the club move forward in the upcoming seasons.
Ed Woodward also expressed his delight that Neville signed a new deal.

Manchester United are currently 1st in the league and look in good form to get their next title this season, after reclaiming it from noisy neighbours Manchester City last season.
Login to Quote

This month has some important fixtures coming up, Liverpool away will be a tough game and may determine our run of form this month, also we have PSG away which again will be a very tough game, so lets hope the players can pull through this tough month and get us to a great position in the league and the UCL. Good win to start off this month, going away at Norwich can be tough or can be very easy, we made hard work of the game and it took a set piece to win us the game, however 3 points are 3 points. We should have won this game, unbelievable. We were up 1-0 for most of the game as Antonio scored yet another goal, we defended for our lives and Galatasaray pushed up the tempo and at the final minute, Didier Drogba got the equaliser.. Great home win against Hull! We were expected to win this game but a 5-0 thrashing! We played excellent. Marouane got another goal for himself again, and Robin and Nani both got two goals to round up a great weekend for us! A GREAT WIN! We dominated our rivals and beat them 2-1! Nemanja got us the lead before Iago Aspas equalised, and then the moment that shocked everyone in the stadium, Shinji Kagawa got the ball in our half, ran forward, past Liverpool's midfield, went around Martin Skrtel and chipped over Mignolet, MAGICAL! (Or as Ray Hudson would say 'Drawing gasps out of this crowd!') First defeat this season, and quite frankly, PSG deserved this one. We played great, but PSG had that little bit of class upfront with the Ibra and Cavani combo and boom, they finished us off in the second half.. however we've both qualified and we are at the top with a two point cushion from PSG. We round up the month with a standard away win against Fulham, nothing more to say I guess, we could have scored more but 3 points are 3 points! Still at the top! 4 points away from Manchester City in second and it could be more as we've got them next in the league! 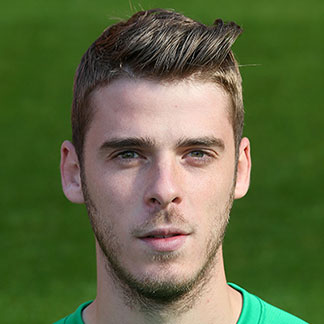 His work this month has gone unnoticed by many but not by me, he has been a vital factor to winning some games this month and through-out this season.

k1rups
8 years
Great work in the season so far and some very good signings! Obviously Neville would never leave United for Monaco!
Login to Quote


Thank you! Yeah, Pjanic and Alex Sandro have really added something to the team.
Login to Quote

No1VillaFan
8 years
I agree I think the title is going to be yours to lose and manager of the month too!!!
Login to Quote


Thanks! I see us going all the way to the title however injuries could play a huge part in the final outcome!
Login to Quote

Honours even at the Eithad

David Silva rescued a point for the blues as Manchester United dominated the game right from the off.

In this highly anticipated game, both Robin van Persie and David Silva scored to keep City's hope of catching United at the top alive.

The game started as your usual derby would, with both sides fans screaming and cheering, and the atmosphere was electric, with both teams trying to get ahead as soon as possible.

City had set up to fully attack Manchester United with Sergio Aguero feeding through Negredo only for him to fire over the bar from 12 yards.

However, Manchester United exploited City's tactics and in the 10th minute of the game, Shinji Kagawa played a one two with Michael Carrick, who played in Robin van Persie, van Persie, who almost joined Manchester City at the start of last season, went round Joe Hart and placed the ball into the bottom corner to make it 1-0 to the red devils.

City tried to respond quickly as Jesus Navas crossed the ball into the six yard box but Sergio Aguero couldn't reach the ball and it went clear for a Manchester United goal kick.

The rest of the half was much the same, with United exploiting City's tactic but Joe Hart kept City in the game.

In the second half manager Gary Neville brought on Wayne Rooney for Shinji Kagawa, who got lots of applause from the travelling United fans.

City kept the pressure on and when David Silva put the ball through to Aguero, David de Gea made a great save to keep the score at 1-0.

However, shortly after David Silva regained the ball from a Yaya Toure pass and scored past de Gea, however many United players complained that Silva was offside, and later reports showed that he was.

United tried to get back in front but in the end the game ended 1-1 and keeps City four points behind Manchester United at the top.
Login to Quote

Barcelona midfielder Cesc Fabregas has stated in a recent press conference that a move to Manchester United 'is possible'.
Fabregas has played in the Premier League before with Arsenal and wants to come back and play in the 'best league in the world' according to him.

Manchester United have expressed high interest of Fabregas' services over this season and they have not ruled out a possible move for him in the upcoming January transfer window.

However Barcelona will have other ideas and may want to keep the Spanish international, however if he is free to go we could expect his former club Arsenal to join in the race to sign him.
Login to Quote


The groups for the 2014 World Cup have been drawn:

Group A sees hosts Brazil face some tough opposition, with highly rated Belgium with the likes of Eden Hazard and Ivory Coast, who have some very good players which makes them a solid team. They also have Australia but to many people they are not seen as a huge threat.

Group B sees favourites Germany face bitter rivals England which will be the biggest match in that group, but also Costa Rica and Peru which can be a good team on the day, but Germany and England are seen as favourites.

Group C sees Columbia placed in a very easy group, a win is on the cards against all teams for them.

Group E sees Italy face Uruguay which will be the biggest game in that group, however they have two solid teams to face as well, with USA challenging for 2nd place and Ukraine trying to get back to former glories.

Argentina's toughest task in Group F will be to face a very good Bosnia team, apart from that, they are the favourites to progress with the likes of Lionel Messi and Sergio Aguero.

Group G sees Portugal have a very easy group which they should progress in with ease.

Group H sees World Cup holders Spain take on a solid Japan side, a decent Norway team and a very challenging Chile team, in all they are expected to progress but they will have to work hard to progress into the next round.
Login to Quote

Verdinho
8 years
Fabregas would be a great signing

Interesting groups. Portugal should dance through
Login to Quote

Manchester United centre back Rio Ferdinand has signed a new two year deal to stay at the club 'until the end of his career'.

Ferdinand joined Manchester United from Leeds United in 2002 and has been a first team regular for many years, and he has stated that when he retires he would love to become a coach at Manchester United.

Manager Gary Neville has spoken to the media about Ferdinand's new deal:

"Rio has been great throughout his many seasons here and still continues to impress everyday. I am delighted that he has signed a new deal and hope he continues his good run of form."
Login to Quote The draw for the UEFA Champions League last 16 has recently took place, here are all the teams and who they are against:

Bantams
8 years
Tough draw there josh, will have to be at your best to beat Juve, will be interesting to see who wins the real bayern tie too, good luck!
Login to Quote