The database has been completed and the save is loaded. I've now got screenshots of all the players ready to reveal to you! 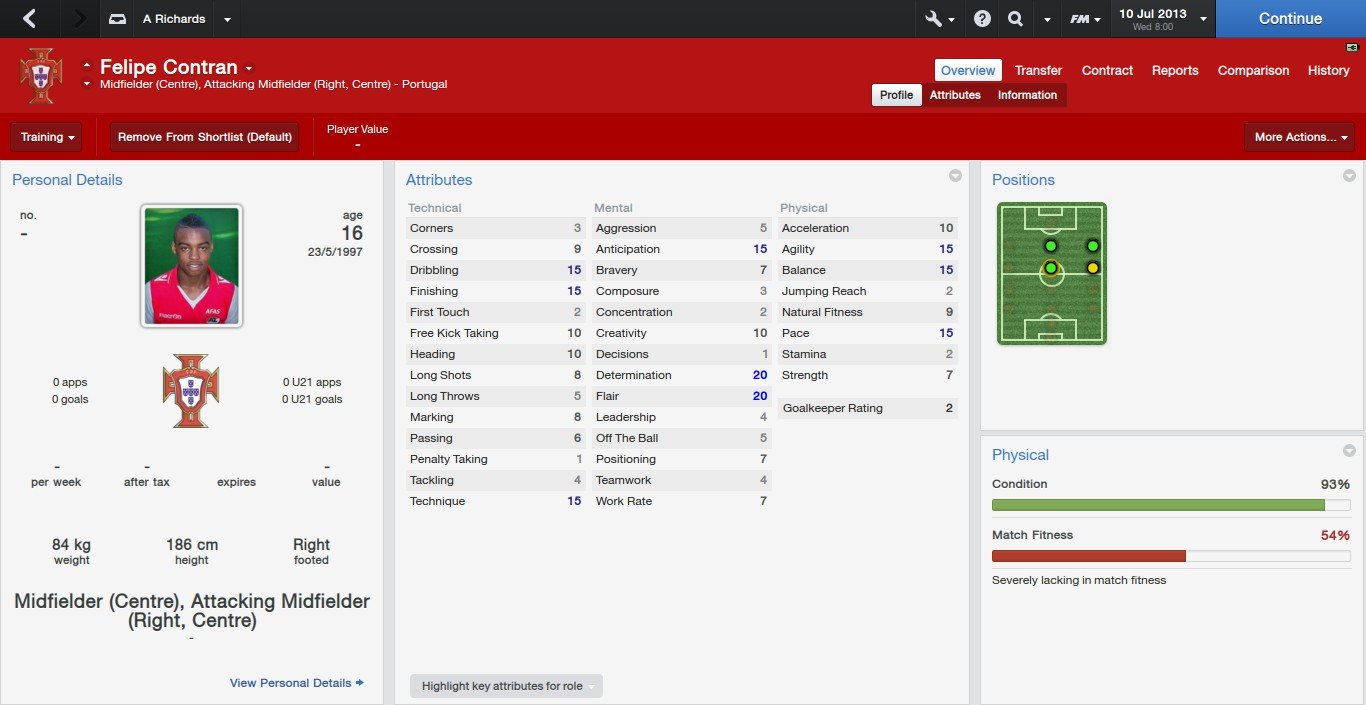 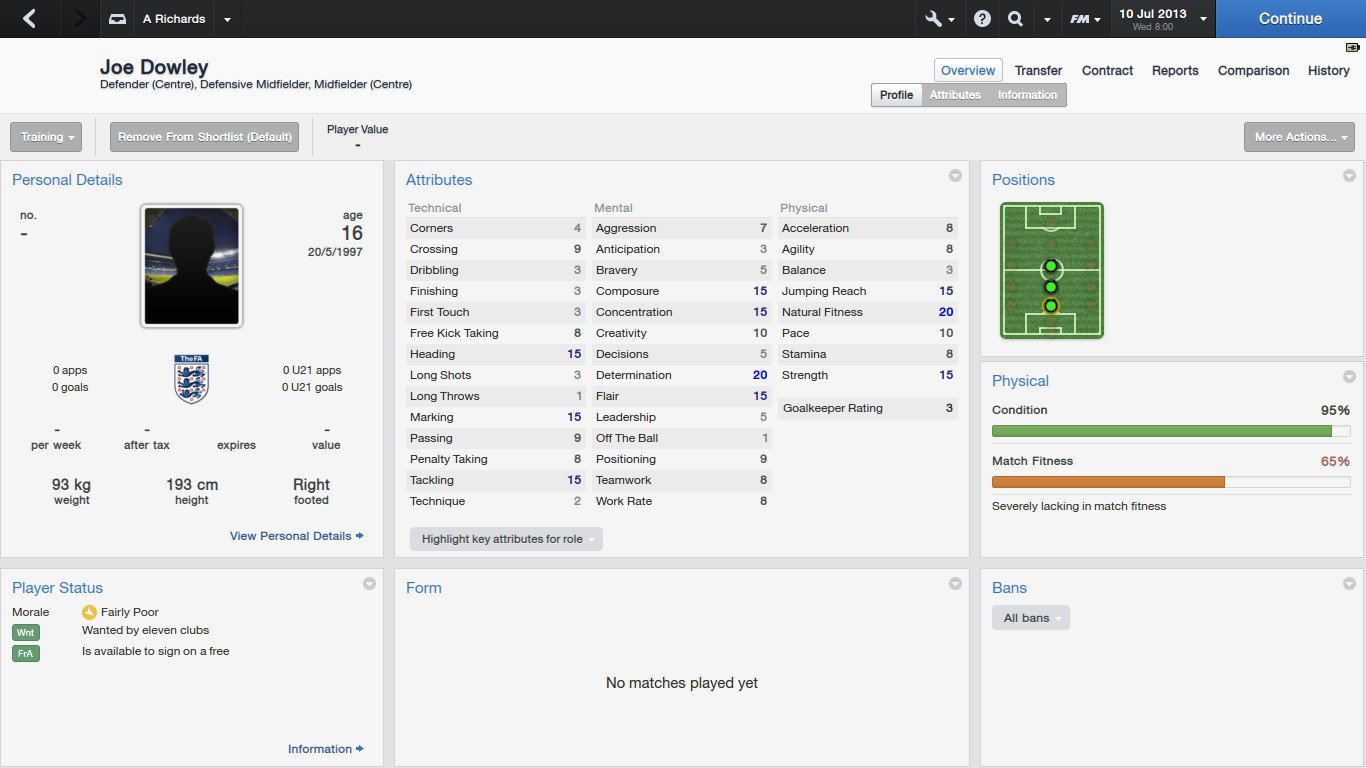 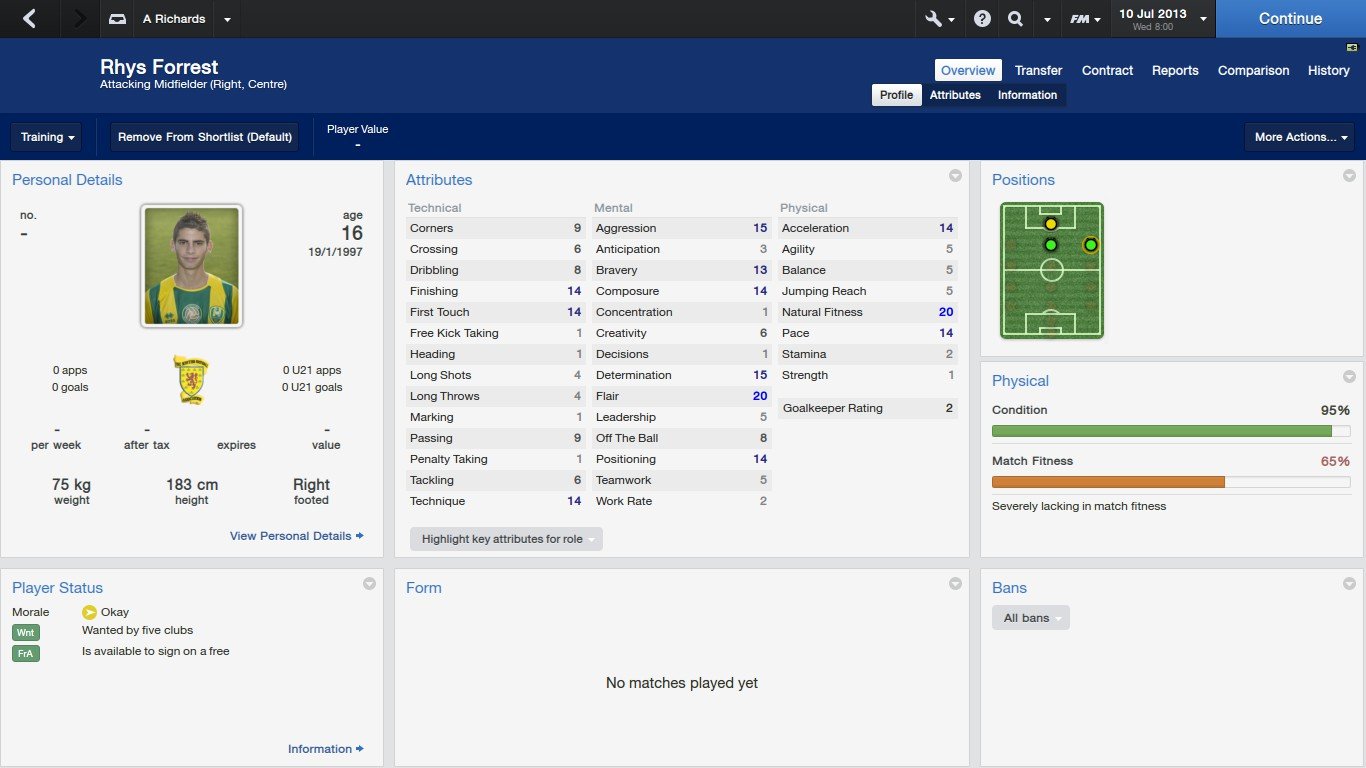 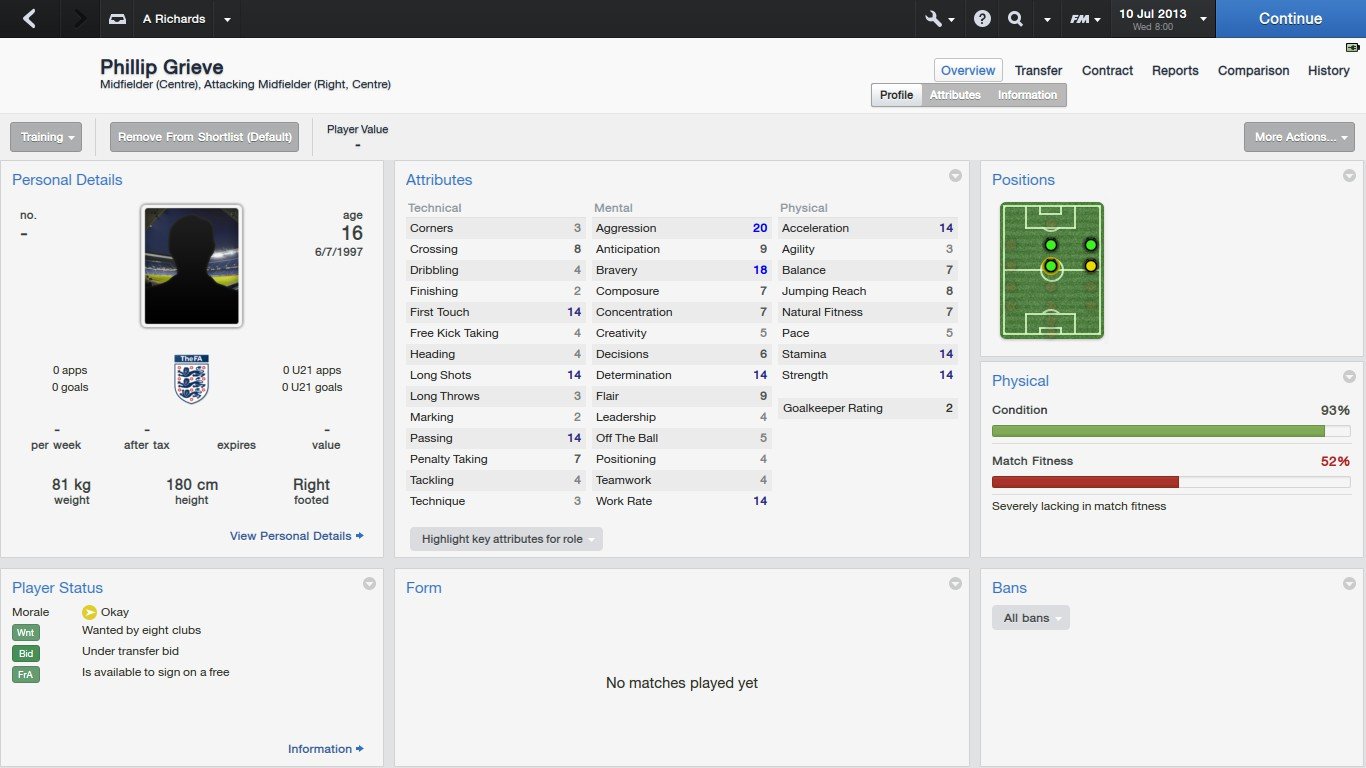 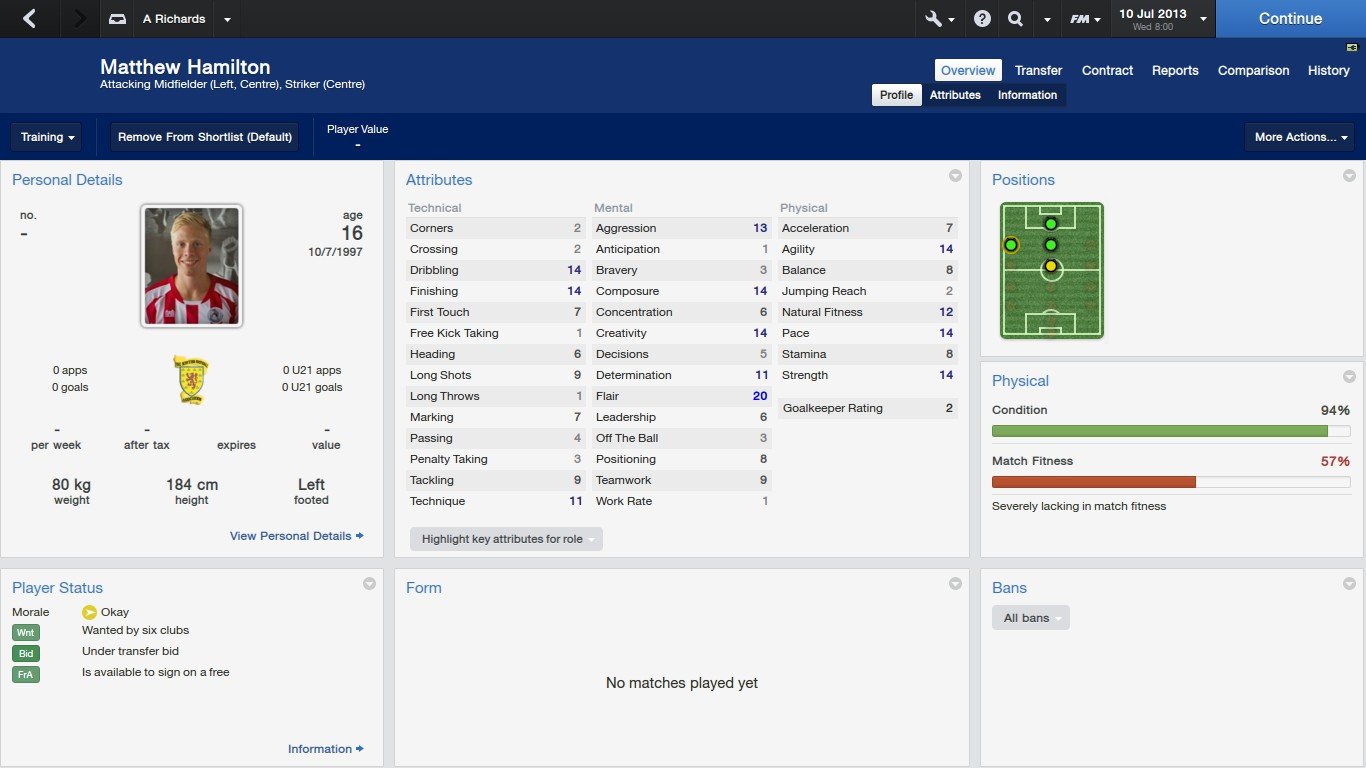 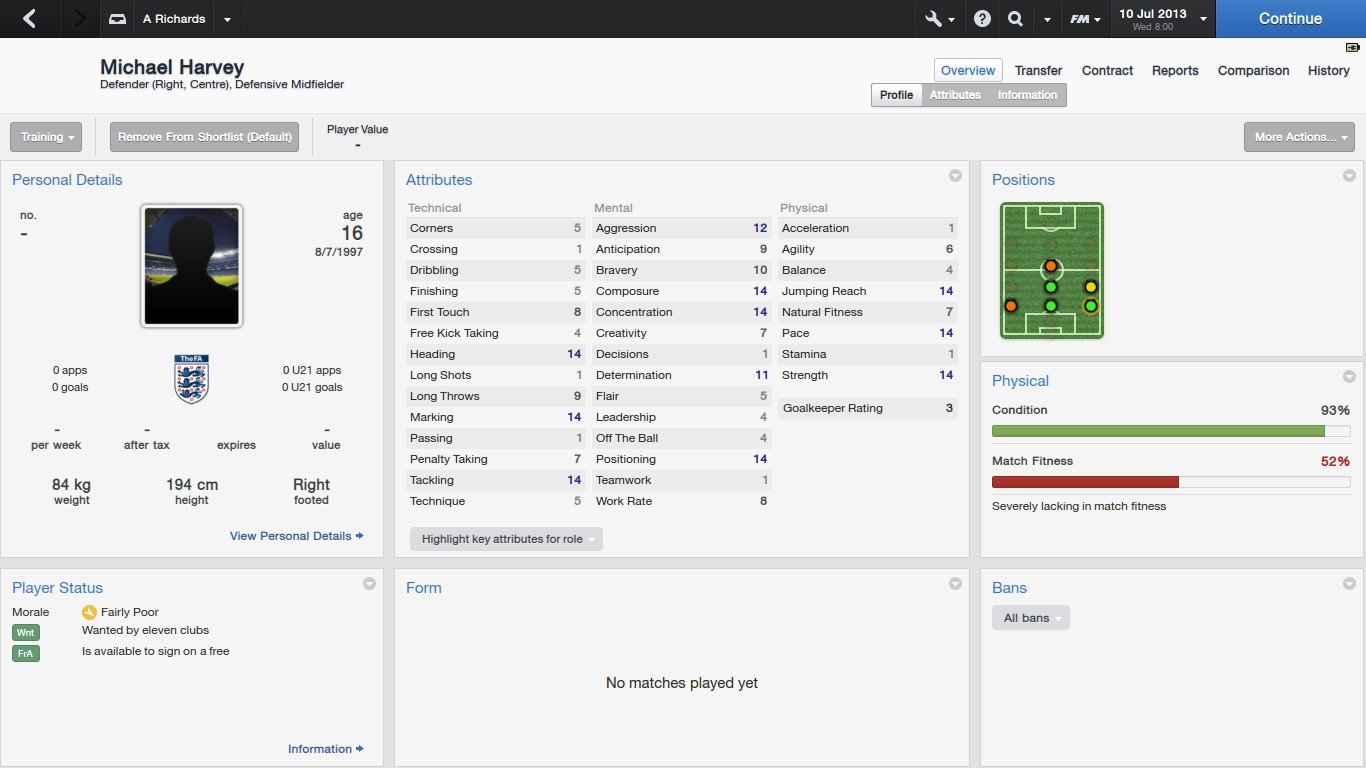 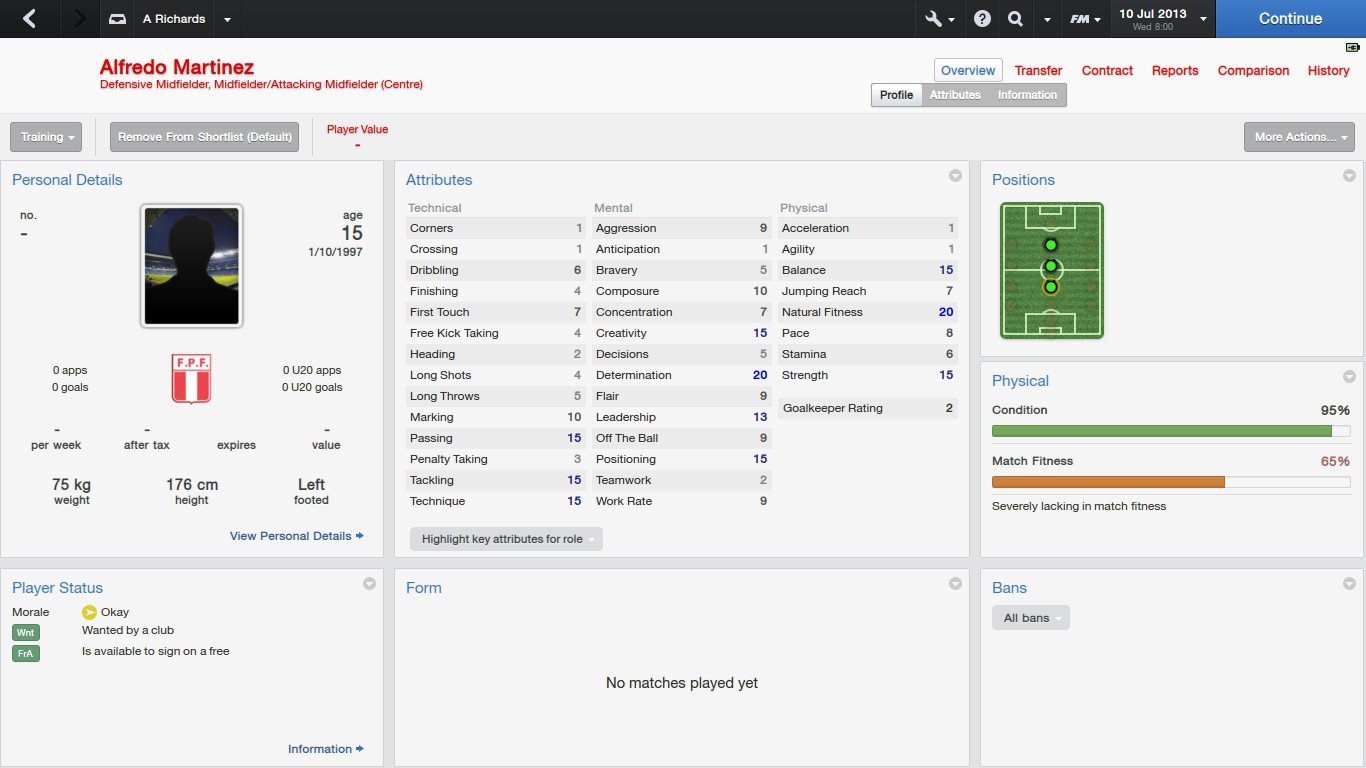 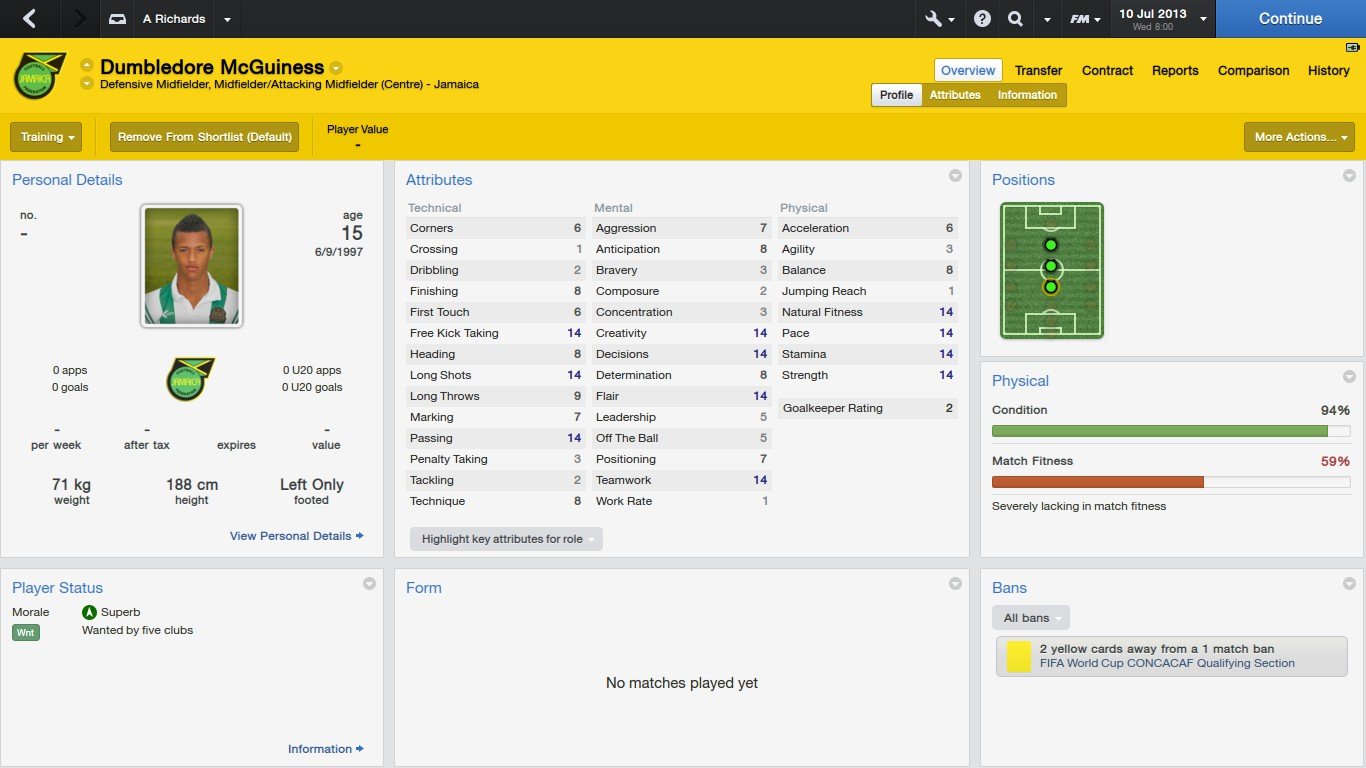 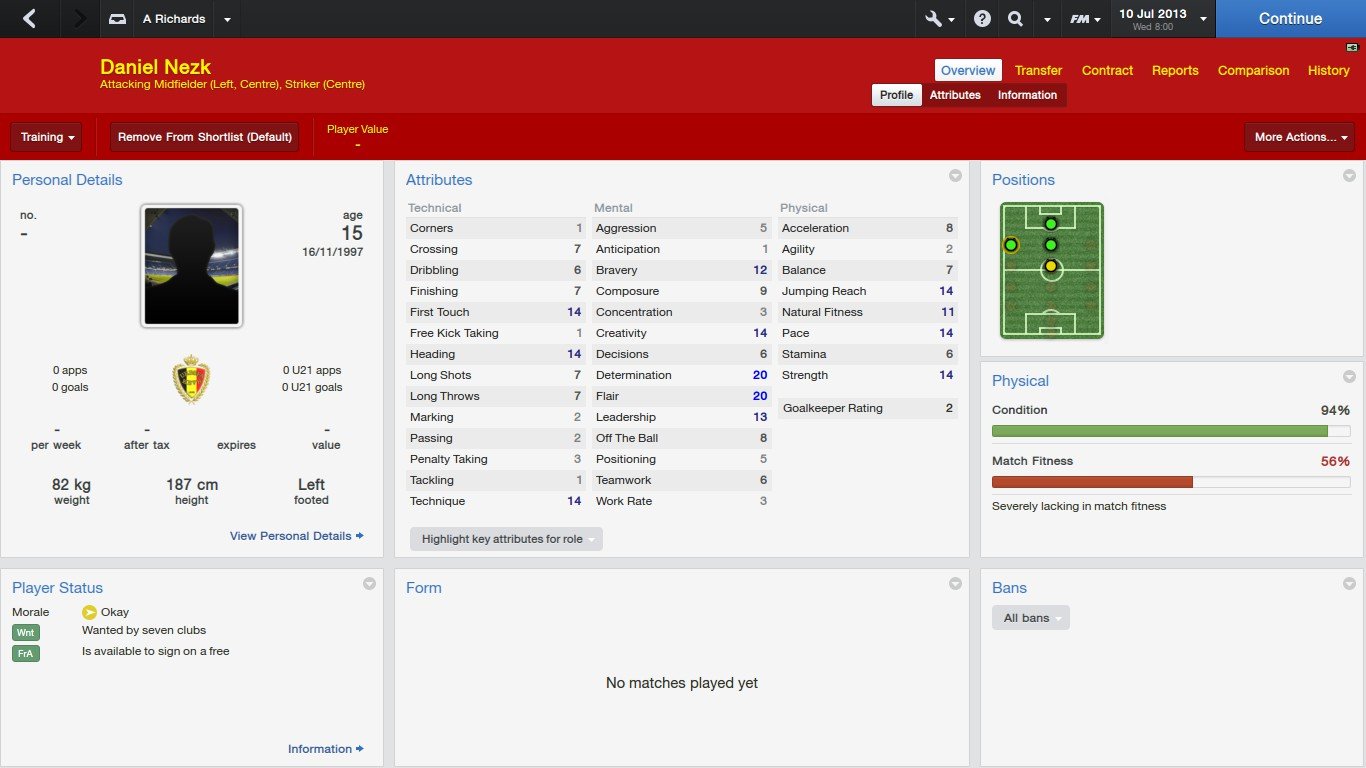 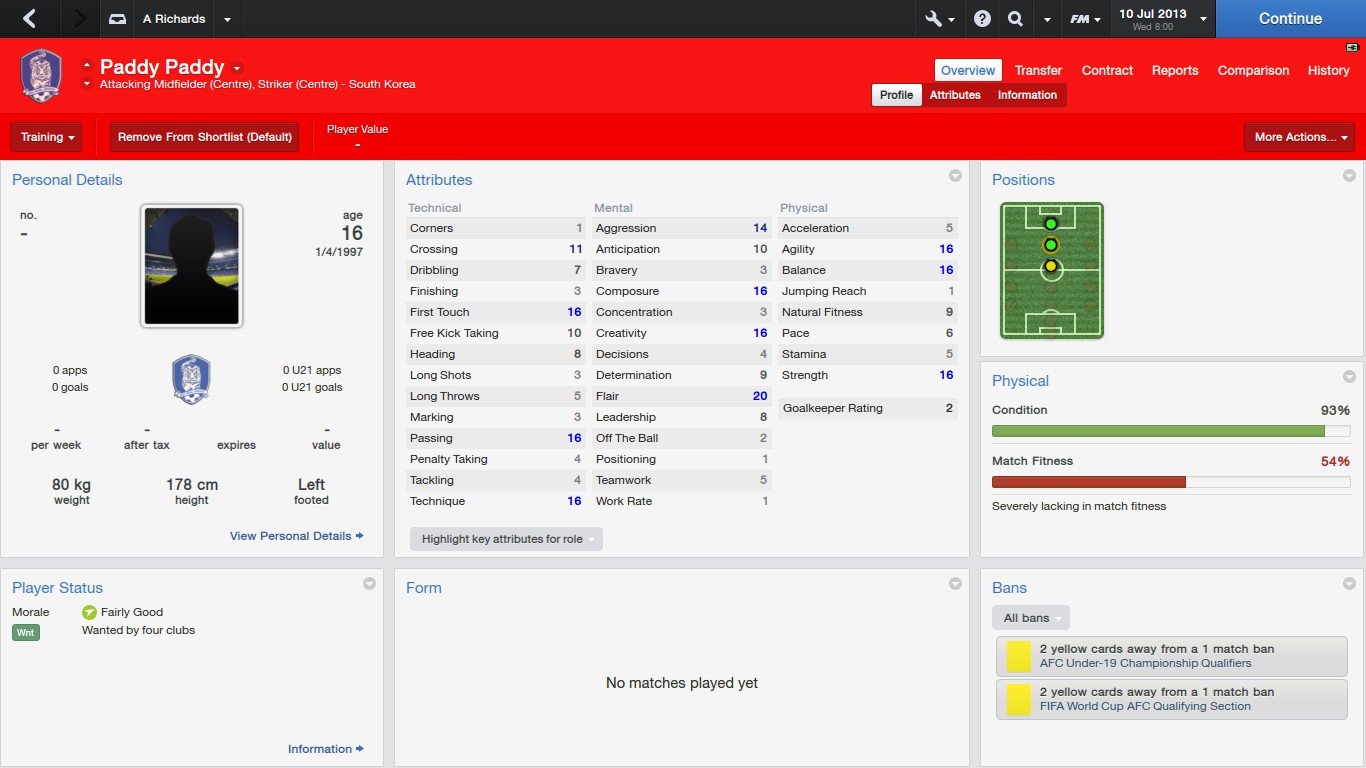 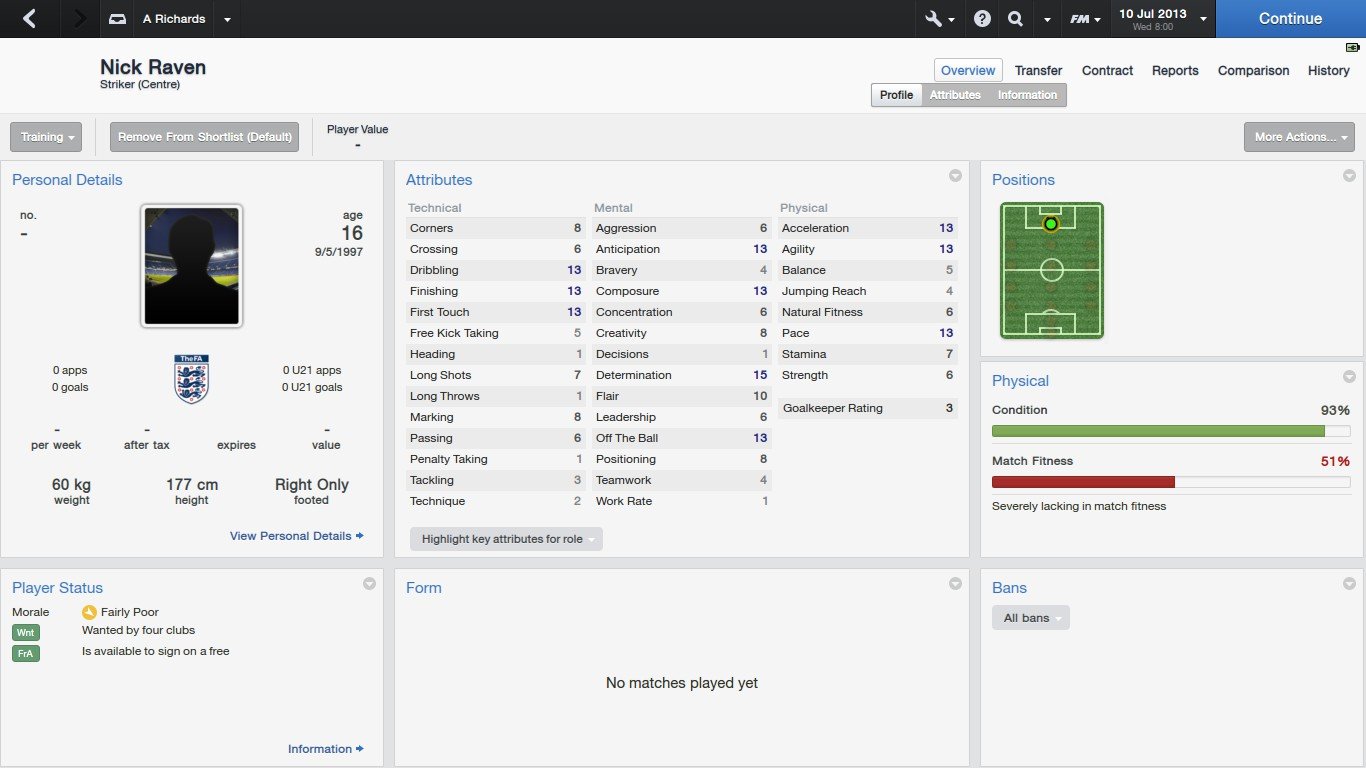 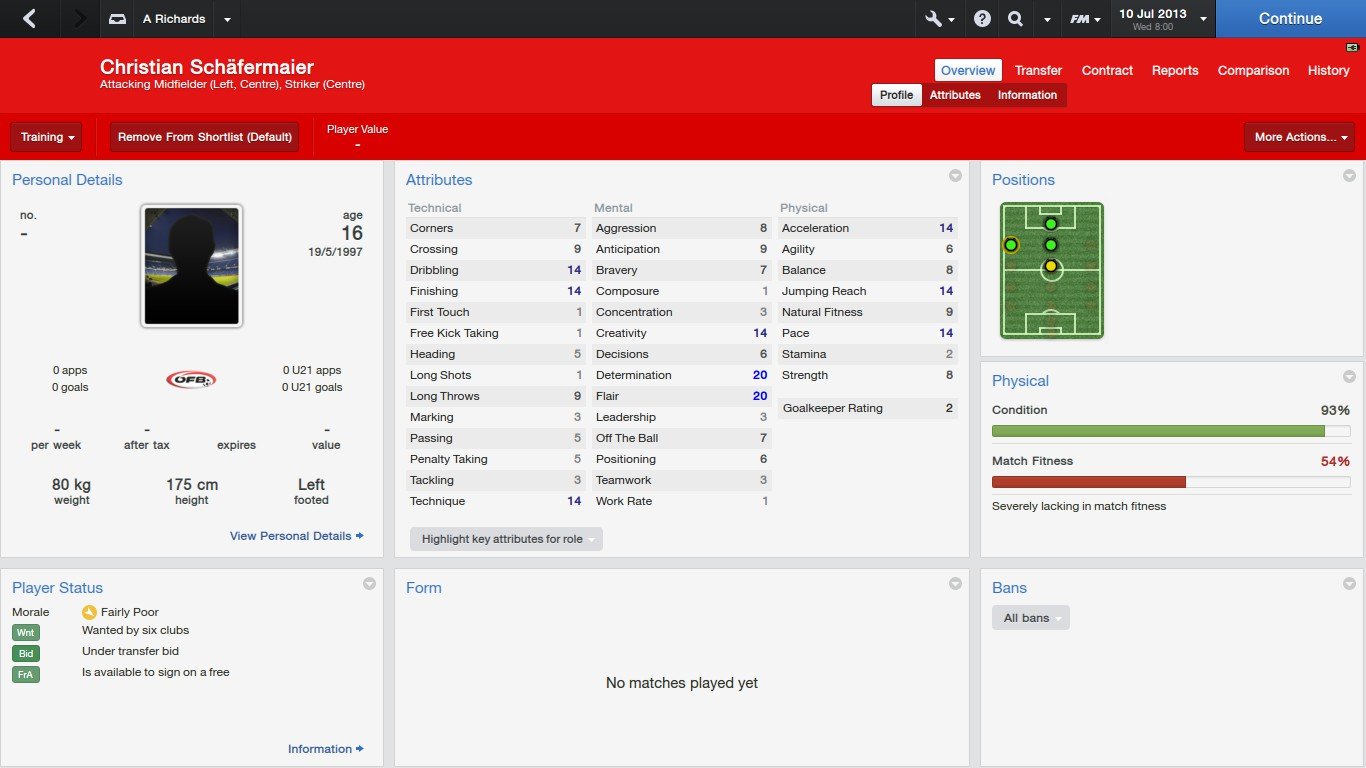 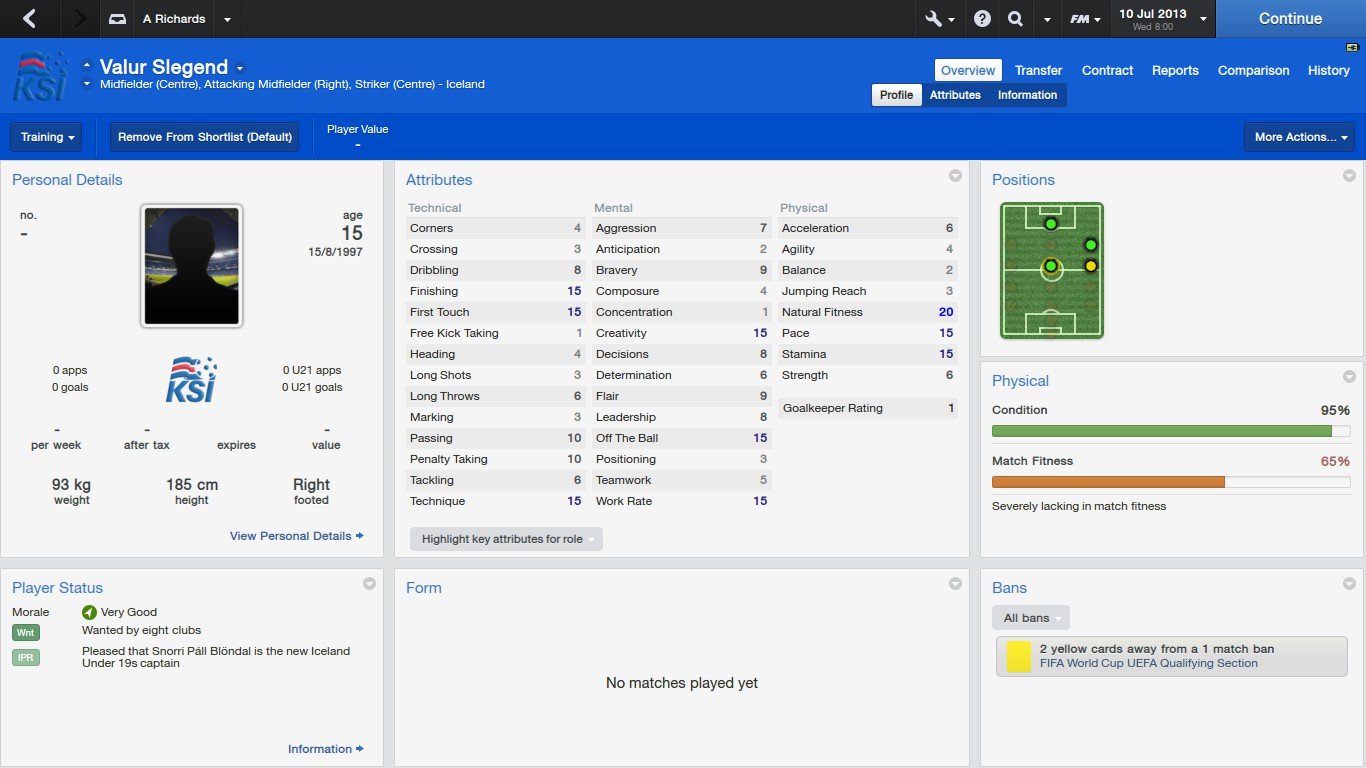 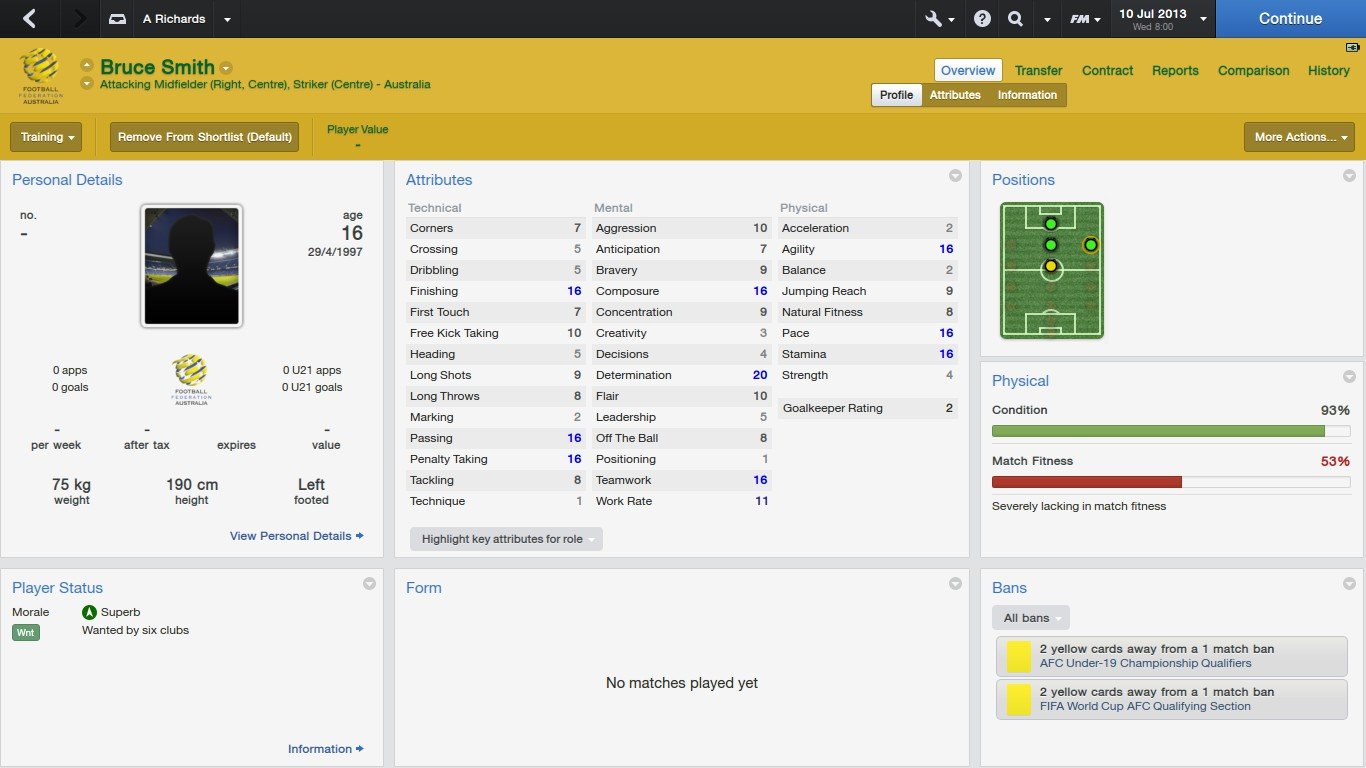 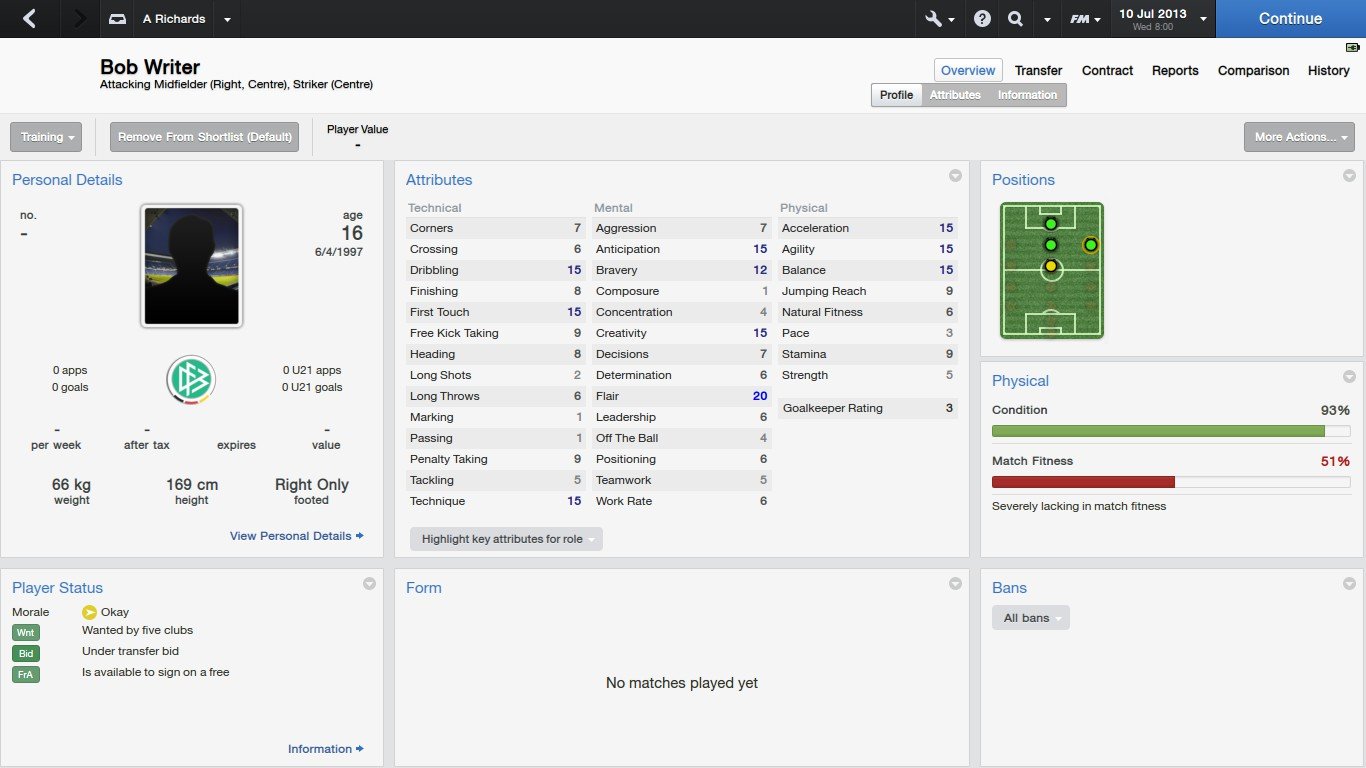 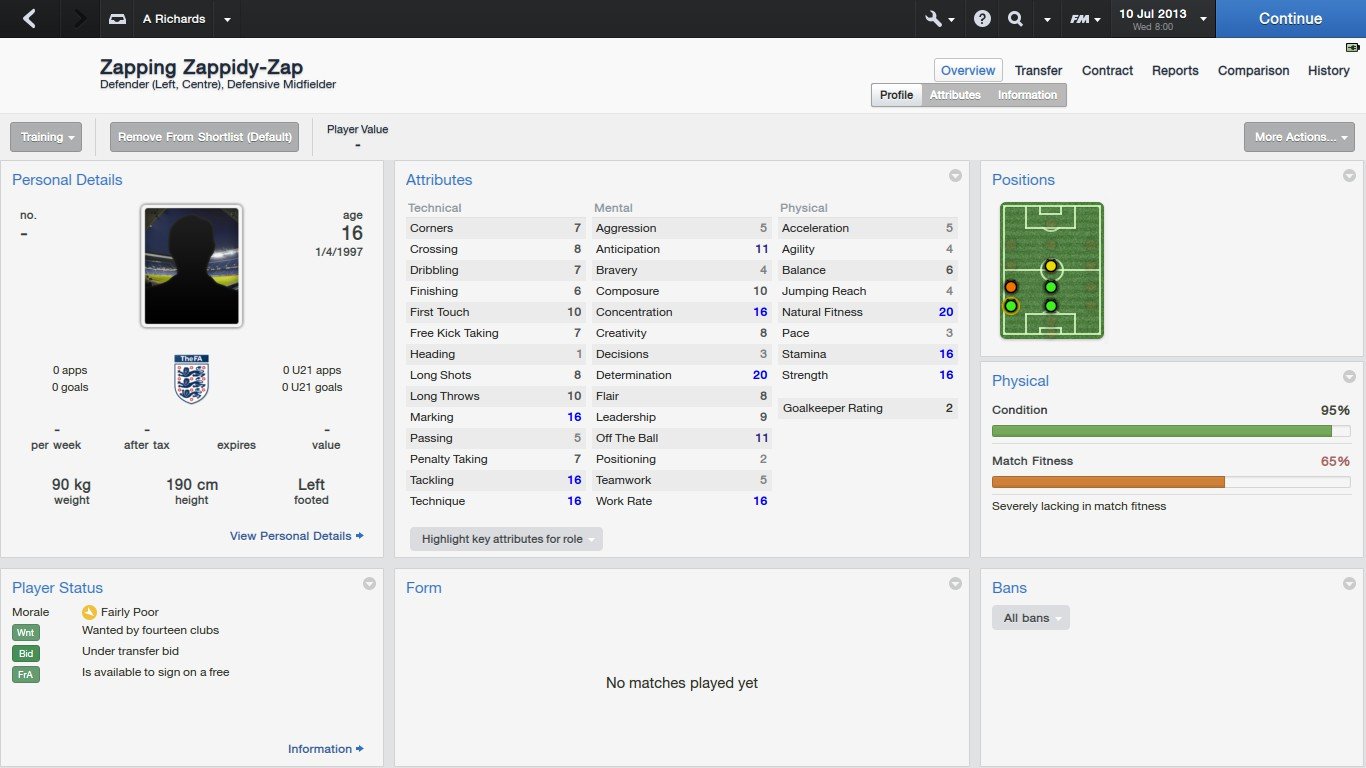 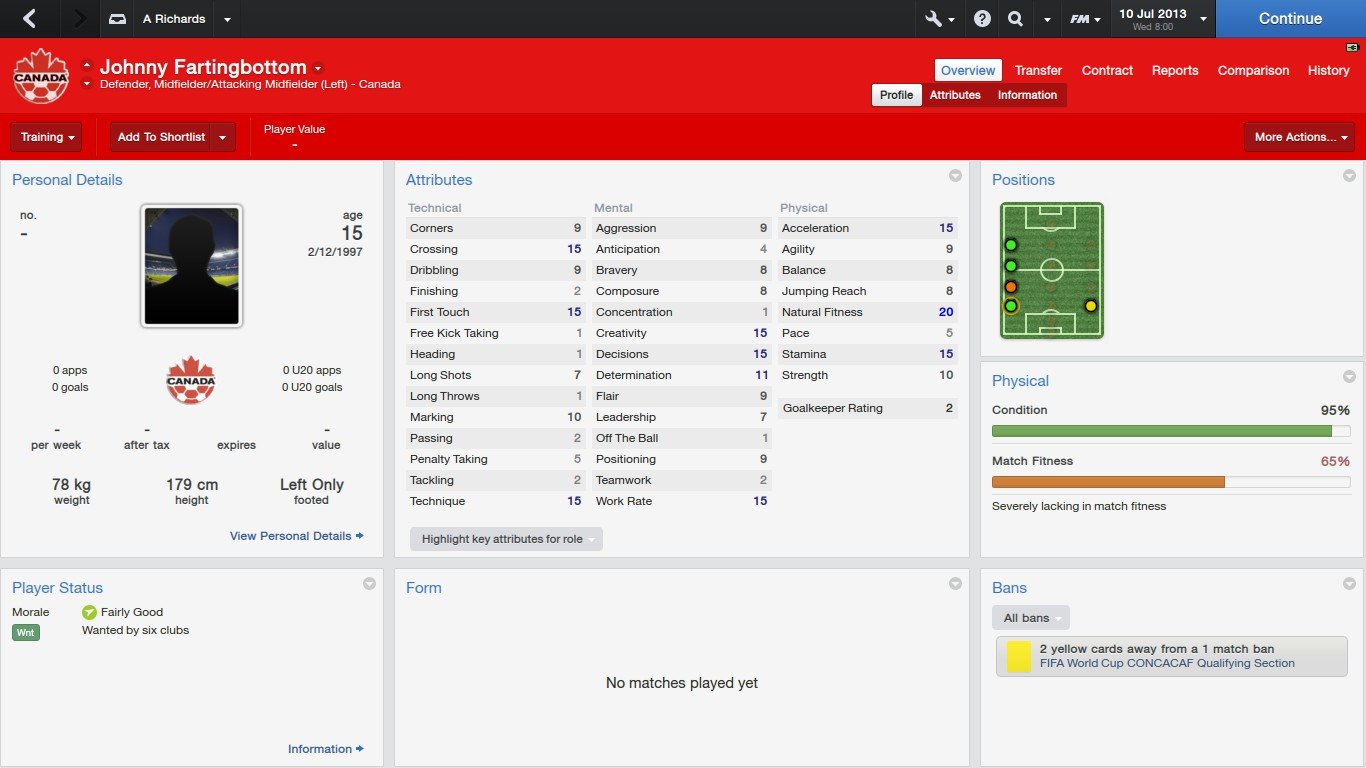 To all those involved, please don't be afraid to write small snippets from the perspective of your player. It will really add to the story! Thanks!
Login to Quote

PJGrieve7
8 years
My guy is a bit aggresive;). Looks good:)
Login to Quote

- Players of Wonderkid Central are released into the football world...

- Christian Schäfermaier (Louis O.) signs a three year youth contract with Austrian side AKA Tirol, earning £25 per week. His value has been set as £8,500.

- Matthew Hamilton (zero-to-hero) turns down Sky Bet Championship side, Queens Park Rangers, to sign a £65 per week contract with his home nation club, Brechin. The Scottish League 1 side have snapped him up on a full time one year contract, which will run out in May of 2014. His value has been set at £3,700.

- Scottish League 1 team, Dunfermline Athletic, have beaten the likes of Sky Bet League 2 side Morecambe F.C. and Skrill Premier team Luton Town, to the signing of highly rated English centre back Zapping Zappidy-Zap (Zapdosthegreat). He is the highest paid player of the players in Wonderkid Central, having signed a full time contract that will see him earn £450 per week, lasting two years.

- Nothing happened on this day.
1
Login to Quote

PJGrieve7
8 years
The tension is killing me, I want to see who my players goes to

- Nick Raven (Nick) has signed a two year contract with Skrill North team Hyde. He has accepted a £5 per week contract, but that will rise to £325 per week when the striker turns 17. The fans have welcomed the new signing and hope that he can break into their team early. Raven was a reported target of Premier League sides Norwich City and Stoke City, but none of them showed any signs of responding to the reports. He is valued at £15,000.

- The agent of Philip Grieve (PJGrieve7) has announced that his client has signed a two year deal with Skrill Premier side Cambridge United. He will be earning around £80 per week, with the midfielder turning down his new sides league rivals Chester and Macclesfield Town, and two teams from divisions below. He is valued at £16,250.


- Canadian fullback Johnny Fartingbottom (jasonvilla4ever) has turned down Turkish sides Trabzonspor and Eskişehirspor, and Italian team Sassuolo in order to sign for Bursaspor. However, the deal will not go through until January 2016, which will leave the player without crucial experience to his name. When the transfer is completed, he will earn £210 per week.

- German forward Bob Writer (TVDLC123) has signed for his first ever club. After rejecting two sides last week, things looked to be on the downturn for Writer, but he has now agreed to contract terms with semi-professional German side Rain. He will be earning £25 per week on his two year contract until his 17th birthday, when he will get a wage rise to around £425 per week. He is valued at £4,300.

- Scottish midfielder Rhys Forrest (TodayAtTomorrow)has signed a two year contract with Forfar Athletic in the Scottish League 1. He will earn £160 per week and the Dunfermline supporter will hope that his new club will be a stepping stone on his way to success in his career. He is valued at £4,900.

- Nothing happened on this day.
1
Login to Quote

MattZTH
8 years
What is my guy doing, Going to brechin over qpr, i guess he wanted 1st team football. Good start anyway
Login to Quote

Im pleased with my move to brechin, QPR was just to far for me to travel at sucha young age and my family probably would'nt want me going anyway, They will think its 'to dangerous' besides at brechin im close to home and am getting some cash for the weekends so all is good.
Login to Quote

Joe
8 years
Just seen my player, and must say he looks brilliant

. Hoping those 11 clubs that want me are top ones (as they should be

You are reading "Wonderkid Central v3! - The Story".