Louis O.
8 years • Edited
Hello everyone! It's been a while since I ended my last successful story, Eintracht Braunschweig - Alles Oder Nichts, and after that I had one short-lived Netherlands story with the legendary Johan Cruyff as manager. Here's the thing. I loved writing the updates in that style and wanted to keep doing similar updates, though slightly different (and not as long!) for my next story. I was wondering what kind of story to do, and then when I asked Trop(Tropnox, as he was then) for a Stuttgart banner with a witty title just for fun, I realised - my Apprentice Stuttgart save had gone well, and I could make a story out of that. But then again things all changed when I decided to read Neal's story, in fact both of them, and thought - I want to update like that too. So then I thought back to my old story plans to see if I had anything to compensate for that. I remembered I had a title idea of Dinamo Kyiv - Bring Your Dinner and since BayernAmerica had just given me a great Iron Curtain database, with the USSR, GDR, Yugoslavia and Czechoslovakia. But I decided against this, and thought back to an even earlier plan inspired by an FM12 save with Icelandic no hopers Bí/Bolungarvík. They had a diverse range of players including a Nigerian forward named Tomi Ameobi. A quick check revealed he was indeed Shola's brother, and then when Sammy Ameobi broke into the first team at Newcastle (or rather the bench at Newcastle) I had another idea, inspired by a story that was going on when I first planned it, the two manager brothers story by an Italian member named Gambit. He was managing both Real Oviedo and A.C. Milan in one save, so I thought back to FM11 where I had about 12 managers and FM12 where I found Tomi Ameobi. I pieced together all the ideas to create this.


So, let's meet the 3 Ameobi's. I have simmed to 2028 and that is where the story begins, so all 3 of the brothers' playing careers have finished. Let's have a look at how they did in the remainder of their footballing careers. 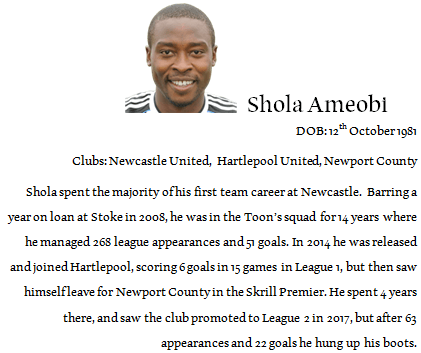 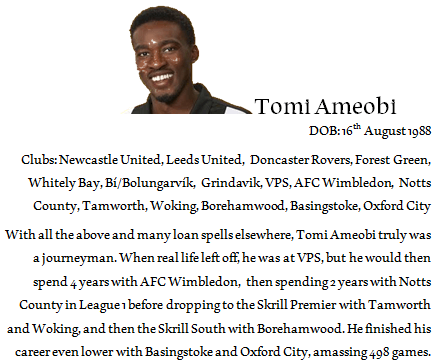 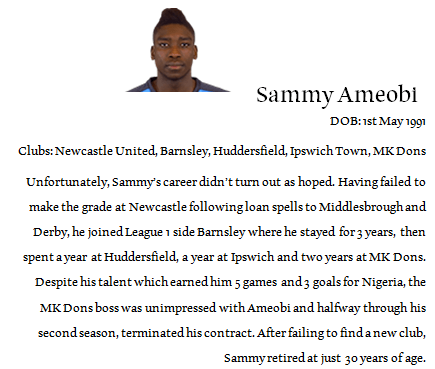 So how will this story go? Here is a description of the basic formats of the updates.

Each update for Shola will be done in news report style like most stories on the site. All signings will be announced this way as will results and opinions.

As the least well known of the brothers, Tomi will most likely end up at the smallest club. No journalists will be interested and so this will be recorded as Tomi sees it.

Much like Jamesg237's style of story writing, this will focus on screenshots and give brief, unbiased descriptions of results. Transfers will also be dealt with this way.

ARSENAL_ruleZ
8 years
Very unique idea. I like the different styles for each Ameobi. I will follow this story

Aaron
8 years
This is a very different way of writing and i hope you can pull it off! Good luck mate:)
Login to Quote

Neal
8 years
Interesting idea, can't wait for you to start!
Login to Quote 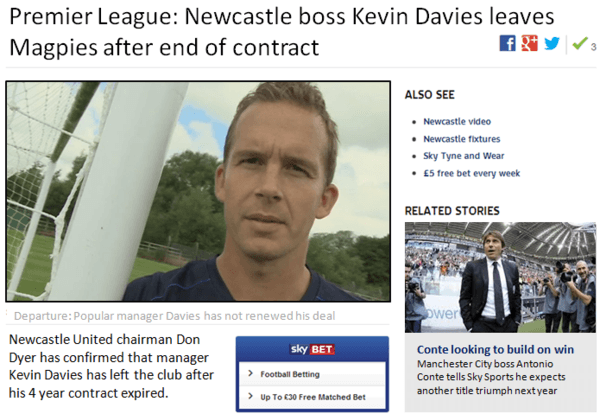 The 51 year old had been in charge at the Toon since 2025, having joined the club midway through the 2024/25 Premier League season after the sacking of Andre Villas Boas.

He failed to keep the club up and they were relegated in 19th place, but under his leadership the Magpies lost just 7 games as they stormed to the Sky Bet Championship title, the 4th time they had topped the second tier. Davies successfully distanced the team from relegation as they finished 16 points above the drop in their first year back, finishing 13th.

The next season was tougher, with a final day victory at home to Hull securing 16th place, 6 points above relegated Swansea.

The job was not Davies' first in management, however. The former striker retired after numerous years with Preston North End, and began his managerial career with Mansfield FC in 2016, but after winning the FA Trophy in 2018 he took over his former club Bolton Wanderers in League 1.

The Trotters missed out on the playoffs in his first season but were promoted via the playoffs next year after a 4th place finish, though Davies left for Queens Park Rangers.

He saved them from relegation to the 3rd tier but after 3 consecutive mid table finishes he was sacked. He was offered a job at Crystal Palace in 2023 and spent two years there before replacing André Villas Boas at Newcastle.

The club did not release an official statement regarding the departure of Davies. It is thought that the club and Davies reached an agreement that his contract would not be renewed.

Chairman Don Dyer said: "I am very sad to announce the departure of our manager. He had experience in the lower leagues and worked his way up to the top of the game.

"I was impressed with his work during his tenure here but the time was right for a change."

"Kevin knows that is still very well respected here at Newcastle, but we reached an agreement and I want to make sure Kevin knows that the club still has nothing against him."

"Finances are in a good position and I have confidence that we can build a great team."

The Newcastle managing director Jamie Webb was much criticised for his decision to set Davies for release.

Sky Sport's Chris Kamara said: "The opportunity to bring in a manager with a big name has turned their heads from sanity, disposing of Kevin Davies would be a characteristically poor decision from Newcastle's board."

"I thought they had moved on from the days of Mike Ashley and Tom Davies' consortium."

"This is a bad error in my eyes. They will need to find a good replacement. I hope they do, because they are a big club and they have big players who make the Premier League what it is."

Numerous people have been mentioned as potential candidates to take the job. The club's fitness coach Simon Tweddle was appointed caretaker manager and is one of the favourites to get the job full time. However, former club captain Chris Solly is also interested and is in line to leave League 1 side Blackburn where he is still playing to try his hand at management. Also rumoured to be targets are former Newcastle strikers Shola Ameobi and Alan Shearer.

The favourite, however, remains Reading's Dougie Freedman.
Login to Quote

Walter
8 years
Shola getting the job...? No way in hell

TylerK
8 years
Very nice update Louis, this is going to be a great story!
Login to Quote

I have just got my first job as a football manager! I have accepted a job at the Swedish club BK Forward in the Superettan. It will be a challenge, because it is my first managerial job, and I don't speak any Swedish and I take over from a local hero, who played for Forward between 1998 and 2003, and managed them from 2017 until this month. I was appointed a week after him, as he was sacked on the 2nd. It's a big job, really. Just one promotion from the Superettan and you are in the Allvenskan with Halmstads and Häcken, Elfsborg and Hammarby. I'm surprised they trusted me with this job, to be honest, but it's a great opportunity for me.

Unfortunately for me, I was taking over halfway through the season. The Superettan season began in March, and Forward drew 1-1 away at Osters IF. Osters is our next match, and my first. They are currently in the relegation play off spot in 13th after 16 games. 14 games remain, and Osters have just 14 points. They have managed just 2 wins all season. I would be confident, but, Forward have just 12 points, sitting in 16th place, bottom of the table, having also just won twice. Oddly enough it was two consecutive 2-0 wins back in May. Because of my arrival midway through the campaign, I have no time to prepare. It really is being thrown in at the deep end but I think I can handle it. I have asked my assistant, Hampus Bergmann, to help me out. He knows the players well, and he knows the league and the club inside out. I don't think I can handle everything. I am still learning, and I never played under any top managers in my career. I can't use anyone as a guide. I'm going to have to pick things up whilst I go. That's fine with me, though, because I firmly believe you can learn a lot more from experiencing something than reading about it in a textbook. Hampus will be taking care of team talks and of training, because I know that things work differently here in Sweden. I can tell that already.

The club does not have the best squad I've ever seen. Hampus sent me a squad report, and now I at least have a basic knowledge of the players. Obviously, I have controlled a few training sessions already, and a few players immediately stand out. Our forward Mikael Rubin can be one of the Allvenskan's best players in a couple years. He's 22, and having come through Forward's youth system, he is a loyal guy who loves the club. Another great player is Matthias Lundholm who has the potential to be the best player at the club - if he isn't already. He's a 22 year old right back signed from Trelleborgs FF two years ago, but he's a key part of our defence which is our strongest area. It's just my luck that he will miss the Osters IF game through suspension. Even more annoyingly, our best centre back Andreas Wendel will miss 4 weeks with a sprained ankle, and midfielder Teddy Berglund will be out for the rest of the season with knee tendonitis. He is an important player and one we very much need. I don't think it will be easy to cope without Berglund. His back up, Petar Younan, is recovering from a hernia, and should be back soon, but will miss the Osters match. The club is down to the bare bones before we've even kicked a ball under my tenure.

Now I need to pick the team to play Osters. Young goalkeeper James Ståhl has just been appointed the new captain. I hope he can lead us to victory. It will without doubt be the most important game of the season. And I can't wait.
Login to Quote

k1rups
8 years
Good luck with the new team! Could be tough but great writing as always
Login to Quote

Jozef
8 years
Great start Lou, good luck at BK Forward and after hearing your angry rants around the house, I think it's safe to say you'll need it.
Login to Quote

You are reading "There's Only Three Ameobis!".