pompeyblue
8 years
Great to have some legends within your staff and it looks like you have a good squad too!
Login to Quote

jason_connolly1987
8 years
AAN - I know mate, couldn't believe Yepes came, gonna be a rock at the back!

Pauker - You always know the right things to say you big flatterer you! Haven't seen him, must check after work!

Walter - Cheers pal, really want to buy the away shirt that Sherman is wearing but can't find a medium online anywhere....Any ideas where I could get my hands on one? Lol

Looks like a knock-off but that is the best I could find.
1
Login to Quote

Going out for drink or 5 with your backroom staff should be interesting!
1
Login to Quote

So, the season was starting to get underway and my first competitive game in charge was the First Leg of the Colombian Super Cup away to Millonarios.

We warmed up with a few friendlies, experimenting with formations and players and came through it with a couple of wins and a draw.

Next, it was on to the big boys.

I'll admit to be nervous in the week leading up to the game.

The night before, I lay wide awake in my Bogota hotel room running through everything…

Before I know it, it's 7:35am and I have to be up to meet the players for breakfast in 25 minutes.

There's a good buzz amongst the group, Rene being his usual effervescent self, joking around, being the centre of attention.

Juan Pablo, Mario Yepes and Diego Arias sit separately from the rest at the 'veteran' table while Bonilla, Sherman and the younger lads are in stitches at Higuita, while he of course laps up the attention.

We have a quick session in the gym, have some lunch and board the coach to the stadium.

37,629 people filled El Campin Stadium to the brim - a complete sell out.

The media and bookies had us as underdogs, large in part to me - the inexperienced manager on the bench.

I set my stall out, named my team in a 4-1-2-1-2 formation and told the lads to do what we'd been doing in training, intricate, one-two touch football. Pass, move, find space.

We set up quite defensive minded, being the away side as we had plenty of pace to hit Millonarios on the counter.

We lost Crystian and Duque to injury in the first 20 minutes, replacing them with Angel and Railan - not an ideal start but the team rallied and Railan played a big hand in our opener.

His lung bursting run down the right flank found him in space, pulling back for Cardenas to slip through Uribe, who rounded the 'keeper and tapped home.

The goal seemed to suck the life from Millonarios as we pressed for a second.

Sure enough, Fernando Uribe popped up on 42' to head home a left wing cross from Valencia.

The team went wild, our little section of 1,800 travelling supporters, even moreso..

I told the guys to keep it calm, steady the ship.

The second half was a drab affair, Millonarios looking tired and void of ideas, while we stroked the ball around without really creating, after all, taking a 2 goal lead to Medellin was more than we'd hoped for.

The whistle went and there were hugs and high fives aplenty… We'd done it.

Always great to get a win against Millonarios
Login to Quote

Always great to get a win against Millonarios

Definitely mate, the fans loved it

With Cristyan out for 8 weeks, Railan starts at right back and on loan Boca Juniors striker, Martinez starts beside first leg goal hero, Uribe. 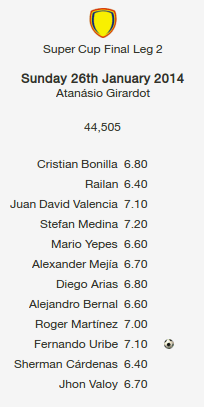 It took 7 minutes for us to take the lead, Uribe again the hero, drilling home from outside the box following good work from Arias.

We stuck it out, 3 goals to the good on aggregate and brought the Super Cup home in front of 44,505 fans in Medellin.

My first 'senior' trophy picked up against one of our fiercest rivals.

My first foray in to the Copa Libertadores saw us drawn in a pretty tough group as we face trips to Brazil, Uruguay and Bolivia.

Must say, you've been handed a tough group, with Penarol and Bolivar being the best teams in their countries.. but I wouldn't be surprised if you managed to get through, good luck!
1
Login to Quote

The Super Cup win seemed to install a wonderful confidence in the squad, from the fans to the coaching staff to the counter staff in the club shop - everyone bought in to what we were trying to do and it showed on the pitch.

A perfect start to the season followed as we picked up maximum points in the league, Colombian Cup and beat Bolivar in the Libertadores. 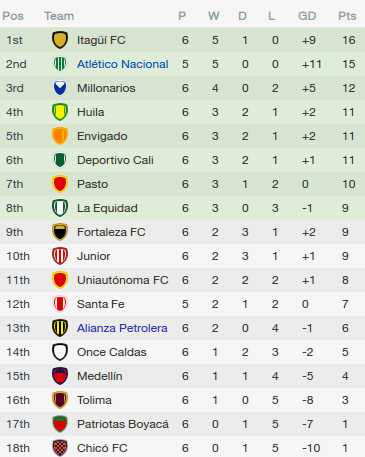 7 wins from 7 following the games against Millonarios with 17 goals scored and only 4 conceded.

Maybe I'm good at this.

Mr. Shjanzey
8 years
Amazing result! Most of those wins were against top table teams. This team is going to be fearsome!
1
Login to Quote

Walter
8 years
7 from 7! BRilliant start to the league and the CL with the win over Bolivar.
1
Login to Quote