InvertedWingbacks
8 years
Mark O'Hara mate, starts off at Kilmarnock, moved to Arsenal in my save for £2.8m
Login to Quote

InvertedWingbacks
8 years
thanks mate! I'm a wee bit ahead in the save, but i'll catch up soon, been doing a fair bit of uni work
Login to Quote

Scotland firmly established themselves as a team to be approached cautiously, as they qualified from group B with a game to spare in Brazil.

While many predicted that Scotland's time at the world cup would be short-lived, they came out all guns blazing, and blew the group, and the world's perceptions of them, wide open, with 2 wins and a draw in a group which should have been tough for them. 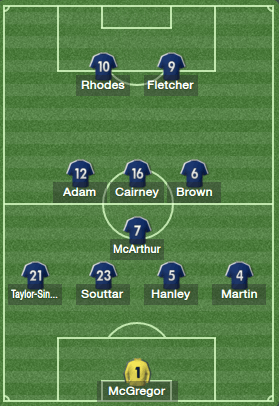 At first glance, this is a Scotland side which looks promising on paper, but when you look closer, John Souttar and Tom Cairney are perhaps not the most solid players to be building a side around, but both are starting.

Scotland came into the match with the intention of shutting down Mexico's attack, and getting forward where possible. It was a good strategy, which limited Mexico to 9 shots over the entire game, an echo of the playing style throughout the qualifier. However, unlike their qualifiers, Scotland could not carve out any chances for themselves, until the 72nd minute, when Steven Fletcher netted the opening goal with a powerful effort from the edge of the box. 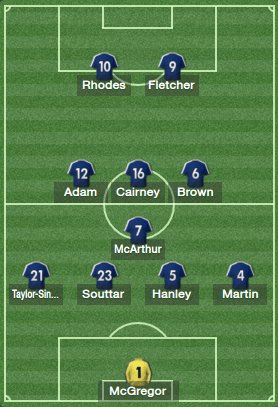 For the second group match, Miller named an unchanged side, and was clearly hoping for a similar performance.

Once again, Scotland looked to be trying to shut down the South African attack, and when Tom Cairney put the Scots ahead, the plan looked to be working. However, after a poor tackle from young centre-back John Souttar, the South Africans equalised from a Davide Somma penalty after 20 minutes.

From then on, the game was equal, with good passing and movement from both sidees, but neither could produce a good final ball. We looked set to be heading for a draw, until Jordan Rhodes spun his defender after a long ball from Russell Martin, and hammered the ball home from close range, despite protestations of offside, which replays showed were without merit. 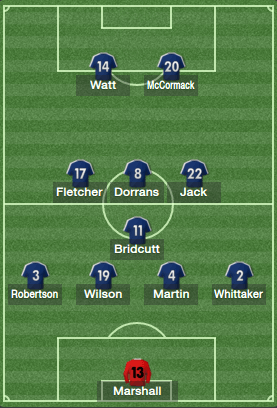 With qualification sewn up, Miller rotated his squad, playing 11 totally different players to those who featured in the previous two games.

The Scots took the same approach once again, keeping the ball and moving well, shutting down the Australian attack. However, Scott McDonald undid the entire gameplan when he scored from the edge of the box after 11 minutes.

Seemingly unwilling to see the game out of their reach, captain Darren Fletcher started playing with more attacking intent, and the entire team responded while manager Willie Miller nodded his approval from the sidelines.

9 shots on target, and 41 minutes later, Scotland were level, Tony Watt converting a penalty kick, to the delight of the Scottish fans. From then on, the game died out slightly, and Scotland went through to the second round of an major international tournament for the first time in their history.

Brazil Crash Out of World Cup

Scotland continued their remarkable rejuvination under the guidance of Willie Miller, sending hosts Brazil crashing out of the World Cup in a shock 1-0 win.

Before the game, nobody gave the Scots a chance, and indeed many thought that we would see a cricket scoreline, rather than a football one. The Brazilians though, had finished second in Group A, behind the Czech Republic, after a 3-2 defeat to Senegal, a 2-0 victory over Iran, and a goalless draw against the Czechs.

The Scots came out for the match with a more attacking outlook than had previously been seen in the competition, while also looking to negate the attacking power of players such as Oscar and Leandro Damiao, while Neymar and Hulk remained on the Brazilian bench. It was a plan which worked, and Scotland reaped the benefits.

After 37 minutes, some lighting-quick passing in midfield saw Scotland dangerously close to the Brazilian penalty area, where James McArthur sliced the Brazilian defence open, and Graham Dorrans lifted the ball over Jefferson to put the Scots 1-0 ahead.

The Scottish fans were by far the happier at half time, and they came very close to drowning out the home support with their rendition of 'Loch Lomond' over the break. Willie Miller kept the same side after the restart, although several players were seen warming up, including Ryan Jack and Tony Watt.

The second half was uneventful, with Scotland keeping their defence tight and snuffing out the Brazilian attacks before they could really start. The home support was clearly frustrated, booing their players off the pitch at full time, while the Scots ran straight to their fans to celebreate. 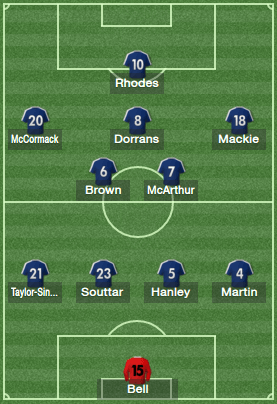