This is something new and i hope people find the idea interesting, if you don't 100% understand the whole concept you will after i post the first segment of this project.

I will be testing out how players preform for the team who is rumoured interested in them in real life, i will go over their stats for the season and how they've developed, i will be doing 2/3 seasons for each player to give them time to settle in and progress.

AlexTHFC
8 years
Nice idea, make sure you do Lukaku to Tottenham

polynike
8 years
yes and Moyes out as well please ;0
Login to Quote

Team Lift
8 years
@AlexTHFC - Nice idea, make sure you do Lukaku to Tottenham ;)

- He is first on the list, obviously it will take time to update due to me having to sim seasons but so far so good, thanks aswell

@polynike - yes and Moyes out as well please ;0

- As im using the In-Game Editor i cannot change managers but i will certainly learn how to use the normal editor and get Moyes out and test Carlo Ancelotti maybe ?

- Isco to liverpool seems very bizarre to me but ill certainly write it down and give it a go, aswell as Jerome Boateng but he is also linked with Manchester United so we will see

Denzy
8 years
Yeah, they've been linked though and who knows, he's not playing Regular at Madrid so maybeee

These are the Belgium Internationals stats before he signed for Tottenham, very young and very pretentious striker, He signed for Chelsea in 2011 and has been on loan ever since, only making 10 appearances for his parent club Lukaku is keen to show Chelsea exactly why he shouldn't been sold in real life. 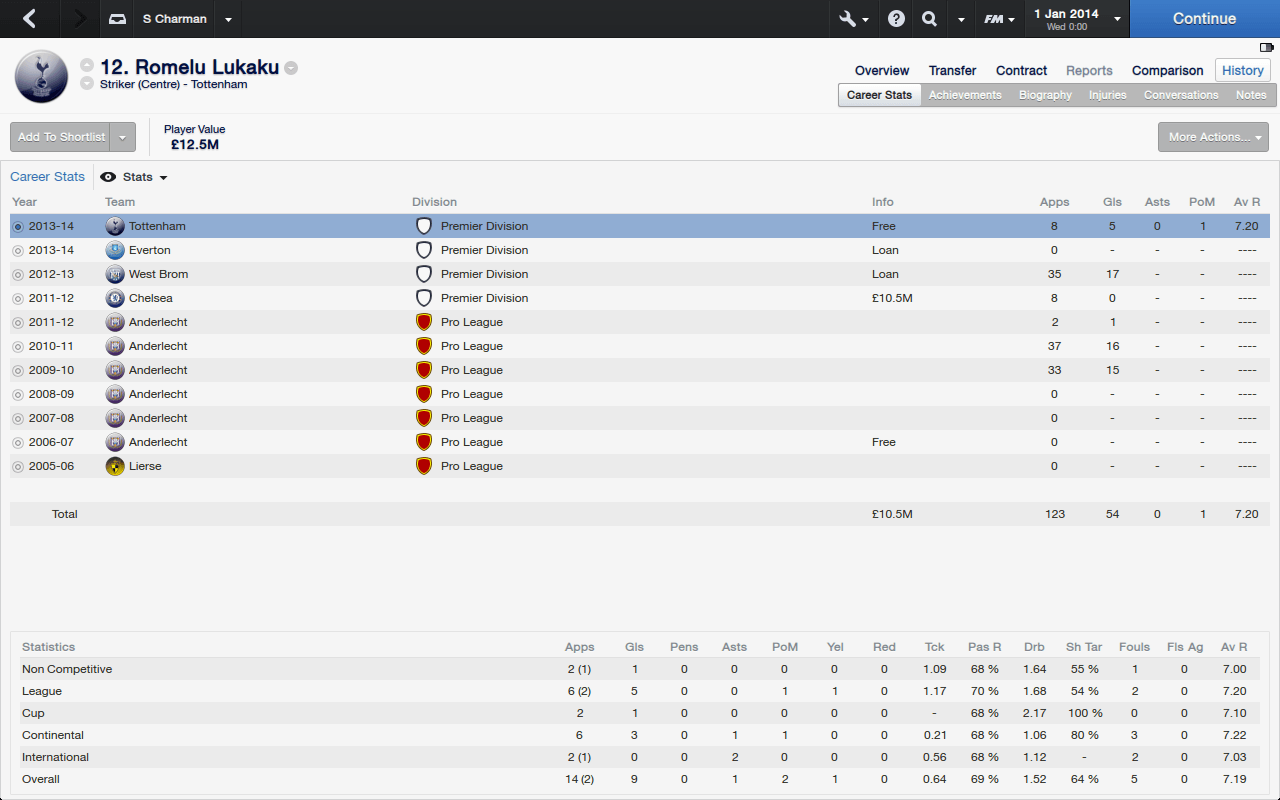 Finally January came along and the Big Belgium has been a regular for Tottenham being their main man upfront, Playing 14 games scoring 9 times assisting once and getting two MOTM awards I'm sure the Tottenham manager is delighted with his new signing.

He's been playing well enough to keep the likes of Roberto Soldado and Emmanuel Adebayor out of the regular starting eleven. 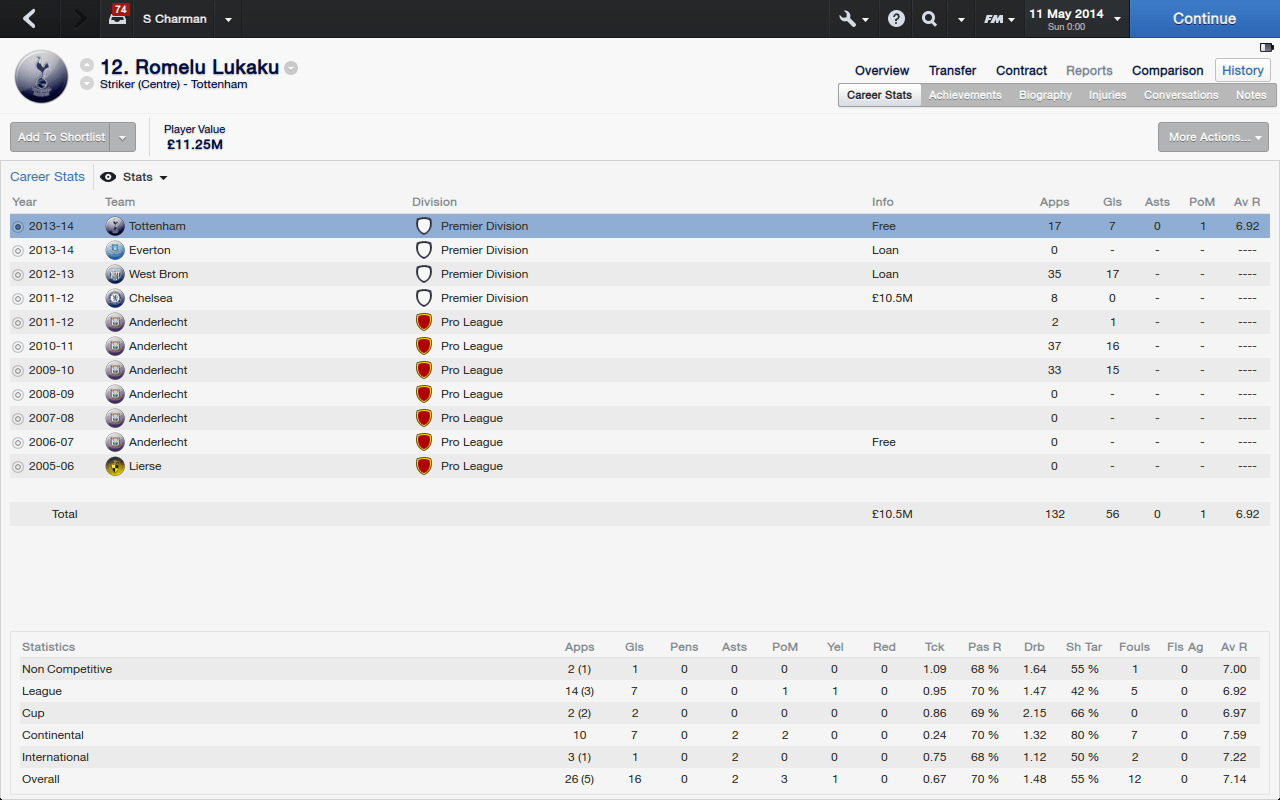 The end of the season has come and Spurs have finished in 3rd on 66 points, you can bet your life Lukaku has had some sort of an impact on them.

Playing a total of 26 games, scoring an amazing 16 goals in his first season for the club and assisting as little as two which isn't quite as impressive.

In january he had two MOTM awards to his name in the space of Jan-May he only picked up another one MOTM awards bringing his total too three Awards which is quite disappointing from my point of view but still an impressive 1st season for Romelu Lukaku.


- I will be updating every season for each player for 3 seasons i think will be best, unless they get sold it will be guaranteed three seasons for sure. Ill show his new stats after the three seasons have finished -

@Denzy - Yeah, they've been linked though and who knows, he's not playing Regular at Madrid so maybeee :P

- Yes definitely anything can happen in the world of football

Mr. Shjanzey
8 years
This is much more enjoyable than I thought it would be. Keep up the good work.
Login to Quote 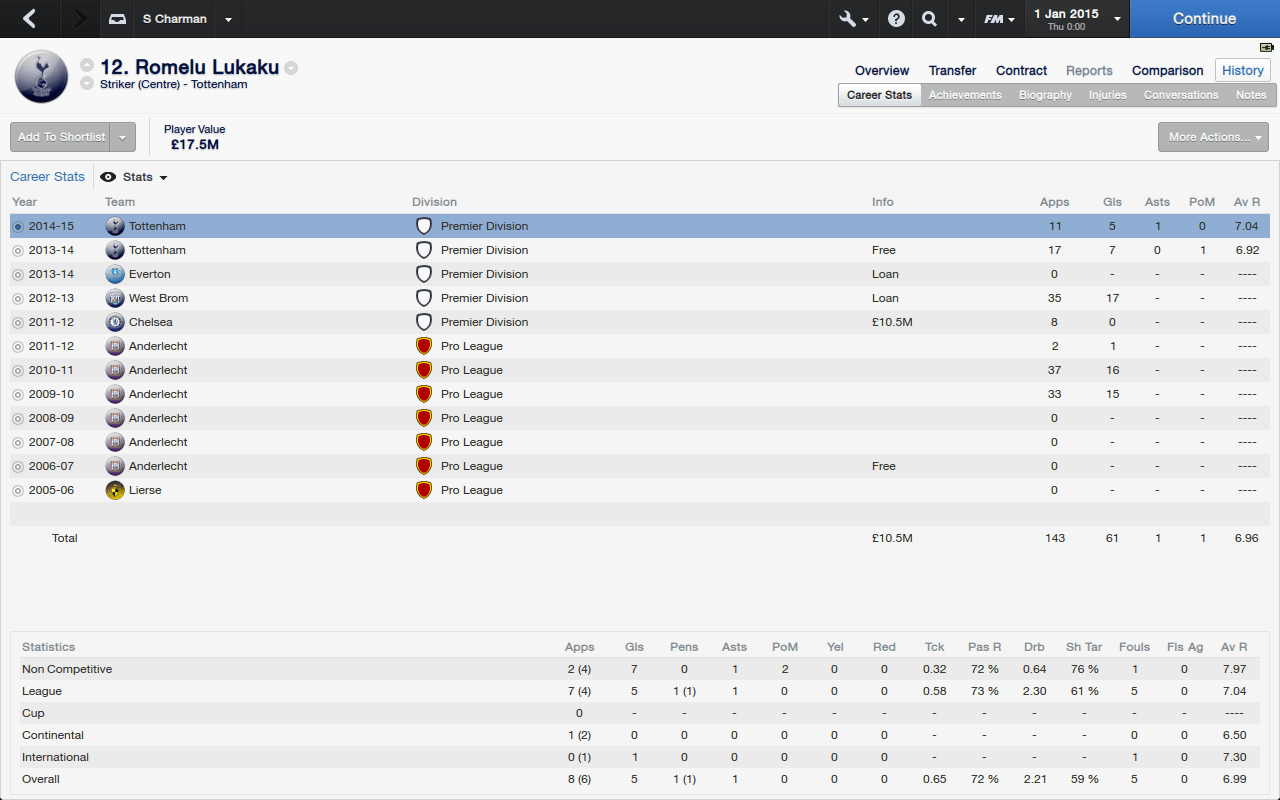 So January 1st 2015 finally came and so far so good for Lukaku playing eleven games and scoring 5 times with an average rating of 7.04 and also assisting once, the Belgium has found himself in the starting eleven very often so far.

Its disappointing to see their main striker not getting himself in the MOTM awards so far this season but I'm almost certain he will up his game for the rest of the remaining season and show exactly why he should start. 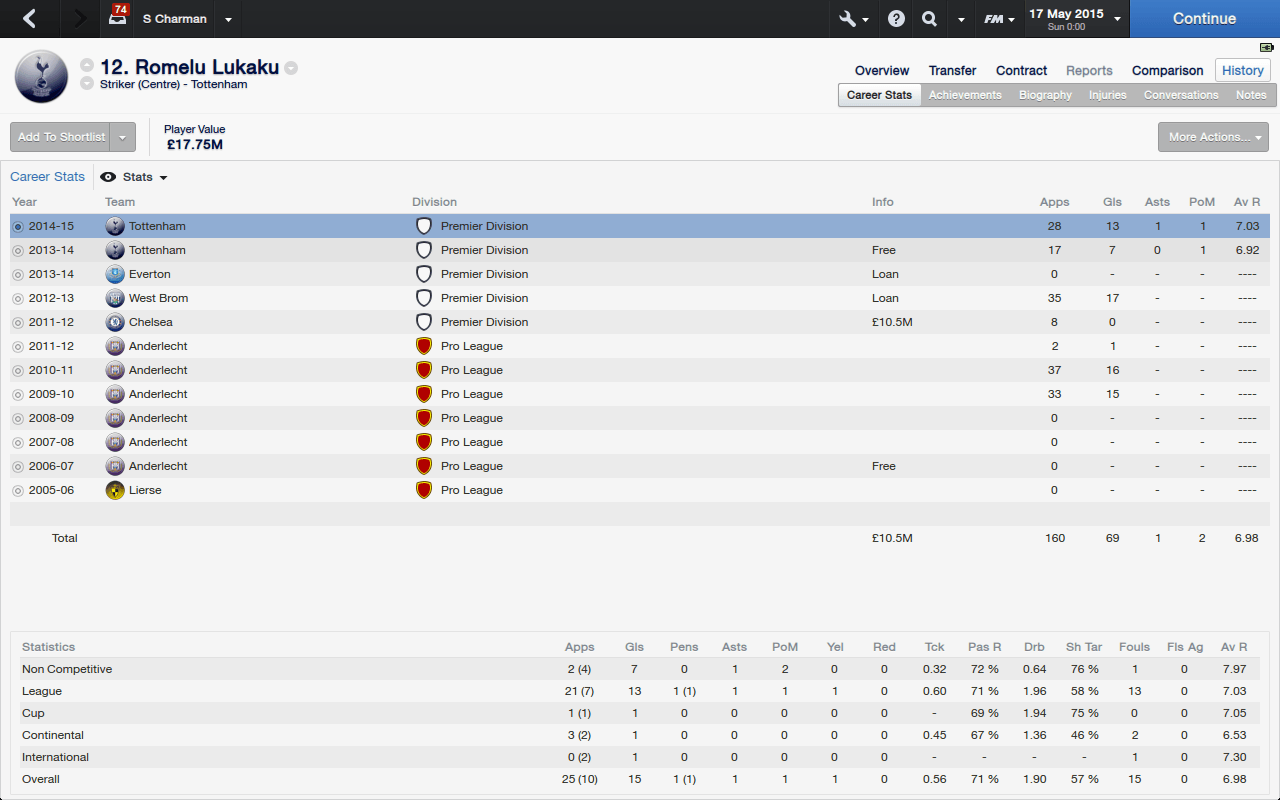 28 Games and hes found himself with 13 goals, 1 assist and 1 MOTM award, the International has had quite a worrying season this year, at this point last year he had 16 goals in 26 games which is a much better ratio.

It is also rumoured Spurs are looking at a high profile striker and Lukaku could face competition for his starting place in the team.

The Striker has also admitted he would be open to a move to Real Madrid and also a move back to Chelsea, which is bizarre, one step forward two steps back.

But openly said he is happy at the club but just couldn't resist the taste of La Liga and spanish giants Real Madrid.


@Mr. Shjanzey - This is much more enjoyable than I thought it would be. Keep up the good work.

- Thankyou very much, im glad you're enjoying it 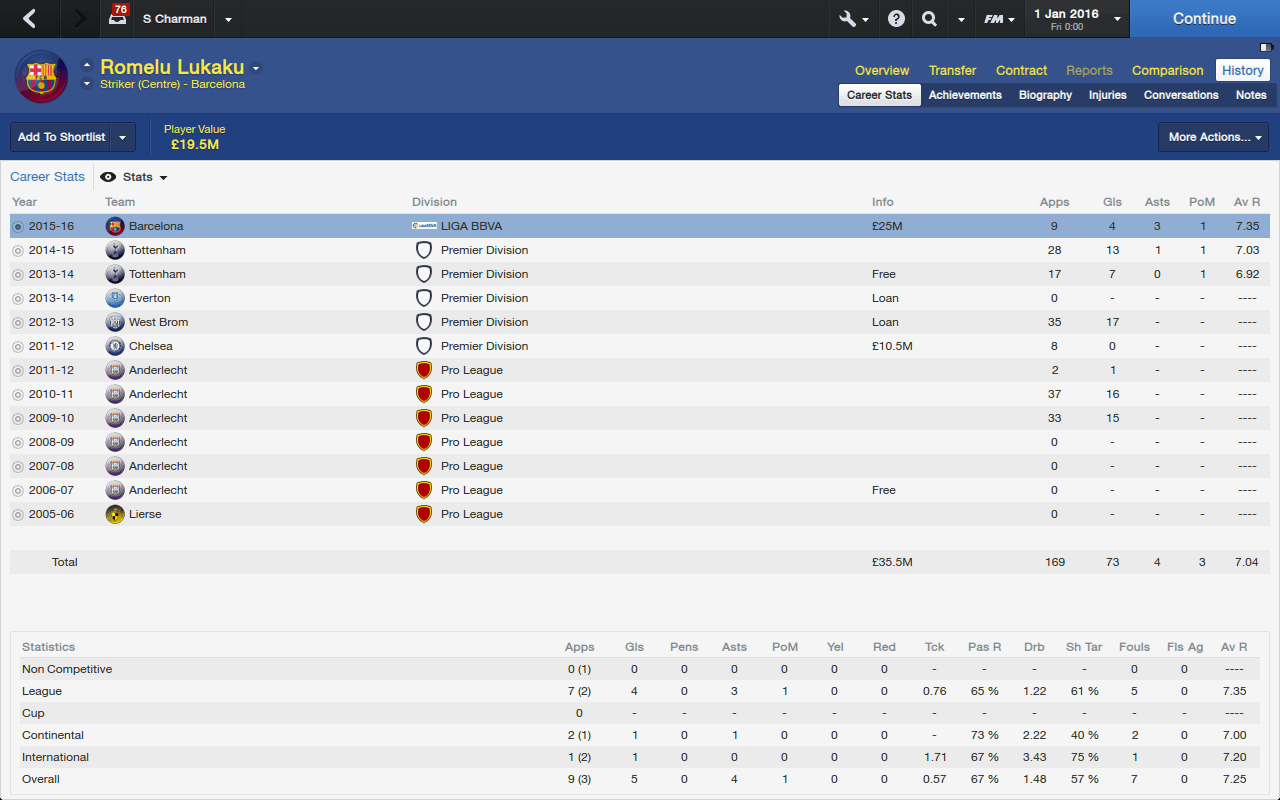 Lukaku has made a shock move to Barcelona after reportedly being interested in joining Real Madrid.

Romelu only being at Premier League club Tottenham Hotspurs for two seasons thought it was time to move on since Spurs finished in a poor 10th place, after having an amazing first season and coming in 3rd place his combined stats were 31 goals an abysmal 3 assists and 4 MOTM Awards.

He's certainly a goal scorer but I'm not so sure he's a team player he could of done better to get his teammates involved more often but choose to but more of a one team kind of guy.

His ability to header the ball is definitely near enough perfect picking up 11 of the 31 goals from his head.

I'm not saying he isn't a team worker for you but he wasn't for me, these notes are from my point of view, you could see them differently but this is just what i think and nothing more

I'll be Doing Adam Lallana and Luke Shaw at Manchester United since they're heavily linked, be sure to name some players you want to see and ill make a note of it, thanks. 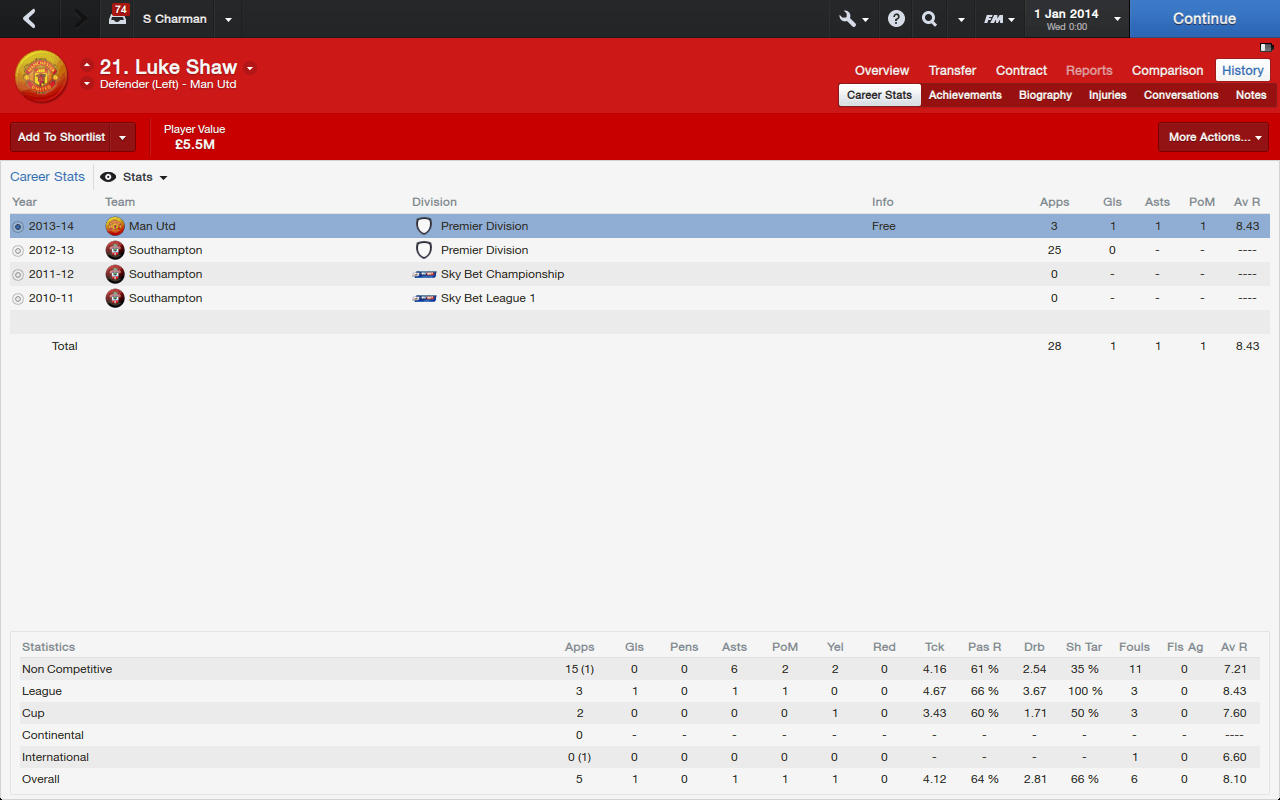 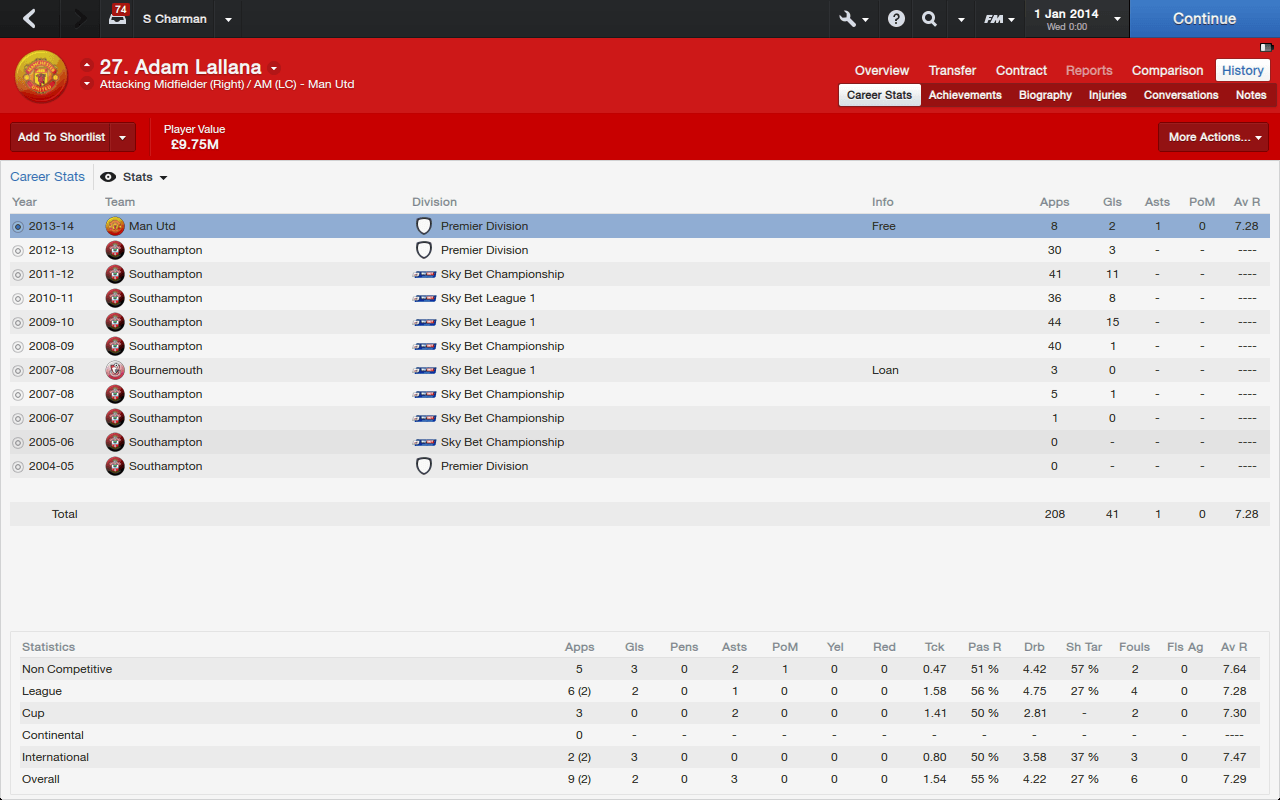 Luke Shaw and Adam Lallana have found it tough so far this season to get into the starting eleven but... When they did they played out their hearts picking up great averages per game and impressing the fans.

Manchester United fans are confused as to why they haven't seen more of their new signings, Moyes said their time will come but for now they need to work for their spot in the team.

Luke Shaw playing 5 games in total has picked up an average rating of 8.43, one goal, one assist and one MOTM award he's been on great form as of late.

Lallana on the other hand has played 11 games in total and have scored twice and got one assist and picking up an average rating of 7.28.

Lallana has also broke into the England squad and has made 4 appearances scoring a great 3 goals for his country but has picked up an injury and is out for 2 months sadly.

Overall they both have been playing great when they've been on the pitch and my thoughts right now is they both can handle the pressure of big teams and still play amazingly they certainly aren't small club players.
Login to Quote

You are reading "FM14 ~ Experiments".