When people think of football in the capital city of France the first club that comes to mind is Paris Saint-Germain. Well there are a few other clubs in the city of lights, Paris FC and Red Star Football Club 93. The two clubs play in the Championnat de France de football National and are semi professional. With the takeover of the QIG people are looking for a club in Paris to be pure once again.

Note: This most likely will be with PFC but down the road I could take another job. We will see.

A few weeks into the search for a new manager Paris FC Chairman Pierre Ferracci has announced the new man. Back in May he sacked Christophe Taine after failing to win promotion to Ligue 2. This hiring has shocked the supporters of Paris FC and there are mixed feelings. One person was quoted on their facebook saying Who?? Another said good to see a young manager who just recently played, he should do wonders for us.

The new man in charge is 29 year old Laurent Bonaparte. Bonaparte is a former professional football player who's career lasted from 1998 until the end of the 2012/13 season. He has played for several clubs including, Paris Saint-Germain and Portsmouth FC.

After a short stint in England Bonaparte would return to Paris Saint-Germain where he stayed with the club until the end of the 2010/11 season he left the club due to the takeover. In a March 2011 article he was quoted in saying,"PSG are my boyhood club, yes I am glad we are getting some help but the money will poison us." Bonaparte finished his career with Ligue 2 side SM Caen.

He represented France many times in both the U19 and U23 squads and he was capped at three times with the senior team.

When word reached Bonaparte that he had been hired he sent out a statement saying, "I am excited for my next stage in my career, it has been fun playing now I get to experience the sport form a different side." He would continue by saying, "My goal as manager of Le PFC is to get the club to Ligue 1 and create a history that generations will read about also I want to make this club better than PSG."

During his playing years Bonaparte was known as a strong leader who would help any teammate when needed. The 29 year old is in fact a distant relative to the former French Leader Napoleon.
Login to Quote

dykie567
7 years
Tried a career with Paris but couldn't hack it. Good luck to you though, it's a tough challenge!
Login to Quote

Tallery
7 years
Good luck with this!!
Login to Quote

MJK46
7 years
Pompey: Thanks
Dykie: Same here it is hard but I am willing to give it my best
Tallery: Thanks
Login to Quote


Today is my first press conference. Well we are Paris FC a club in the third division so you would think a few journalist would show up. Since I am well known and have had baggage that the French Media love to eat up it was packed. Our President Pierre Ferracci was talking and finally he called me out to the stage. All the questions began.

"Mr. Blanc your move to a semi professional club has been meet with lots of critics saying you are stupid and that you will fail like the other three managers that couldn't last season. What do you say to them?"

"Well I feel that Mr. Ferracci's goals seemed reasonable. Look with I did in Bordeaux I want to replicate the same successes with PFC. I have been a target for years by the French Media I am not shocked that you all have such a negative view of me."

"What are your long-term plans for Le PFC, if any?"

"Well in the short run I want to get promoted to Ligue 2 at the end of the season. This will get us to a professional status which will help the club grow. In the future I want to get this club to Ligue 1 and go from there. It's going to take time."

"Will you be concentrating solely on the League, or will you be focusing more on the cup competition?"

"League right now and for the foreseeable future. The cups can wait."

AS4
7 years
This one is gonna be a long drawn challenge mate! All the best

Thanks. I am glad I have nothing handed to me.
Login to Quote

RC Strasbourg Alsace have been made 6-1 favorites to win the league this season. The rest of the main contenders are Amiens SC Football (8-1),USJA Carquefou (10-1), USBCO (12-10 and EFC Frejus Saint Raphael(14-1).

Paris FC who just added new manager Laurent Bonaparte have been priced at 20-1 odds to win or get promoted this season. With this we believe Le PFC are prime candidates for relegation to the CFA this season. 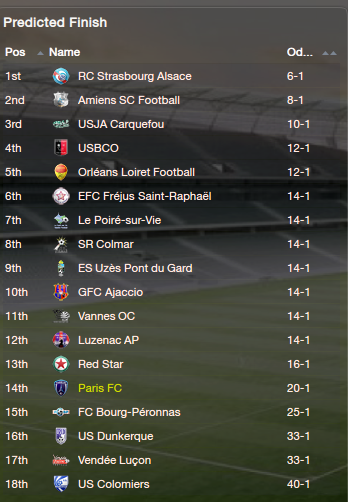 McMonkey
7 years
I will be following this one. I love lower league management. I had really fun game as FC Metz in FM10 where I had a policy of bringing in Senegalese and other French ex colonial players. I think its good to have a vision. Bon chance!
Login to Quote

2014-04-08 04:16#167858 McMonkey : I will be following this one. I love lower league management. I had really fun game as FC Metz in FM10 where I had a policy of bringing in Senegalese and other French ex colonial players. I think its good to have a vision. Bon chance!

Merci!! It should be a really interesting story since my guys background is an ex PSG Player getting revenge on a club who is killing modern football.
Login to Quote

SQUAD INFORMATION
Manager Laurent Bonaparte is pleased to announce the 2013/14 Paris FC squad. Even though there is a month left of the transfer window the club is pretty much set to go. For his first go at the transfer window Bonaparte added five new faces. "I feel each of these men will contribute and get us a chance at promotion," said Bonaparte.

The most notable player to join the club is Goalkeeper Ronan Le Crom who spent the last few seasons as a backup with rival Paris Saint-Germain. The 39 year old was pleased to get a contract in Paris and is looking forward to competing for the starting spot. The club also added Brazilian Everson. With that the 37 year old takes up the second to last non EU spot.

It has been a great preseason for Le PFC. In the six matches the club never lost a match. The two big matches against Bundesliga clubs were very entertaining. The match against Borussia Mönchengladbach will be one to remember thanks in part of a 3-1 victory. "We worked really hard this preseason and got some surprising results, we can have a great season if we work just as hard, "said Bonaparte during a recent interview on PFC WEB TV.

Slid3Tackle
7 years
You have a decent squad there mate! And a pretty good pre-season!
1
Login to Quote