No1VillaFan
7 years • Edited
To keep things fair, certain people who are regulars and will be able to play the Chairman Game are to be contacted asking if they wish to join. Each entrant will pick a number from 1 to 18 and each number will be a certain Bundersliga team. The team that they get is the team they will use. Only members who are active and trustworthy will be asked to join. This means that if you are not asked to join at the start of the game, you will not be in the game to begin.
However, you may ask to join the waiting list, which allows you to take over a team if the chairman drops out.

3. If you feel the need to adjust your transfer and wage budgets, you can do so. £1m of transfer budget becomes £10k of wage budget and vice versa. However, when doing this, you must keep track of your finances, so that you do not spend more money than you have.

4. Your manager will be given the remainder of your transfer and wage budgets to sign players that he so desires. This means that you will be able to rely on him to find a player to fill a gap in your squad rather than having to do it yourself. However, the manager may sell any one of your players to another team. Perfect reason, I think, to shell out £5m and give him the sack. However if you fired him you will have to just take whoever is given the job on the game

1. You do not have to do press releases or any kind of updates if you don't want to. However, if you do, please put effort into them to keep them neat and presentable in the same way that you would with a story.
2. You must be able to regularly check the thread for updates, read your PMs, and follow the rules of the game. Failure to be active or repeatedly violating the rules of the game will see you being removed from it.

1. To sign a player from another team in your league you must contact the Chairman of that team and agree a value with them via PM. (You can then calculate their wage using one of the rules below) Both Chairmen will then need to PM me. with the agreed transfer fee.

2. You may sign any amount of players on a permanent transfer or loan from other Bundersliga clubs.

3. You may have 5 foreign transfers and 3 transfers from the lower leagues in Germany. To do this, you must name the player and his club in a PM. In this PM you must also post the transfer fee you wish to pay, which must be over the player's value (see below). You first offer will be final

1. If the transfer is below £5 million, then £10k will be added to the players' current wage.

4. If the transfer is above £25 million, then £50k will be added to the players' current wage.

It will cost you 1m per improvement for Training and Youth upgrades. Everyone will start with both at 10 and 10. Any upgrades will come out of your transfer budget.


Every Club will start with 75m Transfer budget and a wage budget of 2m a week. 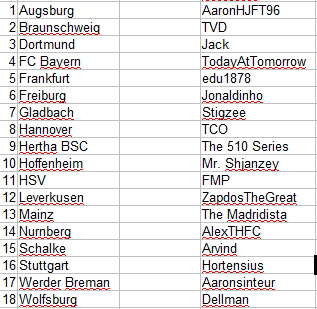 5 foreign transfers and 3 lower league ones allowed following the rules i set out. please put all domestic transfers first, then foreign, then lower league and then freebies, you may bid for as many freebies as u like, highest wage wins.

EdenHazard17
7 years
Can I be a reserve?
Login to Quote

No1VillaFan
7 years
u sure can

Mr. Shjanzey
7 years
I can't really access football manager until after the window closes, so I guess I'll just stick with what I got and hold my breath.
Login to Quote

Bst
7 years
Can i be a reserve?
Login to Quote

Arvind
7 years
Got all the players I bid for. Sweet ^_^ A win isn't the worst way to start off the campaign either :v

Could we get an announcement of our managers, please?
Login to Quote

Arvind
7 years
Umm..how does the Neymar bid go through? O.o His in-game value is £36m, and the bid you've listed there is 31m..it needs to be minimum 39m, though, right?
1
Login to Quote

aaronsinteur
7 years
My signing Rondon scores at his debut and i got all the players tht i wanted thats great!
Login to Quote

AlexTHFC
7 years
4 of my 5 players I got and I still lose to Freiburg. Wow.
Login to Quote

You are reading "German Chairman Game".