The end of an era?


Aaaaand the game is over. FC Bayern has qualified to the Champions League final after smashing FC Barcelona with 3-0 and an aggregate victory of 7-0.

I´m very upset about the game. We din´t play good and I´m really disappointed. I want to apologize to all the Barca supporters for this terrible result.

But now we have to focus on the league. I´m sure that we can win it.

Of course Barca can win the league. But after this big loss, many people will ask the same question. Is this the end of an era?
Login to Quote

Barca are the champions of Spain


La Liga is over for this year. And FC Barcelona are the winners! They secured it after Real Madrid´s draw against Espanyol on 11 May at the Cornellà-El Prat. That result gave FC Barcelona an 8 point lead with two matches remaining.

Barcelonas last game was against Malaga. The game ended with a 4-1 victory for Barca. Goalscorers were David Villa, Iniesta, Fabregas and Montoya for Barca and Morales for Malaga.
http://www.ilovefcbarcelona.com/wp-content/uploads/2013/05/2013-05-19_BARCELONA-VALLADOLID_25.v1369002586.jpg
Barcelona has been at the top of the league table for the whole season, and they´ve only lost two matches. This is the first title as a head coach for Tito Vilanova.

After the game Vilanova speaked to the press.

I´m very happy to win the league. This is the first title for me as a head coach and I´m very proud over the team. I hope that we´ll do this well next season too and then we can hopefully go further in the Champions League, Copa del Rey and the Super Cup aswell.
http://media2.fcbarcelona.com/media/asset_publics/resources/000/052/090/size_640x360/2013-04-26_ENTRENO_05.v1368373544.JPG
But we´ve talked to some Barca supporters and they doesn´t seems to be satisfied despite the La Liga title. Here´s what some of them said:

- "Of course it´s good to win the league title but I think that it´s just a cover to the terrible loss against Bayern."
- "We need to rebuild the team for next season and give more play time to players like Thiago, Bartra, Rafinha and keep some experienced players like Xavi, Puyol and Abidal."
- "The board is a joke they´ve failed to sign a centre back for three years now. And Zubizarreta is a joke as sports director. We´re playing with Mascherano and Song as centre backs, it´s a fucking joke."

The supporters doesn´t seems to be satisfied. Can we expect big changes in Barcelona this summer?
Login to Quote 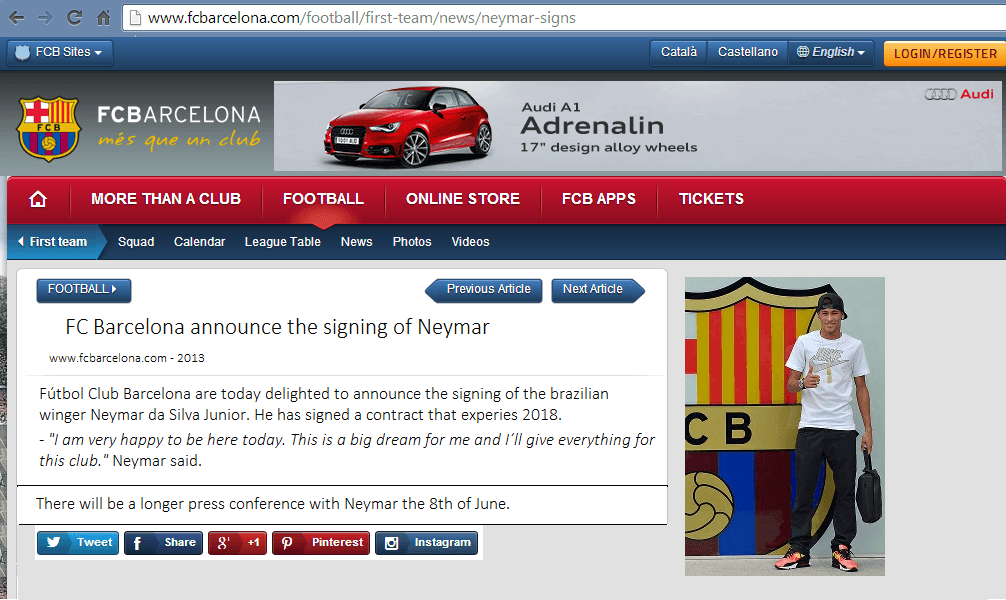 The young midfielder Thiago Alcantara has joined the german side FC Bayern Münich for a reported fee of about £22m. Thiago has signed a contract that experies 2017. Thiago leaved a short comment to the press.

I´m sad to leave Barca, but I have to think about my carrer. I don´t think that the manager believes in me and I need to play matches to develop and I think that I can do that at Bayern. The Barca board has also taken the decision to not renew the contract of the leftback and fans favourite Eric Abidal. Eric has also talked to the press.

I´m very sad that the Barca board doesn´t believe in me and that I have to leave the club. I´ll miss all my teammates. But I won´t end my carrer, I´ll continue somewhere else.

Many Barca supporters has criticized the sellings of the great talented Thiago and the club legend Abidal.

- "The board is taking really bad decisions. They don´t know what they´re doing." Says on of them.
Login to Quote

Josh_MU
6 years
Some good updates here, keep it up.
Login to Quote


The FC Barcelona manager Tito Vilanova has today announced that he´ll leave the post as manager for FC Barcelona as he relapsed from his condition, stating that the related treatment was not compatible with the status of a professional manager. He said following to the media:

It´s a very sad day for me. But I have to be fair to myself and the club. I can´t do my best if I´m sick. I want to thank the club and the team for a wonderful years and I wish them all the best luck in the future.

This is a very sad day for me, and for Barcelona. We lose a fantastic man and a fantastic manager. All I can do now is to hope that Tito will get well soon.

FC Barcelona released a statement saying that they will try to find a new manager as soon as possible to get well prepared for the new season.
Login to Quote

AS4
6 years
Curious to see where this is headed...
Good luck mate

Martinez is the new Barcelona manager


Today FC Barcelona announced their new manager following to Tito Vilanova´s resign. His name is Roberto Martinez. He became the manager for Everton FC for just two weeks ago, but when Barcelona activated his buyout clause and contacted him, he accepted.

We are very happy to announce that Roberto Martinez is our new manager. He´s very talented and he´ll fits in perfect in the clubs aspects. He´s made great things with Wigan Athletic and Swansea City and we think that he´ll succeed here in Barcelona aswell.

Roberto himself said following to the media:

This is a great chance for me, FC Barcelona is a very big and successful club and I´m very happy to get the chance to manage the club. I´ll meet the players for the first time tomorrow and then we´ll start to prepare for the pre-season. I hope that we can win many trophys and bring joy to the fantastic fans.
Login to Quote


FC Barcelona has confirmed and released their new kits for the 2013-14 season. The main sponsor is Qatar Airways and their logo is on the front of the shirt. On the back there´s a Unicef logo and on the inside of the shirt there´s a Intel logo.

Both the fans and the players seems to be very pleased with the new kits.

The home kit is in the classic blue and red colors and the third kit is black, just like last year. The big change is the away kit, it´s red and yellow. That´s the colors of the catalan flag and that´s a reason to why it´s very popular among the fans.
Login to Quote

Jamesg237
6 years
A great start to the story and an interesting choice of manager. He simply couldn't turn down the opportunity!
Login to Quote