Josh_MU
7 years
Some good signings there!
Login to Quote

What is your current salary budget?


Thanks man. Sahin's loan was already at 80K I think and I am paying him the same salary that he was getting at Madrid. Plus to get him on a five year deal with possible extension was steal. Valued at 20 mil and got him for five. Will be centrepiece of my midfield and tutor any future stars

Thinking too far ahead am I? XD

I got a budget of 16.5 mil and wage budget of 120K. Hoping that by the time second season starts will get more funds.

Sahin was quite a steal I think

Got him for 1/4th of his value

On the month...
I think it was a good month, six games and six wins. Solid performances throughout mean that our team will be in contention for all the trophies. That 3-2 lead over Porto might not be much, but the away goals will be vital when we see them at home. Mkhitaryan and Reus were firing on all cylinders. The victory against Bayern means that we have successfully completed a league double over them - beating them twice by 2 goals! However, the talking point would most definitely be the 8-1 routing of Wolfsburg we did at home. The fans went absolutely crazy, it was like a goal fiesta. We went down early, and then attacked relentlessly, getting us the mammoth 8-1 scoreline. Hopefully we continue this form ahead. 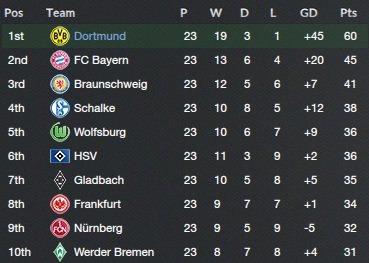 Player(s) of the Month
http://media.bundesliga.com/media/images/12_bl_com/628x353/bvb_reus_mkhitaryan_628.jpg
This one was hard. Both Mkhitaryan and Reus take the PoTM award for me. Mkhitaryan does most of the work that goes unnoticed on the scoresheets really, while Reus is the one who powers us home. I think they are a fantastic combination, and the core around which I would love to build the Dortmund of the future.

AdamFinchale
7 years
what formation r u playing
Login to Quote

Hey. Playing a 5-2-3-0 : which is 3 CDs, 2Fullbacks + 2 DMs (Sahin and Bender usually, sometimes Kehl takes over) and 3 AMs - No striker.
Overload when home or against weak foes, and control or attacking when away.\
Hope it helped

good job in beating bayern tho
Login to Quote

On the month...
A loss against Frankfurt was tough to handle, however the boys bounced back in great fashion against FCP, and fantastic results against Schalke and Leverkusen. The 6-2 victory against Nuremberg was pure class, the team played so well, perhaps they were spurred on by the fact that if they won this game, we would have clinched the title with six games to spare. And we did. Wow. To grab the Bundesliga already, and beat off the insane competition off Bayern is amazing. Now we need to stay focused and perform 110 percent in the Champions League and DFB Pokal. The team deserves to win

Player of the Month
http://images.supersport.com/2012/Lukasz-Piszczek-121003-Inaction-AI300.jpg
Lukas Piszczek
In the game that we play today, the players that are least noticed are perhaps the fullbacks. Lukas' performances have been overlooked quite a few times this season, which makes sense considering the absolute amount of firepower this team possesses. But this month has been his best by far. Not only has he upped his game, he looks much more responsible now, and has clearly performed at the next level. He has guarded the flanks well and has created problems for the opposition defence with his constant marauding runs into the opposition defence. I am sure he will keep up his stellar performances. 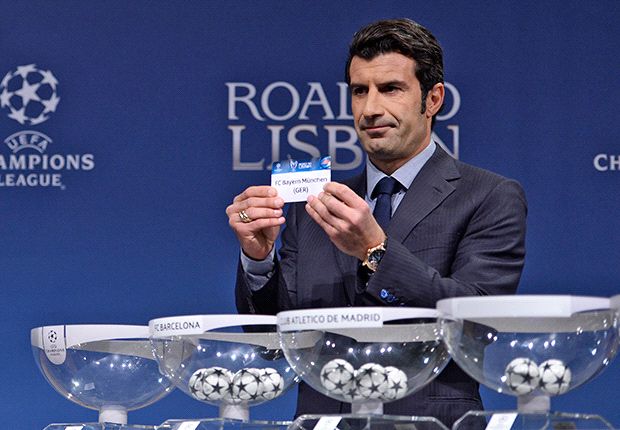 good job in beating bayern tho

Yeah noticed that now that you pointed it out! Thank you and keep reading

Zed
7 years
Nice run there in March. Shame about the result against Frankfürt though. Arsenal seem like one of the easier teams you could've drawn in the Champions League. Good luck in April!
Login to Quote

ARSENAL_ruleZ
7 years
Good luck against Arsenal and Awesome Form in the league. I wanted to ask you if it's ok for you to show me your tactic since I am also managing BvB but I'm struggling and yours is clearly very succesful. Keep it up

I poured myself a glass of scotch as I saw the news on television, "Dortmund secure the Bundesliga title with six games still left to play" said one presenter, as I switched it to another channel, it was the same thing - "Klopp leads Der BvB to the title comfortably". I wouldn't lie, it was nice to hear that. Why wouldn't it be? The team had worked hard all season, and we had gotten great results. Amazing results to be honest. As I finished the bottle of scotch, my attention went back to the program, which now had two 'football analysts' trying to analyse my tactics. Huh? Listening to him talk about my tactics made me remember the day, the day that we sold Lewandowski off to Bayern...

The board didn't want to sell him, but it was common knowledge that there was no way he was going to stay at Dortmund after his deal expired at the end of this season. He wanted out. I remembering convincing the board to agree to sell him off. And then convincing myself that we could indeed cope without our Polish talisman and super scorer. That night, I came back home. Anxious to come up with a tactic that would get the most out of the players we had. We couldn't really play Aubameyang all the time since he was our lone striker. Yes he had pace, but I was certain he needed some time to develop a bit more. To become more refined. He would need at least a season more. But no, we couldn't wait, we had seen Bayern take the title the previous years, and I was NOT going to let that happen. I had to do something about it, and the only way to solve this dilemma was tactically. So I was off, off to the drawing board (or should I say, the book).


Our biggest problem was getting by without a striker, and to solve that problem we needed to come up with something that the footballing world had quite never seen before. The first tactic I constructed was one that we would use against teams that were weaker, or at home against evenly matched team. This tactic needed to be solid defensively while providing an outlet for offensive chances. We couldn't really use wide players now, so I decided to have a 3 man backline that was solid defensively, and two complete wingbacks who would make marauding runs and trouble our opponents constantly. I also decided to set the team up to follow a few rules - To play narrow, pass short, build attacks out of the defence and not just clear the ball, look for overlaps and play at a very high tempo. Constant hassling of opponents and tight marking were a must as well. This attack was built around the efficiency that Reus and Mkhitaryan would provide, with Fischer also subbing in sometimes for either of them. 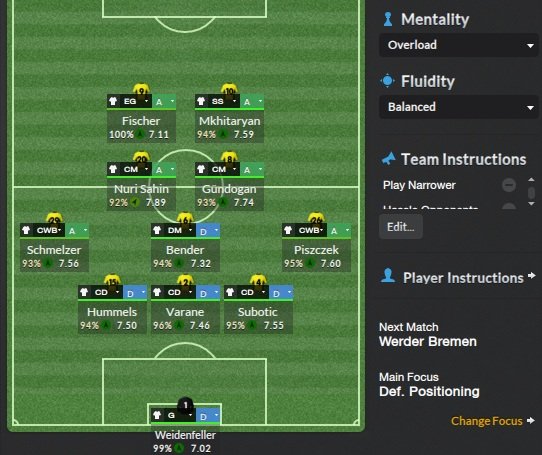 Our second tactic was one with a five man defence - three central defenders and two fullbacks, and this would be the tactic we would employ against teams that were stronger or against evenly matched teams at away grounds. Again the ideologies that players had to maintain for this formation was the same - and I added just two instructions to the team, to drill crosses inside the box and to look for passes in open spaces. The tempo that the team was asked to maintain was much higher than the previous tactic too. This tactic would be contingent on how the midfield trio - usually of Sahin, Mkhitaryan and Gündoğan - would perform. 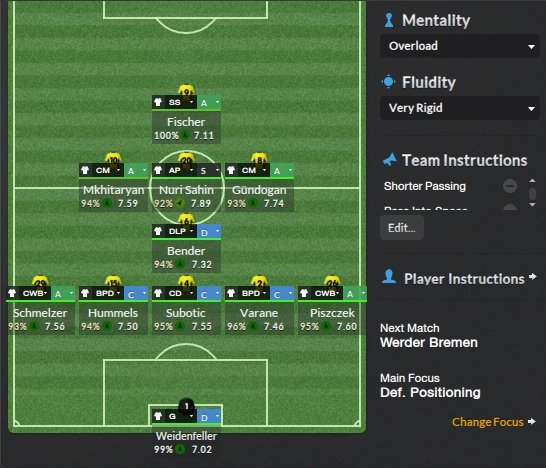 The third tactic was one that gave Aubameyang his playtime as the spearhead of the attack. This was a regular 4-2-3-1 that would be employed against evenly matched or weaker teams. The only added instructions for the team in this formation was to exploit the flanks and to have the backline positioned deep - in order to ensure that we don't get screwed if there is a botch up in midfield. 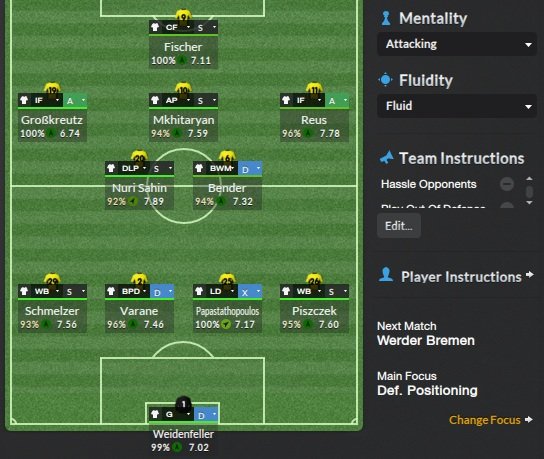 All these three instructions were exactly tailored to suit how I play - an attacking style of football. Something like Heavy Metal - something that hits you in an instant!


In retrospect, they were perhaps the finer tactics I have made over the years... Even though I admit I like the tactical aspect of the game, always have. And like it you must because if you don't then it is my belief that you are in the wrong job, I hate losing players.... First Götze, now Lewa, now the papers claim Hummels might follow the two to Allianz-Arena. I never admit it but it hurts. It hurts to see players that you nurture so lovingly leave for your rivals. For me, they are like my kids. And when this happens it is heart wrenching. That was the day I swore, that I would never ever again lose a player to a rival club. I swore to make Dortmund better than Bayern. Better than any club in the world. A club that every player would want to play for. It won't be easy, but nothing worth anything in life ever is.

As I felt my eyes become wet, I decided to chug down another glass of scotch as I turned my thoughts to the next game against Arsenal.

2014-06-02 16:11#178195 ASR-PSV : Nice run there in March. Shame about the result against Frankfürt though. Arsenal seem like one of the easier teams you could've drawn in the Champions League. Good luck in April!

Thanks man! Yeah but Arsenal could prove a tricky team to be up against - plus they have been in amazing form, hoping for the best! Danke! :p

2014-06-02 16:56#178200 ARSENAL_ruleZ : Good luck against Arsenal and Awesome Form in the league. I wanted to ask you if it's ok for you to show me your tactic since I am also managing BvB but I'm struggling and yours is clearly very succesful. Keep it up

I dont mind sharing tactics - put them up above. Quite a writeup I know but I thought it could add to the story a bit

Sorry. If you need anymore specifics about the tactics feel free to ask. 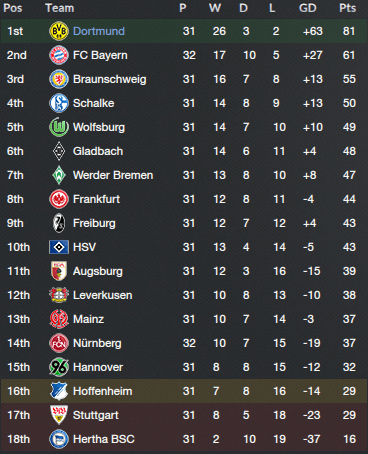 You are reading "Borussia Dortmund - Black and Yellow".