So, some of you may remember Back to the Future (no, not the film). If you don't, it was my old story with Watford where I holidayed to 2020 and played on from there. It was actually pretty fun until I stopped updating. But anyway, here's the point, I thought why not reboot it?

So here I am, doing the same thing, but with Southampton. Yes, I will be carrying on my Nigeria story, in fact I will be updating both at least once a day. Wish me luck!

Sheffield United midfielder Michael Carrick has retired from professional football because of a long-standing knee injury.

Carrick only signed for Sheffield from Manchester United last season but has decided to quit after receiving medical advice on his knee problem.

The 38-year-old said: "Having received advice from my surgeon and the Sheffield doctor, my only option is to retire."

"I would like to send the manager, staff, the players and the supporters of Sheffield United best wishes for the future," Carrick added in a statement.

Carrick joined United from Tottenham Hotspurs for £14m in 2006. He then moved to Sheffield United, after 12 seasons at the Red Devils, on a free transfer.

Sheffield manager Owen Coyle said: "Michael Carrick is an amazing midfielder and one of Englands best midfielders in recent years."

"It was fantastic that we were able to bring him to Sheffield and it has been a privilege to work with him."

"Even in his short time with the club, Michael made a great contribution and played an important part in the team last season."

"We would all like to wish Michael and his family all the best for the future. Michael will always be welcome at Bramall Lane."

Fans around the world are wondering whether Carrick will now turn to management or coaching. Bookies have him favourite to take over the vacancy at Manchester United as assistant manager.
Login to Quote

Josh_MU
6 years
Carrick<3 Will be missed.
Login to Quote

AlexTHFC
6 years
Can't wait for this

TylerK
6 years
Josh: I absolutely love Carrick!
Alex: It's great to have your support
Login to Quote

Marcelo Bielsa has been sacked as manager of Southampton.

It has come as a shock to football fans across the globe as Argentine manager, Marcelo Bielsa has been sacked from Southampton.

Southampton finished last season, Bielsa's first season in charge, in 5th ahead of Liverpool and Spurs.

Bielsa was sacked following a dispute between him and chairman, Marc Tubbs over the signing of Serbian striker, Dimitrije Jokanovic. Tubbs overrode Bielsa and payed £1.9m for the 18-year old from Novi Pazar in the Serbian league.

"It is with great displeasure that I must announce the sacking of Marcelo Bielsa," The chairman released in a statement online.

"He was great during his time here and we wish him good luck wherever he goes next."

The statement continued: "The search for a successor is now under way."

"Until a manager can be found, Zinedine Zidane will take over the hot seat."

Favourite to take over at Southampton is former striker, Rickie Lambert who is currently unemployed and on the lookout for a managerial job.
Login to Quote

Southampton have confirmed that Michael Carrick has replaced Marcelo Bielsa as the new manager at St Mary's Stadium.

The Englishman, who has just recently retired from a playing career, will take charge alongside Zinedine Zidane who will be assistant manager once again.

"The club is delighted that in Michael we have a very knowledgeable man who can come in at a difficult time," said the club.

Sky Sports revealed the news yesterday morning as Bielsa said farewell to his players and fans at Southampton.

Carrick, 38, is due to be unveiled at a news conference on Friday and it is understood that his appointment is for the foreseeable future.

Sir Alex Ferguson, former United manager and member of their board, is a friend of Carrick's and backed him to make the step up to a managerial position.

"I think he's ready for the job," said Ferguson. "It's a big job of course and whether he will do it better than Marcelo Bielsa I don't know, but I will call him later and wish him good luck."

"He's a very good man," he added. "He knows his football and did a great job during his playing career."

Carrick's first game of the season will be away at Watford which could be a very hard game considering how Watford have improved over the last few seasons.
Login to Quote

MaxTheGreat
6 years
It will be good to see how their youngsters have developed.
Login to Quote

AS4
6 years
Yes!
Carrick as a manager! Absolute genius 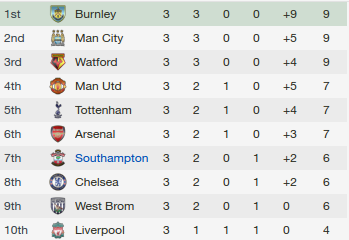 
The month started off slow with the loss at Watford and the mediocre result against Blackpool, but we soon amended with a 3-0 win at the Britannia. Craig Dawson is one of my key players making some important challenges and scoring from set pieces. My new signings Lleshi and Apolloni are looking like they will grow into very good players with a bit more experience. I have a relatively easy run of matches next month with the hardest game probably being away at Basel.
Login to Quote

bebero
6 years
Have a group in Europe accessible, good luck out there!
Watford defeat sin! A surprise leader, in my opinion! I wish you good luck.
Login to Quote

InvertedWingbacks
6 years
Great update; I really like the idea of this too! good luck mate! The Europe group looks good for you!
Login to Quote

You are reading "Southampton - Back to the Future (MARK II)".