The German managed has recently spoke out about becoming the new head coach of the former Ligue 1 champions and he had this to say:

"I am very excited to join such a fantastic club, I am hoping to take this team of talented players under my wing and make them a real driving force in this league and other continental competitions, I have very high hopes for the season and I believe we can finish in those European spots come May."

"The chairman is a very ambitious man and I can announce that I have the full backing of the board, we may not have the finances of PSG or Monaco, but I feel with what I have available to me and also with the squad we have we can mount a real challenge this year."
Login to Quote

Slid3Tackle
6 years
Now that's a manager that can defeat PSG!!
Login to Quote

"In order to have a successful season, we need to get it right behind the scenes, that is the reason for the reshuffle of the backroom staff. I have brought in a new assistant, someone who knows me very well and knows the system I like to play, Robert Valette. As for the coaches I feel the quality of players we have here compared to the quality of the current coaching staff we wasn't getting the best out us, this due to the previous coaches being too lenient and not bringing as much to the table as the new staff. As for the new coaches I look forward to working with them in the future, they understand what I am trying to do here and I believe each of them brings something different to the table and can help us progress."


"Now for the most important thing, the tactics. We will set up in a 4-2-3-1 formation this season lads, with one of the center midfielders dropping deeper to play in defensive midfield. 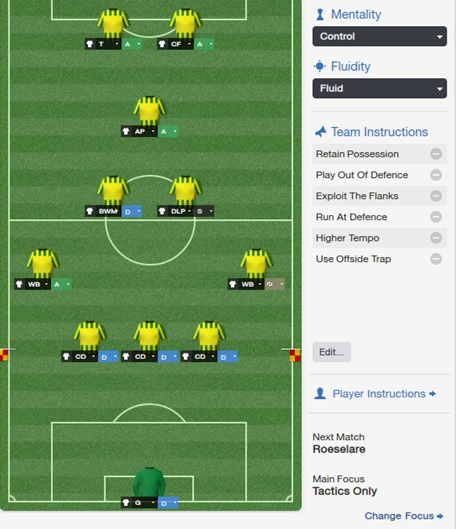 Keepers, I want you to be smart. DO NOT JUST HOOF THE BALL... Look to see what is going on around you, I want to build from the back... And this does include you having to be able to play with the ball at your feet. I'm confident that you are all capable of doing so, if you're under pressure and only then, I will allow you to hit it long!

Defenders, You all know your job... Stop that ball from hitting the back out our net, You're all solid enough and physical enough to give any striker in the league the heeby jeebies... I want the center pairing to prepared to take the ball in at feet from short dead ball scenarios, and from there build up an attack. As for the wide men I EXPECT and TRUST you to bomb forward and aid in attack and also be there to help defend, you're going to need to be very physically fit for this, it's a long season but I'm confident!

The defensive midfielder in this formation will be expected to be solid in front of the two center halfs, you must close down that man in the whole. I don't care who it is.. I expect you to let him know he's in a game of football and I expect you to keep him quiet all game.

The lone center midfielder is expected to offer something going forward as well as offering cover in defence, you will be a deep lying playmaker looking to make that pass to set us on our way.

The two wide midfielders, I want you to offer support to the forward at all costs. I want you flying down the wing! putting crosses in and coming inside to fire some shots at the keeper. You are expected to get back also and support the full backs, but I am sure common sense will kick in there...

As for the man at the spearhead of the midfield, It's your job to play in that hole, look for space and look to unlock the defence, use your instinct but also your common sense. Play those balls in between the defenders for the other three to capitalize on.

Stikers, you know what job is expected of you. Get us the goals! you will not be short of ammunition with the three behind you offering support and the killer balls for you to latch onto...

Everyone here today with me will play a part in any success we have at this club, there is no concrete starting eleven yet, it's a clean slate... Everyone will have the chance to impress me now go on and play for that shirt!


ANN - It certainly is buddy, thanks for the comment

AS4 - That's the plan and thanks mate!

Josh - Wasn't enjoying it mate, really fallen out of love with the English league on FM and always admired watching Lille so thought it may make for a good story

bebero - Thanks pal!
Login to Quote


Sky Sports can confirm that Lille manager, Jupp Heynckes has made his first signing of his new reign at the Stade Pierre-Mauroy, Valentin Stocker joins from Swiss side FC Basel for a fee believed to be in the region of £6.5 million.

Above: Stocker in action for FC Basel in the Champions League

It was believed that the move came around because of a breakdown in a recent move for Monaco wide man Carrasco. The Belgian turned down a loan move in favour of going to play in Portugal, but Jupp wasted no time in bringing in another man. He had this to say:

"We needed a left sided midfielder, there was no hiding that fact. We have a shortage of men able to play down that left flank effectively here. We did initially look towards a loan move for Carrasco but he opted to play his football elsewhere, then I heard about the availability of Valentin. Somebody I feel is a terrific player, he was under the radar previously at Basel due to all the hype about Shaqiri and Salah, but I think people have underestimated Valentin's influence down the left hand side. I am delighted we had our offer accepted and he is now a Lille player."

Stocker also has recently spoken out about his recent move to the French side and he had this to say:

"I'm delighted to be here, this is a big club with a bright future and a terrific manager. I couldn't have possibly turned down the chance to work with Jupp and the lads here, I wanted to be a part of this project and I am delighted to be here. France is a nation I've always wanted to play football in even more so recently, due to the high caliber of players that have come over to play here. I would also like to thank all the Basel players, staff and fans for making my stay there so enjoyable and I wish them all the best of luck in the future!"

Stocker will wear the #19 shirt this season for his new club and he will imminently meet up with his new team mates for their first preseason clash with Zweibrucken.
Login to Quote

Heynckes' Lille side managed to remain unbeaten this preseason due to some good results, the French side managed to notch up four wins out of their five games, drawing the other. Heynckes will be particularly impressed with the efforts going forward as they managed to rack up 19 goals in preseason, all be it they were against relatively easy opposition but nevertheless it is still a lot of goals to score, especially in five games. They also did particularly well in defence to only shipping in four goals, though they will be disappointed in the manner that they conceded them due to sloppy mistakes along the back line.

Lille boss Heynckes had this to say:

"Preseason isn't about the results to me, It is about getting the team match sharp ahead of the new season and give chances to those that otherwise may not of got a look in. It is a chance for everyone to prove to me that they are capable of playing for this fine club, and that I am able to trust them to go out and do a good job week in week out. They haven't disappointed me as of yet, four wins and a draw is marvelous although it was against weaker opposition but regardless they lads performed very well, we now look forward to our season opener against Lorient."

Above: Kalou in action is preseason, dribbling down the left side of the pitch.

For me there could be no other, although the lads performed admirably across all five games, one person however just blew everyone else out of the water, and that man is Salomon Kalou, he managed to grab two hat-tricks and a couple of assists too, hopefully the form will continue into the season and we will have an interesting campaign.
Login to Quote

Josh_MU
6 years
Very good pre-season man. Some very impressive score-lines! Let's hope you can continue your rich vain of form into the start of the Ligue 1 season! Kalou is a great player can will hopefully help you achieve a good finish in the season. Great update as always!
Login to Quote

Jamesg237
6 years
A great pre-season with some impressive results. This is a great start to the story so keep it up.
Login to Quote

Jer
6 years
Great start to your life at Lille.. Are you going to use Kalou or Stocker at the left side?
Login to Quote

kernel
6 years
Some great pre-season mate. You should get Eden Hazard back

AS4
6 years
Great start there

You are reading "Lille: A New Chapter".