No1VillaFan
7 years
Nice update and my danish side of choice are top!!! but i hope u can come a close second!

http://www.fifa.com/mm//Photo/WorldFootball/ClubFootball/01/53/83/99/1538399_FULL-LND.jpg
Ivan Klasnic and Lee Wallace have become the latest names to join the OB ranks, as Hans Down prepares for the new season. Both had been released by their respective clubs, and will be regarded as transfer coups for the club.

With Odense's transfer revenue now sitting at a princely £6.66m in sales, the club are in a stronger financial position than many were anticipating, and with the only signing which has cost money being Guly do Prado, manager Down looks set to build the clubs finances even further.

33-year old Klasnic started his footballing career at St. Pauli in 1995, and broke into the first team in 1997, going on to score 26 goals in 95 appearances, before a move to Werder Bremen in 2001. At Bremen, Klasnic made 151 appearances, scored 49 goals and won three trophies: The German Cup and German 1st Division in 2004, and the German League Cup in 2006.

He Then moved to Nantes, scoring 10 in 33, and spent time on loan at Bolton where he scored 8 goals in 27 appearances before making that move permanent. At Bolton, Klasnic went on to score 20 goals in 78 appearances, before a move to Mainz, where he played 3 games and scored 1 goal prior to his move to Denmark.

http://i1.dailyrecord.co.uk/incoming/article2100108.ece/alternates/s615/Rangers-v-Albion-Rovers.jpg
26 year old Scot Lee Wallace has also joined the club, reinforcing the left-back position after his move from Rangers. Wallace was far from happy at Rangers, and when he demanded he be allowed to move, OB snapped him up for nothing, a move which looks like good business.

Fans will be keen to see what their new boys can do, and the signings will only serve to boost their chances of a high-placed league finish, and potential silverware.
Login to Quote 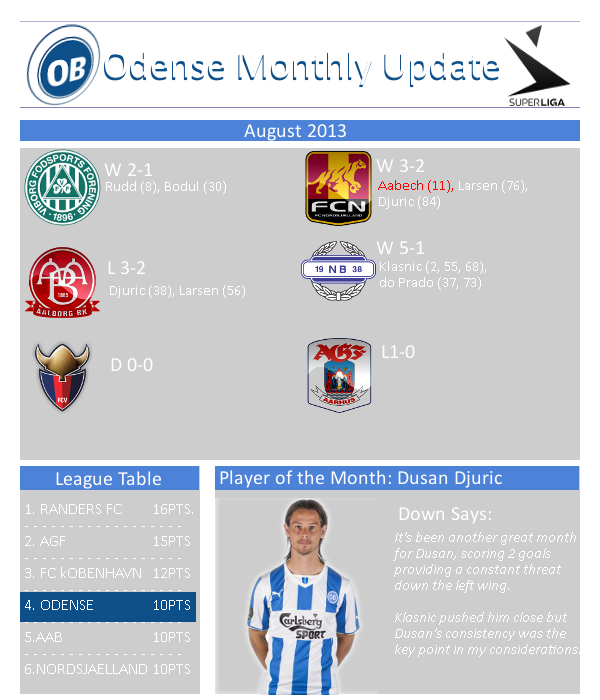 
It was a busy transfer window, both in Denmark, and worldwide. First, we rundown the transfers which took place within the Superliga teams, however due to a large number of loan moves, we will only list incoming moves, and cash deals for each club.

Neal
7 years
You made quite a bit of money but you lost some very good players, especially Kadrii, in my opinion. Hopefully your replacements do the job, though!
Login to Quote

Yeah, I took a bit of a risk, but our season expectation is only mid-table, which I reckon we can still hit, but at least the club is out of the woods now financially
Login to Quote 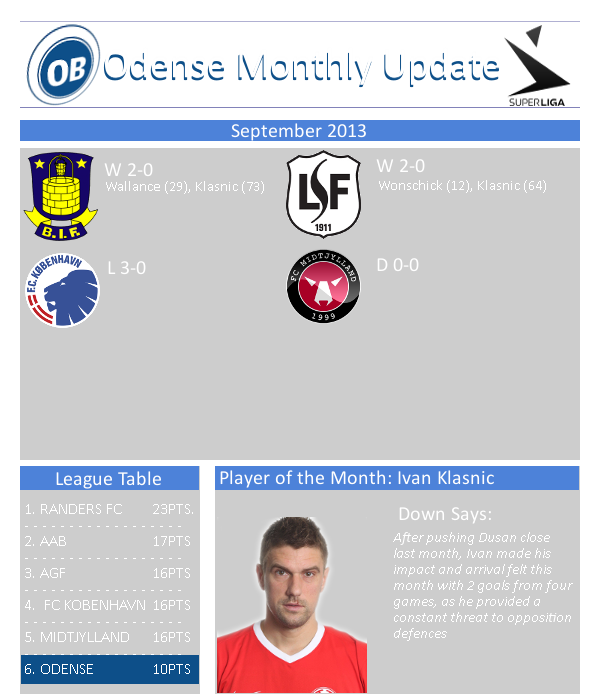 a_esbech
7 years
Ivan the not so Terrible?
Login to Quote

Larsen joined Odense from Lyngby in , for a fee of £400k, and has gone on to make 38 appearances for the club, netting 8 goals in the process. With Dusan Djuric at the club on loan from Valenciennes, Larsen has been playing on the Right Wing of late, but a new formation, and some movement within the squad may be signalling a more central role for the youngster. We picked his brains about everything from pre-match rituals to wether he prefers smoked or unsmoked bacon!

SS: Emil, thanks for taking the time to speak to us today; how are you feeling about the sides 6th placed finish in the First Period of the league?
EL: It's a solid base for us to build on...we've got a two week break now where we're going to be working on our tactical systems and personal skills, ready for the game against SonderjyskE on the 19th of Novemeber.
SS: Now, we noticed that in your last game, the formation was slightly different; can you talk us through that?
EL: Yes, in our last game we switched from our usual 4-2-3-1 with the midfielder dropped deep, to a 4-1-2-1-2, which allowed us to focus our attack through the centre of the pitch, and gave us more attacking options within the opposition box.
SS: As a winger though, are you not concerned that maybe that formation is going to leave you with less playing time?
EL: I think you're casting aspersions here; i'm under no illusions and everyone at the club knows they have to work hard for their place on the pitch at the end of every week; Hans spoke to all of us about this tactical change, and i've been working hard in training to adapt my game.
SS: So do you think you'll be getting more game-time then?
EL: If I can keep my head down and keep working hard, then I don't see why not.
SS: With a solid start to the season, and the side currently sitting in 6th, what do you make of your chances of European Qualification? Surely the fans are anticipating more after your exit at the group stages of the Europa League in 2011?
EL: I think we're in with a good shout this season. Hans has got the whole team working as a unit, and we're improving with every training session.

SS: So Emil, when you're not in training, what do you get up to in your spare time?
EL: To be honest, i'm not that exciting; video games, seeing friends, eating more pizza than I probably should....just normal stuff really
SS: Ok, do you mind if we take some questions from our twitter followers for you now?
EL: Sure!

EL: Obviously losing players like Rasmus is a tough blow to take, but Hans did some great business in the transfer market, bringing in a mix of experience and youth really cheap to make up that ground.
SS: That's great, and leads perfectly into the next question:

EL: Oh wow, thats a tough one...I think so far i'd have to say Ivan Klasnic; he's been superb since he got here, and all the guys are learning a lot from him.
SS: And one more for the road:

EL: *Laughs* Got to be a bacon sandwich with loads and loads of Ketchup! 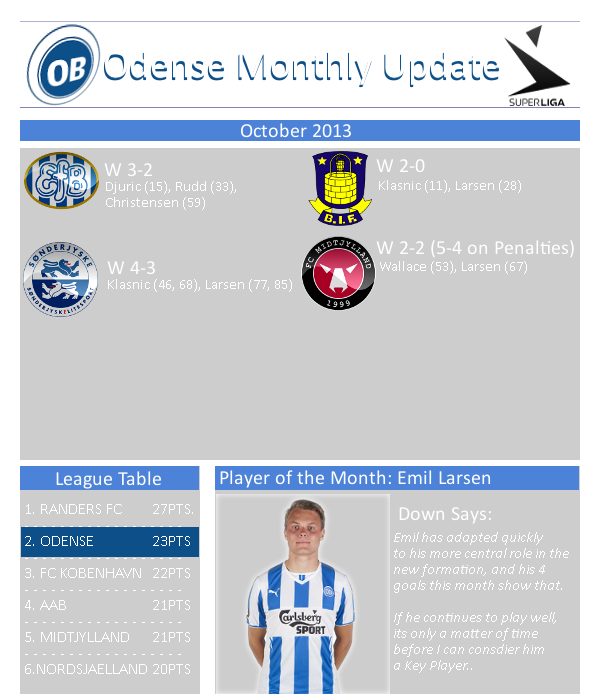 thanks bud! it's on hold just now while I try to rescue the save haha
Login to Quote

You are reading "Odense Boldklub: Pride of Denmark".