Lisbon67
7 years • Edited
Hey Guys after I forgot to save my Tottenham career before updating my laptop, taking me back to the start of October, so I have decided to start a new story.

What Team Will I Be? 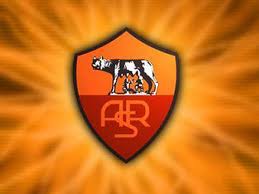 I have decided for my next story I will be taking charge of Serie A side Roma. Roma are a team with great potential to become a great club in European football. My goals for this story is to achieve Domestic success by winning all the trophies that are available and also compete at the top level in European competition. In the first season Champions League qualification is my goal and I have been given a transfer budget of £7.5 million to achieve this.

Who Will I Be?

I will be promising German manager Thorsten Fink. Previously Fink enjoyed great success with FC Basel in Switzerland between 2009 and 2011, during which the club picked up every domestic honour possible, Fink had been seen as a potential coaching star of the future prior to his move to Hamburg.

But a solid start fell apart in his second season following a run of just four points from five games, with Fink the target of anger from supporters. Fink will now take charge of AS Roma and hope to prove himself as a top manager in world football.
Login to Quote

The Roma board have announced the appointment Thorsten Fink as the clubs new manager. The German started his managerial career at FC Basel and was hugely successful, leading them to every domestic trophy available. Fink then moved to his native Germany to take charge of Hamburg but despite a good first season he was sacked following a poor start to the season.

The new man has stated that the club are not looking to sell any of their top players and they will not be adding to their current squad. At the press conference Fink revealed his plans for his new club. In his first season in charge Fink hopes he can guide Roma into the Champions League. Within three years he also ants to have won the Serie A and all domestic cup competitions. Fink certainly has brought an ambitious attitude to the Stadio Olimpico and was a popular choice amongst the Roma faithful.

You can catch all of the big Serie A transfer news and matches here at BT Sport.
Login to Quote

AS4
7 years
Nice preseason! Especially that win against PSG!

Edit : Small mistake there as you have listed three scorers in the first game against reserves while the score reads 2-0

Lisbon67
7 years
AS4-Thanks for noticing that mate, hope you will continue to follow
Login to Quote

Today we caught up with new AS Roma manager Thorsten Fink after he completed his first pre-season with the Italian club.

Are you happy with the teams form during pre-season?
Yes, I have been delighted with the form we have shown since I took charge. We won 5 of our 7 matches in pre-season. When we lost to Stuttgart I was disappointed because I believe we are a better footballing team than they are. Against City, we were huge underdogs because of the money they have to spend on the likes of Silva. This is the level we want to compete at next season, we beat Ligue 1 champions PSG who are a great team.

Will there be any new players arriving in this window?
No, as I have said before I believe our squad is strong enough to qualify for the Champions League this season. We may strengthen in January or before next season but nothing during this window.

Do you believe you can achieve the success you want in such a short period of time?
Obviously I do otherwise I would not have set these targets. It will be tough but I want to transfer Roma into a massive club in European football and to do this we must start with winning domestic titles.

Are you pleased with the new signings that arrived before you were appointed manager?
Yes they have all proved that they can be part of the team here at Roma during pre-season and have settled quickly. Ljajic has shown that he can play out on either wings as well as the main striker. He scored three goals during pre-season from the left wing and also provided assists for the team. Strootman signed from PSV and has also became an important part of our midfield. Gervinho and Benatia have also performed well in these seven matches. The club have done a great job to sign these players and others for the club and now we are all looking forward to the start of the new campaign.
Login to Quote 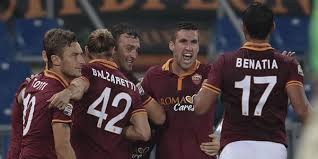 Great Start For Fink And Roma

Thorsten Fink's reign at Roma began with a game at Stadio Olimpico against Verona. Fink was given a standing ovation from the crowd as he emerged from the tunnel. It only took Roma six minutes to get their first goal of the campaign and it came from new signing Gervinho. Ljajic drilled a ball across the face of goal and Gervinho tapped the ball in for his first goal for his new club. Roma continued to dominate the first half and came close when Strootman's effort came back off the post and Totti put the rebound over the bar. Verona failed to make an impact before the break and looked like a team that would be battling for survival.

Roma started the second half vey well and doubled their lead after 51 minutes and a great solo goal from Gervinho. The Ivory Coast winger took the ball past three players before slotting the ball past the goalkeeper. Totti came close to getting Roma's third goal but was denied by a wonderful save by Verona keeper Mihylov. Verona began to threaten Roma on the counter attack and had a strong case for a penalty when Iturbe went down under Maicon's tackle but the referee waved play on. Verona got a goal back when defender Marques sent a powerful header into the top corner of the net. The game finished 2-1 with Roma's Gervinho winning man of the match after his brace.

After the game we managed to catch a few words with Gervinho. "When the new manager came I was worried because I had just moved to Roma and now a new manager has came in with his own ideas and plans for the club. Luckily he has picked me to play and I scored two goals. There is a really relaxed atmosphere at the club and we are hopeful we will be in the Champions League next season."
Login to Quote

Roma And Juve Lead The Way 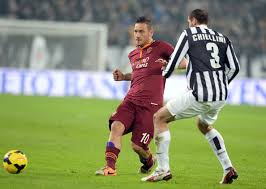 After five games of the Serie A season Juventus and Roma are joint top of the table. Both sides have won four games and drawn one. Thorsten Fink is still unbeaten as manager of the capital side. Although it is early on in his career in Rome things are looking promising for the I giallorossi

This month player of the month has been given to winger Gervinho for his excellent performances in the 5 games. Gervinho has scored 4 goals and had 1 assist in 5 games. We hope he can continue this form into next month.
Login to Quote

You are reading "i giallo-rossi per il successo europeo".