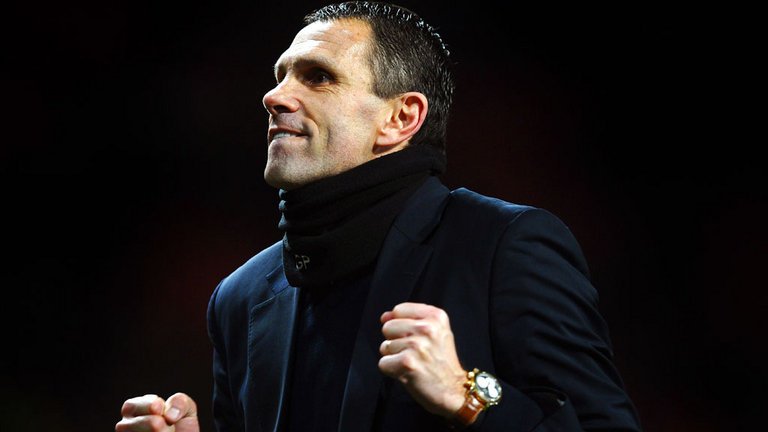 Premier League side Sunderland have confirmed the departure of manager Gus Poyet after it was revealed the Uruguayan was plotting to steal money out of the clubs official bank account with help from the infamous hacking group "Anonymous". Poyet, who only joined the club at the end of May from Championship side Brighton, left the club with regret after the truth came out about him planning to steal money from the club, stating that he was "Only doing it for his family". Poyet took over from former Swindon manager Paulo Di Canio, who guided the club to safety after taking over from Martin O'Neill and guided them to a 17th placed finish, but players complained over his training methods and his transfer business in the clubs new look player recruitment department failed to convince fans that he was the right man to lead the club and the board eventually gave in and fired him.

At the end of last season, fans were calling on Chairman Ellis Short to act as they were not impressed with the style of football on display from Di Canio’s tactics, even though he kept them up that season. The signings he made were of players yet to fully prove themselves in the bigger leagues, so fans were also concerned and the board decided to act once the fans had managed to get 3 different petitions signed for the Italians departure.

Speaking to Sky Sports News, Chairman Ellis Short gave his opinion on the situation he needs to sort out at the club.

“It’s quite clear that we had to re-think our plans on who to hire as the new manager of Sunderland, after Di Canio was not wanted by the fans and the fans’ happiness should be a huge priority for the club, but we have decided to act on this straight away by bringing in a new manager with immediate effect. We thank Paulo for the work he did last season and Gus for the few weeks he had here in terms of brining in players, and we look forward to a new challenge with the new manager. We felt that if we brought one in soon, the fans would be able to decide on whether or not they could renew their season tickets and also get used to the new manager ready for the new season, and a couple of the players here had mentioned his name too, so we hope that when we decide to officially reveal his name to the public, he will get a good reception from the fans. We aim to revel him in 2 days time, so until then I say thank you to the fans for being patient with us".
Login to Quote

Zap
8 years
Wonder who it could be :o Nice update and good luck with sunderland! (not)
Login to Quote

swanny8589
8 years
good luck mate, though im a Newcastle united supporter I wish you all the best


Thanks mate:)
Login to Quote

thanks mate:)
Login to Quote

2014-06-06 00:10#178789 ZapdosTheGreat : Hahaha you start a Sunderland story and the first two people to comment are Middlesbrough and Newcastle fans xD


I know man, quite ironic haha
Login to Quote


thanks mate! using it as a way to link in future posts
Login to Quote

Feliks
8 years
good luck mate. why poyet? why couldn't you stay at my beloved brighton?
Login to Quote


Ahh, new manager will be revealed later
Login to Quote

You are reading "Sunderland A.F.C. - The Second Coming".