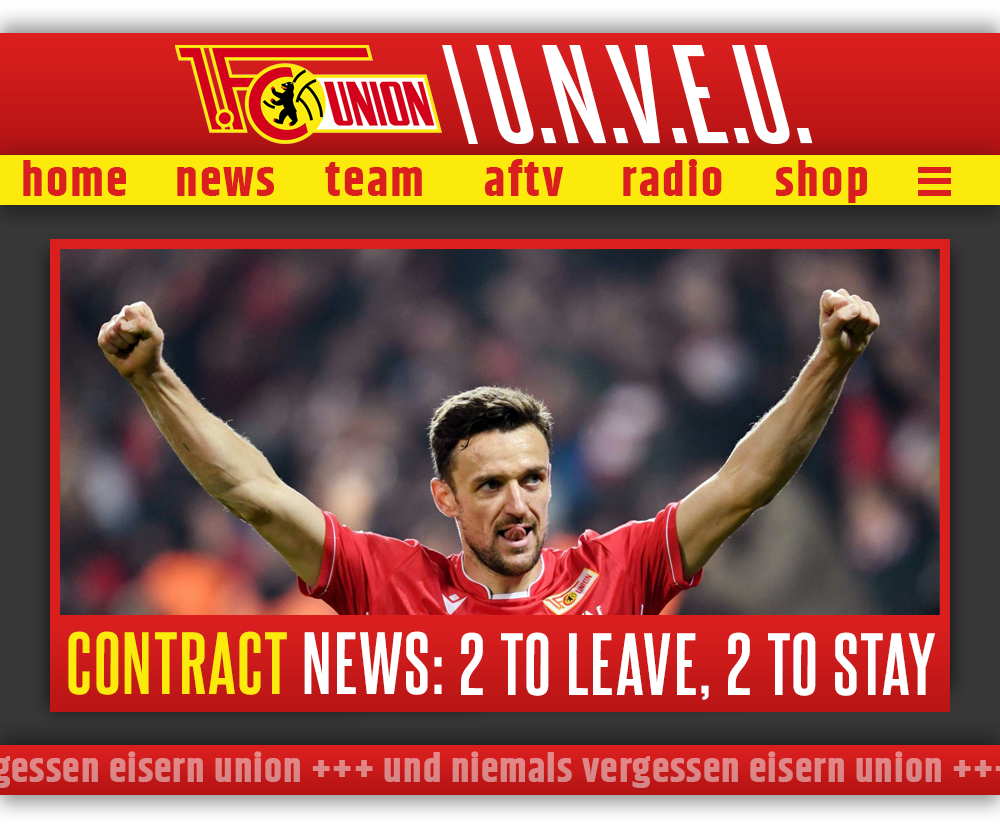 The club has decided upon the fate of the four players with contracts ending at the end of the current season: Christian Gentner, Ken Reichel, Grischa Prömel and Florian Hübner. The former two will leave Union at the end of the season, while the latter two have signed new contracts at the club, and will now continue to serve the club for a further two years.

Among the players to leave Union this summer, is veteran midfielder Christian Gentner. The 34-year-old German joined us on a free transfer this summer from VfB Stuttgart – where he had been active for a decade – on a one-year deal. Both parties have decided it was best not to add another year onto the contract.

Gentner himself had the following to say: “I’m enjoying life at Union, I really am, but I feel the tempo and level of the Bundesliga is simply too high for me these days. I don’t think I will retire yet, but rather look for a nice foreign challenge or a club in the 2. Bundesliga. So, this decision not to extend my contract was a mutual one.”

The former German international has not played all matches this season, but was certainly no permanent benchwarmer, with our Director of Football Oliver Ruhnert adding “we will need to look for a replacement for Christian, as his experience and quality will be missed. Without him, we’re lacking depth in central midfield.”

The other player that will leave behind An der alten Försterei this summer is another experienced player: Ken Reichel. The 33-year-old left-back, who has been with us since the beginning of last season, was an integral part of the promotion-winning team in the 2. Bundesliga. Before that, he spent over ten seasons at Eintracht Braunschweig, where he experienced their rise from Regionalliga team to Bundesliga side.

This season, Reichel has so far started 17 matches, which makes him a regular starter. Urs Fischer had the following to say on the decision to let him go: “of course, Ken has been a regular starter for us, but I think it’s time for us to attract a new, young, dynamic left-back.” Ken Reichel refused to comment on his departure at this time.

Two players did receive a new deal, one of them being Grischa Prömel. The 25-year-old has only started one match this campaign, coming off the bench a further four times. Despite the lack of appearances, the German defensive midfielder did clinch a deal that will keep him at the club until 2022.

We asked Urs Fischer why he chose to keep Prömel at the club: “Grischa is one of those types you really need within a squad: he’s content with starting fewer games, and he’s always ready to step up when he’s needed. Therefore, he’s an ideal player to have around. And perhaps he’ll start more games when Christian [Gentner] leaves us in the summer.”

Grischa himself added: “I’m really happy here at Union. Me and my girlfriend get to live in one of the best cities in the world, and I get to play for a club that is a very tight-knit community. I can honestly say I value my position here over playing every match for a club that I don’t have a bond with, and a city that I don’t like.”

The last player who had an expiring contract this summer, was Florian Hübner. Like Grischa Prömel, his contract was extended until 2022 by the club. And also like Prömel, Hübner has not been a regular starter for Union at all: he has started two matches in the Bundesliga this season, with six more appearances from the bench.

The 28-year-old centre-back joined Union from Hannover 96 for 500k in the summer of 2019, making 28 appearances in his first year at the club. This season, his position in the last line of Union has been taken over by Neven Subotic. Hübner: “it’s not nice losing your spot in the team, but instead of giving up and trying at another club, I want to stay at Union and try to regain my place.”

Oliver Ruhnert had the following to say: “Florian has been a great servant to this club already, as he played a big role in our promotion-winning team of last year. So, I’m happy he’s chosen to stay at the club, even now that his position has been taken over by others. He’s of great value to us, not just as a player but also as a person.”


Three other players will leave the club this summer, namely loanees Yunus Malli, who will return to VfL Wolfsburg, Marius Bülter from Magdeburg and Keven Schlotterbeck from Freiburg. It is not clear whether Union will try to sign any of these players permanently yet, with Oliver Ruhnert commenting that “we will consider our options in the summer.”

Ivan Obradovic, former Real Zaragoza and Partizan Belgrade player, has joined Beckenbauer's Eintracht Braunschweig for free. Because Real Zaragoza recently relegated, Obradovic had the option to leave on a free. The 24-year-old left back has played 20 games for the national team of Serbia, so he brings in a lot of experience to the German club. Obradovic will make around 16.5k per week, he has signed a contract untill the summer of 2016. Beckenbauer is pleased with his new siging, and has stated: "There will hopefully be many more to come, as we will try to improve the squad on the necessary positions." Obradovic is also happy that he was able to find a new club in under a month. 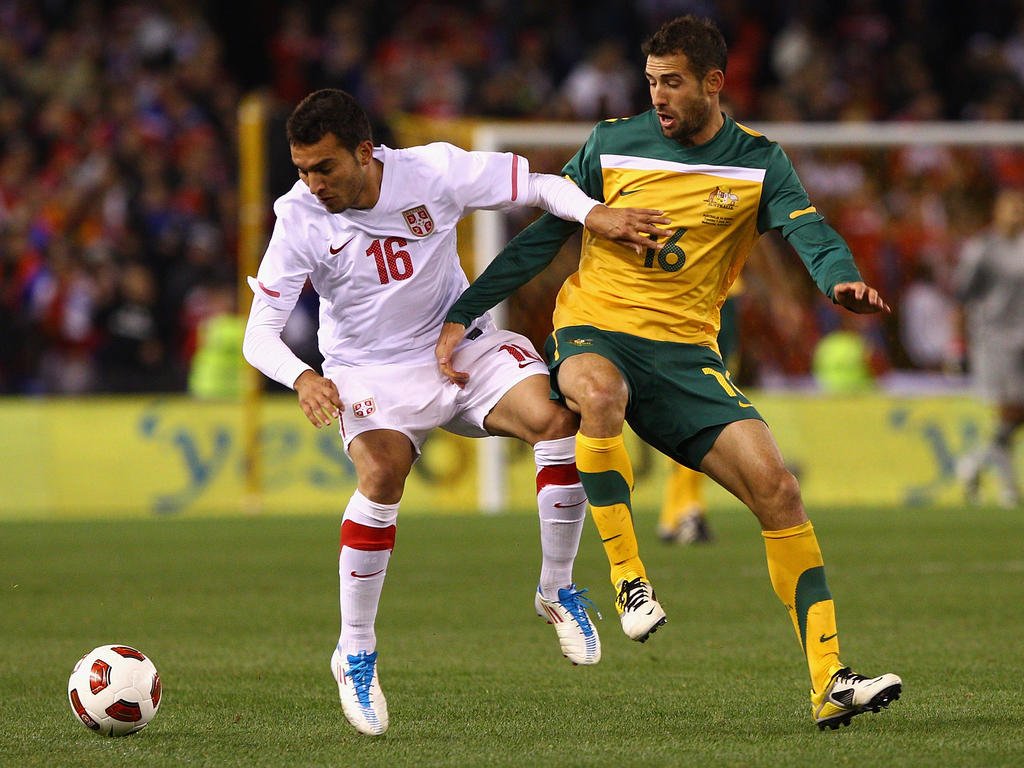 HSV defensive midfielder Tomás Rincón has joined recently promoted German team Eintracht Braunschweig, he has joined the team of manager Franz Beckenbauer for a fee of 750k. The Venezuelan midfielder will get a wage of 13k per week. Before Rincón joined HSV in 2009, he played in Venezuela for Zamora FC and Deportivo Táchira. The midfielder has said: "At HSV, I didn't get enough playing time, so I wanted to leave the club. Luckily, I got several offers, and the most appealing one was the offer of Eintracht Braunschweig. I hope that I can help keeping this club in the Bundesliga this season."

Eintracht Braunschweig, one of two newly promoted clubs, have announced their intention to start works on expanding their youth and training facilities. The club will start building at the end of this season, and the works will be finished on the 8th of October next year. The board has said this upgrade was necessary for the further growth of the club. The expenses of this project will be around the 2.5 million mark.
Login to Quote

Tallery
6 years
Nice work! Keep it up!
Login to Quote

Zed
6 years
tallery1164: Thanks! Hopefully I can stay up this season!
Login to Quote

Jer
6 years
Be aware that Rincon can get red cards very easily, but he's a good player. In a save, he constantly got red cards, and I had to sell him, as he put my team in jeopardy. Good luck
Login to Quote

Zed
6 years
Pauker: Thanks! Yeah, I think we might have a problem with that transfer actually :p At that moment I had just enough cash, but now I've extended some contracts, so I might not have enough money.
Login to Quote

You are reading "Eintracht Braunschweig: The Rise Has Begun".