You may recognize me as, 'that England international that wasn't even English and didn't play in England,' or ,'That awful signing Man U made in 2007,' but ladies and gentleman, I, am a god.

I retired at age 31 because, well, I couldn't really play anymore- my body is broken but my footballing mind, you see, is so fresh and young.

During my time as a professional footballer, I never had the opportunity to see the world, always too busy training, competing, or partying.

Thus, now that my career as a player is over, I feel I owe it to myself to see a bit of the world. Of course, I'm hoping to make some money while doing it!

I hope to complete these tasks in 25 years.

Warning- This is my first attempt at the famed Pentagon Challenge, bear with me...


Next Update- Where Will Hargreaves Land First?

Hargreaves, who last suited up for Manchester City in 2011-12, said he was, "Thrilled to be joining a club with such potential to do great things on the continental stage."

Dasgupta clearly stated the club's goals, beaming, "This is a club that is ready to return to the heights of continental play. We expect at the very least a 2nd place finish, but we must qualify for Asian club play this season. We know we are capable of that, and Owen is the man to lead us to our goals."

Hargreaves, who has never played professionally outside of England and Germany, admits his first foray into management will be tricky in a foreign environment. "I believe this club has a great set-up, and a great backroom staff which will help me make this transition as easy as possible. That being said, the Indian National League is a long ways from the EPL," he chuckles. "I'm up for the challenge, and I know my charges will be too."

Interestingly, Hargreaves has also signed on with the Indian Football Federation to manage the country's U-21 side. "Owen brings vast experience in the European game, and that is something we would like to pass on to the younger generation," said Praful Patel, the AIFF president. "We believe positioning him as a mentor for our younger players will bring them a certain tactical awareness and technique that cannot be taught by an Indian coach."

Hargreaves will have plenty of time to shape his East Bengal F.C. squad, as the Indian NFL season does not begin until late September. "I'll definitely be looking to strengthen my squad, once I get to meet the lads and form some proper opinions," chuckled Hargreaves.

The Canadian-born Englishman's first opportunity to manage will come in an international U-21 match in mid-August, as India will host Kyrgyzstan in Bangalore on the 13th. His U-21 squad will be expecting an easier game in early September, when they travel to take on the unrecognized Northern Mariana Islands' youth squad.


East Bengal F.C. play out of the gigantic Salt Lake Stadium in Calcutta, which seats roughly 120K. Last season, the club finished 3rd in the National Football League while averaging 70200 fans per game.

The club was founded in 1920 and turned pro in 1996, and has enjoyed a reasonable amount of success since. The Red and Gold Brigade, as they are affectionately known, enjoyed their best stretch in the early-2000s, winning three Indian titles (00-01, 02-03, 03-04) in four seasons.

The club fell on difficult times towards the end of the 21st century's first decade, with financial issues miring the club in a series of mid-table finishes.

East Bengal F.C. seem to have recovered, having finished in the Top 3 in each of the past three seasons. Last year they finished in 3rd place in the National Football League, with 47 points.

Sunil Chettri's brace led the Indian national team to a strong 3-nil victory over Bhutan in friendly action. A solid crowd of 2453 filed into Bhutan's National Stadium to support the lowly hosts, who sit close to the very bottom of the FIFA World Rankings. Wim Koevermans' India team ran out in an aggressive 4-1-2-2-1, and two goals from Chettri in the opening twenty minutes (5', 19') put the game to bed early. Final shots tallied 14-4 in favour of India, who will have gained little from defeating an opposition as weak as Bhutan.

At the U-21 level, former England star Owen Hargreaves made his Indian managerial debut, leading his side to a 1-1 draw with visiting Kyrgyzstan. Playing an aggressive 4-3-3, Hargreaves' team outshot Kyrgyzstan 21-4, but could not finish in the second half and paid the price. Thongkhoseim Haokip opened the scoring for India on 11 minutes, but Bekjan Kyugisov drew Kyrgyzstan level in the thirtieth, and neither team could find a go-ahead goal after that.

The U-19 side slumped to an unimpressive 1-1 draw with unrecognized Macau. While India did outshoot the visitors 14-6, they only mustered two shots on goal. Seminlen Doungel opened the scoring for India on 14 minutes, but an 80th minute penalty from Kok Tak Weng leveled the match.

The next international window comes early next month, with the youth teams in action on September 5th and the senior team in action September 6th.

The senior team faces a very difficult test, as they travel to Riyadh to take on Saudi Arabia. The U-21 team will travel to face the unrecognized Northern Mariana Islands, while the U-19 side will host Malaysia.

What a disaster. This international set-up is truly crap, and I'm not sure anymore if I'll be able to do anything continentally with India. The senior team was literally in a competitive game with bloody Bhutan- they're ranked like 200th in the world!

My U-21 team was poor against a poor team. We have enough talent to dispose of hard-working, if talent-lacking teams like Kyrgyzstan- drawing them at home is a joke. Mind you, the match as a whole was a joke! There were 240 people in a sixteen-thousand seat stadium...

In terms of my East Bengal F.C. squad, we had eight players feature in the three international matches for India at various levels.

Defensive midfielder Mehtab Hossein was without a doubt our best contribution to the national team in this phase, as he posted a 7.0 match rating for the senior team against Bhutan.

I started two of my East Bengal players for the U-21 side...'keeper Gurpreet Singh Sandhu struggled, allowing a poor goal, while right back Abishek Das was mediocre and I substituted him on 53 minutes.

All in all, it was not a promising start internationally.

I don't even feel like I need to prepare for a match against the 'Northern Mariana Islands'...the FA need to schedule better friendlies otherwise we'll never improve!

Griffo
6 years
Brilliant!! I will be following!!
Login to Quote

Walter
6 years
Good luck Carlos, hopefully you can replicate the success of Varzim!
Login to Quote

Jer
6 years
Great start, and you know that you'll have a fan here

@Walter Thanks buddy, I'm still loving your Oriental story! I know you can take the Primeira Liga someday!

@Pauker Thanks for following again, hombre.

Next update- A Rude Awakening
Login to Quote

dykie567
6 years
Looking forward to this, keep it up!
Login to Quote

I sit in my pristine office at the Salt Lake Stadium, aimlessly scrolling through yesterday's midweek EPL results. We've had a relatively poor pre-season thus far, with two victories against relegation favorites United SC (1-0) and semi-pro Aryan (3-1) and a pathetic draw against our own Under-18s.

Scrolling to the bottom of the page, I see that my former club, Manchester United, picked up a sound 2-0 victory away to Cardiff. Hey, they're undefeated through three games!


"Um, hello," I ask, thinly veiling my annoyance at having been disturbed.

"Owen! It's Pranab! What the hell were you doing, signing all these foreigners," our energetic president yells through the phone.

"What are you on about, Pranab," I ask, genuinely mystified.

"This is the INDIAN Football League- do you think you can just go around loading your team with foreigners," he pauses, hoping I'll catch on. "We can only have four foreigners! What the devil are you doing signing all of these Nigerians and Englishment?!?"

"Pranab, breathe. We'll sort it out- we can sell them at half-value or something before the transfer deadline," I hurry, grasping at straws.

"Owen, I know you're new here- but are you mentally incapacitated? The transfer deadline was twelve days ago! I'm due to register our squad today, and we've got seven foreigners- we can only register four! This is your first and last warning, Owen. Figure your shite out or we'll be forced to relieve you of your duties," he snaps before crisply hanging up.

What the...foreigner limit. Nobody told me a word about that. Not the players, not my assistant manager...nothing. Well, I guess I've got to pick my four foreigners:


Unfortunately, this embarrassingly leaves three of my foreign pre-season signings out of the squad for the duration of the domestic league season; James Moga, a striker from South Sudan, Jack Greenaway, a young 'keeper from England, and Daniel McCann, an old midfielder from Australia.

What an embarrassment this first pre-season is turning out to be, I think to myself. We've got one more friendly against the 'West Bengal Police', an amateur side. After that, we're at the mercy of the Indian League's notorious parity.

Oh, I nearly forgot- we lost two-nil against the 'Northern Mariana Islands' in my second game in charge of the Indian Under-21 side...sigh.

I plan on playing 'three at the back', simply because our outside backs are terrible. I'm also trying to use the flanks because our central midfielders are nothing to brag about. 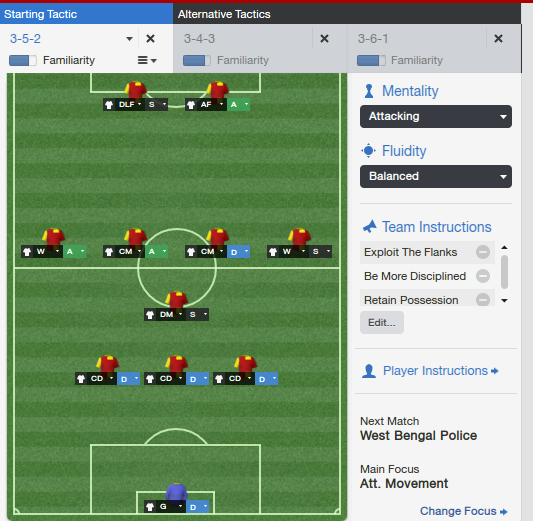 Griffo
6 years
I am really enjoying this, good luck!
Login to Quote

Cameroncox96
6 years
Good luck mate, always been interested in trying the pentagon challenge, so I will be keeping a close eye on this story

CarlosV96
6 years
@Griffo Thanks mate, it's something new and different for me. I've personally found that when my stories get overly plot-based, I lose interest (or the save just craps out for whatever reason, which is doubly frustrating when I put time in on the story).

@NVDTahir Thanks buddy, Asia as a whole is a section of the game (in FM and in real life) that I've never really explored, especially India. So I'm diving in head first for better or worse!

@CameronCox96 Cheers mate, it's my first attempt so I'm hoping not to cock it up too badly!

@Pauker Yeah...I had no clue. Never even managed in Asia before in-game, let alone India! Sigh.
Login to Quote